Data from this report on consumer interest levels was provided to us from NordVPN, and U.S. consumer usage data comes from our annual report on VPN usage. 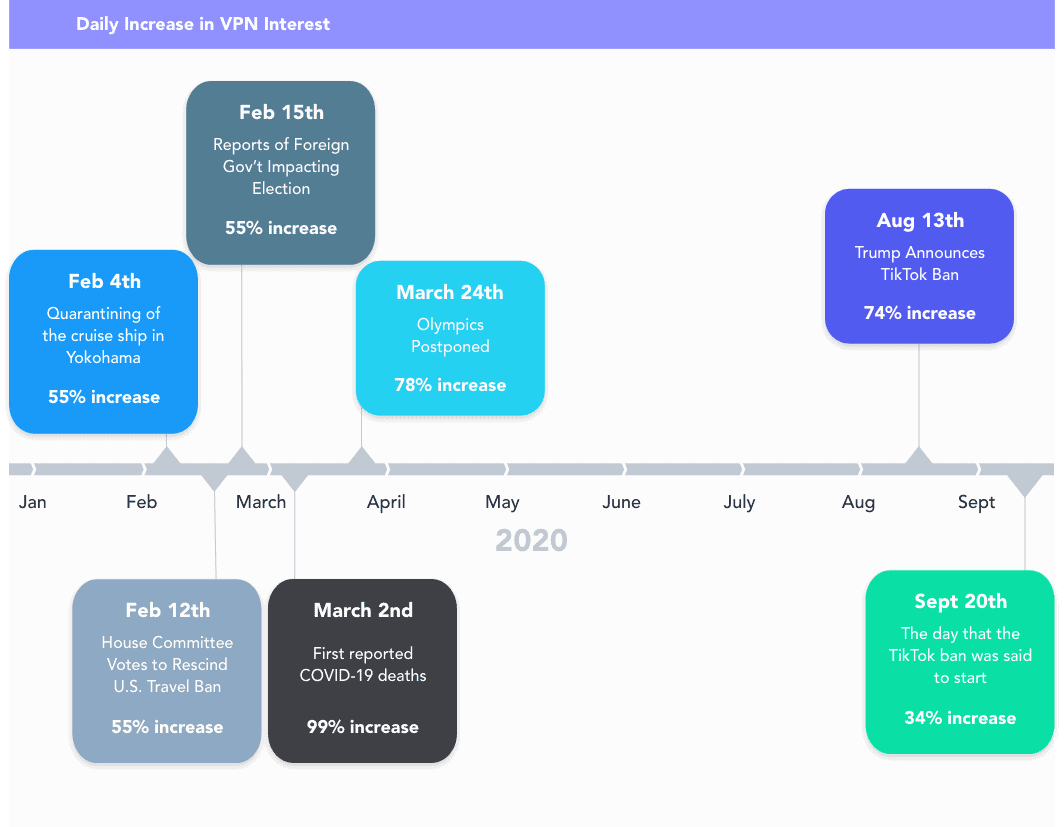 Why VPN Interest Spiked in 2020

Data shows that interest in VPNs spiked with various news events throughout 2020, indicating that people were gearing up for government censorship and stay-at-home orders. The data was calculated by measuring the amount of web traffic in a day compared to the average of a week prior to the date, an effective measure of increased consumer demand for VPNs. Even with additional marketing efforts taken into account, spikes in interest correlated with events such as the first quarantined cruise ship in Yokohama, the first COVID-related deaths, and the proposed ban of TikTok, among others.

As the threat of internet censorship increased, so did the average consumer interest in VPNs. By changing a device’s IP address, VPNs allow users to access the internet on another country’s servers, bypassing government or geo-restrictions. Accordingly, there was a 74 percent increase in average consumer VPN interest on August 13, the day that President Trump first said that he might ban TikTok1. Later, on September 20, the day that TikTok was set to be banned in the U.S, VPN inquiries increased by 34 percent.

Similarly, President Trump’s proposed travel ban on Muslim-majority countries2 also correlated with increases in the average VPN interest for consumers. As VPNs would allow people in countries with high levels of internet censorship to bypass firewalls, there was a 55 percent increase in interest in mid-February. Our own consumer research has shown that nearly one in 10 U.S. adult VPN users highlight whistleblowing, activism, or bypassing government or organization restrictions as a reason for use.

Indications of the severity of the COVID-19 pandemic and thus, stay-at-home orders, also led to large increases in consumer VPN interest throughout 2020. By encrypting a user’s device IP address and web activity, people used VPNs to secure their home networks after learning they’d be working remotely. Digital privacy expert Daniel Marksuon explains, “When the Olympics were canceled and the cruise ship got quarantined, people must have realized that the virus began to spread. They saw how cities in China got locked down and rushed to acquire protection tools that would help them to continue with their life and work at home in the most secure way possible.”

FYI: Interested to see how our best VPN picks faired when we reviewed them? If so, head on over to our ExpressVPN review page, our NordVPN review page, and even our IPVanish review page for the most up-to-date information on these brands.

Accordingly, there was a 55 percent increase in average consumer VPN interest on February 4, the day that the first cruise ship, the Diamond Princess, was quarantined at Yokohama3. About a month later on March 2, the first deaths due to COVID-19 were reported, leading to the largest increase in VPN interest of the year of 99 percent. Later, on March 24, it was announced that the Olympics were postponed4, causing a 78 percent average increase in consumer VPN interest. At this point, the majority of the U.S was under stay-at-home orders and working remotely, leading to more of a need for VPNs to secure home networks.

The correlation between the average increased consumer interest in VPNs and 2020’s tumultuous events suggests that VPNs are used for a variety of reasons, including bypassing government censorship and protecting sensitive business information. “Whenever a government announces an increase in surveillance, internet restrictions, or other types of constraints, people turn to privacy tools,” Markuson continued. Although there wasn’t a surge in interest at the storming of the Capitol, as the COVID-19 pandemic continues into 2021, it’s expected that average consumer interest in VPNs will continue to increase as well.

Not everyone uses VPNs, and many people aren’t sure of what they are in the first place. Below you’ll find the answers to the VPN-related questions we get most frequently.

Can you be tracked if you use a VPN?

Whether or not you can be tracked if you use a VPN depends on the VPN itself. The best VPNs, with AES-256 encryption, strict logging policies, and headquarters in Five Eyes non-member countries, hide the user so they can’t be tracked. By replacing their IP address with a new one and encrypting their web activity, the user is essentially anonymous online.

Should I use a VPN at home?

You should use a VPN at home if you would like to:

However, unlike on public Wi-Fi networks, using a VPN at home isn’t necessary 100 percent of the time.

In the U.S., VPNs are not illegal. However, some countries ban VPNs, such as:

How do I know if a VPN is working?