Though it’s still perceived as one of the most trusted institutions in the country, the public’s trust in law enforcement has been shaken over the past few years. According to Gallup, the percentage of people with a favorable view of the police has fallen by 7% since 2017 and stands near the levels seen just after the Rodney King verdict.

While trust in law enforcement may be fluctuating, the police still have the third-highest approval rating of all institutions, behind only the military and small business. Plus, being an officer remains one of the most oft-cited childhood dream careers.

We’ll compare data on income, safety, employment and cost of living to determine which cities lead the way for police and which ones officers may want to avoid. Jump to the bottom of the page to see our detailed methodology.

The median annual wage for police and sheriff’s patrol officers, the occupation that most police officers fall into, is $61,380, which is far higher than the total median annual wage for all jobs, which is $38,640, according to the U.S. Department of Labor. But this figure varies pretty dramatically, depending on where in the country you’re looking.

For instance, police in Hammond, Louisiana make just over $30,000 a year, while cops in San Jose, California earn wages in the six figures. 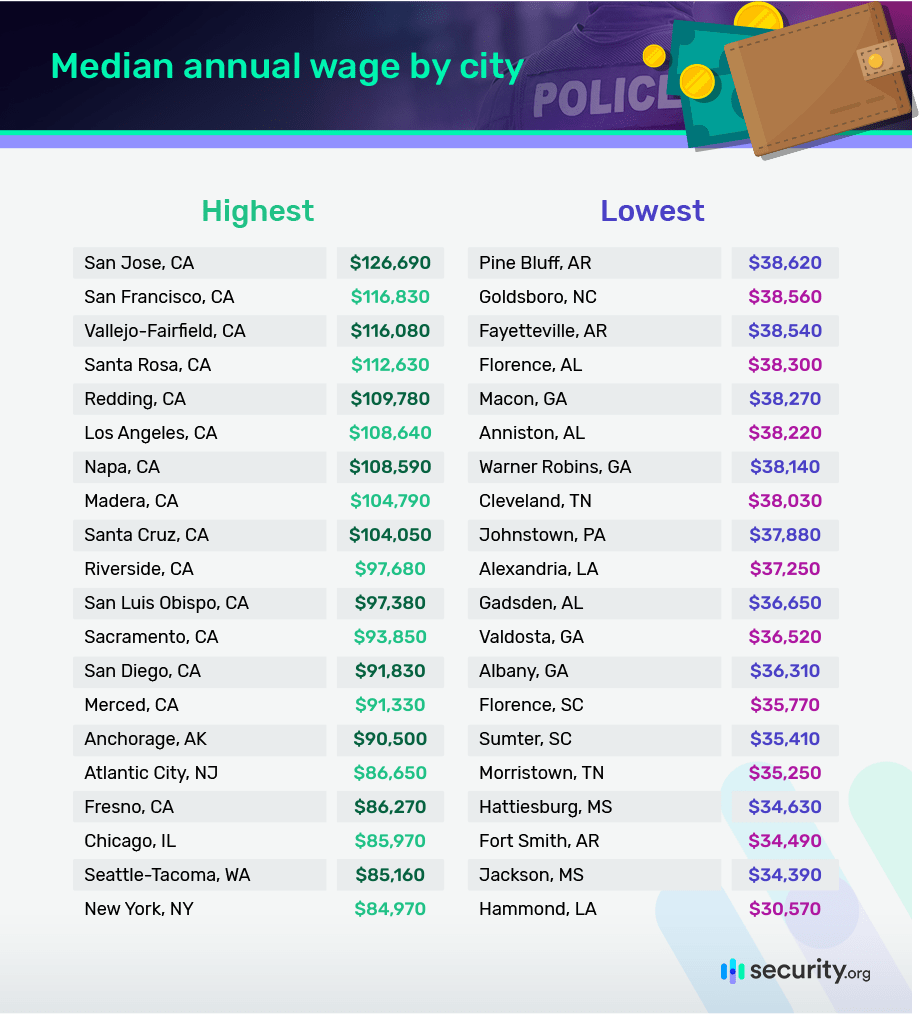 Perhaps not surprisingly, the 14 highest-paying cities for police officers are all in California, so let’s take a look at the list without those cities. 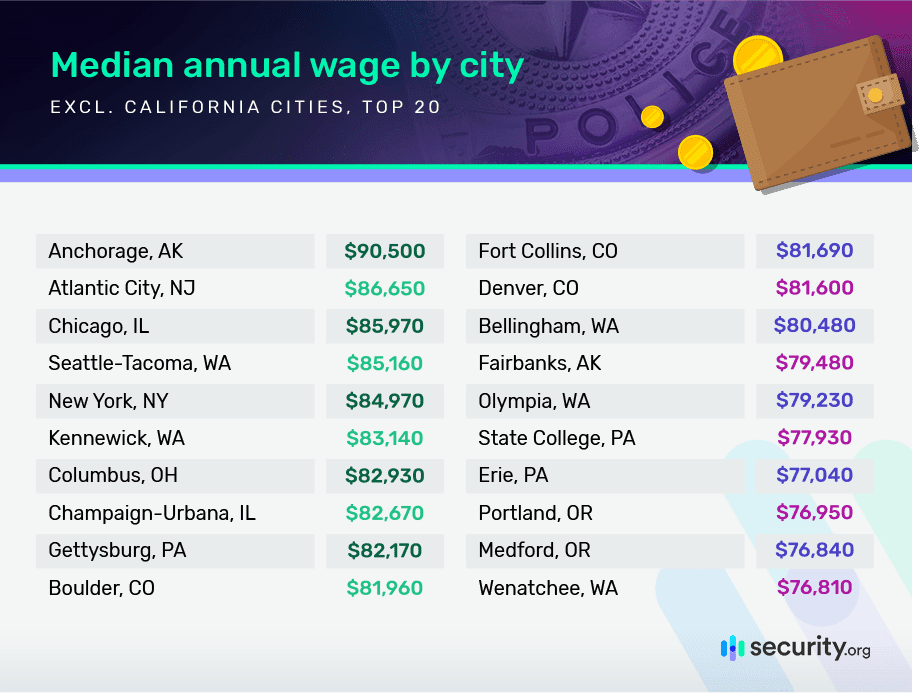 In 2018, more than 100 law enforcement officers were killed either accidentally or intentionally while attempting to perform their duties, according to data from the Federal Bureau of Investigation. While the number of officers killed illegally in 2018 represents an increase from 2017, that figure is down from a high of 72 in 2011.

Four states — Rhode Island, South Dakota, Vermont and Wyoming — and the District of Columbia had no accidental or intentional killings of police officers between 2014 and 2018. 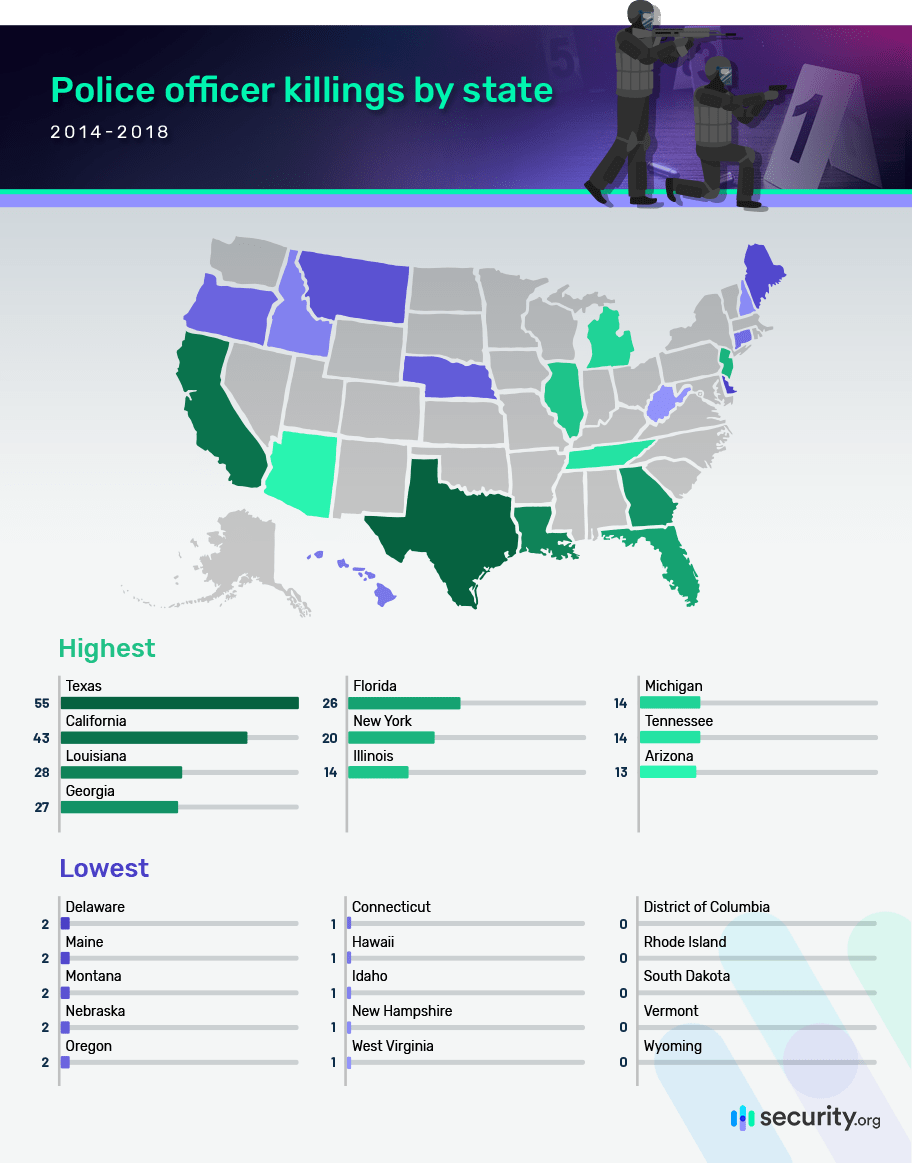 The FBI’s data does not specify in which city each officer was killed, but by comparing state-level data on killings of law enforcement officers with employment levels of police in each city, we can paint a picture of how dangerous being a cop in each town is likely to be. 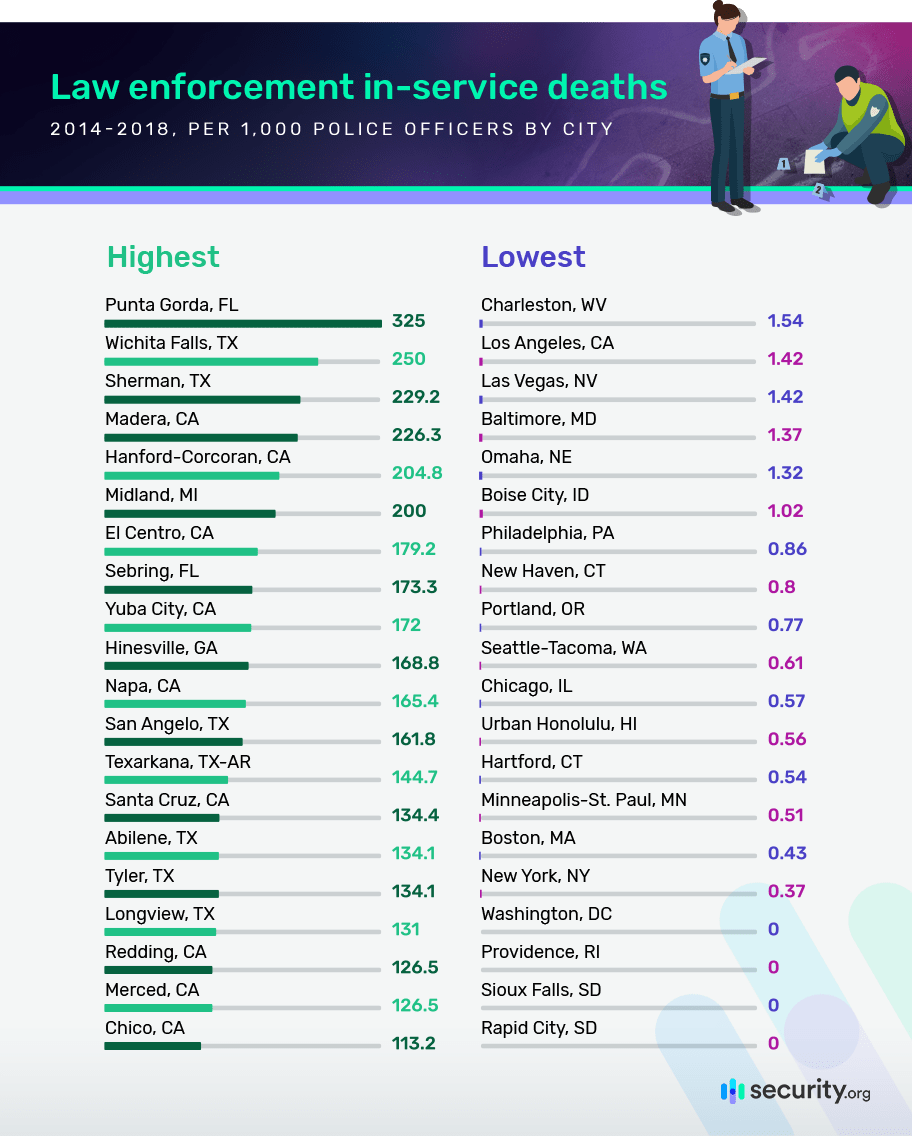 Availability of jobs is one of the biggest aspects to considering where to begin or continue a career. Among the 300-plus cities on our list, the average town has nearly 1,700 police officers, ranging from the 54,000-plus employed in the New York metro area to the few dozen employed in Midland, Michigan. 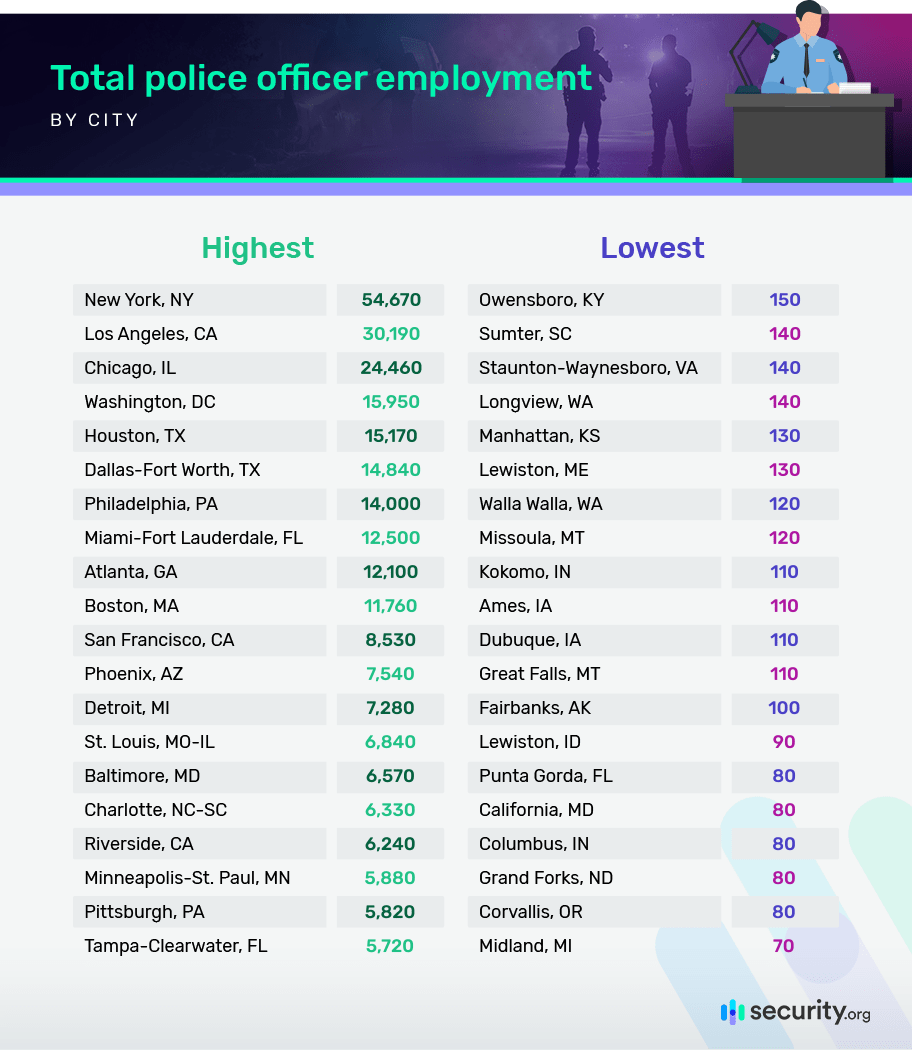 Another way of understanding the prevalence of jobs is to factor in overall employment in an area. In other words, which cities have the highest concentration of police jobs? 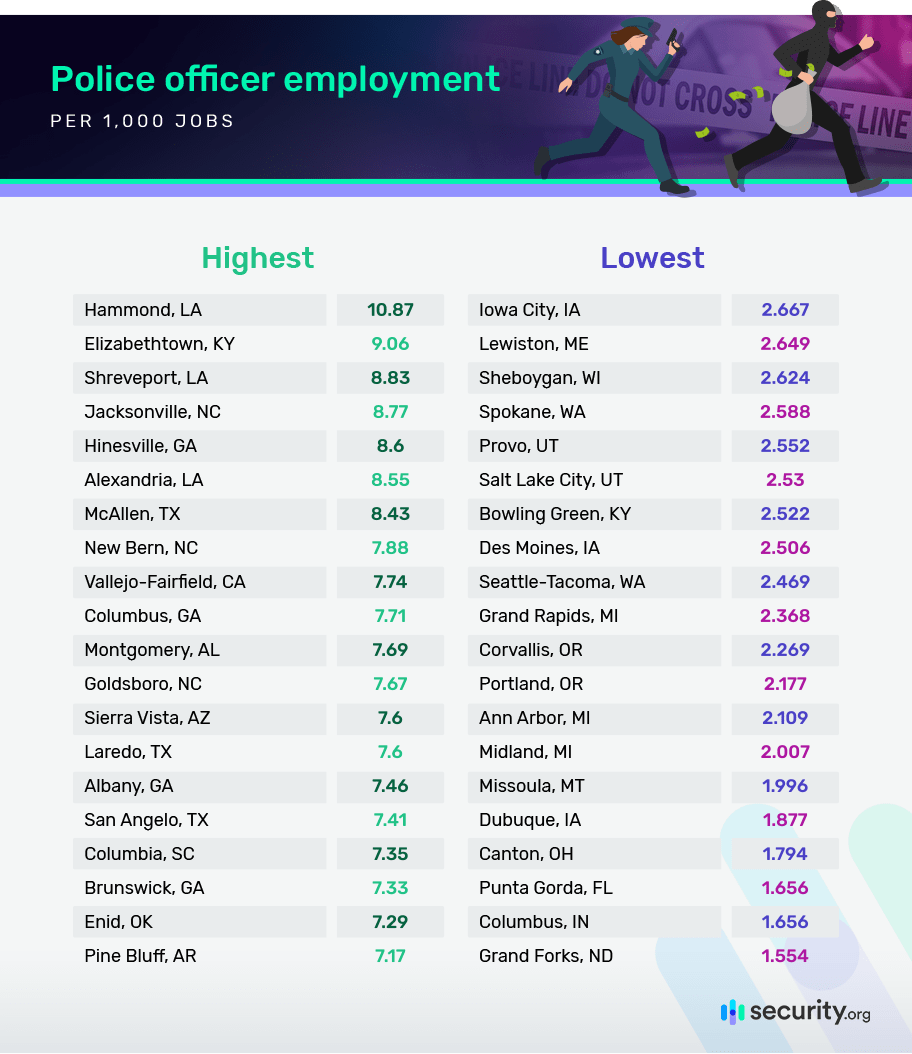 Finding a safe job that pays well is only part of the battle — now comes the time to actually spend the money you earn. A key marker of cost of living is the price of rent in an area. We’ve all heard horror stories about $5,000-per-month San Francisco studio apartments, but what does the data say today about how expensive various cities are? 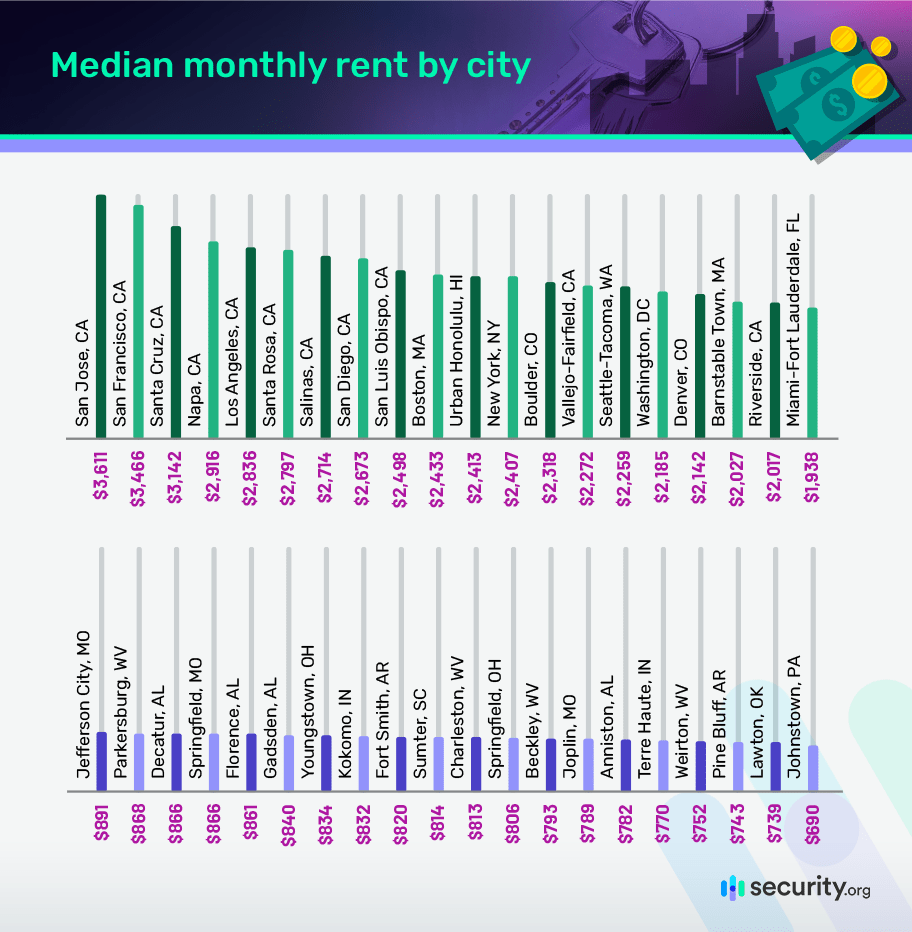 How far will a cop’s salary go in each of our cities? Yes, the top of the rent list is dominated by California cities, but many of those same cities top the salary charts, too, so which cities provide the best balance? 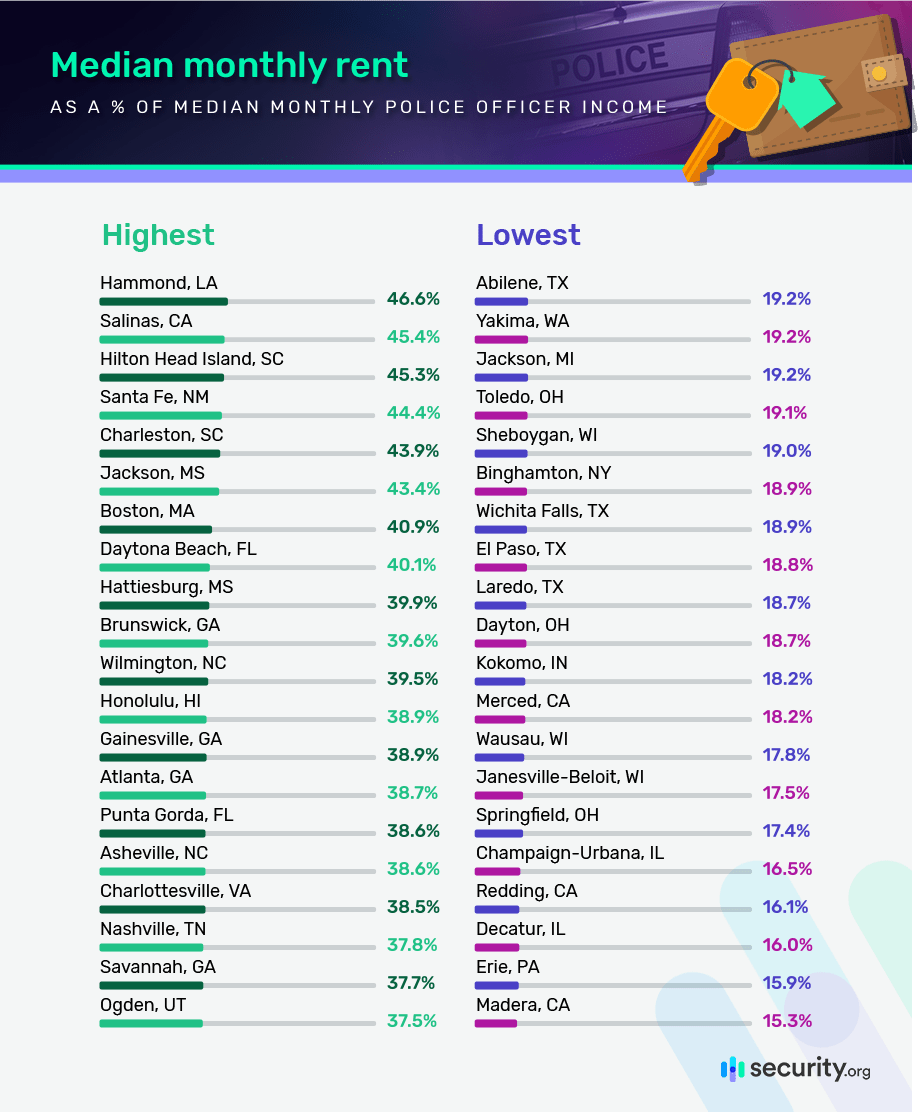 So which cities provide the best of all worlds for police officers — and which provide the worst? To rank our 300-plus cities, we took the data we’ve shared already and ranked each city from best to worst (which is not always highest number to lowest number). Each city was then assigned a number depending on how it ranked among all the cities, and those numbers were totalled to create an overall ranking for each city in which lower numbers equate to better quality of life for police officers.

Our lowest score was 377 (Pittsburgh, Pennsylvania) and our highest was 1,434 (Punta Gorda, Florida). 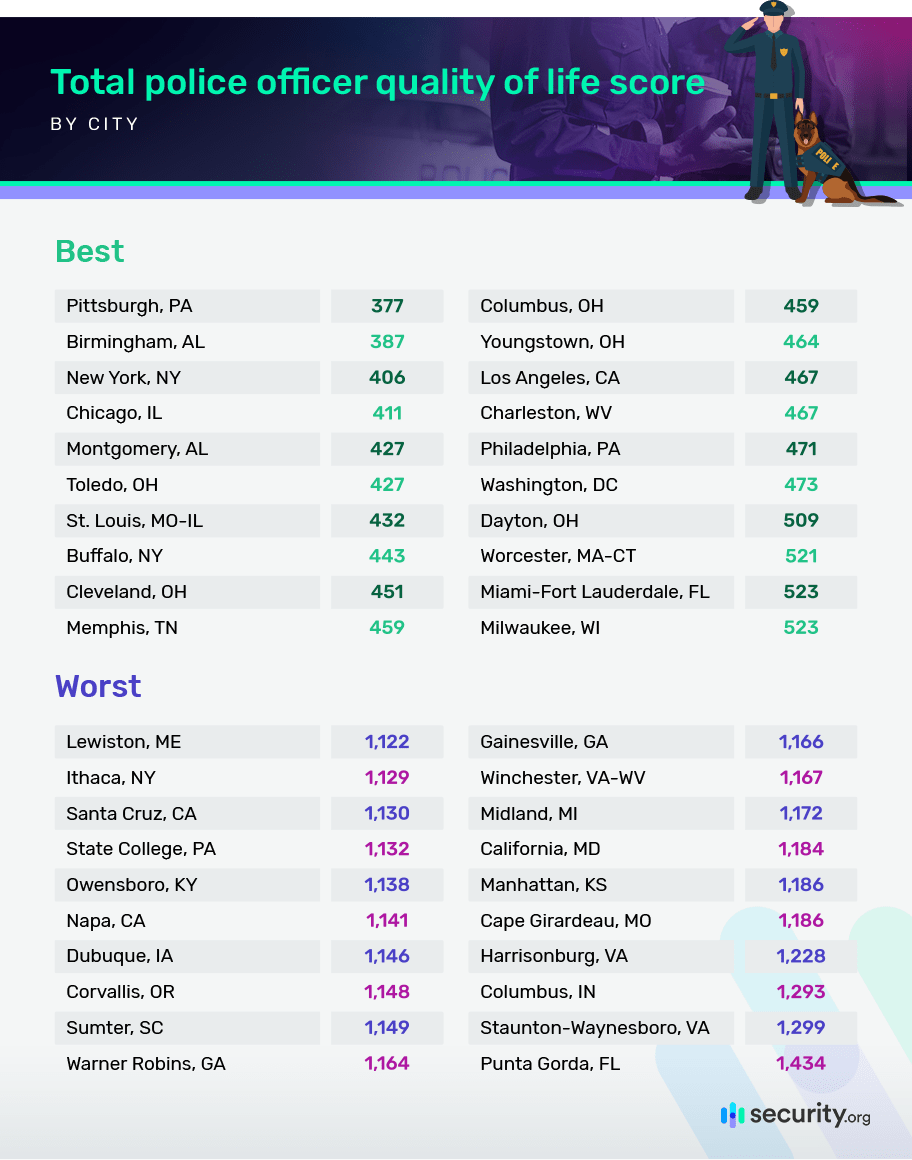 Life as a police officer is routinely a thankless one, and it’s sometimes a very dangerous one. Not only that, but officers are regularly used as political props for individuals on all sides of the ideological spectrum. For the police officers who got into law enforcement for the right reasons — protecting the public and serving the common good — these negative aspects can be taken in stride. But, as we’ve seen quite clearly, life for police officers is not exactly the same across the country, and a few cities seem much more attractive for the average cop.

To quantify which cities are best and worst for police officers, we examined data across several areas, including income, safety, employment and cost of living. As mentioned, the overall ranking of cities was done by creating a 1-318 ranking in each category, adding each city’s rankings together and comparing them.

Income: Our data included monthly income by city for police and sheriff’s patrol officers, and these figures were compared to monthly rent costs in each city. Wage information for Champaign-Urbana, Illinois, Clarksville, Tennessee, Decatur, Alabama, Madera, California and Tucson, Arizona was unavailable, so for overall state figures for each city were substituted. Data on income and employment was gathered by building custom tables via the U.S. Department of Labor’s Bureau of Labor Statistics Occupational Employment Statistics Query System.

Safety: In this area, we included figures from the Federal Bureau of Investigation on law enforcement officers killed in the line of duty, whether feloniously or accidentally, over the past five years. This information was published in 2019 and can be accessed here. The FBI does not provide this information by city, so in each case, state-level figures were substituted. In addition to the number of law enforcement officers killed in each state over the past five years combined, we included the number of officers killed per 1,000 officers employed in each city.

Cost of living: In this area, we consulted the Zillow Rent Index database, which is a measure of the median market rent in each city, and this figure was used on its own as well as being compared to monthly wage figures.

The information and images on this page are free to share for noncommercial purposes. If you wish to distribute any of the information contained, please provide a link back to the URL of this page to ensure proper credit is given.