We've been testing and reviewing security systems for 5 years. Each year we select the top systems based on reliability, flexibility, smart home integrations, and of course, affordability.

Editor's Rating
9.6
/10
The biggest name in home security for all the right reasons. Their professional installation is fast and flawless. And their security systems deliver priceless peace of mind. Welcome to reliable home security and automation.
View Packages
Read Review

Best for Installation and Convenience

Editor's Rating
9.4
/10
Vivint lets you choose between 24/7 professional monitoring and self-monitoring through the Vivint Smart Home app, which is highly rated for both iPhones and Androids.
View Packages
Read Review

Editor's Rating
9.0
/10
Cellular backup ensures that Alder systems stay on all the time, even if there’s a power outage in your neighborhood. Believe us, this isn’t always the case for smart home security systems!
View Packages
Read Review

Editor's Rating
7.9
/10
Deep Sentinel’s artificial intelligence is able to distinguish suspicious actions from people on your property and a live agent will intervene if necessary.
View Packages
Read Review

At Security.org, we tested all the best options 2021 home security had to offer. These included a variety of choices such as DIY security, professionally installed and monitored systems, integrations with Alexa or Google Assistant, and plain old local alarms for more tech-averse people. We found lots of scalable options to choose from for homes and businesses of all sizes. We tested out each security system personally to make sure they were reliable.

We determined our favorites based on each system’s reliability, flexibility, smart home integrations, and, of course, affordability. Our top picks included newer brands like SimpliSafe and abode as well as products from more established security companies like ADT, Deep Sentinel and Frontpoint.

A Detailed List of the Best Home Alarm Systems 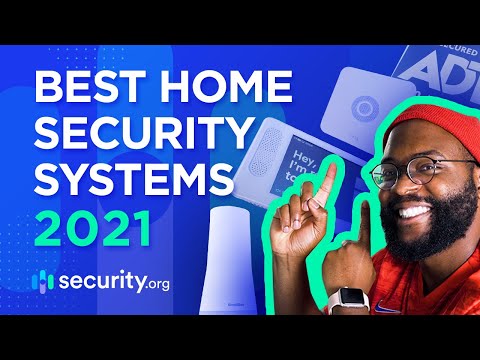 How We Determined Which Security System is The Best

Buying a home security system required us to consider a ton of factors, from the costs of equipment to the quality of the devices. How did we decide which security system was right for our home? Below, we included info about how to choose a fitting security system and a methodology section, where we detailed how we tested and reviewed our systems.

Why Buy a Home Security System?

The first question we asked ourselves was whether or not we actually needed a home security system at all.

We wanted to know exactly how common home burglaries were and if home security systems could really decrease the likelihood that we’d be robbed? To answer these questions, we turned to the hard statistics on burglaries in the United States; here’s what we found.

Knowing that most security systems offered contact sensors for doors and windows as well as motion and glass break sensors, we thought having these simple sensors may have stopped these convict’s robberies before they started. Video doorbells, a part of some smart security systems, allowed homeowners and renters to see and speak to whoever was at their front door from a mobile application. We realized if the victims had these, they would have always been able to respond to the door, whether or not they were at home. We liked the idea that at our home we could seem like we were there when we were away.

We believed security cameras could have made a big difference in the amount of evidence available from these robberies. Besides material losses, burglaries caused psychological harm to victims. In sum, we concluded that every family, including our own, could benefit from a home security system’s ability to help prevent crime or stop one midway.

After testing out dozens of systems, we firmly understood and agreed with their advantages:

Tip: To save up to 15% on your homeowner’s insurance, get a security system to protect your home from burglaries.

We recommended considering the following factors before buying a security system:

Taking these three steps before we decided on a security system made an enormous difference for us, and we recommended others do the same.

Before we selected our system, we:

Methodology: How We Ranked Security Systems

There were dozens of factors we considered when reviewing home security systems, from how well they worked in our testing to costs. While this list was by no means comprehensive, it provided us with a general overview of what to consider when deciding which home security system was right for us.

First, we looked at the equipment that was available on a company’s website, which usually included some combination of the items on this list:

We preferred companies that offered a wide range of devices, so could create a kit customized to our home. Of course, we also cared a lot about the quality and features of the devices, such as:

We also liked companies that offered packages, discounts, and scalability, meaning we could add more components as we went along. Flexibility was key.

Most systems had two options for monitoring: self-monitoring, meaning we looked after our own system via live streaming, notifications, and remote control, or 24/7 professional monitoring. With the latter, not only did we have access to our system, we also had a team of people available at all hours to respond to any alarm going off. If we weren’t able to respond for whatever reason, be it work or a vacation, the monitoring team was able to verify the emergency and call the police for us, if needed. We always recommended getting professional monitoring, although it usually required a monthly fee.

Whether it was our Alexa and Google voice assistants or other IoT devices like smart lights, smart locks, or smart thermostats, we liked security systems that allowed for voice commands and home automation.

Here, we broke down the costs we suggested anyone buying a security system consider:

During our testing, smart security required a connection between all of the system’s components, its base station or hub, and its mobile application. Typically, this came in the form of Wi-Fi, but some companies we explored also offered cellular or landline backup in case our power went out. Also some devices we tried needed to connect over  ZigBee or Z-Wave protocols, which sometimes required an additional hub. We looked for systems with cellular backup, ideally included for free, although it was usually part of the monitoring cost.

We asked that question everyone wanted to: Could our home security system be hacked? Unfortunately, the answer was yes. All smart security systems could potentially be hacked. But the truth, which we thought was quite eye-opening, was that anything that used the Internet was potentially hackable. As a result of this information,  we committed to adhering to the best digital security practices. That was why we looked for companies that offered two and multi-factor authentication for us to sign in to our security accounts. We also investigated each company’s history of security breaches, as we wanted to keep our private footage private.

When it came to a security system’s mobile application, we wanted something that let us easily livestream footage, control our system remotely, and get notified whenever alarms went off. One step we took to find this was we made sure the app had a high rating on either the Apple or Google Play store.

Finally, we took into consideration how long the business had been around and what other customers thought of their systems on Amazon and Google. However, our reviews were completely our own and based on our own testing experiences.

Security.org’s Chief Editor Gabe Turner and Senior Staff Writer Aliza Vigderman did all of the research and testing necessary to make the most comprehensive security reviews online. Here’s a little bit of background information on each of them.

Gabe Turner is a home security and digital security expert based in Brooklyn, New York. A former attorney, Gabe spent years testing out everything from home security systems and cameras to digital security products like VPNs and identity monitoring services. Watch him test products on Security.org’s Youtube channel with 30,000 subscribers.

Aliza Vigderman is a technology journalist also based in Brooklyn. Previously, she wrote for outlets like the Huffington Post, Degreed.com, and SquareFoot. She was also a research assistant at the Schuster Institute for Investigative Journalism in Waltham, Massachusetts. At Security.org and its predecessor Security Baron, Aliza wrote about home security, digital security, and smart home technology exclusively for about two years.