Tough as nails, professional-grade security cameras for home use. 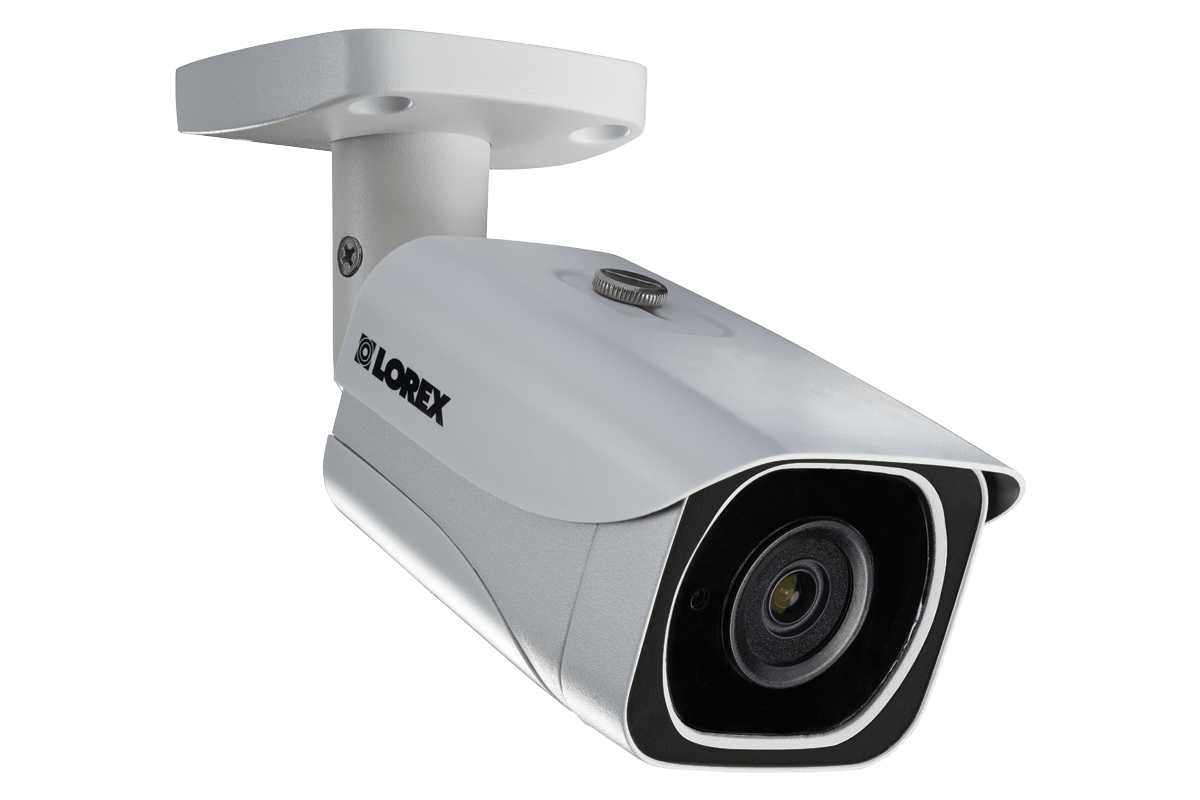 With tough as nails security cameras, Lorex is a brand that businesses across the nation trust to protect their establishments, but did you know that you can have the same rugged security cameras for your home?

In this review, we’ll take a closer look at one of the Lorex options available for home security, the 4K Ultra HD Lorex camera pictured below, which cost us just $119 — a good price for a mid-range outdoor camera.

Of course, price is only secondary to the quality and features of the camera. So we took Lorex for a spin to test if it could, indeed, protect our home. Ready to see what it can do?

Of course, writing about a camera’s video and audio doesn’t really do it justice. For this reason, we made a video review of the Lorex 4K camera system, showcasing its video display throughout the day and night as well as its audio, smart platform integrations and more.

Check out another camera system from Lorex; this one shoots in 2K instead of 4K.

The Beginning of Our Process

Lorex had a ton of security system options on the home page, which is why we felt a bit overwhelmed right off the bat. But eventually, we found our footing and located the “Beginner’s Guide To Lorex” in the middle of the homepage, which was extremely useful; we recommend starting the process there. Lorex is always offering specials so we decided to go with the deal of the day, which at the time of our purchase was the 4K Ultra HD 8-Channel security system. This deal really does change daily, so keep an eye on that as you peruse their website.

Ultimately, we decided to order online directly from the Lorex website which was incredibly easy. Because the system we ordered was in stock, it shipped out in one business day and arrived at our home about a week later. When we got our package, we immediately opened the box which included:

We unboxed and tested it out, and here’s what we thought of the system’s features.

Storage With The One TB Hard Drive

One of the primary concerns when buying a security camera is where all the footage will go. Typically, you’ll need to pay a monthly fee to keep videos in the cloud, unless there’s a microSD card slot in which you can plug a microSD card for local storage.

The Lorex system we tested took a more traditional approach. It came with a Digital Video Recorder (DVR) that housed a one TB hard drive. With that much storage space, we could store approximately 500 hours of video or about 20 days worth of continuous recordings. Of course, that storage space will be shared among your cameras, so the allotment for each camera will be, for example, five days if you have four cameras.

You can actually expand your DVR storage space if needed. You can hook-up up to three more hard drives. Be warned, though: It won’t come cheap. A one TB hard drive can cost up to $200 each depending on the brand, so keep that in mind when studying Lorex’s pricing.

Aside from expanding the storage, you can also connect more cameras to the system. Ours came with four cameras, but since the DVR has eight channels, we could add four more to make it eight. If that’s not enough, though, there are 16-channel systems available, as well. Just remember to check the camera and the DVR’s compatibility, and also, that DVRs with more channels typically cost more.

4K video is all the hype these days, and Lorex is riding the wave. Of all the brands we’ve reviewed, Lorex seems to have the widest selection of 4K Ultra HD cameras. But what exactly does having 4K cameras mean to consumers like us?

Well, the most obvious significance of 4K cameras has to do with their video quality. Images from a typical 1080p HD camera consist of about two million pixels, while with a 4K camera, that figure quadruples to about eight million. Usually, more pixels equals greater picture quality.

From a security perspective, a better image quality results in more detailed videos. You know how in movies they can zoom in a camera’s feed and read license plates of fast-moving getaway cars? It’s kind of like that with Lorex. Since the 4K camera contains more pixels, you can digitally zoom in several times and still identify smaller details. We’ve proven that in our tests, as you can see in the sample image below.

We’ve been singing the praises of Lorex. Now it’s time for a little bad news. There was really no way to get these security cameras to blend in with our home. While that didn’t bother us, it is important to note the design of these cameras was very bulky; think street corner or storefront cameras. That’s typical with Lorex security cameras, but there are quite a few with nicer aesthetics. We suggest looking at Lorex Wi-Fi cameras if design matters to you.

One good thing about the cameras we bought, though, was that they could withstand harsh outdoor weather elements, working in temperatures anywhere from -40 to 131 degrees Fahrenheit. Basically, they could work in the coldest of winters and hottest of summers, which was a great feature for us since we wanted eyes on our entire property throughout the seasons. We don’t ever have to worry about bringing the cameras indoors even during rain or snow, as they were completely protected from dust and water jets. When we got our system we sprayed it with our power washer to test this feature out. To our satisfaction, it held up perfectly!

Some of our other favorite features of the cameras were:

One thing to keep in mind if you’re planning to buy a Lorex camera system is that the installation process can be challenging and time-consuming. It’s doable, but you’ll need a little patience, and here’s why.

Let’s start with the DVR. The DVR is essentially a computer box that needed to be placed near our router. So first, we had to free up some space on our shelf. But once we booted up the DVR, it started up nice and smooth.

Next, we have the cameras. All four cameras we received were indoor/outdoor types, but we decided to keep them all outdoors for perimeter security. After all, they looked too bulky to fit into our not-so-spacious living space. The main challenge was figuring out how to manage the wires. Each camera had two wires: One going to the DVR, and another going to a wall outlet. We had to get creative, which meant drilling, snaking wires through the ceiling, and using an all-important tool of the trade tool to keep the wires out of our way: duct tape.

Eventually, we got things done but after installing the cameras and the DVR, we still had questions about how to connect our system to the app. That was when we decided to call customer support. We also had the option of live chatting with a customer service rep on the Lorex website, but we felt that would be more time consuming. We were hopeful our representative would answer our questions, but honestly, we didn’t get the kind of service we expected. The representative we spoke with was a bit short and didn’t seem interested in helping. He did eventually help us set our system up, but it wasn’t the most professional experience we’ve ever had.

Because our Lorex system was self-monitored, having a decent app was key, since that’s where we viewed our livestream and received notifications. The Lorex app worked on all devices, which was great because we used both Apple and Android products in our household. Once we downloaded the app, we got push notifications, saw both live and recorded video and grouped cameras together. For example, we grouped together our outdoor front cameras and outdoor back cameras which made it possible to livestream multiple cameras at one time. This made the self-monitoring portion simple when live streaming because we had eyes on multiple places simultaneously.

You Should Know: The mere presence of security cameras could deter an intruder, so install the cameras in a visible location.

We’ve all heard the saying “you get what you pay for” and that’s the case with Lorex. Because of the wide variety of systems, there are a wide variety of prices. Our system was on sale for $387.99 but normally costs $699.99.

One of our favorite things about Lorex was there was no mandatory monthly fee. While the initial investment may feel like shelling out a large chunk of change at one time, many other security companies require long-term contracts and monthly fees even after the initial equipment costs. Some don’t even store footage unless you pay for a cloud subscription. The Ring cameras we reviewed, for example, require a $10 monthly fee to store videos from the entire camera system. But not Lorex; once we paid for the product we were done. Of course, that wouldn’t be the case if we sprung for the unlimited cloud storage, which broke down to $3.49 a month, but we opted out.

Lorex has the most equipment options available on the market. Explore their packages.

Lorex was a good option for us. We loved the clear video and lack of lengthy contracts and monthly fees. But because there was no professional monitoring option, this system’s best for someone who lives in a gated community, an apartment with a doorman or somewhere with other security measures in place. Otherwise, you may get stuck in a situation where you’re unable to call the police for whatever reason, but for someone looking to avoid monthly fees, Lorex is a great option.

Looking to compare Lorex to other security camera options? We have you covered.

Once you pay for your Lorex equipment, there’s no more additional fees. Figure out your options here.