How Much Does Surfshark Cost?

Surfshark is one of our top choices for VPNs, and its pricing can’t be beat. 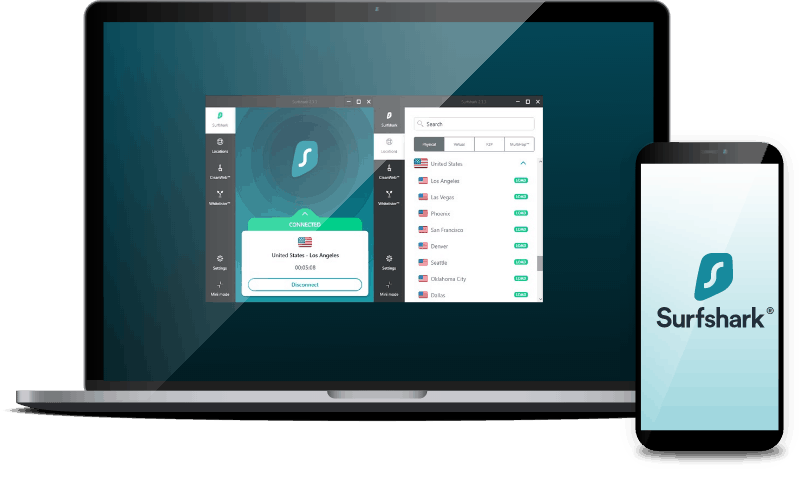 Surfshark is a well-rounded VPN. It’s fast and secure, it has innovative privacy features like NoBorders Mode and Camouflage Mode, and it can give you access to international Netflix libraries through its streaming-optimized servers.

Surfshark’s pricing is also well-rounded. Did you know that you can get a Surfshark subscription for just $2.30 per month? There is a catch: You’ll need to pay for two years in advance or $59.76 upon signing up. If that’s not for you, though, check out Surfshark’s other affordable offers in this guide.

Each Surfshark VPN plan offered the same features for an unlimited number of devices. The cost ranged from $2.49 to $12.95 a month, depending on the term length.

As the term length increased, the price decreased. Surfshark’s longest subscription costs only $2.49 per month for a two-year package, but that’s made even more affordable by the current deal, which gives users on the two-year plan two months of free services. For the entire 26 months, the average monthly cost is only $2.30.

Compared to some of the other top VPNs, Surfshark is affordable. Take ExpressVPN’s pricing, for instance. The best price for a subscription is $8.32 per month for the one-year plan. The cost of a Surfshark plan for the same time period is $3.99, less than half of what ExpressVPN charges.

Another advantage of Surfshark? You can connect unlimited devices simultaneously. With ExpressVPN, you can only connect five at a time, so if you’re part of a household with more than five devices, you might need to purchase more than one subscription. With Surfshark, one subscription is all you’ll need.

KEEP IN MIND: Surfshark’s one-year and two-year subscriptions both renew at $59.76 annually after the first term.

We think Surfshark is a great VPN, as detailed in our Surfshark review. If you’re not familiar with the VPN itself, here’s why we love it so much:

FYI: With Surfshark connected, you can watch Netflix (or any streaming service) from another country’s server, giving you endless amounts of new entertainment choices. For more information, read our articles on how to change your region on Netflix and how to watch Netflix with a VPN.

FROM THE PROS: Sometimes, we want to catch a Snapchat filter from a different part of the world while we’re on our couch in Manhattan. The easiest way to change your location on Snapchat is by purchasing a Surfshark subscription. It’s the only VPN we’ve reviewed that allows us to change our GPS location on Android.

Surfshark has become quite the jack of all trades recently. In addition to its VPN, it now offers antivirus software, identity monitoring service, and a secure search engine. All three services are bundled together into Surfshark One, an add-on service that you can purchase on top of your VPN subscription for about $1.49 per month.

Here’s a closer look at each service.

Note that after the first two years, you’ll have to pay another $95.52 for the next year of service, meaning that the price doubles. It was a bit annoying that we couldn’t purchase these services separately, but they’re a good idea if you need antivirus software, safe search, and some level of identity theft protection.

Worried about secure online payments for your VPN connection? Consider which payment option is the best for your information security. Depending on the payment method, the company can get more or less information about the customers themselves. For example, Bitcoin would be a better option for the super privacy-concerned, as it doesn’t include any third-party financial institutions and uses cryptography to secure payments. We used a regular old Visa to pay for Surfshark, but here are some other options:

TIP: For the most privacy, pay for Surfshark using cryptocurrency as opposed to a more traditional method like Visa or Mastercard.

Although we’re talking about VPN subscriptions, figuring out a VPN’s cancellation process should be on your checklist before you even purchase a plan. It’s important to know that you have the option and power to opt out of the service for whatever reason.

Cancelling a VPN subscription is typically headache-free. With Surfshark, you just email support@surfshark.com or contact customer support via live chat, and the rep will tell you how the cancellation process works. Plus, if you’re still within the 30-day money-back guarantee, they’ll initiate the refund process as well.

If you’re outside the money-back guarantee period, however, no refund will be issued. They’ll simply stop the recurring payments so that when your current subscription expires, it won’t renew automatically. That said, you can continue to use the VPN until the end of your subscription. You’ve paid for it, so why not?

Surfshark: Is There A Free Trial?

Let’s back up. If you want to try out Surfshark for free as we did, it offers a seven-day trial on iOS and Android; we didn’t even have to put a card down. Once we had created our account, we were able to log into it on our Mac and Windows computers using the same trial plan.

Once the trial ended, we bought a two-year subscription, which, by the way, comes with a 30-day money-back guarantee. So all in all, we got 37 days to test out Surfshark virtually risk-free. During those 37 days, we got to enjoy all of Surfshark’s features with no limits. This is pretty generous, as some free VPNs have limits on the amount of bandwidth we could use, but not Surfshark.

When it comes down to it, monthly subscriptions add up. This reminds us of another reason why we love Surfshark: it offers generous student discounts. Purchasing a VPN subscription is a good idea if you’re a student, and Surfshark is a great VPN for school.

Aside from protecting you from the insecure public Wi-Fi networks across campus, a VPN will allow you to bypass location-based pricing when you shop online, which could help you save money on books and back-to-school clothes. Plus, if you plan on studying abroad, Surfshark will allow you to access sites some other countries block, such as Wikipedia.

But we get it; between tuition and textbooks, most college students don’t have a pile of money lying around to spend on a VPN, which is why Surfshark offers an extra 15-percent off. This discount only applies to the two-year plan, though, but it brings the monthly cost of the two-year plan down to $2.11. Additionally, it includes three months of free service. It’s not much, but at least, it’s there.

But even though we’re no longer students, we still got to enjoy discounted prices. Surfshark is one of the most active VPN companies when it comes to promotions; for instance, last time we reviewed Surfshark, it was offering three months of VPN use for free if we signed up for two years. We could have paid $59.76, the regular price of the two-year subscription, and gotten 27 months of Surfshark VPN. That’s equivalent to only $2.21 a month.

Before you subscribe to Surfshark, be sure to browse its website for its current deals, or check our pages on Surfshark deals and Surfshark Black Friday deals.

We’re always interested in freebies, which is why we took advantage of Surfshark’s referral program.

Here’s how it worked: first, we told all our friends and family about Surfshark and sent them referral links, which were easy to access in our app’s settings under Earn Free Months. If anyone signed up for more than 30 days and used Surfshark via a Windows, iOS, or Android app, we received free months of its VPN, which ranged anywhere from just a month all the way up to a year.

NOTE: In order to receive rewards, the referral must be a completely new customer to Surfshark. Also, you’ll need an active Surfshark subscription to refer friends; you can’t use the referral link on its own.

Before you test out any VPN, we recommend checking its list of servers to find one near you. The distance between the user and the server can greatly affect the internet connection speed, so make sure Surfshark has a server in your area:

Will My Device Work With Surfshark?

Another thing to check before you purchase a Surfshark subscription is the devices compatible with its VPN software. However, it’s highly unlikely that your device won’t work with Surfshark, as it’s compatible with all of the most popular consumer electronics brands like:

Just because we like a VPN doesn’t mean it’s worth it, especially if the price isn’t right. However, Surfshark made our investment well worth it, with prices starting at just $2.49 a month or less with its generous student discount.

Still unsure? Try out Surfshark for seven days with no risk; you won’t even have to put a credit card down. And if you do decide to get a paid subscription, you’ll get 30 more days to test Surfshark or get your entire money back.

Not to brag, but we’re experts on Surfshark, and dozens of other VPNs to boot. But let’s focus on Surfshark, specifically the questions we get asked the most.