On any given night in the United States, upwards of half a million people will be homeless, and about 1 in 5 of them will be children. Cities, states and the nation as a whole have made great progress in fighting homelessness (overall, homelessness has fallen by nearly 15% over the past decade), but homelessness remains at crisis levels across much of the country.

The average American remains terribly concerned about the state of homelessness and, perhaps, how close their family may be to experiencing it. In a recent Gallup survey that measured Americans’ concern level over a range of issues, hunger and homelessness scored higher than drugs, crime and even terrorism.

When most of us are asked to conjure the image of a homeless person, we likely will picture a street-dwelling individual with a serious mental illness, or perhaps a military veteran. To be sure, such individuals make up some portion of the homeless population, but it may be surprising to learn that families who stay in sheltered locations (think: homeless shelters) account for 30% of the total homeless population in the U.S. About 1 in 3 members of the total homeless population stays in unsheltered locations — public spaces, cars and similar locales, meaning the vast majority of people who are homeless aren’t living on the street.

How do we know this? Every two years, the U.S. Department of Housing and Urban Development, along with state and local agencies, conducts what’s called the Point in Time (PIT) count, which calculates national, state and local numbers related to homelessness, including how many people lack stable housing, how many veterans are homeless and the number of homeless children. Since 2007, the PIT’s estimates have shown a clear decline in homelessness across the U.S.

But there are limitations to this method, the largest being that the patchwork system of local housing and homelessness agencies means that there is little consistency in methods or even definitions. This kind of disparity leads to confusing data. For instance, the 2015 PIT count said 564,708 people were homeless, but data from the National Department of Education indicated that during the 2014-15 school year, about 1.3 million public school students were considered homeless. Also, the PIT count is conducted in late January, a time of year in which unsheltered homelessness falls along with the temperature.

Still, the past several years of PIT counts have shown a clear pattern — the rate of homelessness is falling in most states and even in most major cities. However, there are several major metro areas that appear to be in the midst of a serious homelessness crisis, based on our analysis of the PIT data from 2014 to 2018.

As we’ve already reported, the majority of people who experience homelessness stay in shelters, including emergency shelters, transitional housing programs or safe havens. In fact, 65% of the total homeless population spends the night in some form of shelter.

What else does the 2018 PIT tell us about the shape of homelessness? 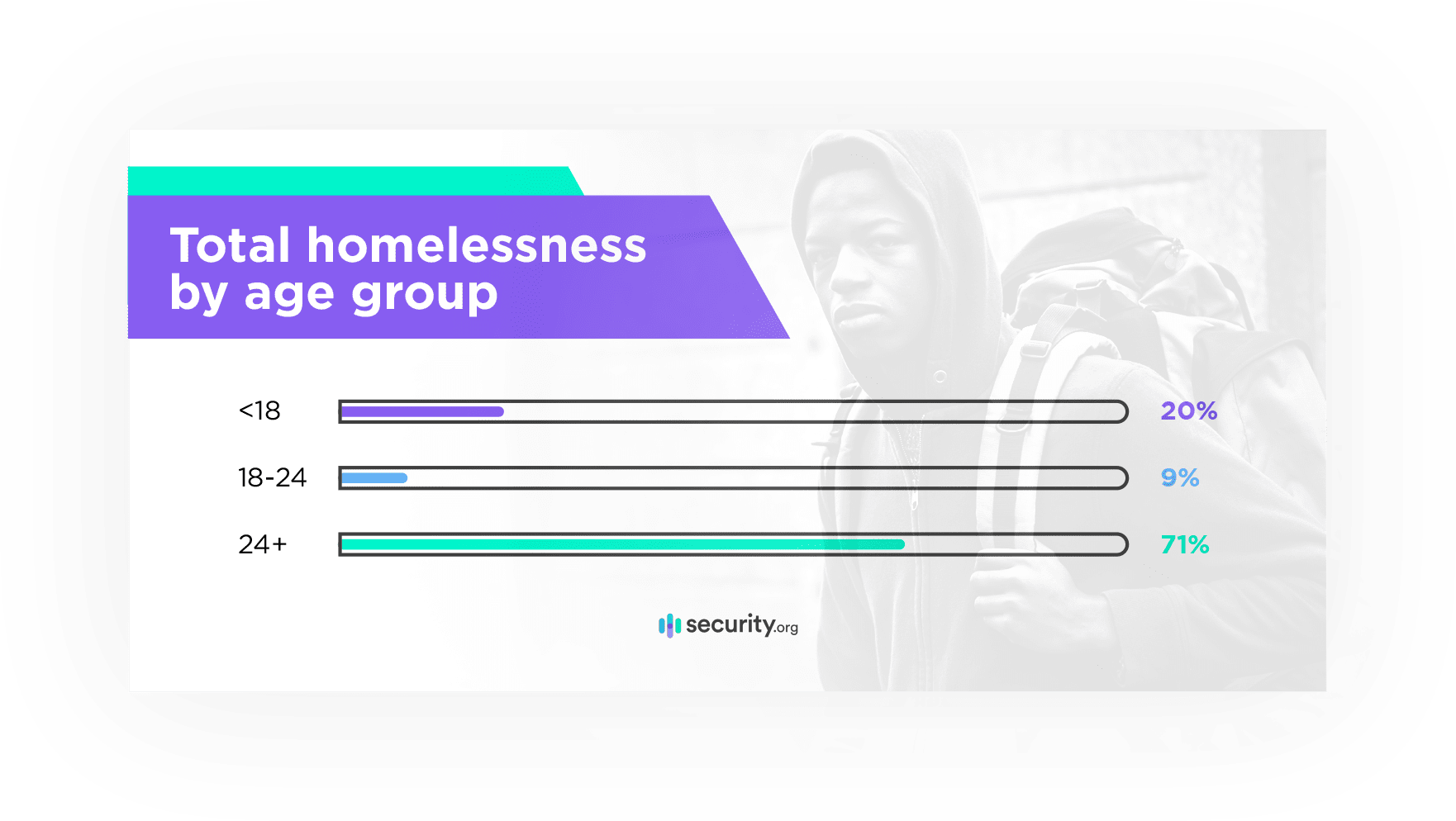 More children are considered homeless than the percentage of young adults who are homeless, but those 24 or older make up by far the largest portion. 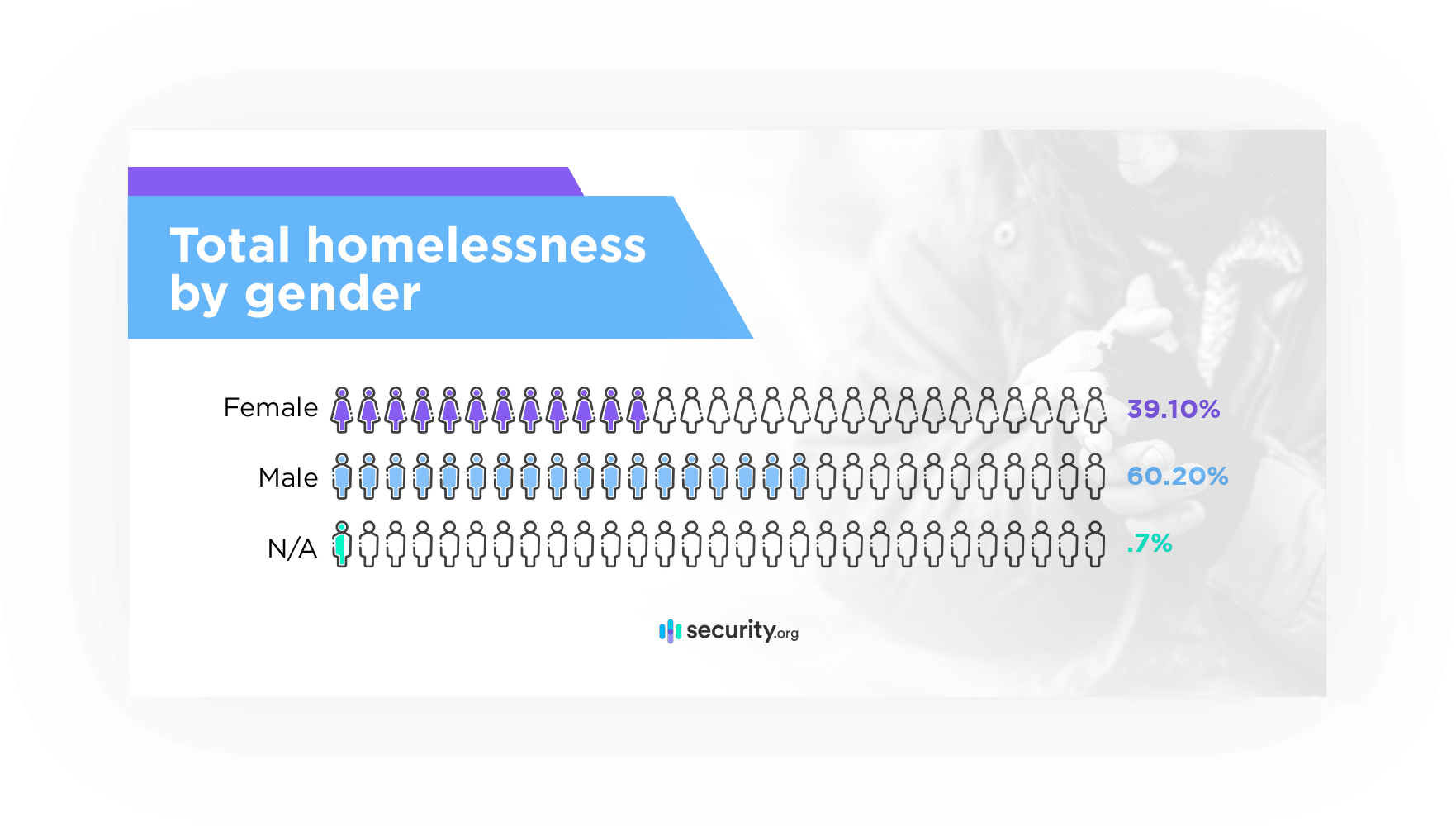 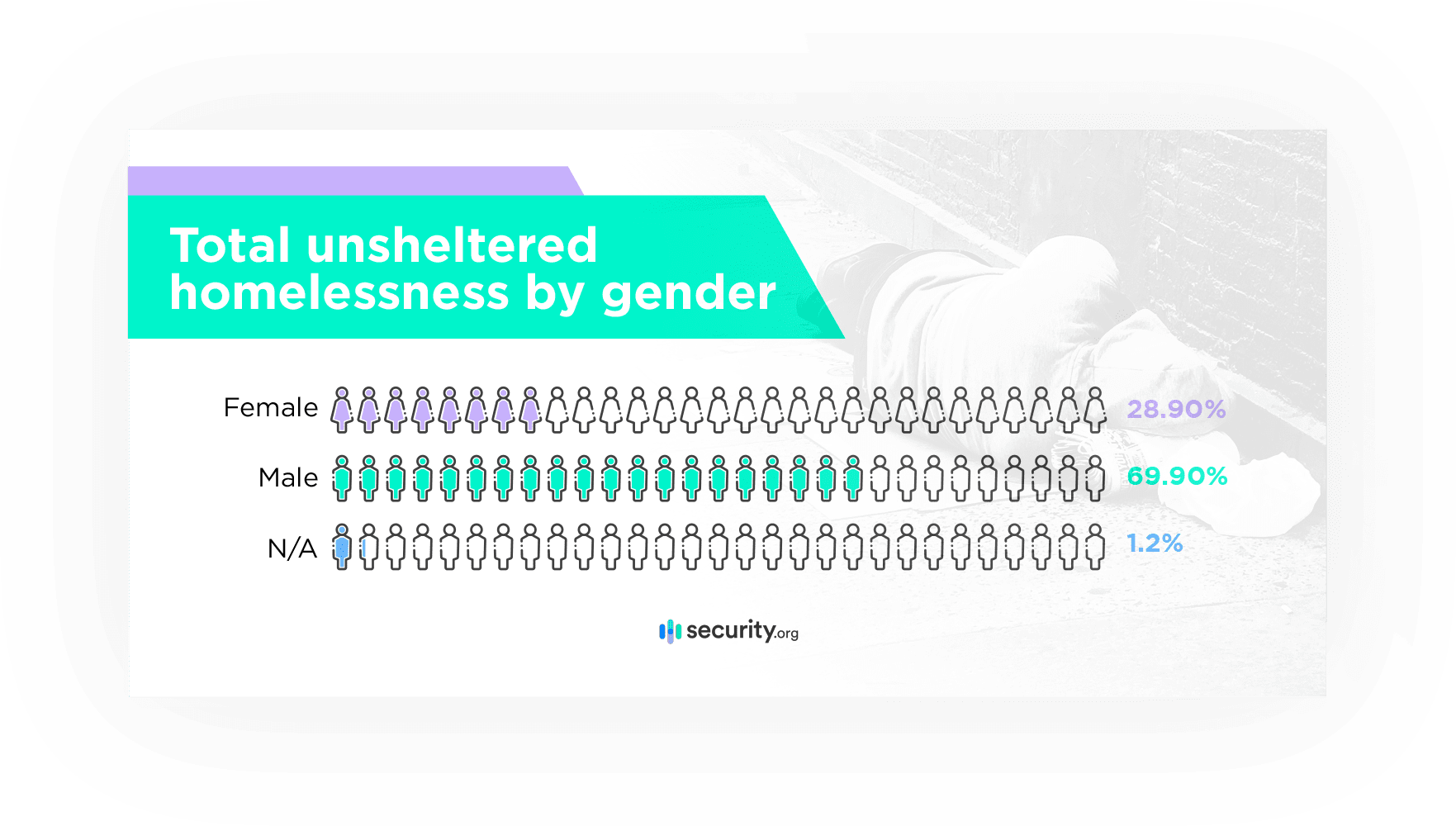 Men are far more likely than women to experience homelessness, particularly staying outside of shelter. 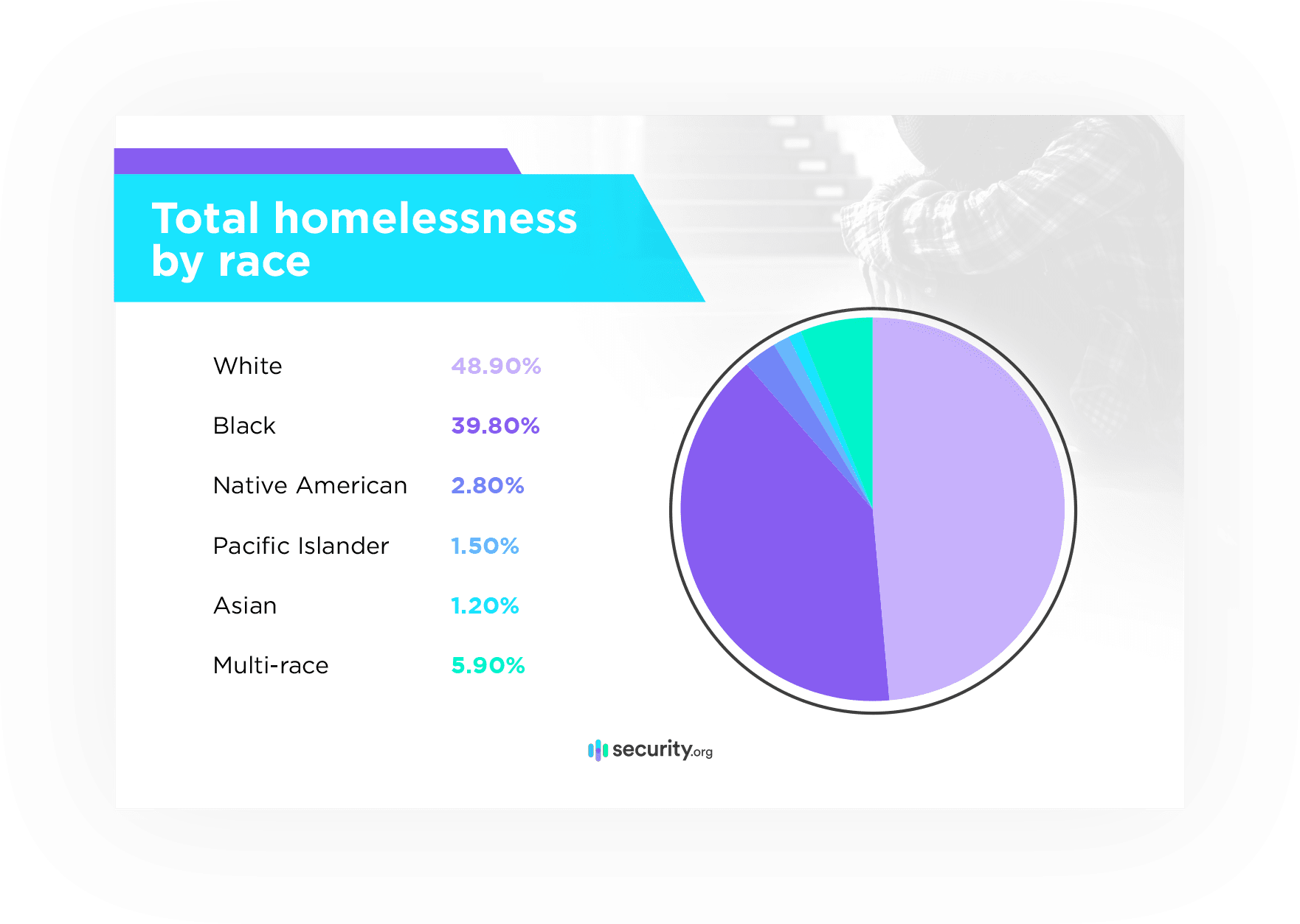 About two-thirds of the homeless population are counted as individuals, meaning they live outside of a family unit or other household. These people are much less likely to be sheltered (only about 52% are sheltered) and much more likely to be older. 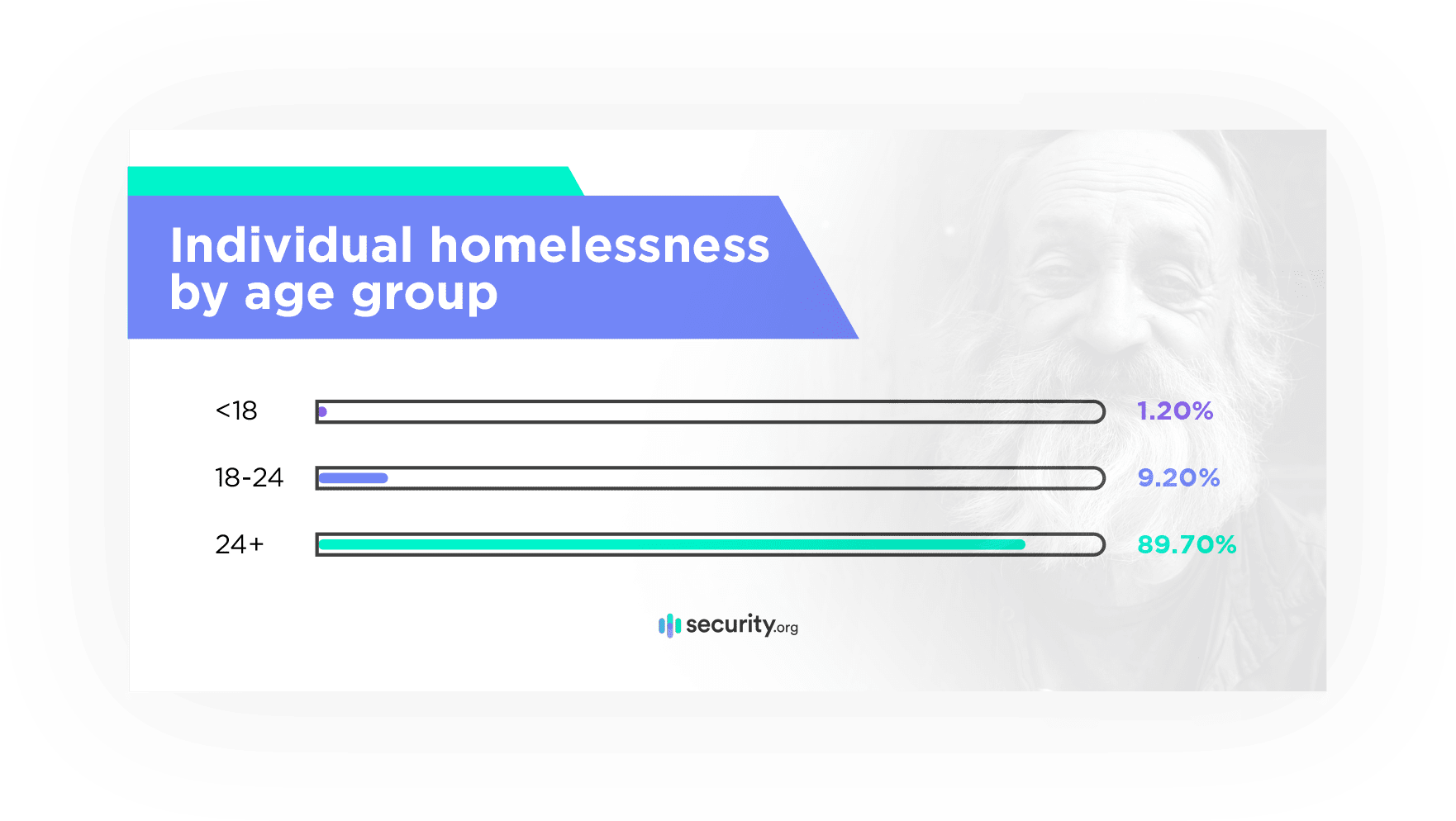 Military veterans account for about 9% of all homeless adults, and the number of homeless veterans has declined by nearly half since 2009.

Nationally, Americans experience homelessness at a rate of about 168.03 per 100,000 people, which has fallen by more than 6% over the past five years. But when it comes to sheer numbers, just two states (California and New York) account for about 40% of total homelessness. 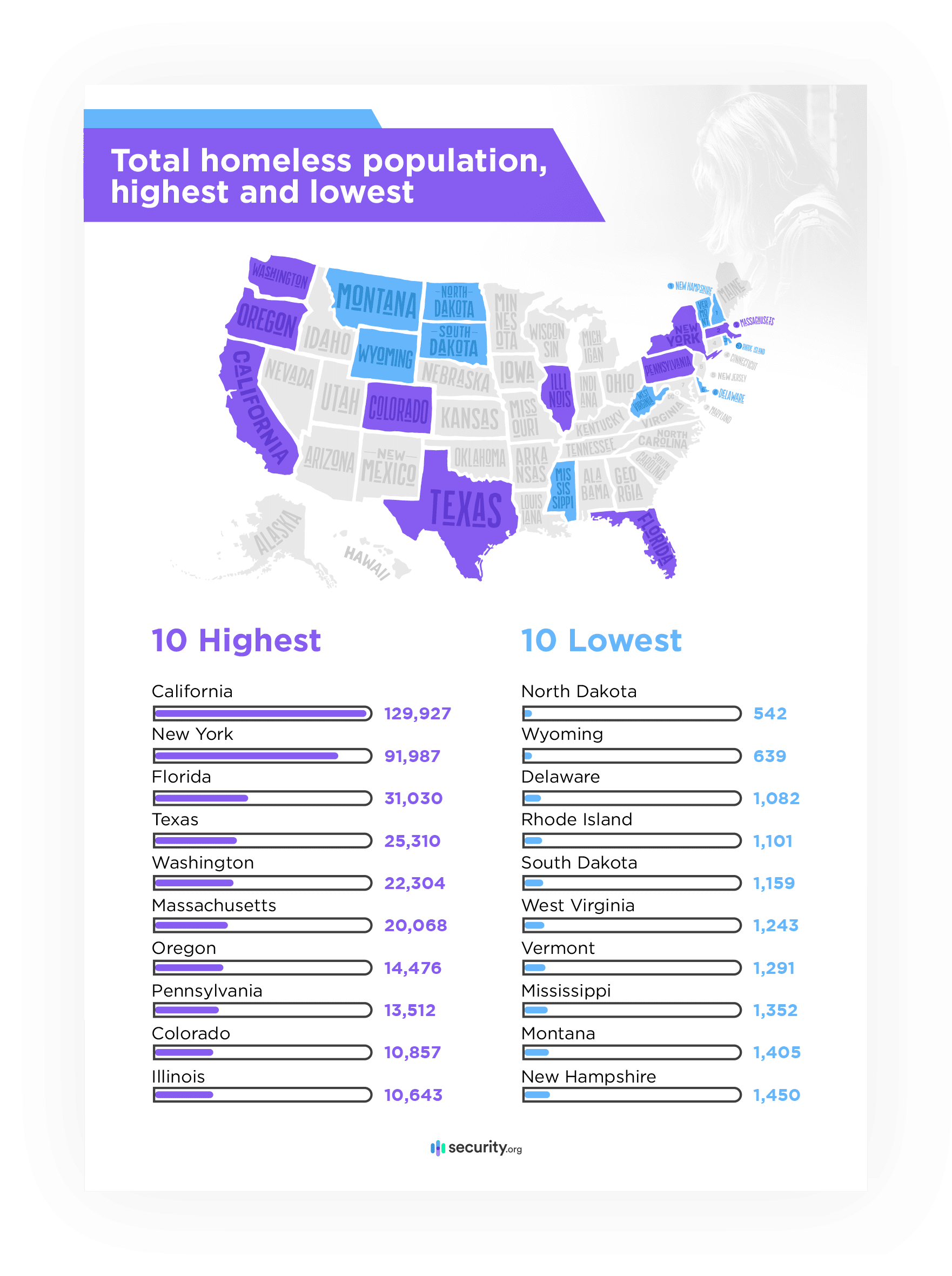 But after adjusting for population, we see a great deal of shifting, with the District of Columbia’s population density vaulting D.C. to the top of the list — dramatically. 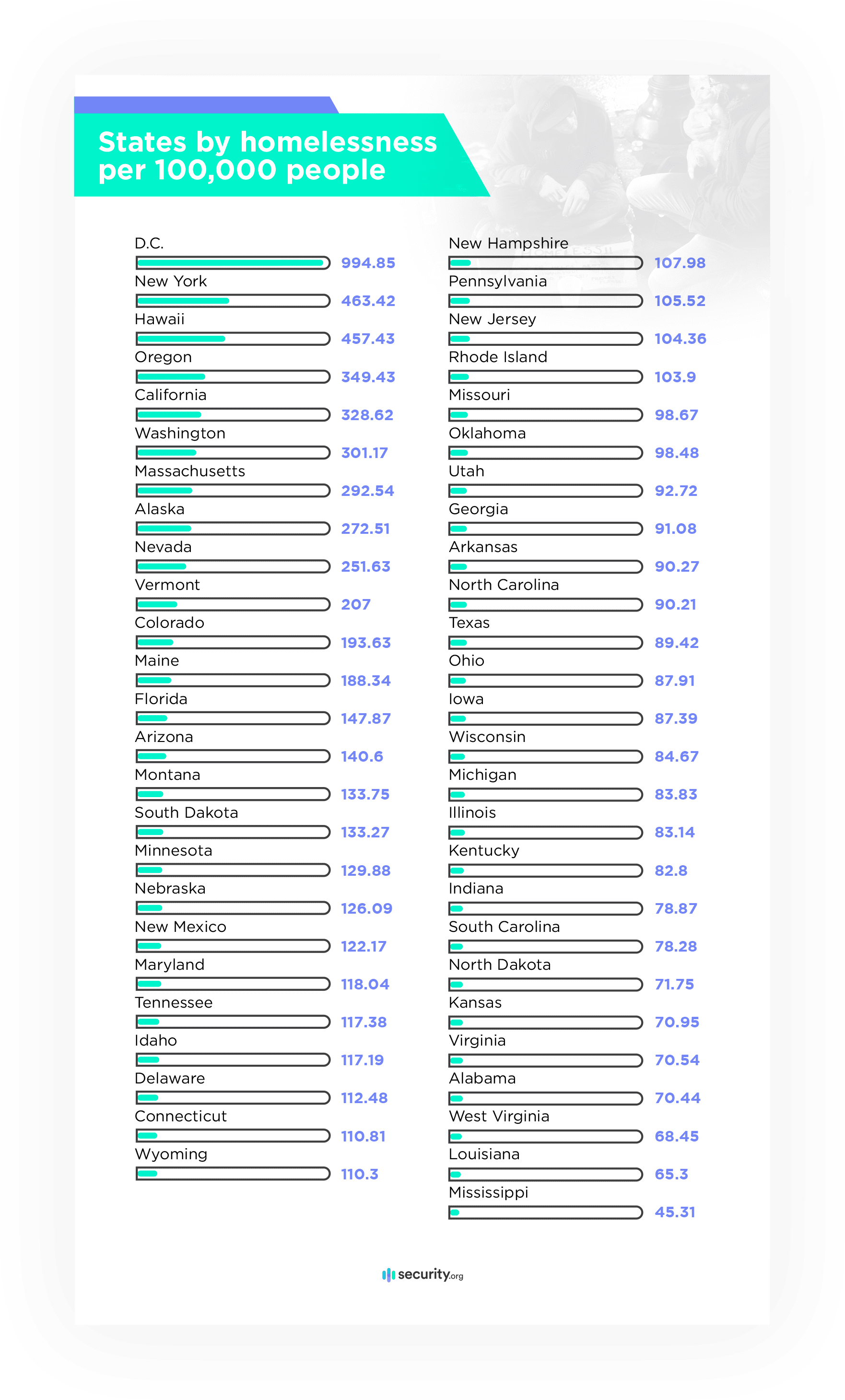 Over the past five years, the PIT count has shown an overall decline in homelessness of about 6.1% in the U.S., and the vast majority of states follow this trend with several notable exceptions. 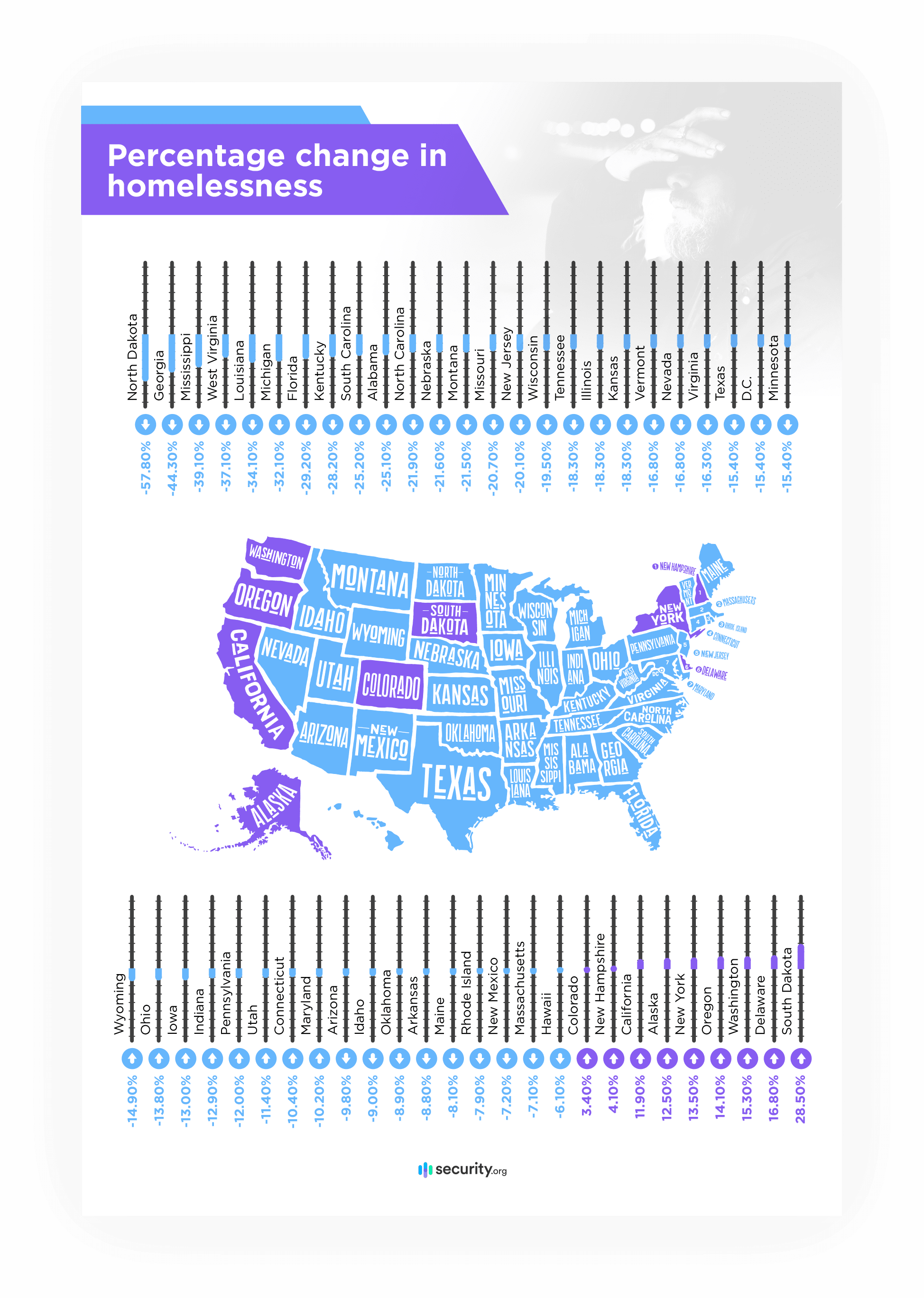 Only nine states have seen their homelessness rates climb over the past half-decade, but among the 10 states with the highest rates, half have posted increases in homelessness.

Of course, examining state-level data tells us only one part of the story. That’s because there is so much variation in economic and other conditions from city to city that even within one state, communities have widely divergent experiences with homelessness. For instance, within the state of Georgia, the PIT count shows that Savannah has a population-adjusted homeless rate of 259.05 compared to Atlanta’s 51.69 per 100,000.

Among large urban areas for which data was available for both 2014 and 2018, 23 had population-adjusted rates higher than the overall national homelessness rate, while several large cities, such as Atlanta, had rates far lower. 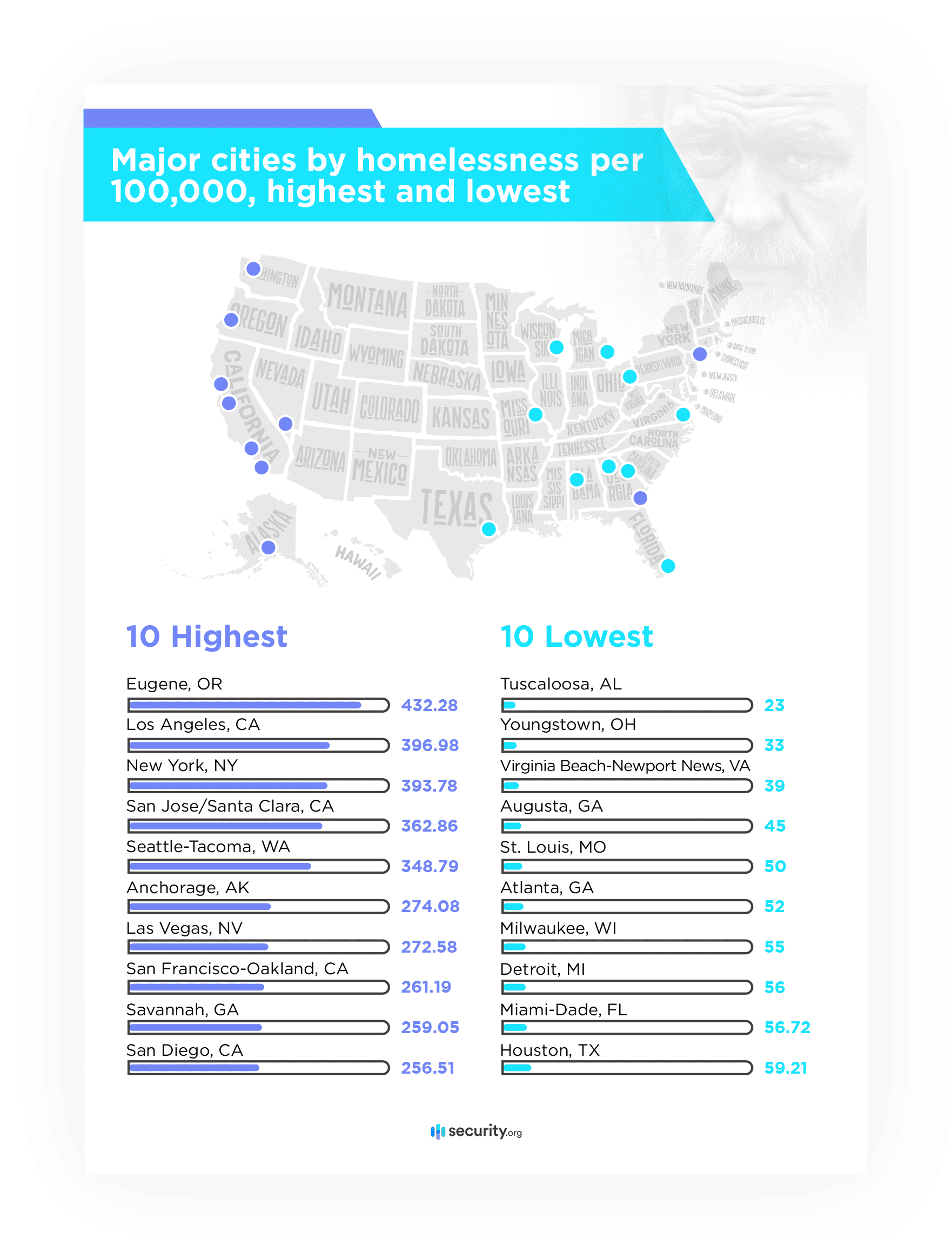 Among the major cities with the highest rates of homelessness, eight are in the West and four are in California alone. Georgia is the only state with at least one city on both lists.

Of the nearly 100 major metros for which the past five years of PIT data was available, more than three-quarters have seen homelessness rates decline, though some cities have seen quite dramatic increases. 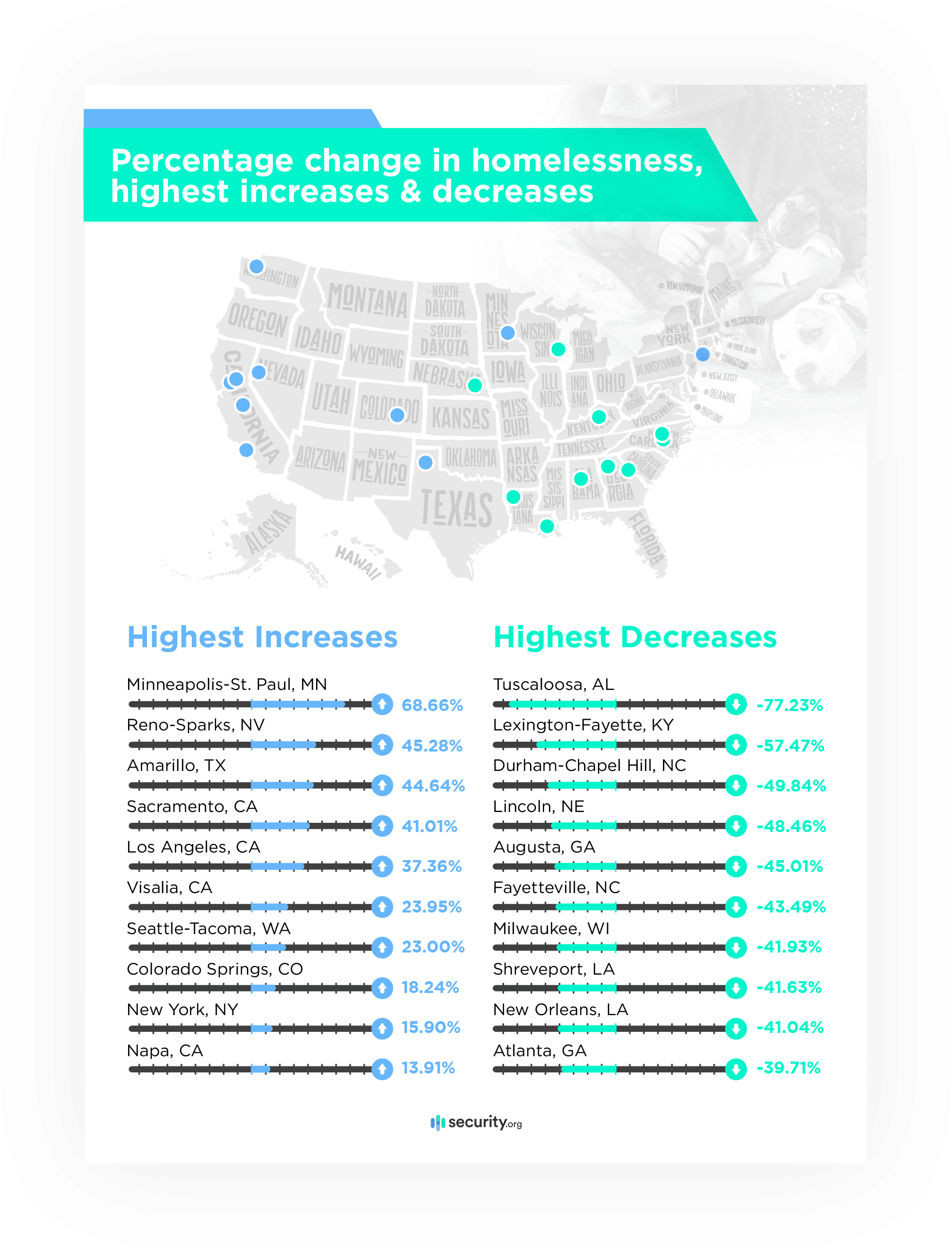 While the Twin Cities have seen a dramatic increase in homelessness, the Minneapolis-St. Paul homelessness rate is still far below national levels, and among the decliners, interestingly, the top four all are home to major public universities.

In examining our city-level homelessness data, we noted a total of 32 cities that either had population-adjusted rates of homelessness that were higher than the overall U.S. rate or that bucked the national trend and posted increases in their homeless rate between 2014-2018. These cities, we believe, can be considered the epicenters of homelessness in the U.S.; this represents about 1 in 3 major American cities.

California has by far the most communities on this list with 10, followed by Nevada, Colorado and Washington with two each. Six of the 32 are in the Midwest, and 15 are in the West.

Homelessness is a complex and tragic problem against which the U.S. appears to be making headway. But as we’ve seen, a broad national view begins to break down when you zoom in, and the more you zoom, in many places, the worse the picture gets. Across the country, cities and states are trying to end chronic homelessness, and some are seeing success. Through a combination of addressing employment, mental health and — crucially, the first step — providing housing, cities across the U.S. are changing the face of homelessness, perhaps erasing the crisis altogether.

As mentioned, the information we used on homelessness in the nation, states and cities came from the U.S. Department of Housing and Urban Development’s 2018 Point in Time homelessness count. You can access the PIT tables here.

It’s important to note that HUD’s report sorts communities into what it calls Continuums of Care, or CoCs. These are local groups, boards or other organizations that provide homelessness services in a community; this is sometimes done county-by-county, though some groups cover entire states.

For our analysis of major U.S. cities, some CoC data was combined in areas where multiple CoCs may provide services across a large metro area. Data for the Seattle-Tacoma area, for instance, was calculated by combining numbers for the two cities’ CoCs.

The content and images on this page are free to share for noncommercial uses. If you wish to share anything here with your readers, please simply provide a link back to the URL of this page.