Which U.S. Cities Are the Most Dangerous?

If you had to guess which town in the United States was the single most violent, would you have picked tiny Industry, California? Probably not. Most of us would likely name St. Louis or Baltimore, maybe Chicago or New York.

Surely few, if any, would point to the 204-person Industry, a suburb about 22 miles away from downtown Los Angeles. But, according to the most recent federal crime statistics, Industry’s rate of violent crime is an astonishing 35,784.31 per 100,000 people, nearly 10,000% higher than the overall U.S. violent crime rate.

The FBI reported that a total of 73 violent crimes took place in Industry in 2017 (1 murder, 5 rapes, 36 robberies and 31 aggravated assaults). With the city’s tiny population, that makes for an eye-popping crime rate.

So it’s not really fair to call Industry the most violent or dangerous city in the country. Then which one is? Let’s examine which cities are most dangerous  — and break down which violent crimes are most prevalent in which cities.

The FBI’s annual Crime in the U.S. reports reveal all sorts of details about the state of crime in our country and include details on crimes committed, people arrested, weapons used and more. For our purposes, we’re focusing on which cities have the highest rates of violent crimes — murder, aggravated assault, rape and robbery. We’re also excluding all cities under 10,000 in population; sorry, Industry.

Among the cities that remain, examining the total number of violent crimes produces a list along the lines of what you might expect, with all four of the 2 million+ cities coming in at Nos. 1-4 on the list, but two relatively small cities (Indianapolis and Baltimore) seem to be punching above their weight class. Across the entire U.S. in 2017, about 1.3 million violent crimes took place. 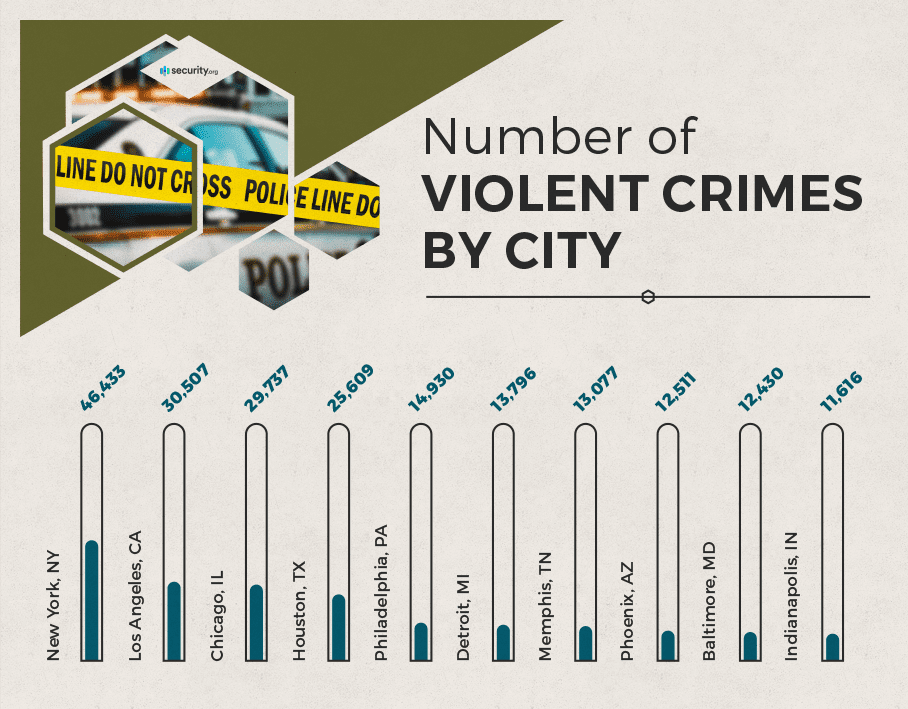 Of the top 10 cities, six of them have populations over 1 million, while Baltimore has the lowest population among the top 10. The inverse of this list is a little bit trickier, as many communities had no reported violent crimes at all and far more had only a few.

As we know, though, just looking at sheer numbers tells only one part of the story. A better comparison takes into account population differences, so which cities have the highest rates of violent crimes relative to their population size? 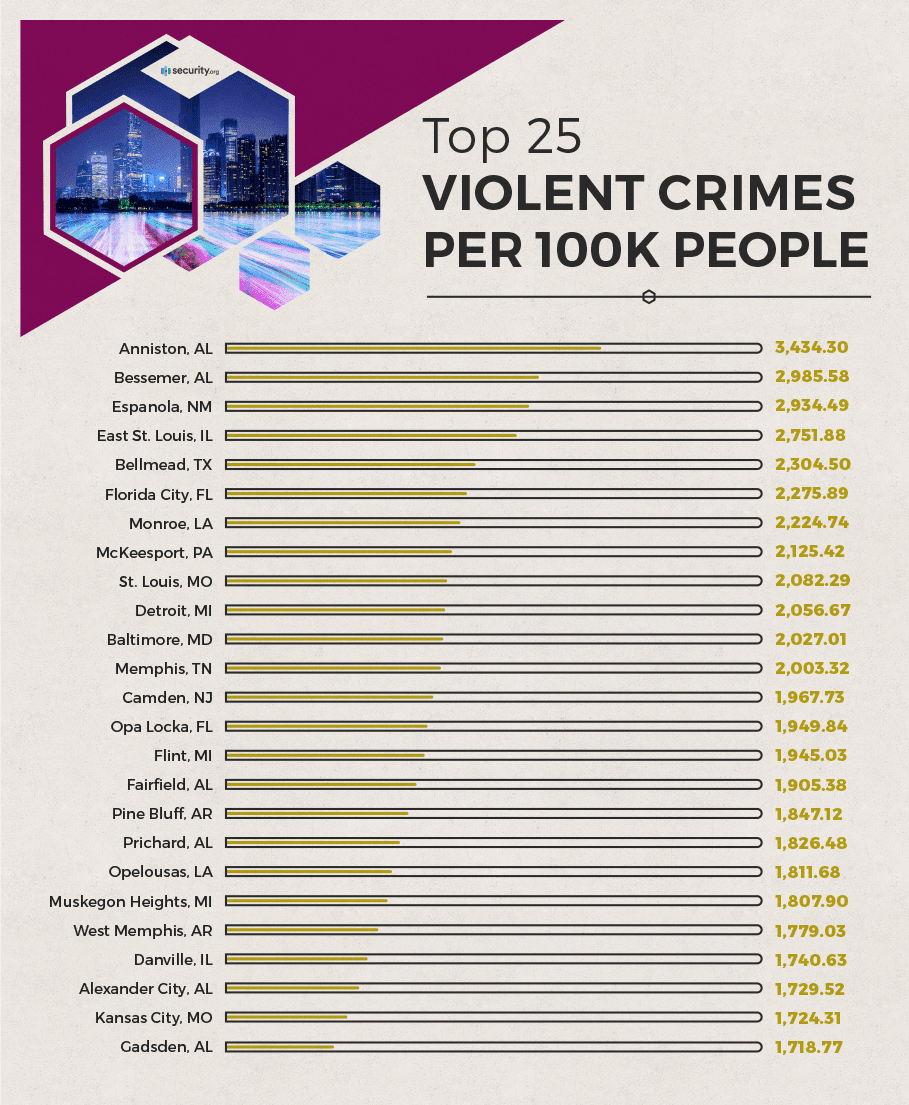 The U.S. city with the single highest population-adjusted rate of violent crime is Anniston, Alabama, a community of about 22,000 in the northeastern part of the state. Another Alabama community, Bessemer, is No. 2, and three others in the state are among the top 25.

Several large cities are on the list, including St. Louis, Detroit, Memphis, Kansas City and Baltimore, which also appeared on the list of cities with the highest numbers of violent crimes.

Just over 17,000 people were the victims of murder or intentional manslaughter in the United States in 2017, making murder one of the few violent crimes that’s actually rising. Since 2014, the number of murders in the U.S. has gone up by more than 22% and stands at levels last seen more than a decade ago.

Chicago had the most murders among all cities with 653, nearly double the second-highest city, Baltimore. 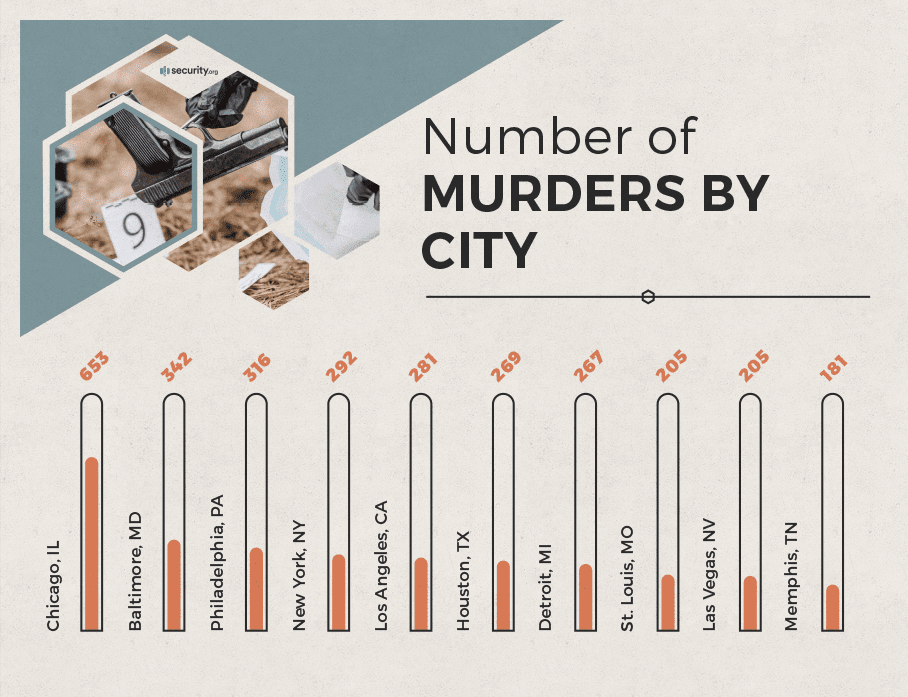 As with the overall number of violent crimes, this list largely tracks with population size, though St. Louis, with a population of about 310,000, comes in at No. 8. Chicago had nearly as many murders as Baltimore and Philadelphia combined in 2017.

After adjusting for population differences, though, the city with the highest murder rate does not appear among the top 10 when it comes to total volume of murders. 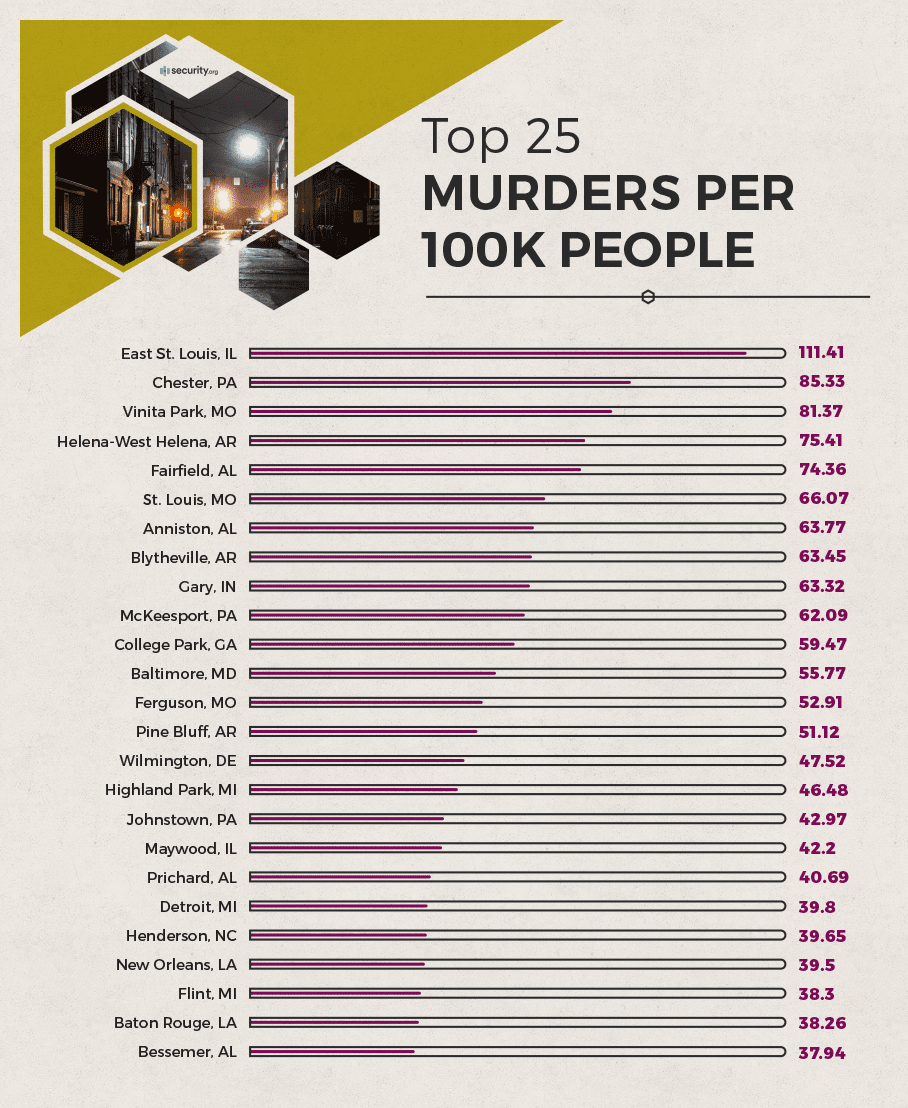 East St. Louis, No. 4 on our violent-crime rate list, tops the list of cities by murder rate, with a rate that’s far higher than the next couple of cities on the list, Chester, Pennsylvania, and Vinita Park, Missouri. Several major cities are on this list, including St. Louis, Baltimore, Detroit and New Orleans.

An estimated 135,755 rapes took place in the U.S. in 2017, though rape is a crime that’s notoriously underreported and tragically misunderstood. Even in an era where there are fruitful conversations taking place about sexual consent, the states don’t agree on what constitutes rape, with some jurisdictions seeming to use a definition that would exclude things like date rape.

More rapes were reported in Los Angeles than any other city, though New York City was close. 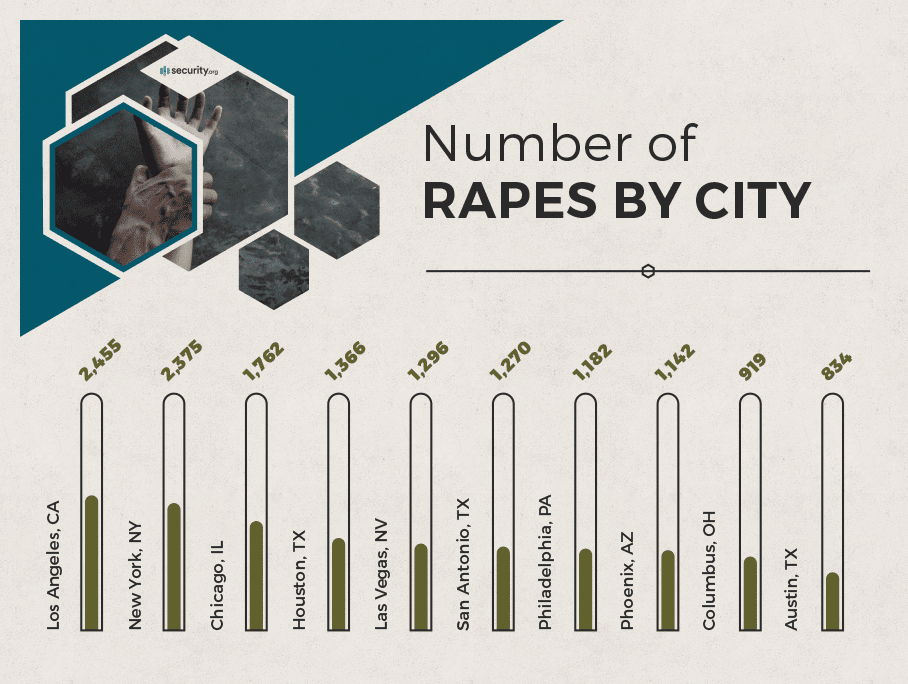 While the top of this list generally falls in line with population size, there are some interesting entries here. Columbus and Austin both have less than 1 million residents, though they are Nos. 9 and 10, respectively. Notably, both cities are home to two of the 10 largest public college campuses in the country, Ohio State University and the University of Texas. An estimated 1 in 10 college students will experience rape or sexual assault.

After accounting for population differences, our list changes dramatically. In fact, only three of the cities among the top 25 have populations over 1 million. 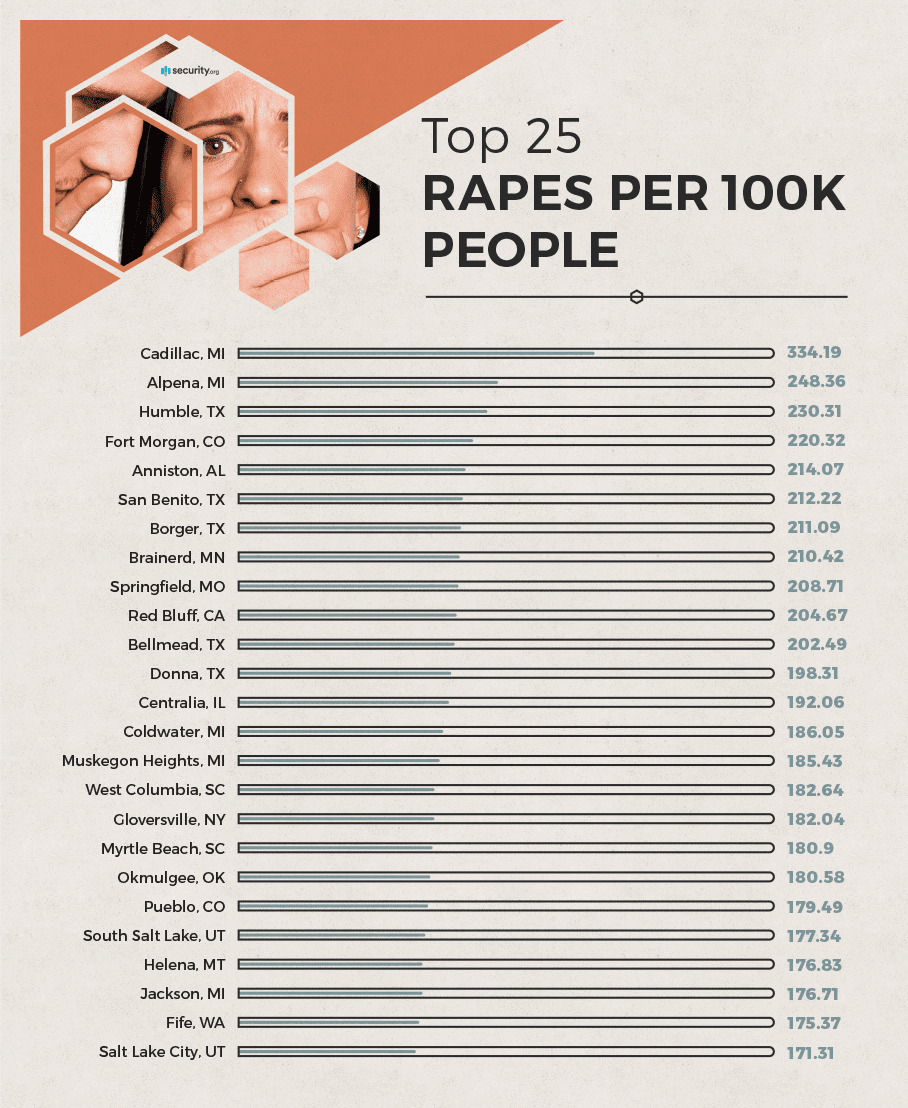 Cadillac, a city of just over 10,000 in northwestern Michigan has the nation’s highest population-adjusted rape rate, posting a rate that’s about one-third higher than the next-highest, another Michigan city, Alpena. Texas and Michigan both have five cities in the top 25, while Colorado, South Carolina and Utah each have two. Salt Lake City, at No. 25, is the largest one on the list, with a population just shy of 2 million.

The second-most common violent crime, robbery is often confused with property crimes like burglary or larceny, but while precise definitions can vary by jurisdiction, robbery is marked by one key difference — violence or the threat of force.

More than 300,000 robberies took place in the U.S. in 2017, with large cities generally accounting for large numbers of such incidents. 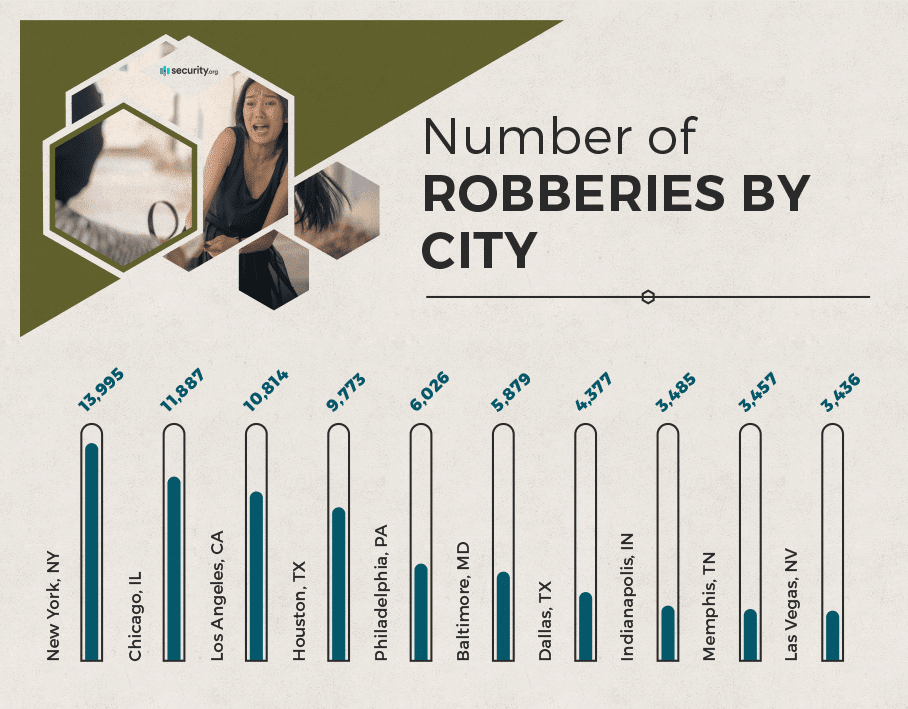 New York had by far the most robberies reported, which makes sense if you accept that the archetypal crime in the city is a mugging, which is a form of robbery. A handful of smaller cities, Baltimore, Indianapolis and Memphis, leapfrogged some larger ones to rise to the top 10.

After accounting for differences in population, the city with the highest robbery rate is Baltimore, which followers of the public dispute between President Donald Trump and U.S. Rep. Elijah Cummings would likely not find surprising. 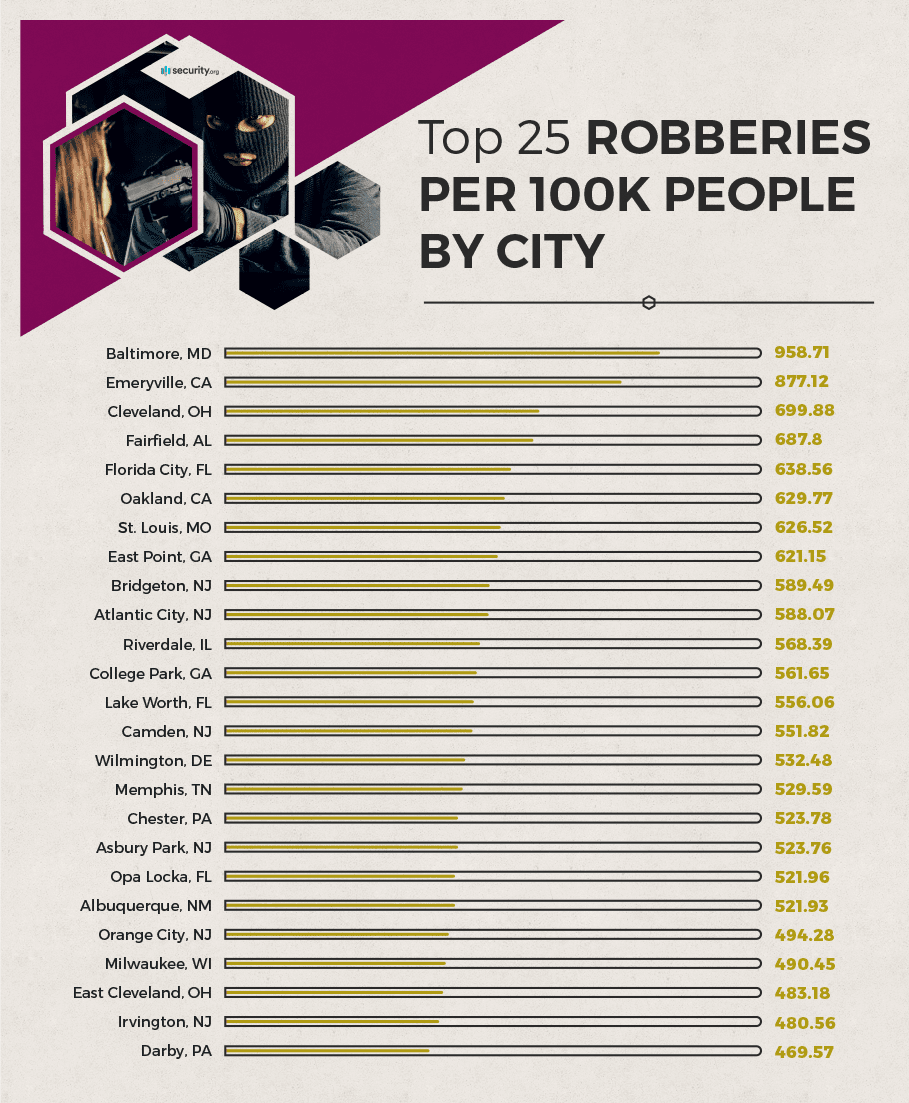 Six New Jersey cities are in the top 25, the most of any state, while Florida has three and California, Georgia, Ohio and Pennsylvania have two each. No city in the top 25 has a total population exceeding 750,000.

By far the most common violent crime in the U.S., accounting for more than all the others combined, is aggravated assault. This is not the only type of assault crime, however, and what distinguishes aggravated assault from other forms, such as simple assault, is the use of a weapon or the infliction of serious bodily injury on the victim. More than 810,000 aggravated assaults were reported in the U.S. in 2017, which represents an increase from the previous year, though the number has fallen by nearly 17% since 1998.

According to sheer volume, New York had far and away the highest number of aggravated assaults, and the remainder of the top 10 mostly includes heavily populated cities. 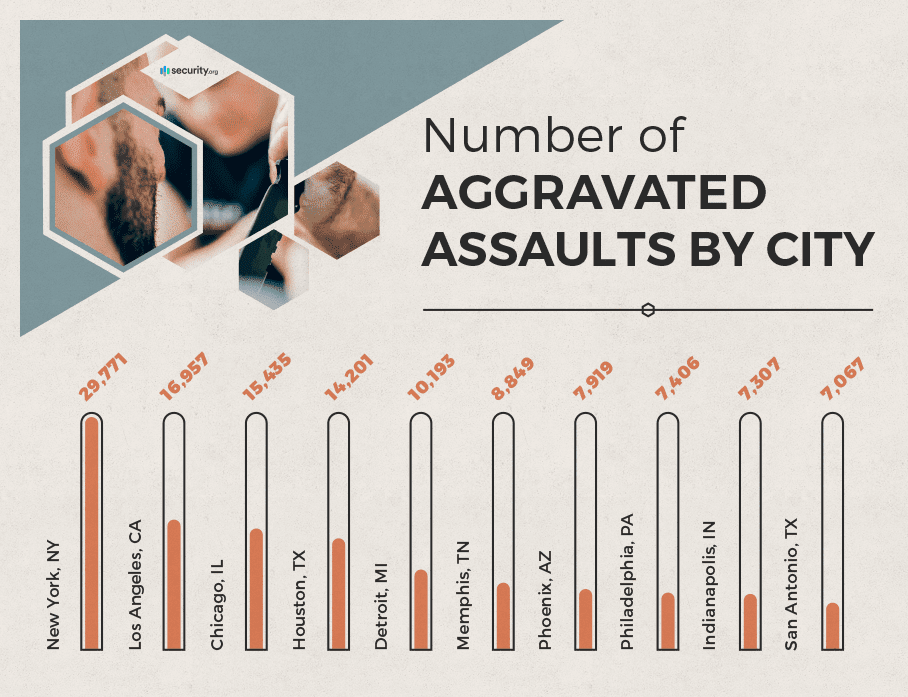 Texas is the only state with more than one city among the top 10, but New York’s nearly 30,000 aggravated assaults accounted for more than Houston and San Antonio combined. 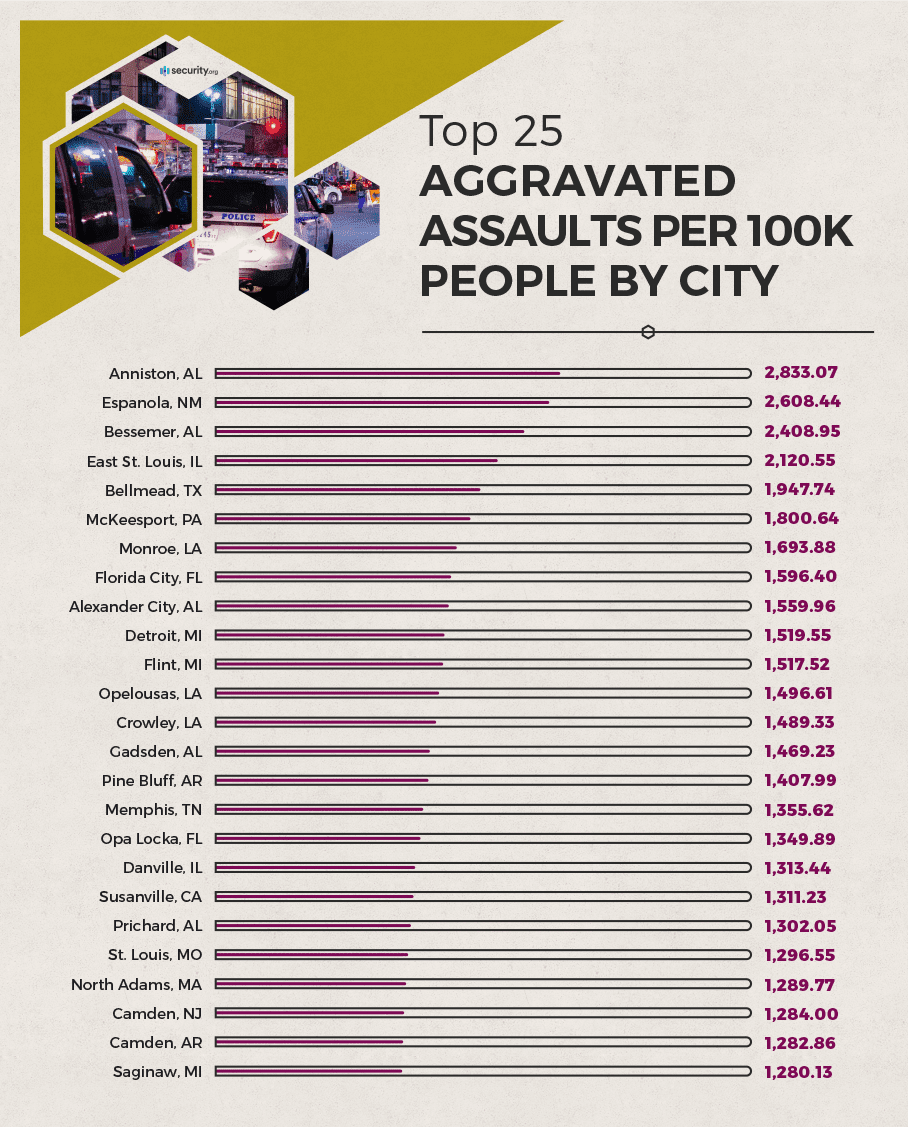 Anniston, Alabama, which had the highest overall violent crime rate, also tops this list, along with four other Alabama cities. Michigan and Louisiana each have three, and two cities with the same name appear — Camden, one in New Jersey and the other in Arkansas — with nearly identical rates.

So which cities are all-around the most dangerous? There’s one aspect we haven’t addressed here, and that’s how these cities rate relative to the overall rates of crime in the U.S. To figure out the 25 most dangerous American cities, we’ve also take into account national rates of murder, rape, robbery and aggravated assault, calculating each city’s crime rate as a percentage of the corresponding U.S. rate and then averaging the four percentages together.

If you’ve read closely to this point, you probably could have guessed more than a few of these, but there are some interesting entries. 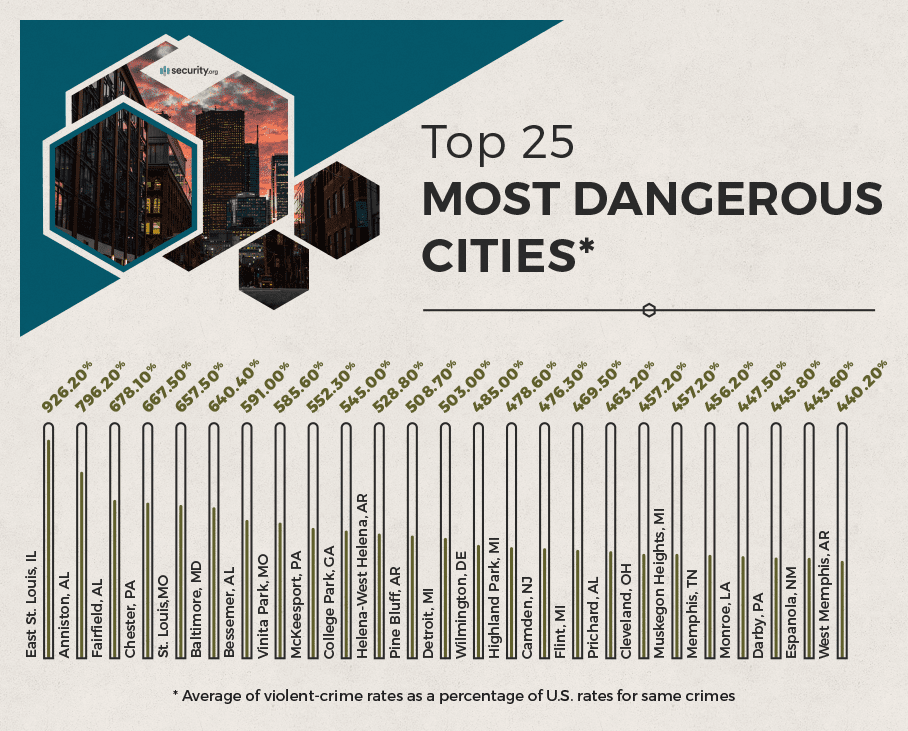 Our analysis finds the single most dangerous American city is East St. Louis, Illinois, just on the other side of the Mississippi River from St. Louis, Missouri, which is No. 5 on our list. All 25 have appeared on at least one of the lists of the population-adjusted crime rates, and most have appeared multiple times.

Detroit is the largest city in the top 25, and you may be wondering how safe America’s largest cities are. Among the 35 or so cities on our list with populations that exceed 500,000, Baltimore is by far the most dangerous, according to the city’s violent crime rates as a percentage of corresponding rates for the entire U.S. 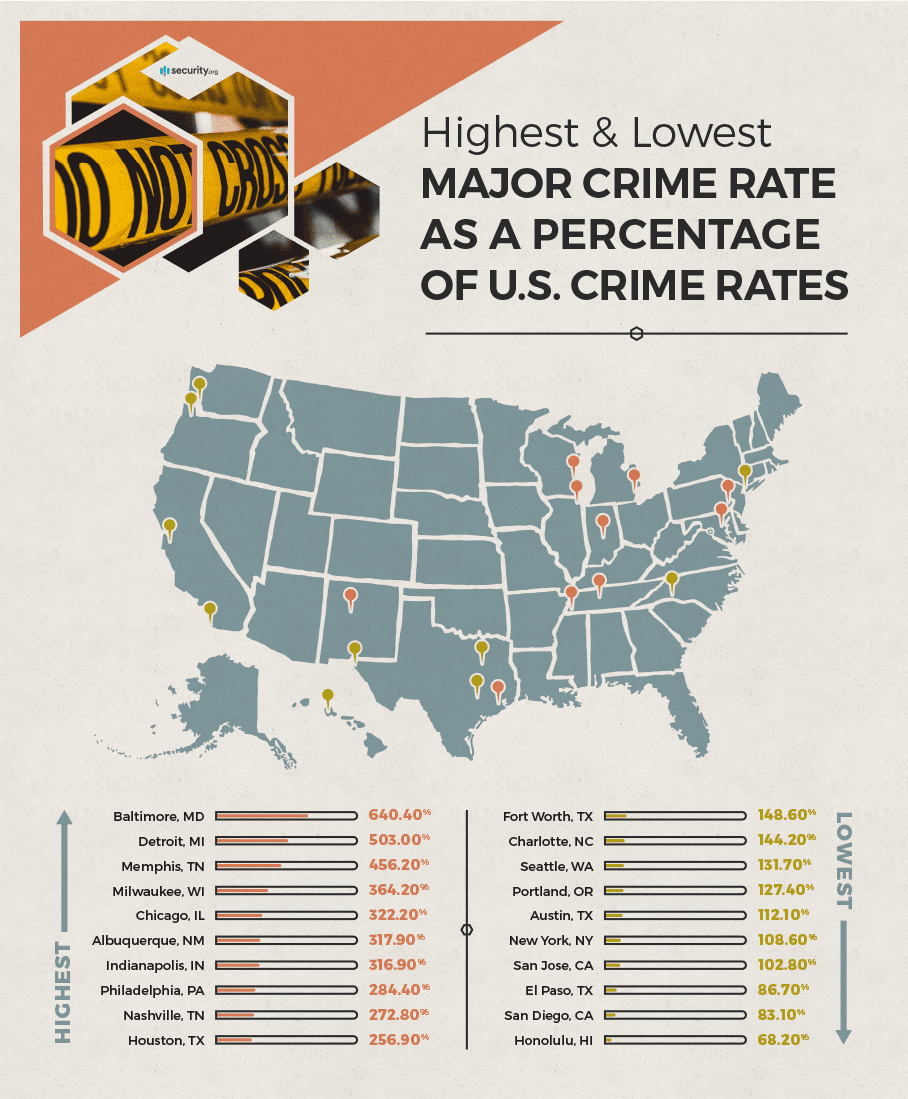 Only three of the 30+ largest U.S. cities have crime rates that average out to less than 100% of the respective crime rates for the nation as a whole, and most of them have rates in excess of 200% of the national rates.

What we haven’t broached here is the why of city violence. To be sure, total population plays a role, though when compared to overall U.S. crime rates, the largest city in the country, New York City, has one of the lowest incidents of crime relative to the nation.

It’s a fact that FBI data indicates violent crime is a bigger problem in Baltimore than in any other major city. But Baltimore is not unique in having high rates of crime, as most of the largest American cities have similarly high rates of crime. Those communities, places like Albuquerque and Indianapolis and Milwaukee and Phoenix, are rarely ever held up as examples of failing cities by politicians who want to pick fights.

We’re not suggesting we have the answers for how to improve the lives of people in Baltimore and make them less likely to be victimized by violence. But we do know that improvements are possible, as violent crime (and crime in general) is becoming less common across the United States. A good place to start would be remembering that “real America” is urban America — the 9,000-plus cities we examined accounted for nearly two-thirds of the entire U.S. population.

All the crime data we used came from the FBI’s 2017 Crime in the United States report, which was published in 2018. This is the most recent dataset that federal officials have released. We used the information on offenses known to law enforcement sorted by city.

The FBI also sorts data by metropolitan statistical areas, but we wanted to use the most granular data possible, so we opted for cities proper. There are a few limitations to this data, most notably that the state of North Carolina does not conform to the FBI’s definition of rape, so that information was not available for cities in that state.

The research, data and images on this page can be shared for noncommercial purposes. If you want to republish any information from this page, simply include a link back to the URL at the top.