Could concerns about misinformation be driving Americans to improve their media literacy? 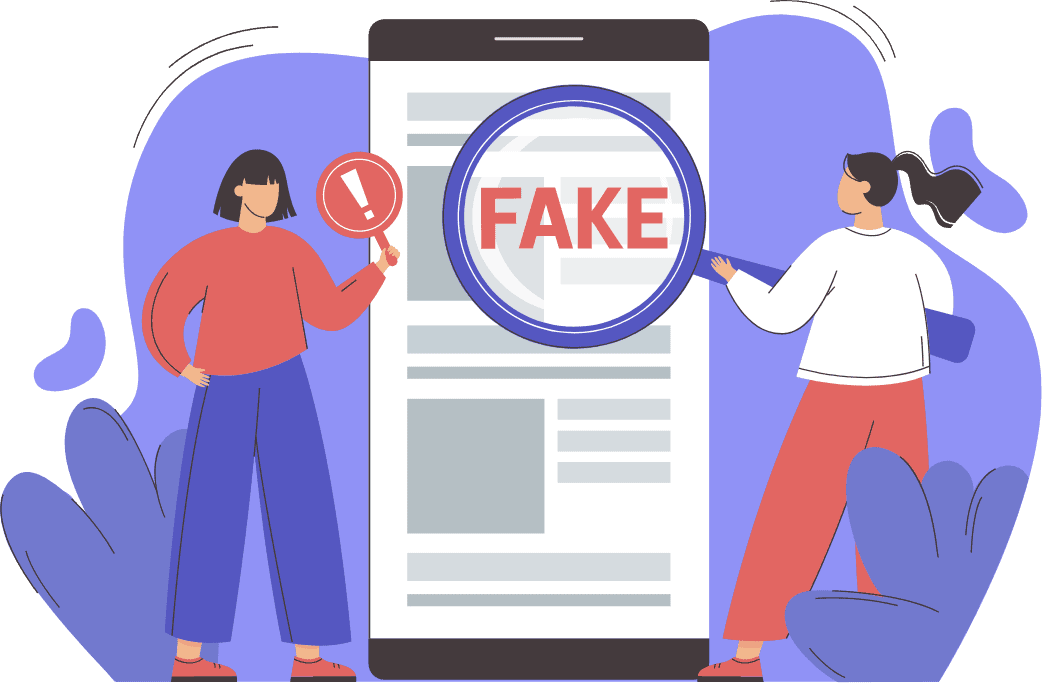 The misinformation and disinformation that have influenced elections and hampered public health policies also damaged faith in all forms of media. Meanwhile, political attacks on some news sources have divided Americans further into partisan camps.

The nation is united, however, in recognizing the problem. Our second annual study of more than 1,000 people revealed that nine out of 10 American adults fact-check their news, and 96 percent want to limit the spread of false information.

Over the past few decades, the explosion of digital platforms has dramatically reshaped the informational environment. Where mass media operations once vetted and monopolized news coverage, anyone can instantly publish news today, as long as they have an internet connection.

Whether this paradigm represents freedom or danger, it has undoubtedly proved popular.

Today, three in four Americans use social media at least once a day, but 41 percent said the same about mainstream news media. 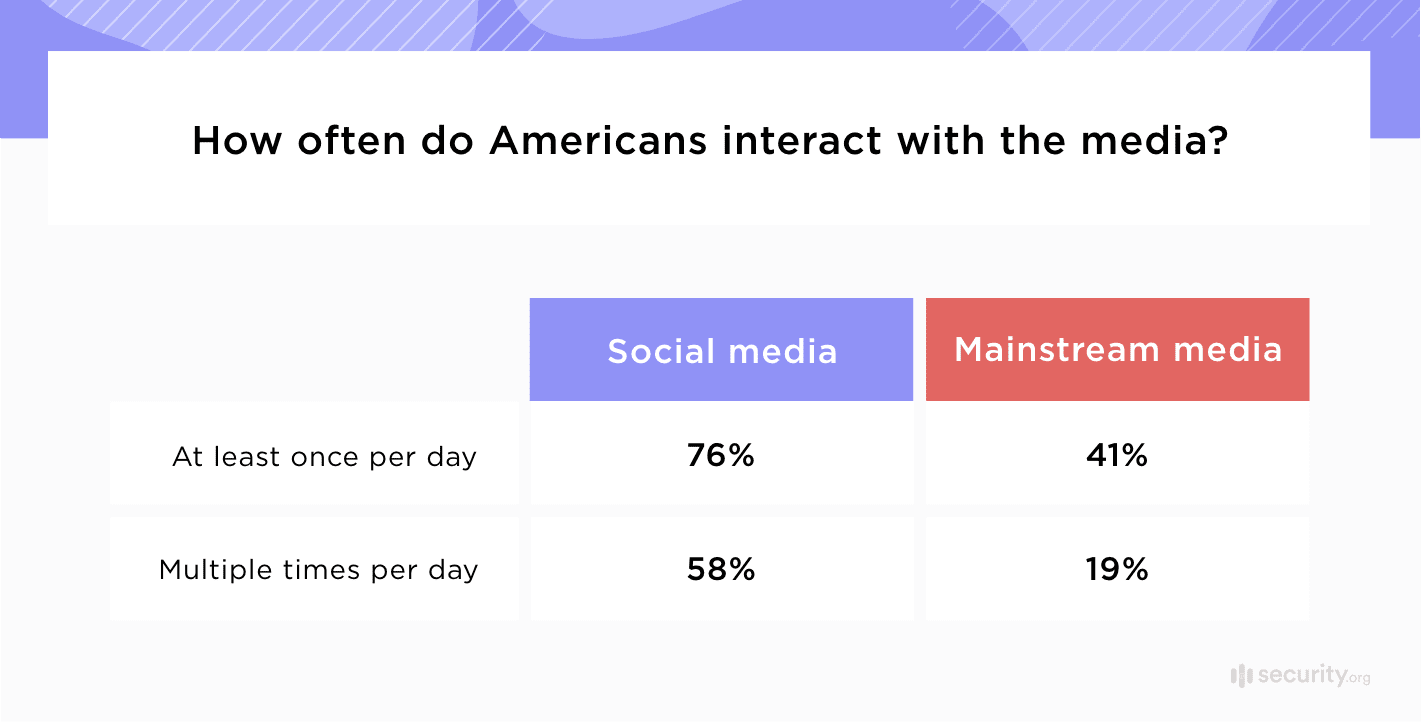 Though many people rely on social and news media to get information, public opinion of both sources is dropping. One-half of Americans hold the media in lower regard than they did just twelve months ago, and one-quarter say their trust has grown “much worse” over that time. Only two percent of adults said their trust improved. 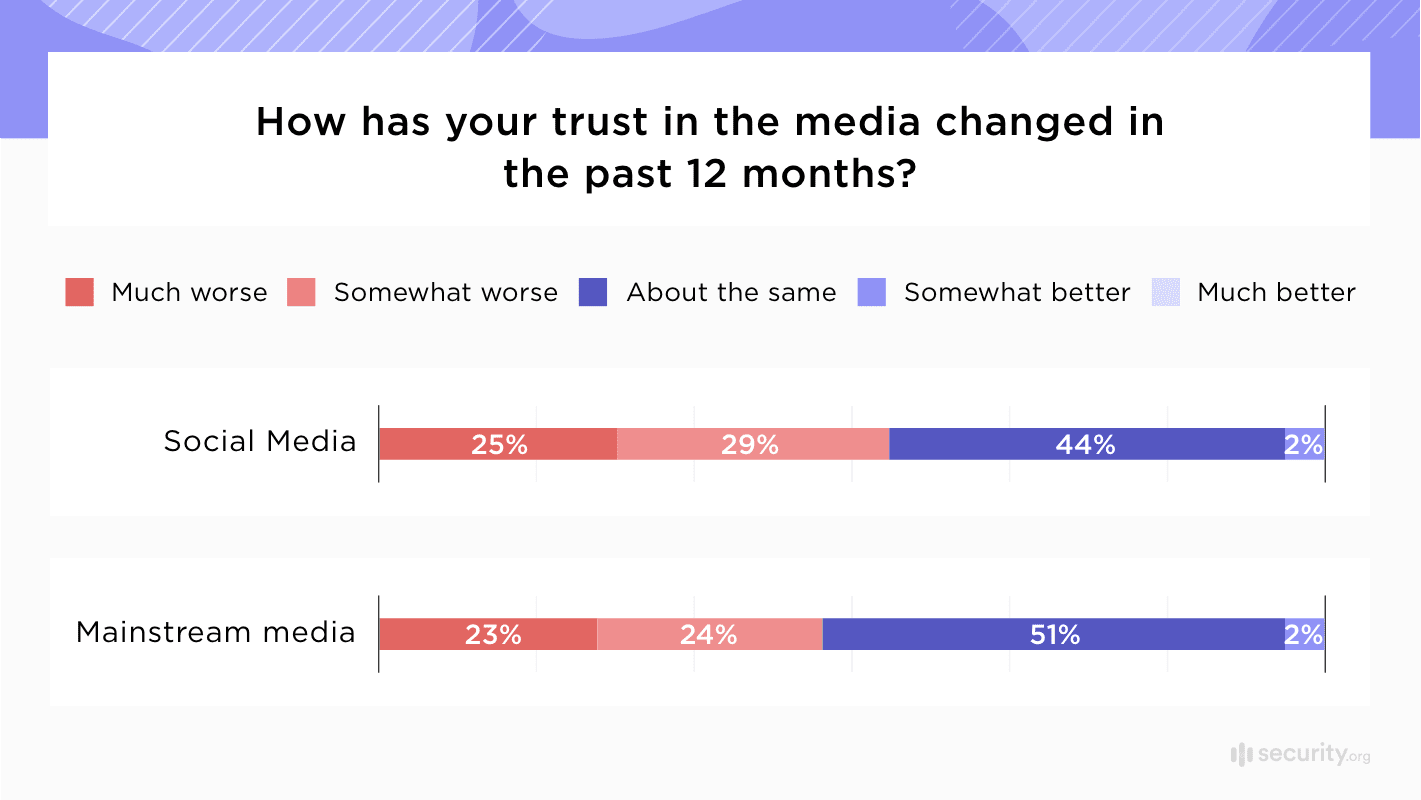 These sentiments were consistent across age groups and genders but differed widely by political affiliation. Following assaults on the mainstream media by GOP leaders, many Republicans have little confidence in mainstream and government information sources. According to our research, 53 percent of Republicans found mainstream news not at all trustworthy, compared to just seven percent of Democrats and 35 percent of independents. 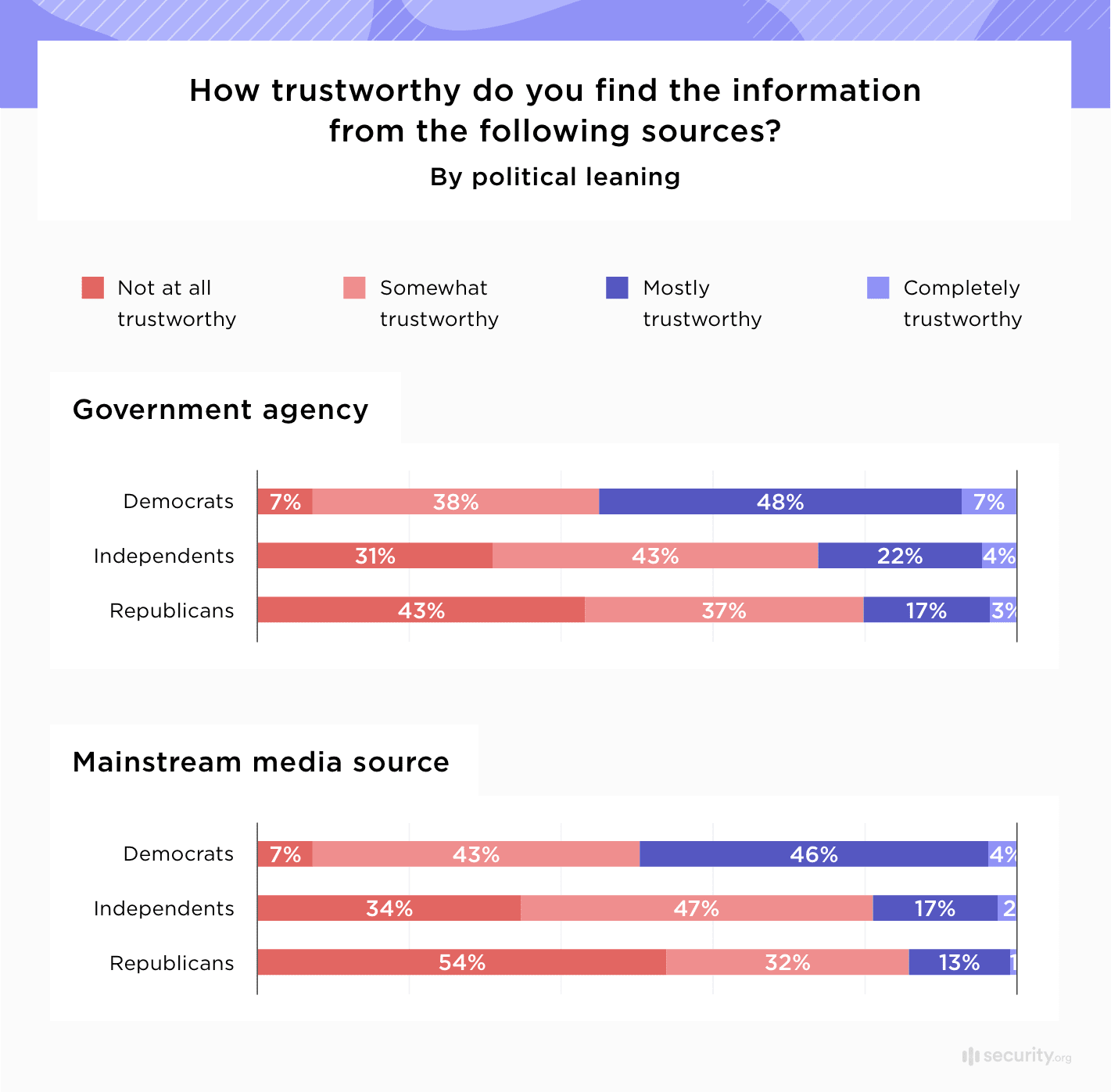 It’s likely that this skepticism has led Republicans to trust personal stories from friends and family as much as articles sourced from multiple experts. Democrats were much more likely to trust expert-sourced articles over personal anecdotes by a 10-to-1 margin compared to Republicans. 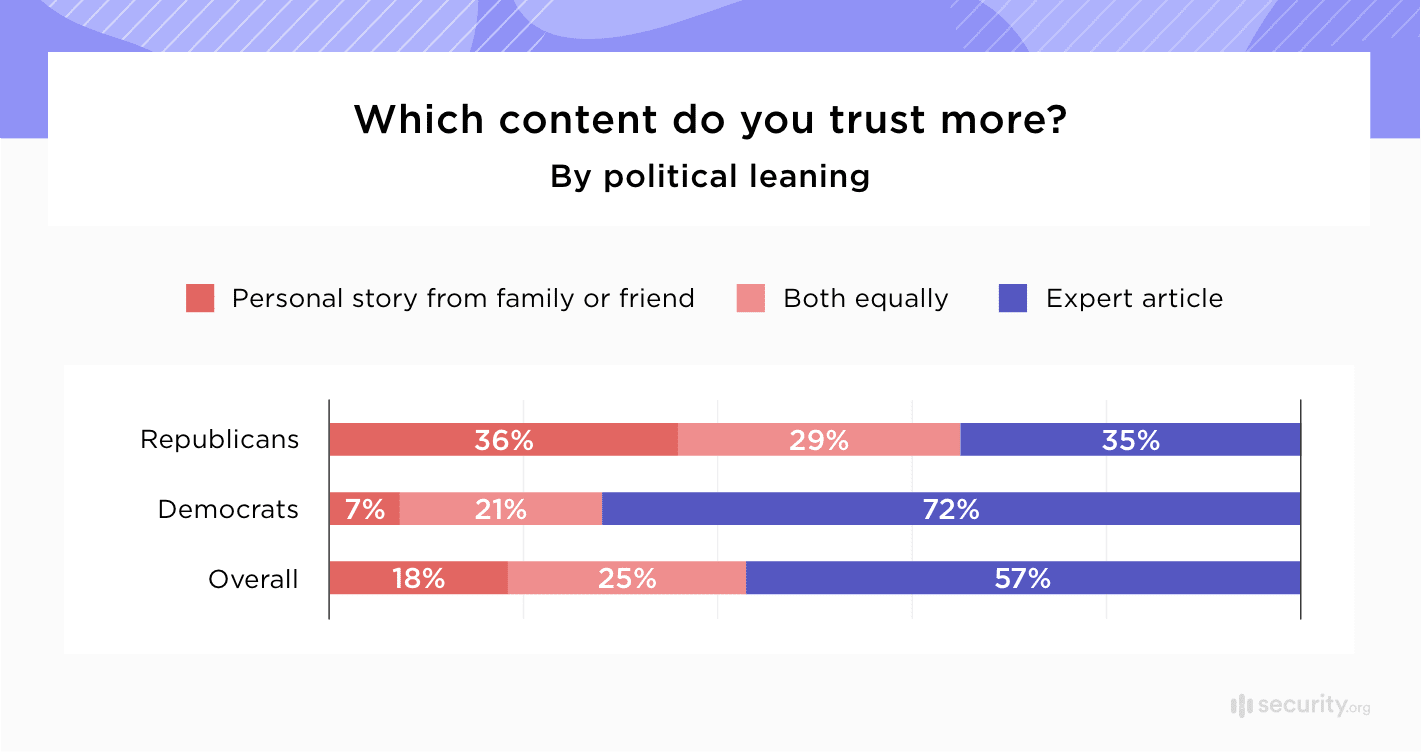 Despite Its Popularity, Few Trust Information on Social Media

Despite social media’s broad popularity, it hasn’t earned the trust of its users. Nearly 200 million Americans interact with social media at least once each day yet a third of them “never” or “rarely” believe what they find.

Among the many platforms available today, Facebook is the social media site consumers trust least. Despite the company’s widely-publicized efforts to eradicate misinformation, 42 percent of Facebook users said they frequently find questionable posts on the platform. Only 10 percent regularly trust content they see on Facebook. 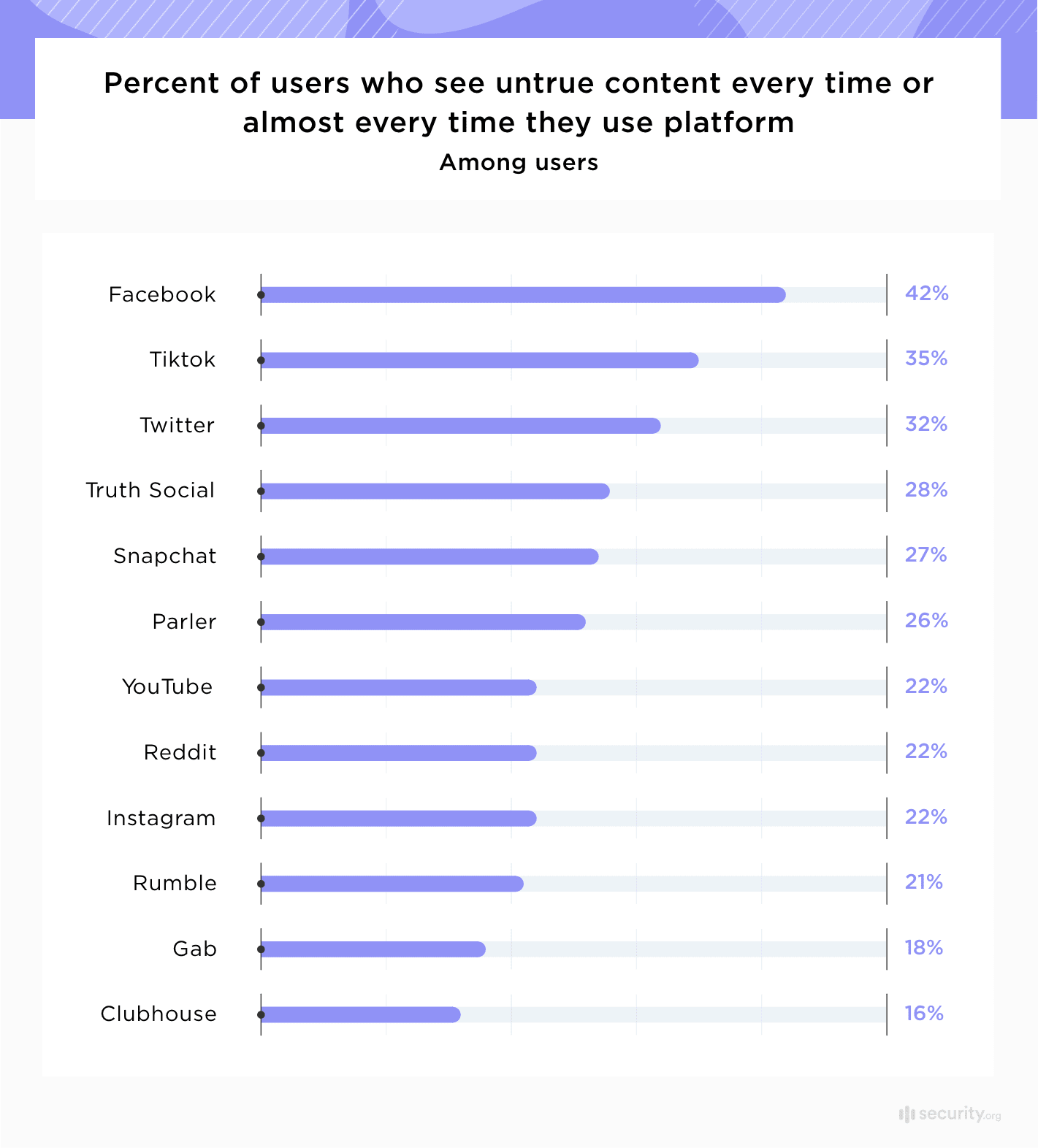 TikTok had the second-highest number of users who frequently saw content they doubted was true. This distrust in TikTok may stem from its Chinese ownership that’s received a great deal of scrutiny from the U.S. government.

Notably, the platforms people had least doubt about represented smaller online communities that tend to self-select along ideological lines, such as the conservative-leaning Gab and Rumble. Where tech giants attract billions of battling users across the political spectrum, these less populated platforms cater to narrower audiences, which could reduce disagreement on facts among their users. The larger audiences of mega social media sites could make them more attractive targets for those actively spreading misinformation.

Americans Are Highly Selective About Which Traditional Media Sources They Trust

Politics also played a significant role in Americans’ views on news outlets, with Democrats and Republicans sharply differing over their most trusted sources. The most trusted traditional news outlets for Republicans and Democrats were unique for each group. People identifying with either political party seem to inhabit separate information bubbles, which means it can be hard for Americans to even agree on the basic facts of news events. 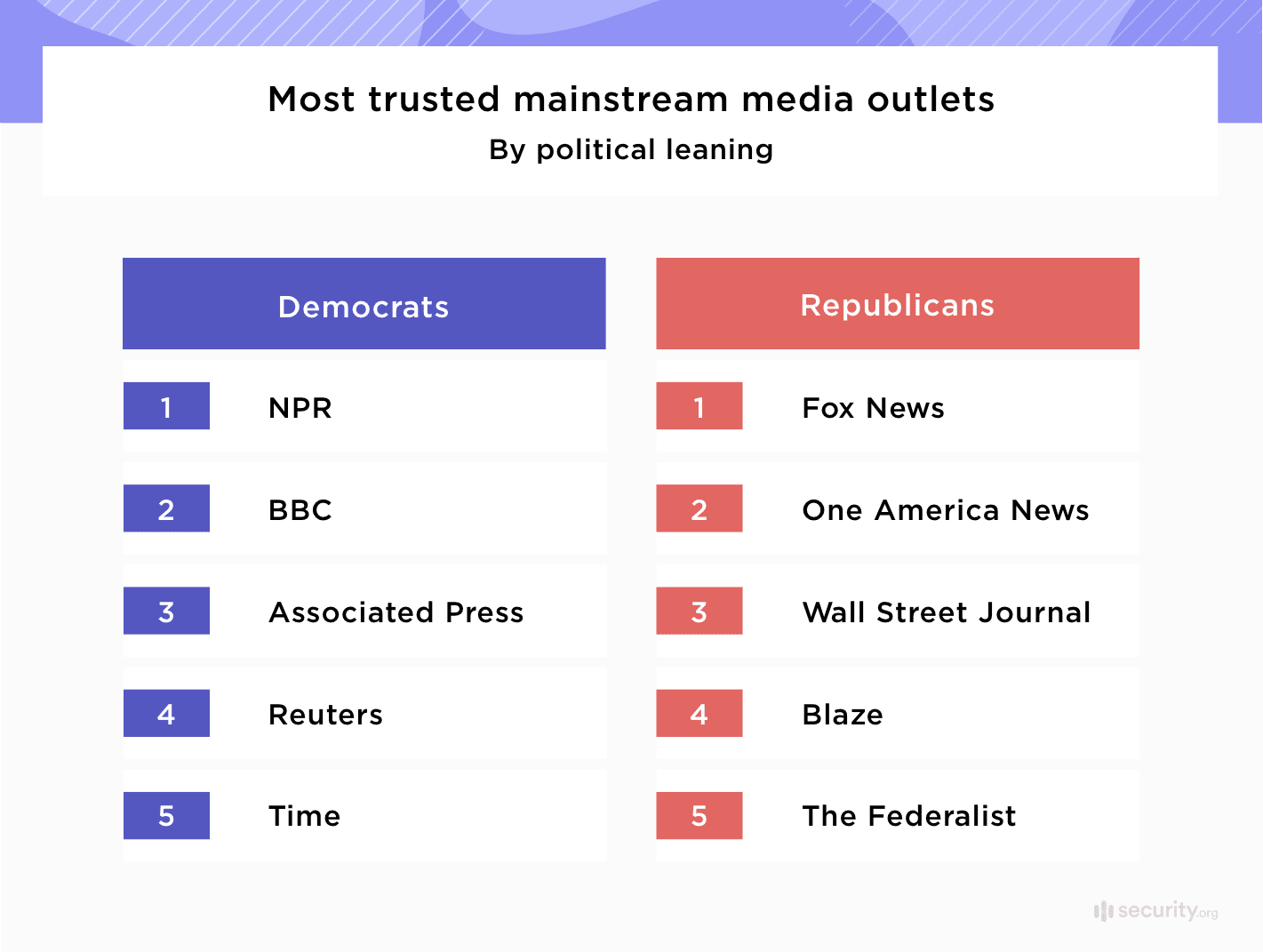 With so few news sources worthy of trust for people across the political spectrum, many people have decided to verify information on their own.

Though Americans are confident in their ability to recognize fake news, current mistrust drives most to verify information they see both in traditional and social media. Nine of ten consumers use at least one method to check that the information they read is accurate.

Overall, Americans relied on a few main methods for verifying information they found questionable on social media and TV news or news articles. Doing a web search was the most popular way people sought out further information about a news event, and reading multiple articles on the same topic was also a common verification practice. 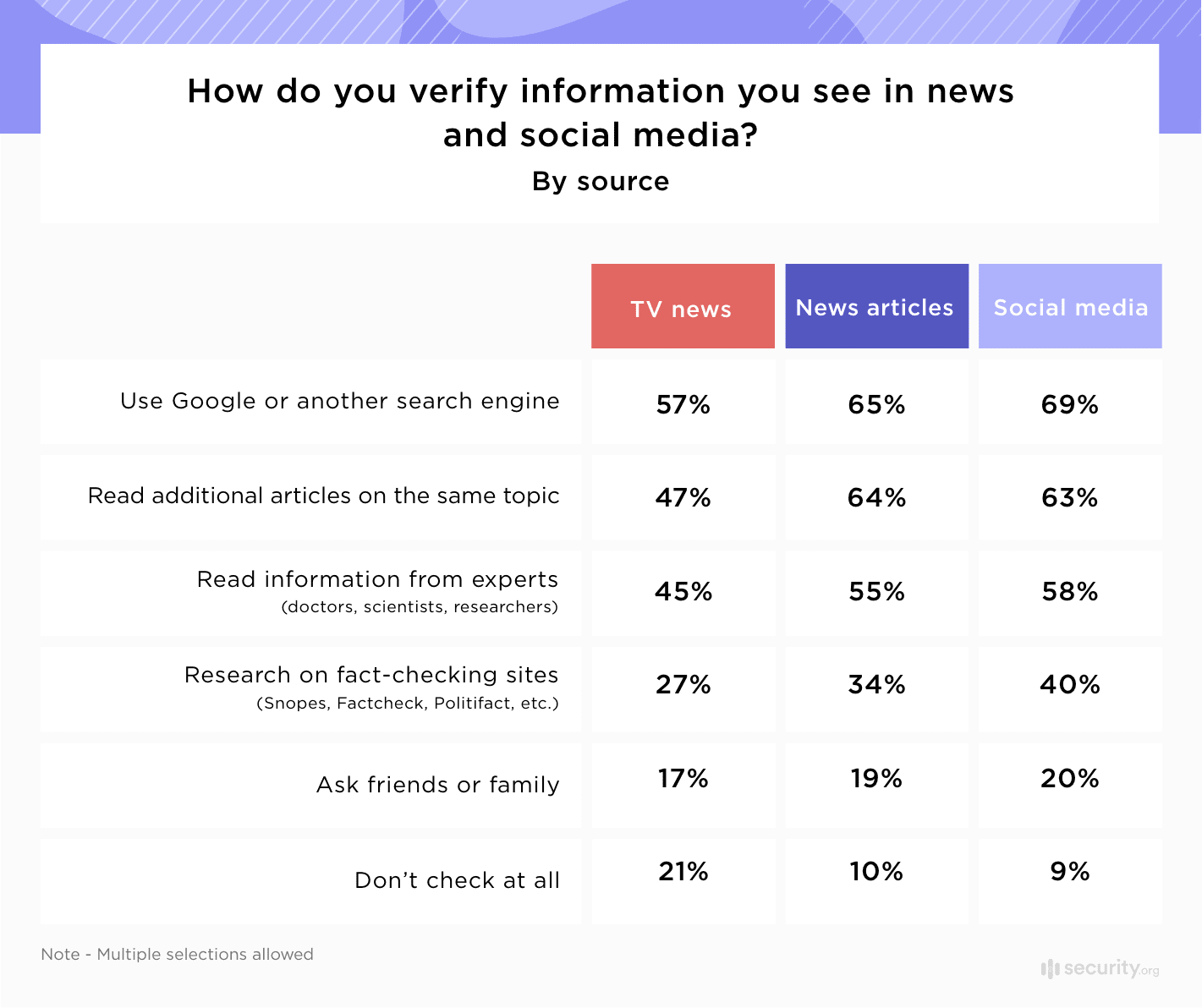 Though cable news outlets weren’t considered trustworthy by many in our study, people were least likely to verify information on TV news compared to information from news articles or social media posts. This is likely due in part to the nature of TV news: when reading news on a computer or phone, more information is just a few clicks away. TV audiences also tend to stick with politically aligned networks that provide confirmation bias, which can create little desire for scrutiny. Additionally, daily television viewers were eight years older than daily social media users on average, and we found that older media consumers were less likely than younger consumers to verify news information.

Overall, we found most Americans try to verify information that they read. However, they’re less careful with the information they share on their social networks.

Not Everyone Checks Information Before Sharing It on Social Media

Americans agree that misinformation is a problem: 96 percent want false facts contained. Unfortunately, many of these people also share unverified posts with their own social networks, and few agree on who should be responsible for policing the issue. 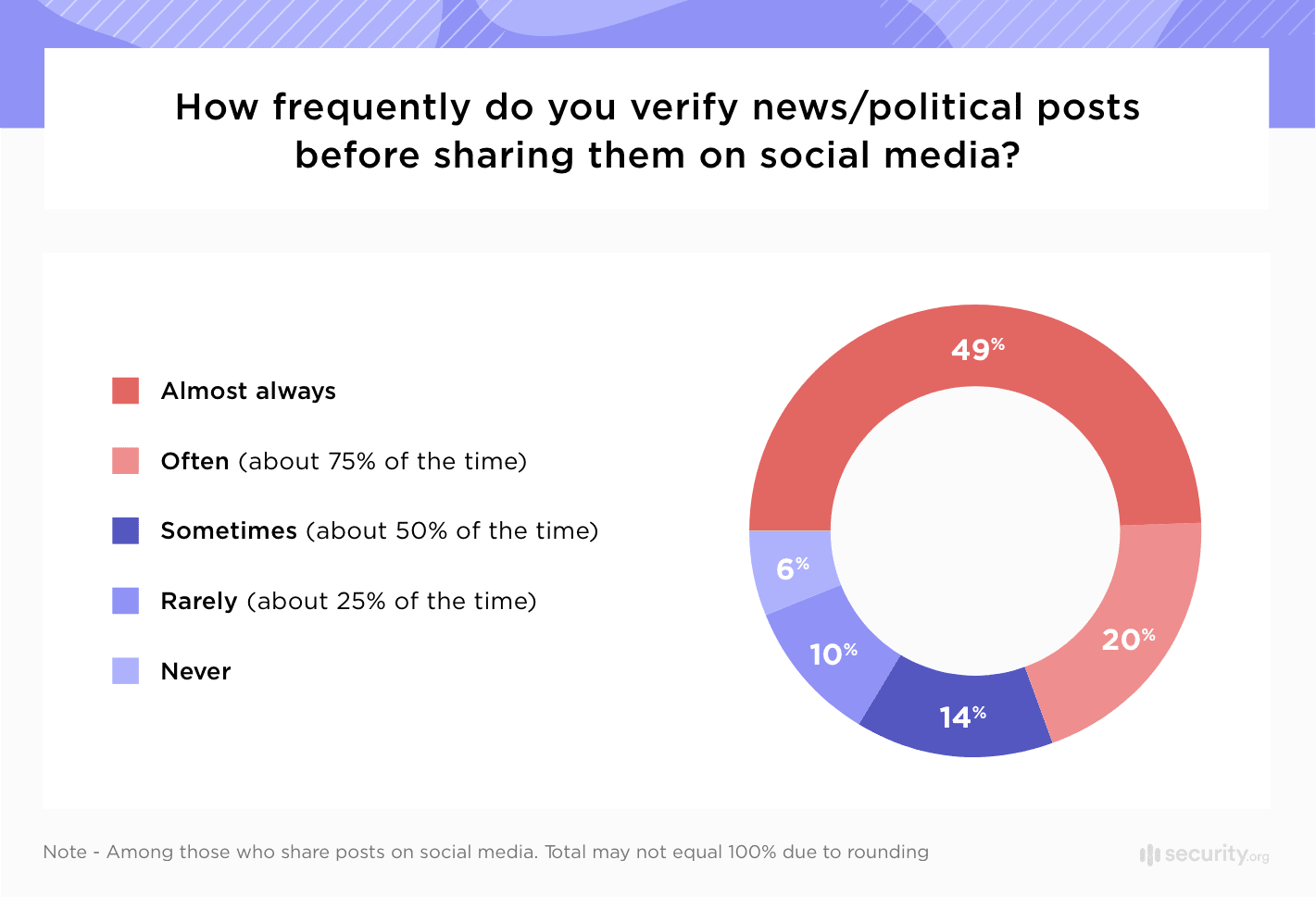 Despite this evidence of personal irresponsibility, nearly all Americans believe someone should stop the spread of misinformation. Opinions varied, however, about who should be in charge of the massive task. 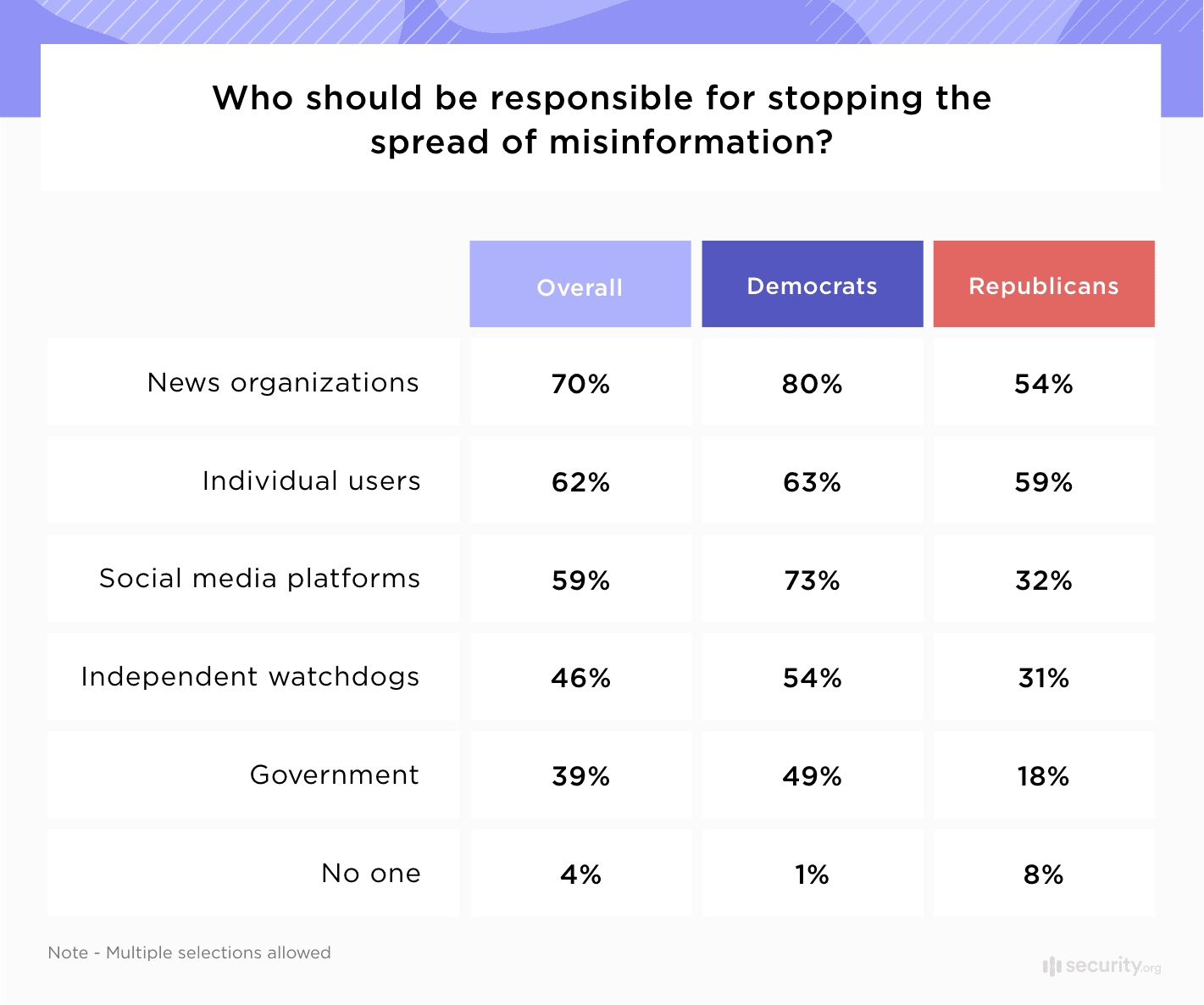 Across the board, Democrats were more likely than Republicans to believe that groups like the government, news media, and independent watchdogs should be responsible for stopping the spread of false information. Older Americans were more likely to support independent review, while younger respondents preferred trusting the government with the difficult job of finding and eliminating misinformation in the media.

Stopping the Spread: How You Can Help Fight Misinformation

With media mistrust running high and responsibility fractured, Americans need ways to police “fake news”. Misinformation and disinformation can be very deceiving and can spread far more quickly than truth, so we all must play a part in shutting down falsehoods, especially in a midterm election year.

Security.org developed an informative guide for protecting against misinformation, which advocates using your head, using available information, and being a responsible cyber-citizen.

The First Amendment provides broad protection to media outlets and special legal provisions shield tech companies from liability for the content shared on their sites. Americans treasure these speech and press freedoms but resent the spread of misinformation they allow.

The big loser in this battle is the public. Our survey shows Americans are increasingly distrustful of media sources, expend great effort to verify facts, and yearn for some entity to take responsibility for limiting the circulation of lies.

Security.org conducted an online survey of 1,004 U.S. residents aged 18-74 in June of 2022. The median age was 45. Respondents were representative of the U.S. population in terms of gender, age, and ethnic background. 53 percent of respondents were Democrats, 23 percent were independents or belonged to no party, and 24 percent were Republicans.