2020 marks the 100th anniversary of the adoption of the 19th Amendment to the U.S. Constitution, which guaranteed women the right to vote. While women had been permitted to vote in some states and cities, there were no protections on the national level until the 19th Amendment became part of the Constitution on Aug. 26, 1920.

The passage and ratification of the amendment is seen as a pivotal turning point in the women’s rights movement, and while much progress certainly has been made over the past century, women, especially women of color, still face workplace discrimination, make less money on average and are subject to medical restrictions and scrutiny that men are not.

A patchwork of laws and customs exist on the state level in this country, which makes it almost impossible to draw national conclusions about Americans’ views toward how free American women really are. Still half of Americans believe that as a country, we haven’t gone far enough in establishing gender equity. In that same poll, 1 in 10 said they think we’ve gone too far, so it’s fair to say it’s a mixed bag at best.

We wanted to examine where women’s rights are strongest in the U.S., so we looked at things like income levels, educational achievement, reproductive rights and political representation to create a best-to-worst ranking of each state and the District of Columbia. While some states certainly performed better than others, the truth is that no state stood out as being the far-and-away leader in women’s rights and every state has ample room for improvement.

Where Each State Ranked

At the bottom of this page, you can see details on the methodology of our study, but here’s a quick explainer so that these rankings make sense: We compared metrics on income, employment, business ownership, educational attainment, lifespan, reproductive freedom, maternal mortality, voting and political representation to produce a numerical ranking for every state in which higher numbers represent a better situation for women.

D.C. had the highest overall score with an average of 65.7%, while the bottom-scoring state was Louisiana at 38.6%. Geographic representation is mostly mixed, though it’s notable that eight of the bottom 10 states are in the South. Still, of the top 10 states, many regions of the U.S. are represented (northeast, midwest, west, mountain and southwest), and the median national score was 47.3%. 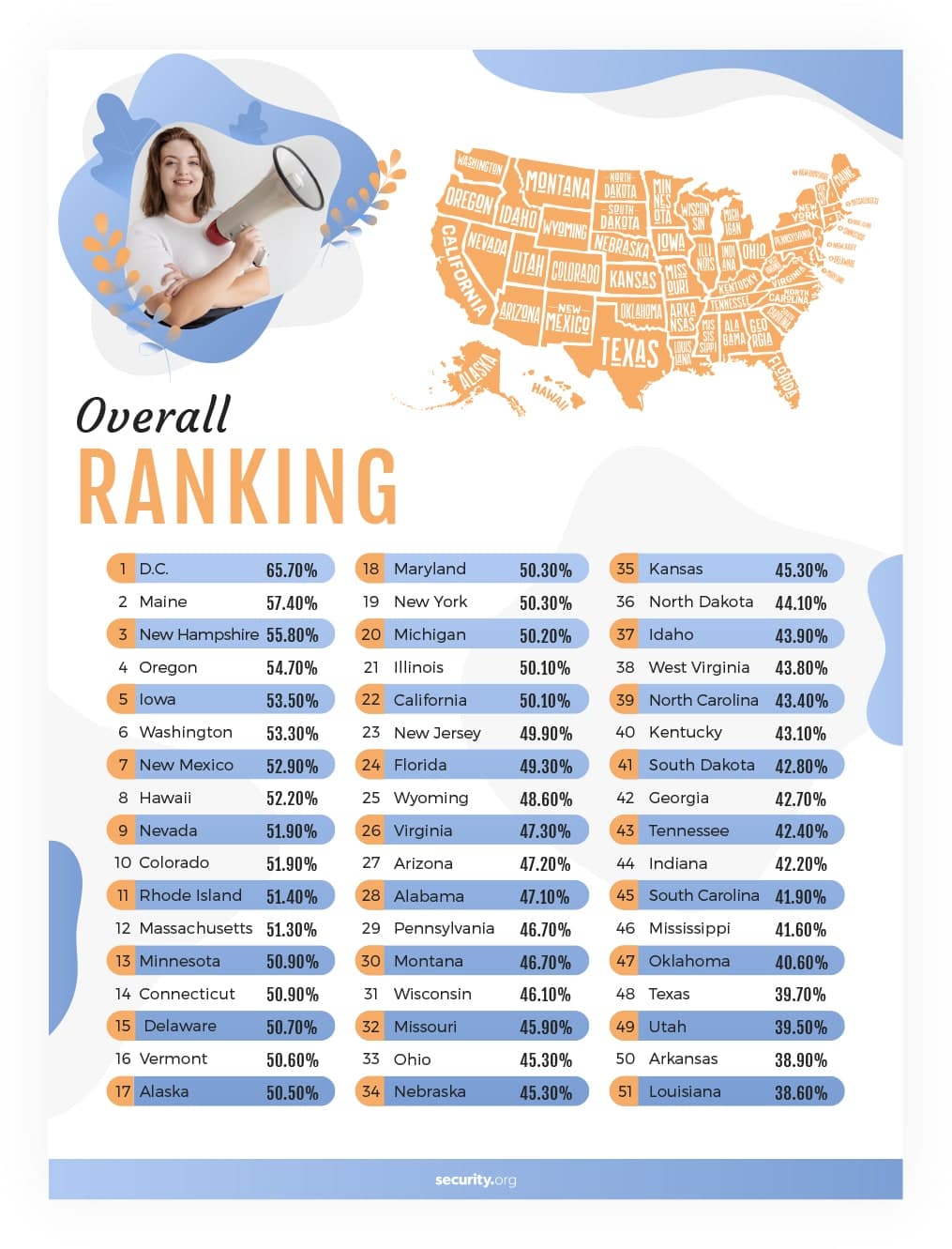 Economic freedom doesn’t mean being independently wealthy, though few would of us would reject that option if it were available. Rather, economic freedom is related to having the individual means to make your own decisions about your everyday life without the financial influence of someone else. Women who lack employment or have low income levels are largely unable to make crucial decisions for themselves.

So to calculate where in the U.S. women have the highest degree of economic freedom, we looked at median earnings of women relative to the overall median individual earnings in each state, the percentage of women 16 and older who are employed and the percentage of employer firms in the state that are owned by women. 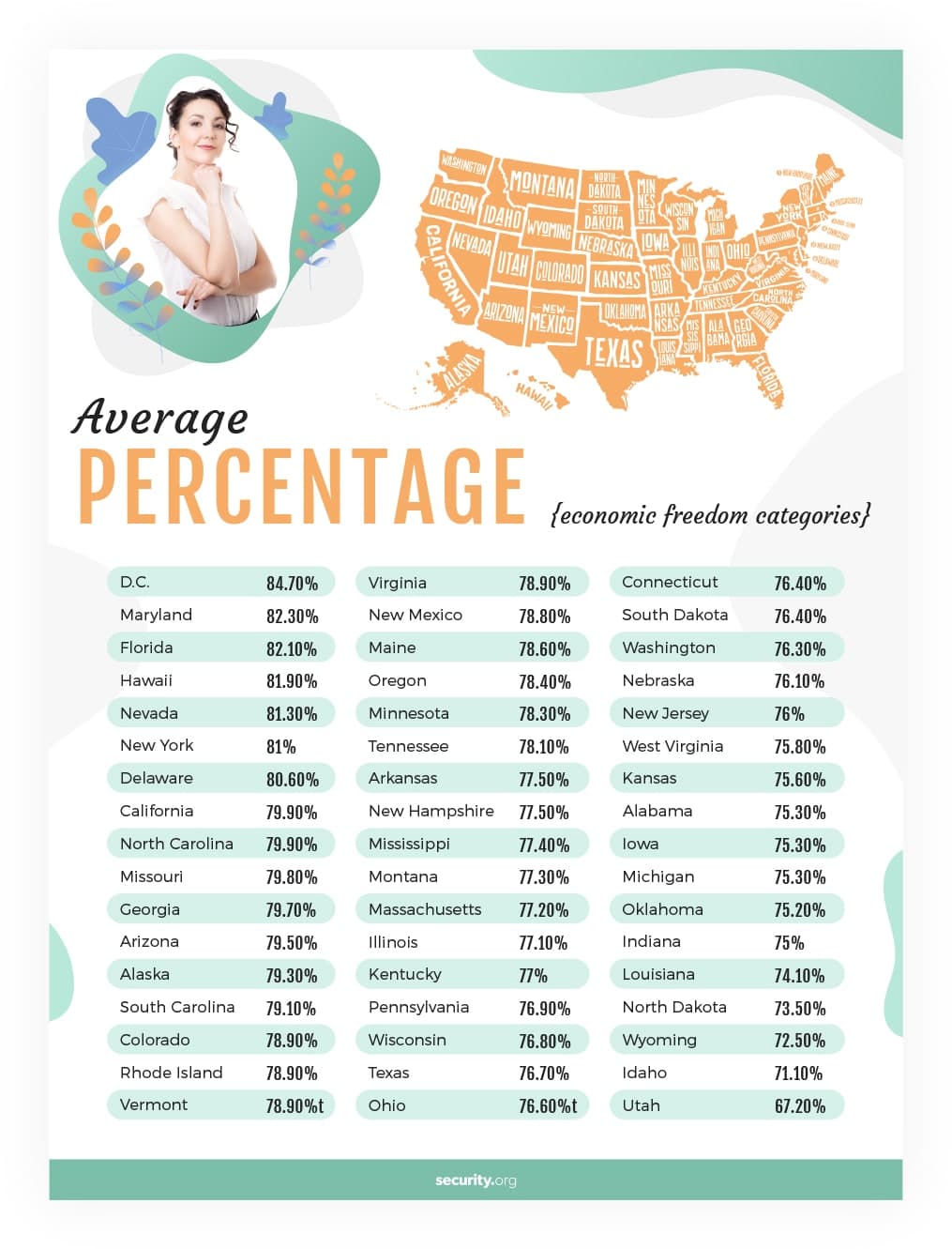 Nationally, about 47% of women 16 and older are employed, compared to about 53% of men. Even the best-performing states on our list don’t do much better than the national figure in this area. 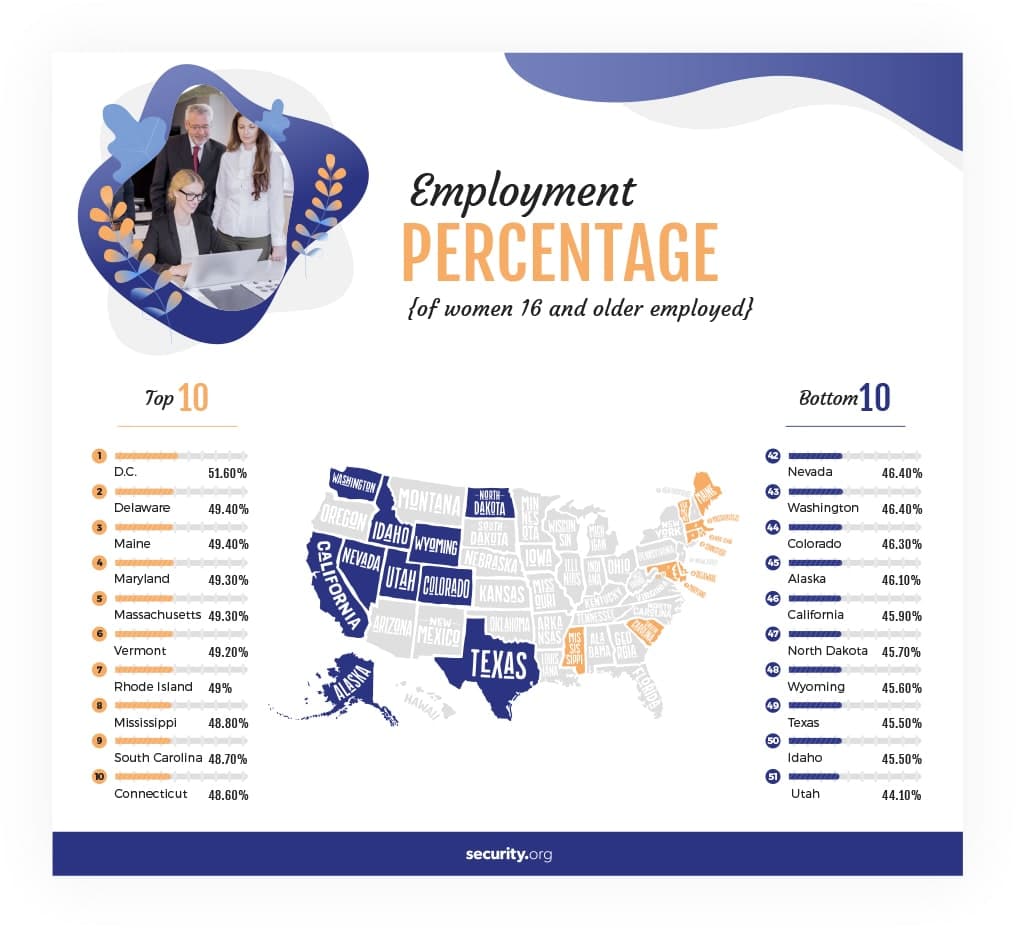 The median individual wage in the U.S. is just under $34,000, but the median for women is about 17% lower than that. While the wage gap is accepted as reality by many people, others dispute that it exists (or that it’s a problem). Still, a plain reading of the data clearly shows us that the average woman earns less than the average man in every state in this country but that for some women, the gap is narrower. 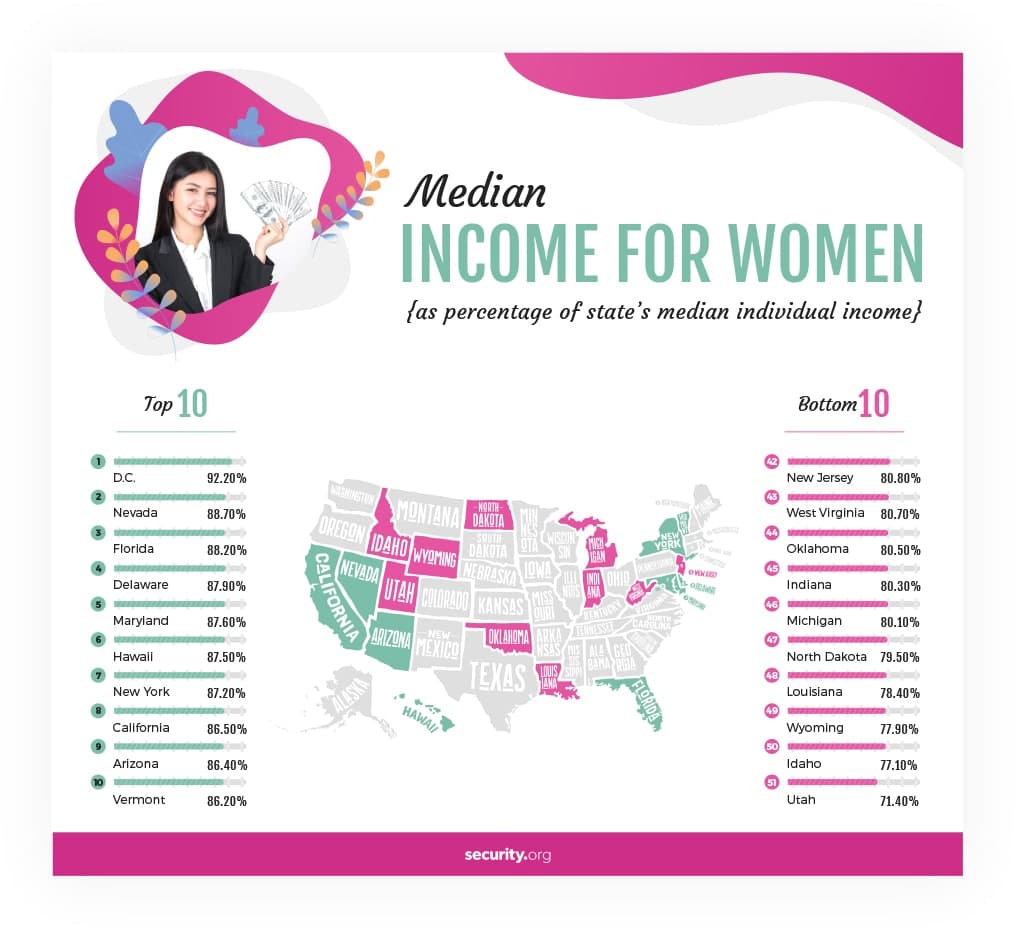 It’s worth noting here that while the average woman makes about 72% what the average man makes, the picture changes significantly when considering disparities related to race and ethnicity. You should also note this number differs from what’s quoted in much of the coverage related to the gender wage gap, and that’s because we’ve included earnings by all workers, not just full-time wage employees, since that’s a group that’s seemingly shrinking by the day. 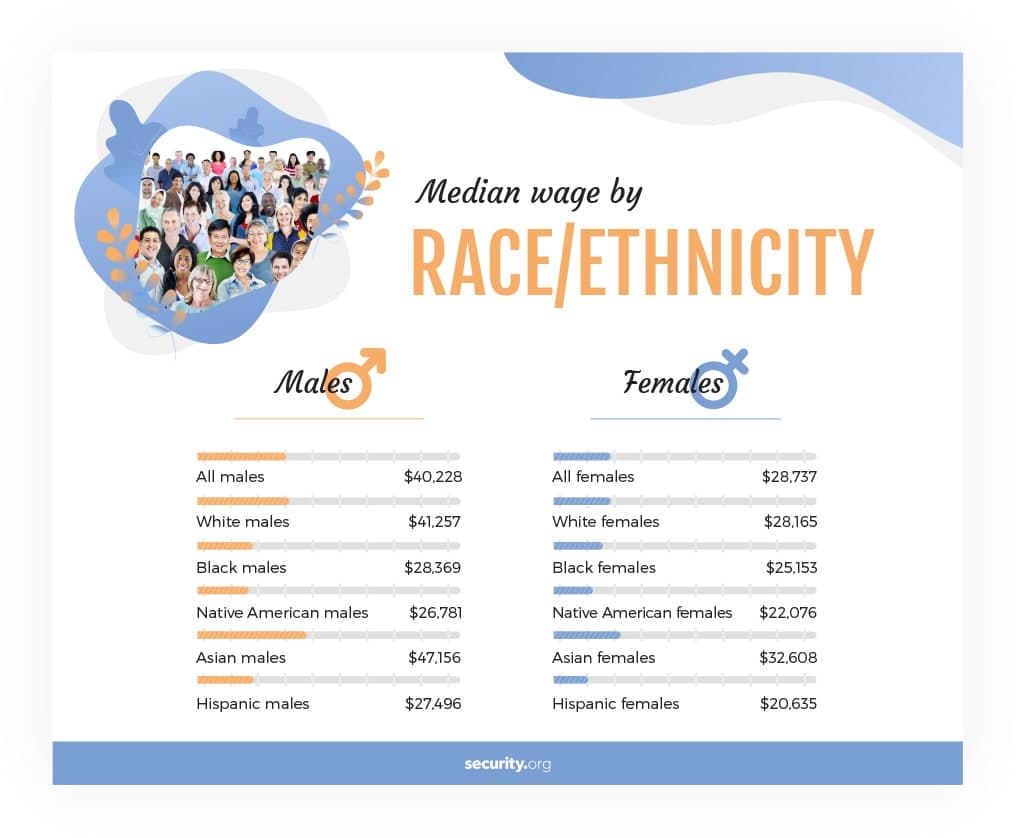 Working for a living is all well and good, but building real wealth often means owning your own business, and female-owned businesses generate nearly $2 trillion in sales every year. Which states are most friendly to female business owners? 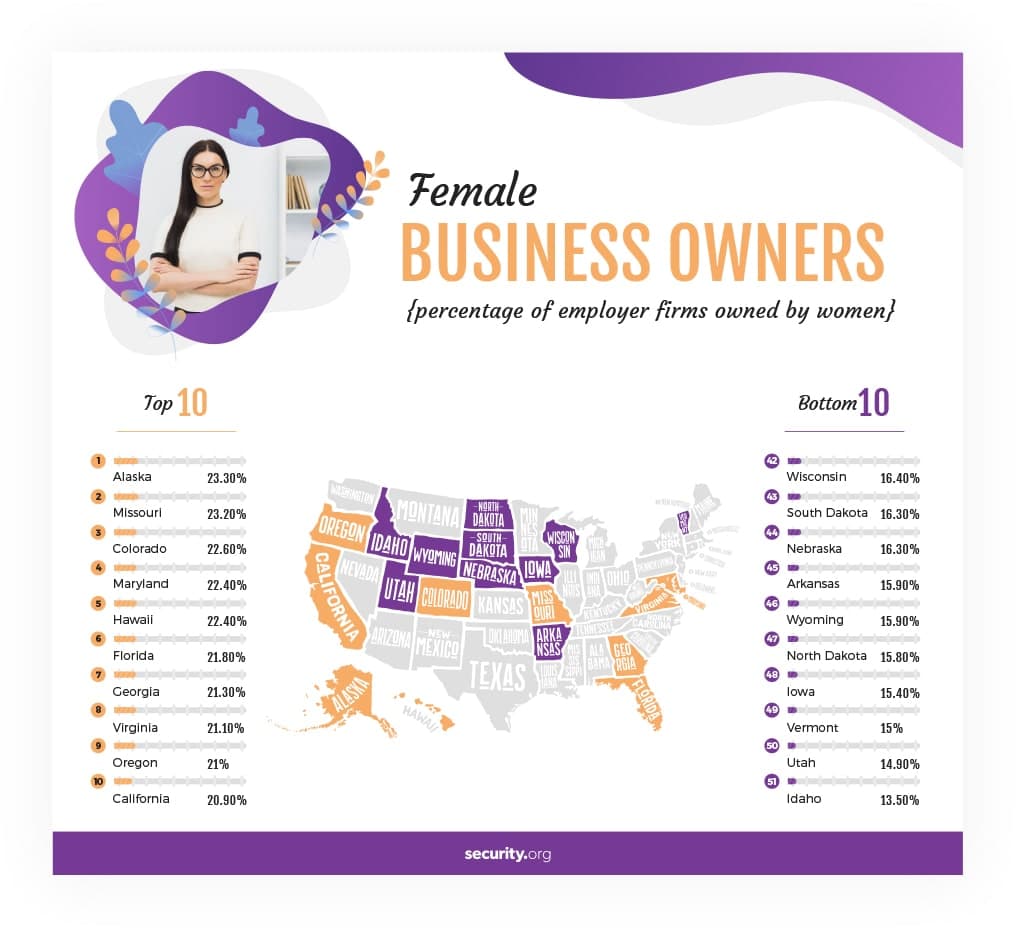 If income is the single biggest predictor of a person’s quality of life, education is surely close behind. After all, those with higher levels of educational attainment tend to make more money over the course of their lives. 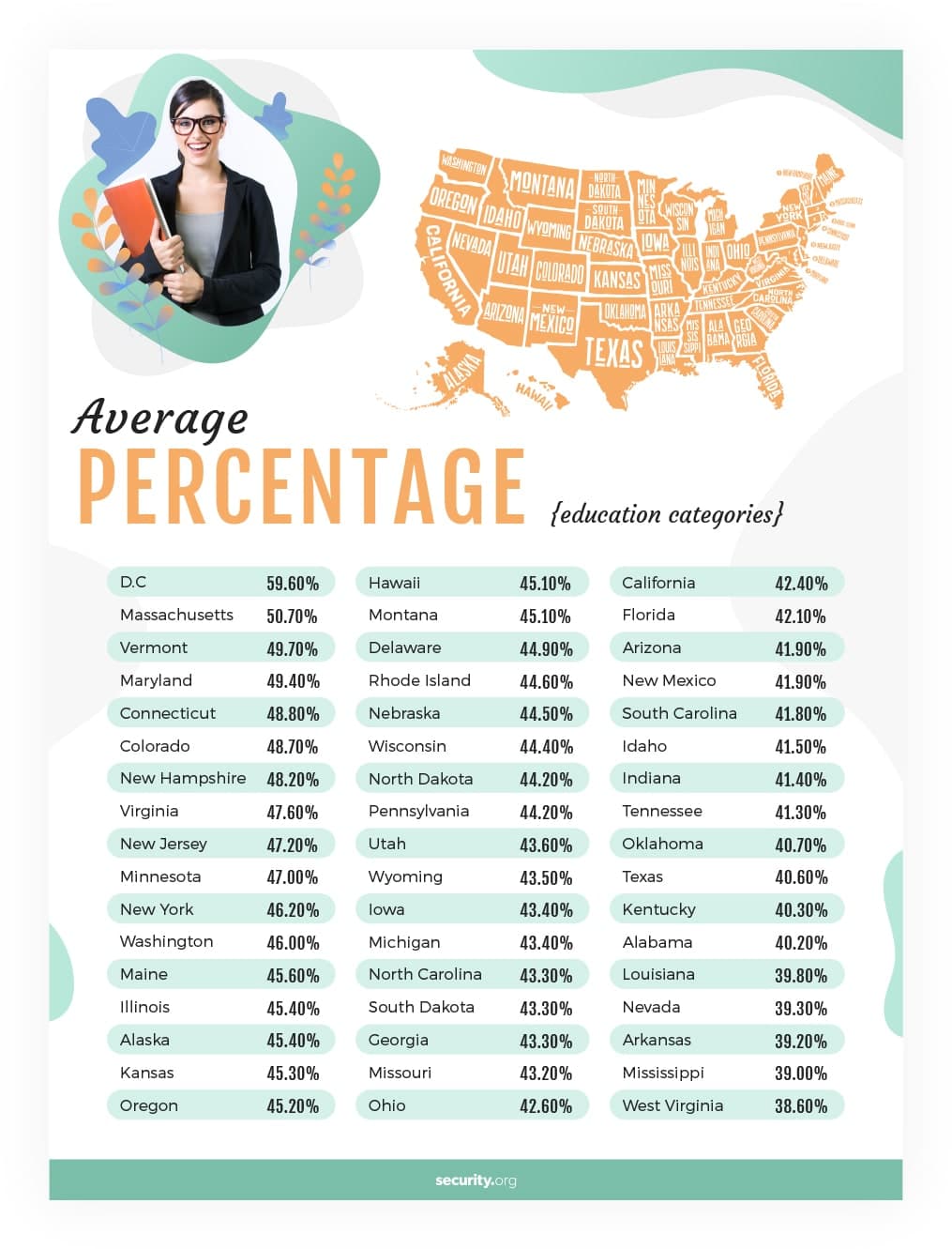 Nationally, about 87% of American adults have high school degrees and more women (88%) than men (86.6%) have finished high school. 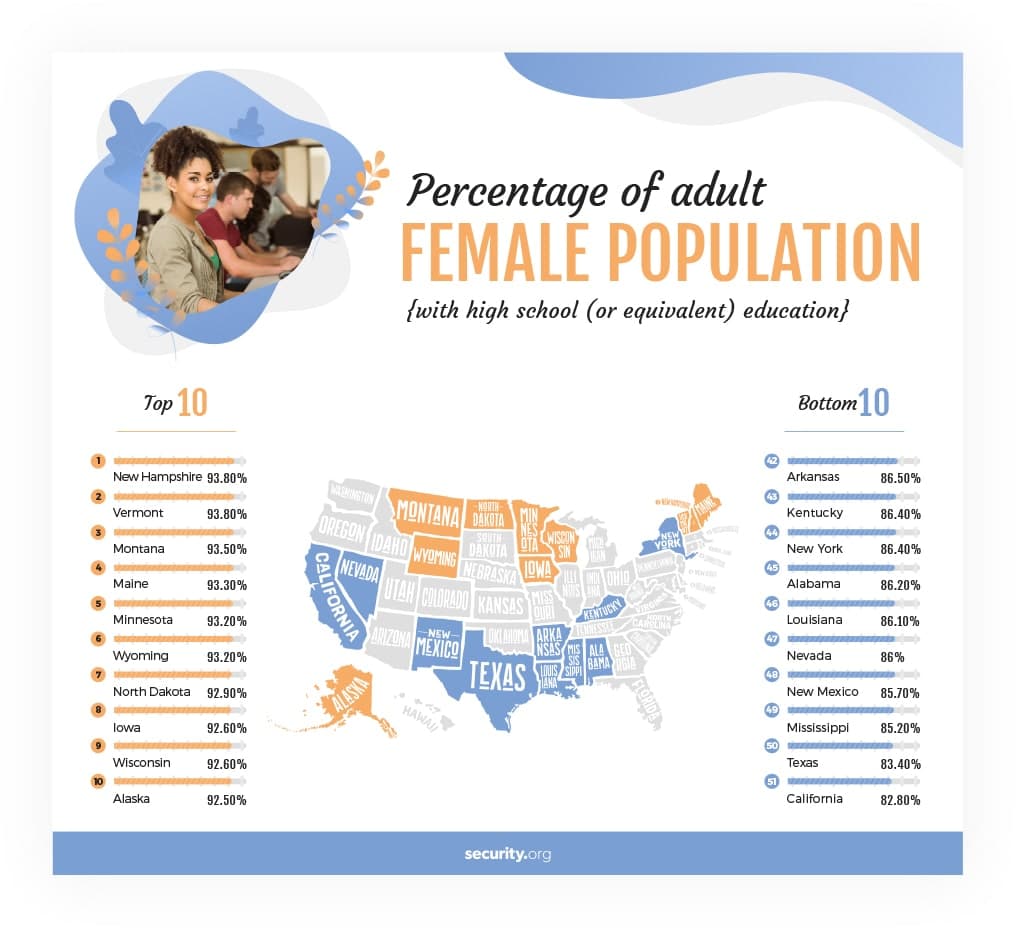 Just over one-third of Americans have earned their bachelor’s degrees, and more women (31.2%) than men (30.6%) have completed undergraduate education. 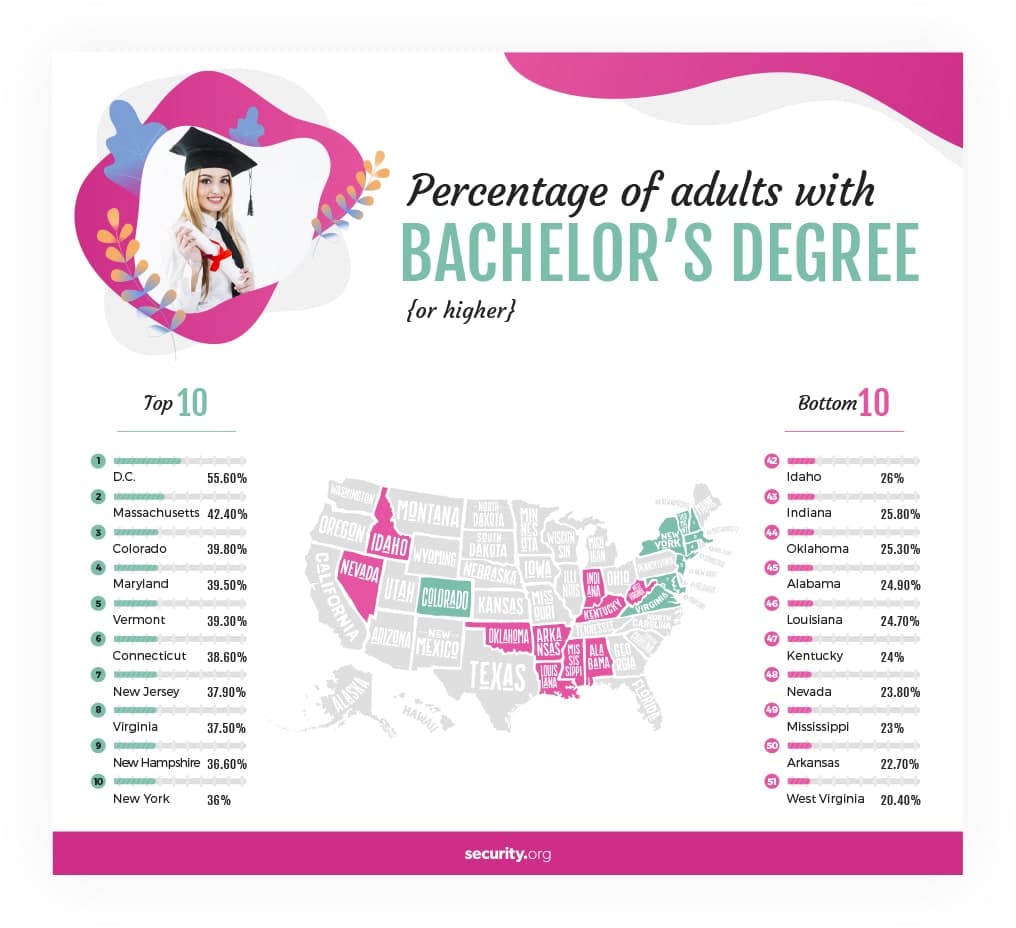 About 1 in 10 Americans have earned advanced or professional degrees, including master’s degrees, doctorates, law degrees and medical degrees, and those with such degrees earn by far the highest median wages of any Americans (about $86,000 per year). 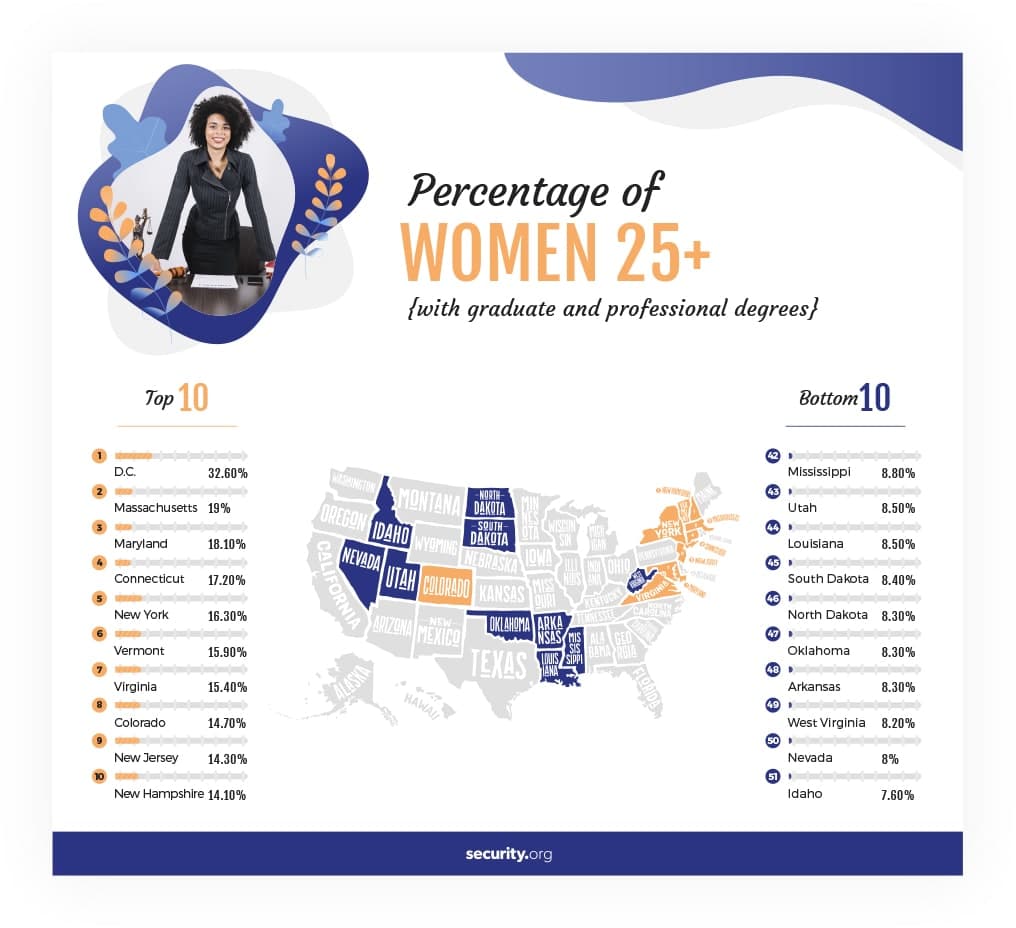 Women live, on average, several years longer than men, but the biological differences between men and women create some varying health concerns. After all, men can’t get pregnant, so issues related to maternal health or reproductive rights are less of a clear-and-present concern for those without uteruses.

To create our ranking in this area, we looked at maternal mortality rates, lifespans (female lifespan as percentage of overall state median) and restrictions on abortion rights (calculation of four major areas of restriction). 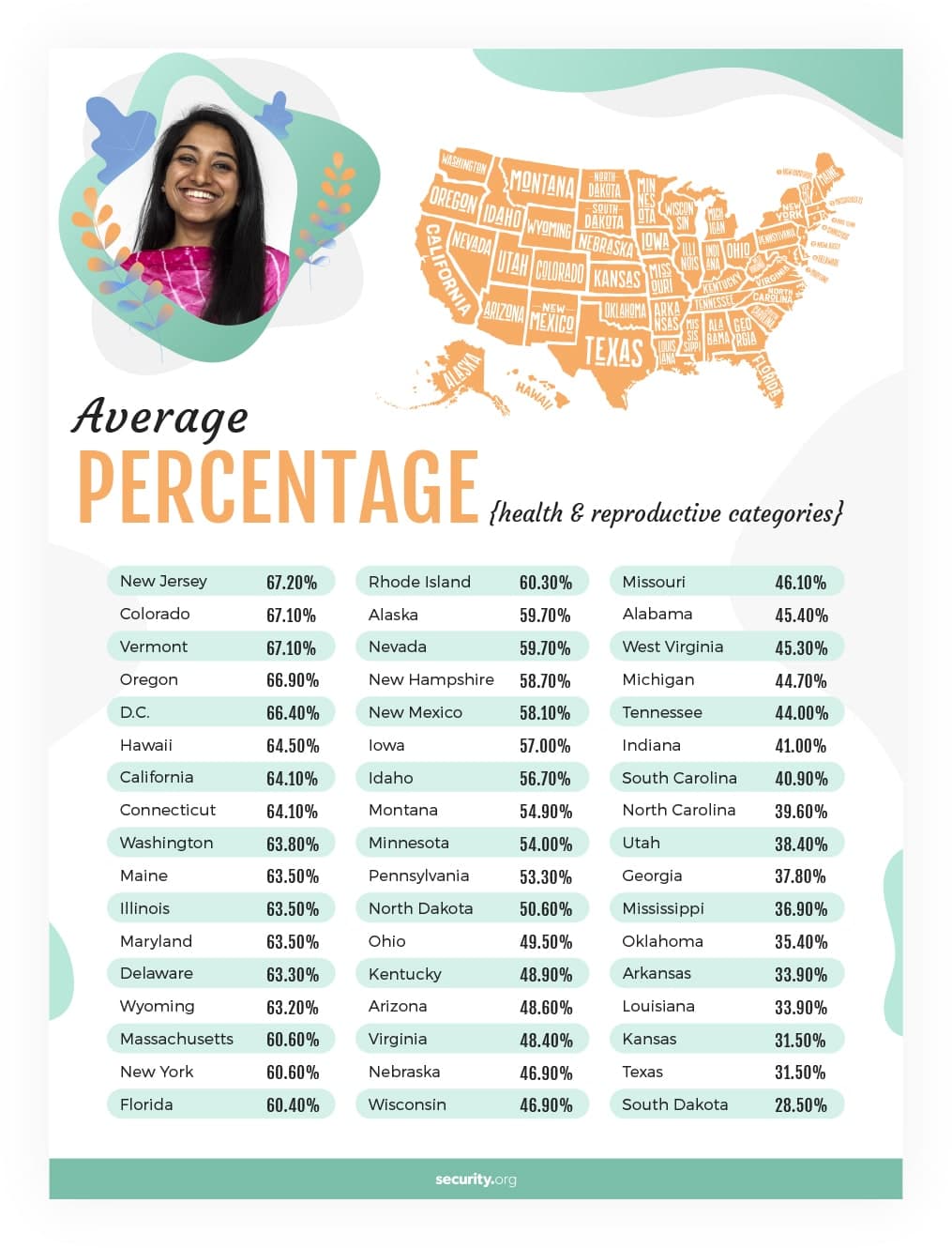 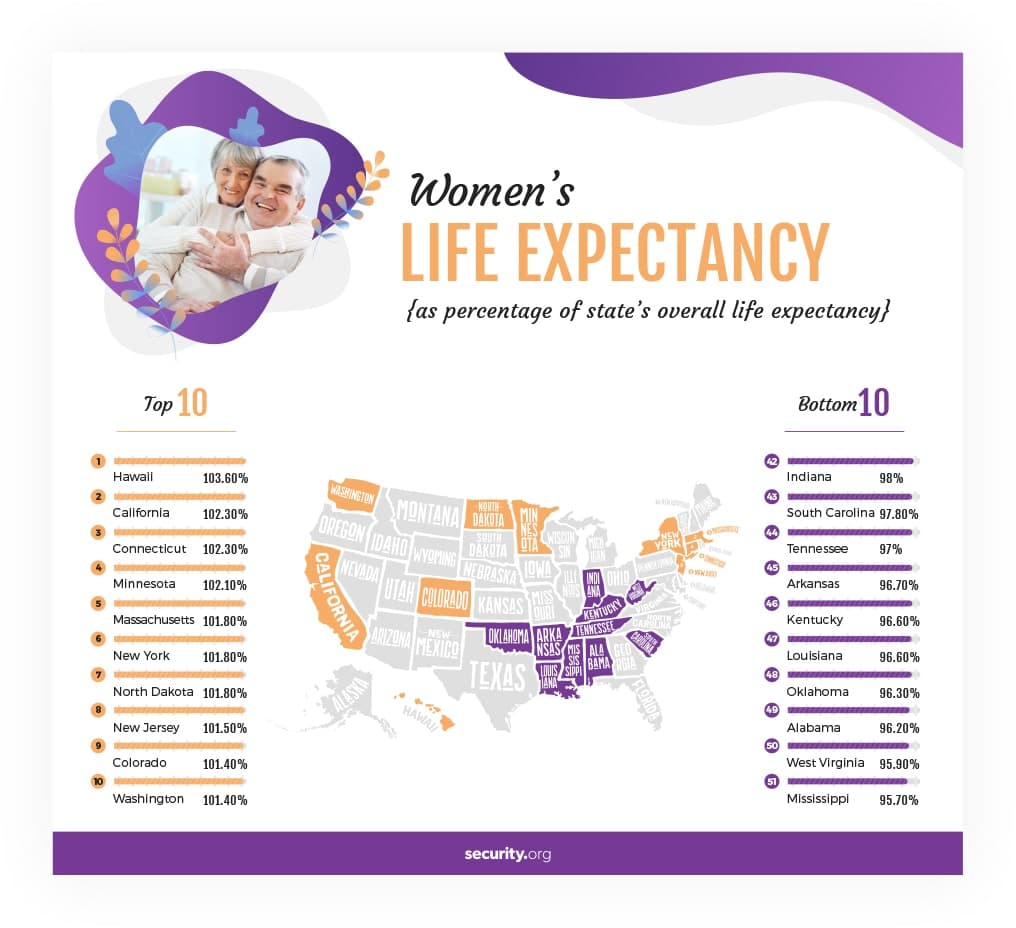 Despite broad improvements in health outcomes for babies and children in the U.S. over the past few decades, maternal mortality rates in the U.S. have increased by nearly 68% between 1990 and 2017. That makes the U.S. one of only eight countries in which the rate increased. 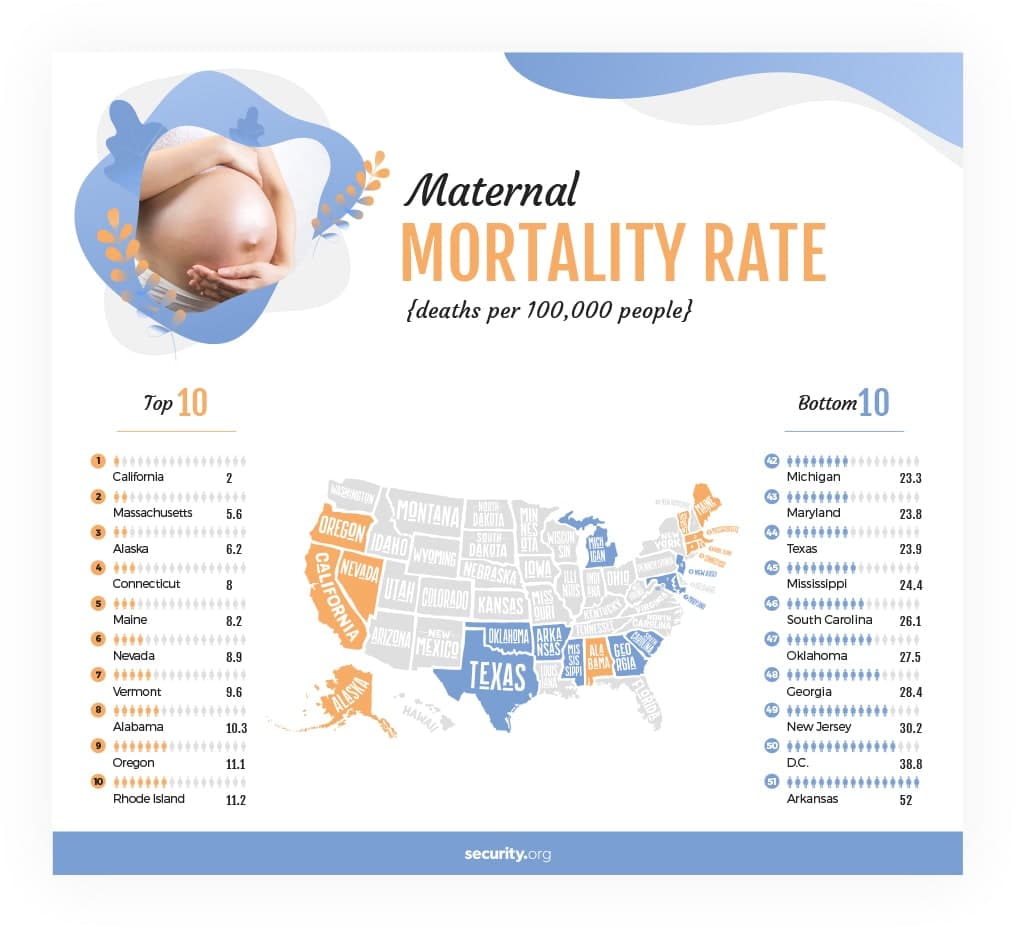 Only a handful of states place little to no restrictions on access to abortion services, while other states have put in place limits on gestational age and late-term abortions, waiting periods and counseling requirements. While these are far from the only restrictions that are in place, for the purposes of our study, they are the ones most likely to impact an individual woman’s ability to obtain an abortion. To quantify restrictions in the states, we assigned percentages to the areas included in our study and totaled those values for each state. We then subtracted those figures from 100 to see how restrictive each state is. The lower the score, the more restrictive the state. 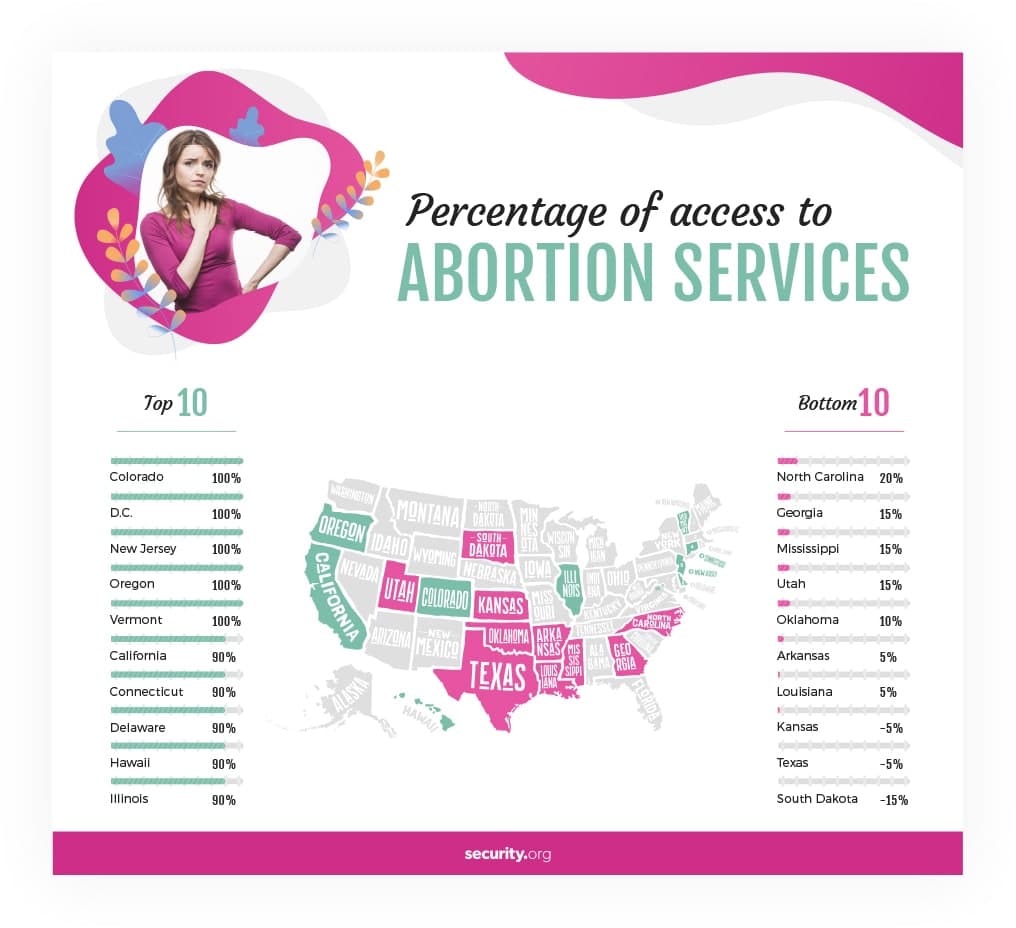 Jeannette Rankin was elected to the House of Representatives from the state of Montana in 1917, three years before American women were guaranteed the right to vote. Since then, nearly 400 other women have been elected to Congress, and women have continued to play a hugely influential role in politics, whether by serving in elected office or by voting. 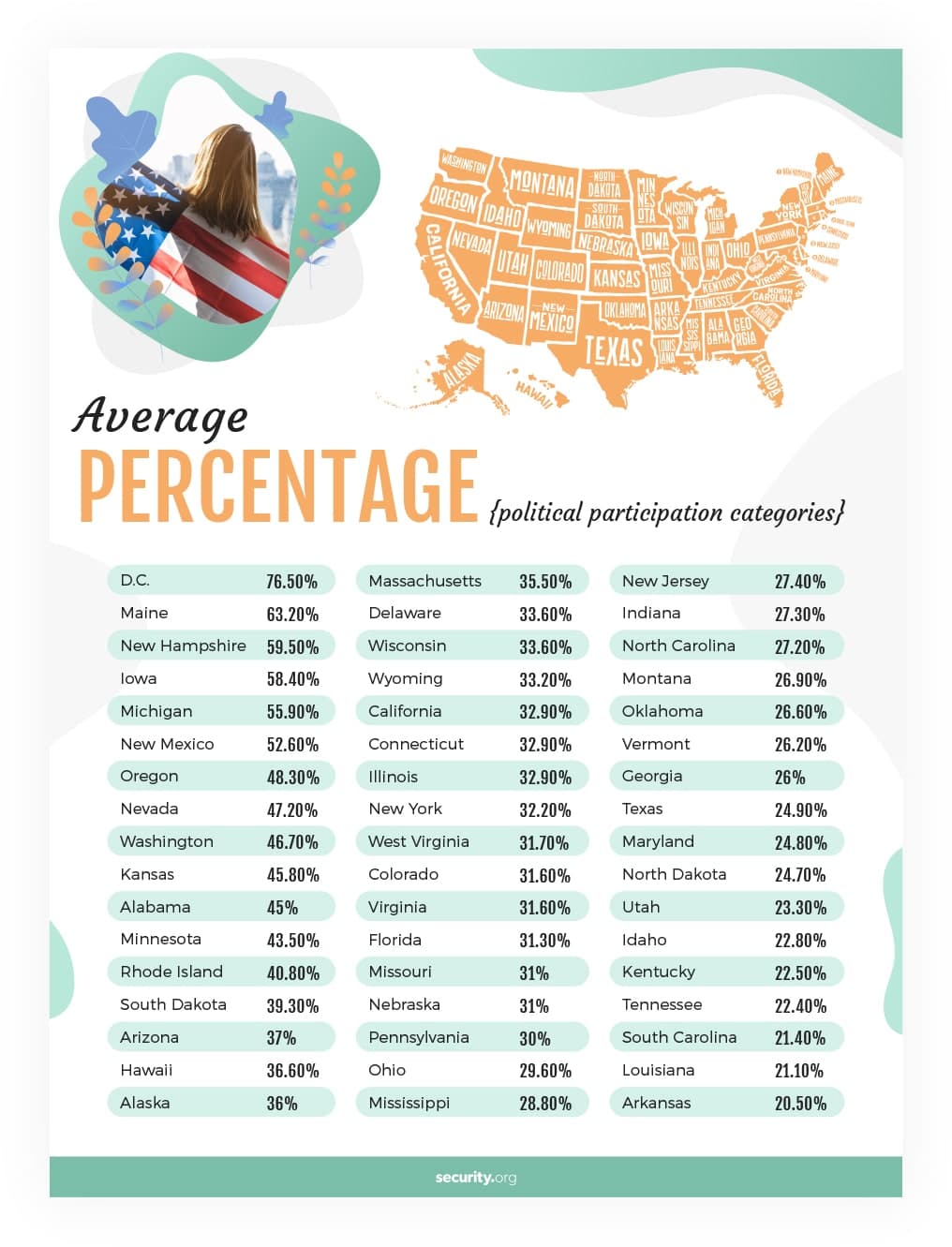 Recent national elections have seen higher turnout among women than men, and with women constituting a slightly larger overall proportion of the overall population, it seems clear women are amplifying their voices in the ballot box. 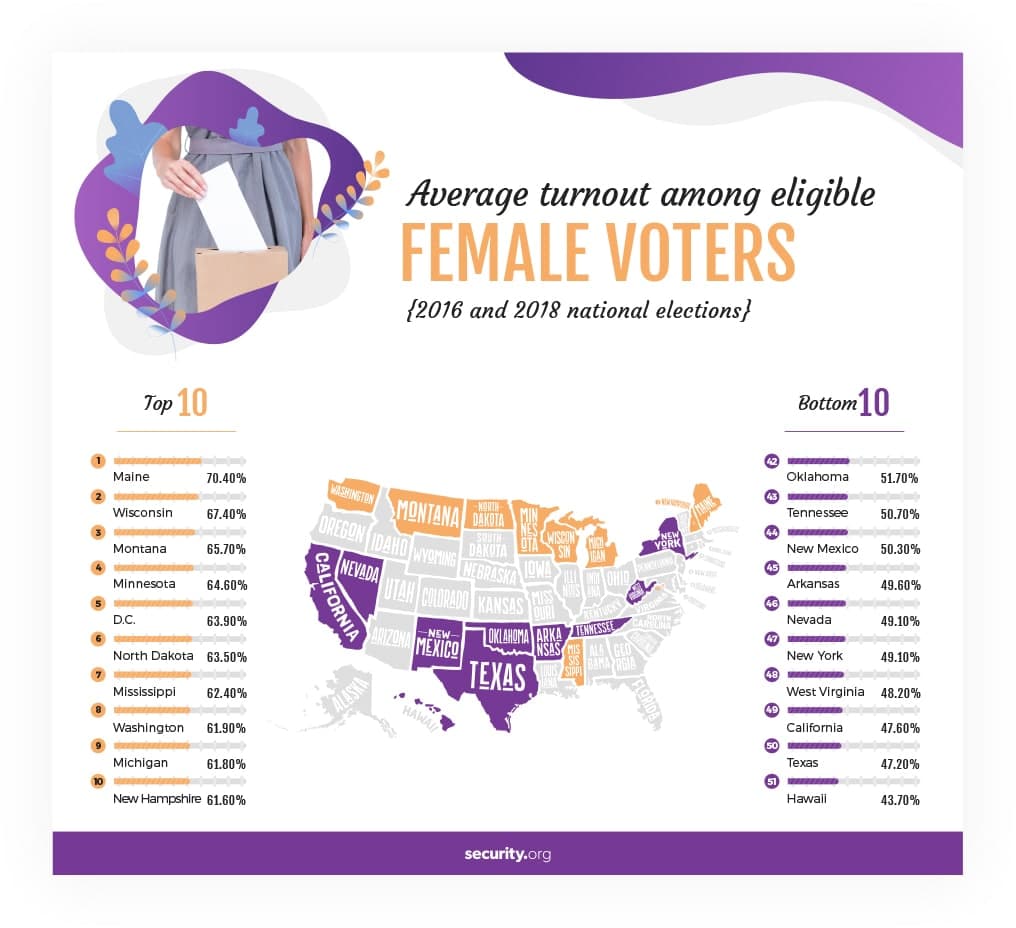 New Hampshire and the District of Columbia both have sent only women to Congress, though both have very small delegations. A dozen states have no women in Congress. 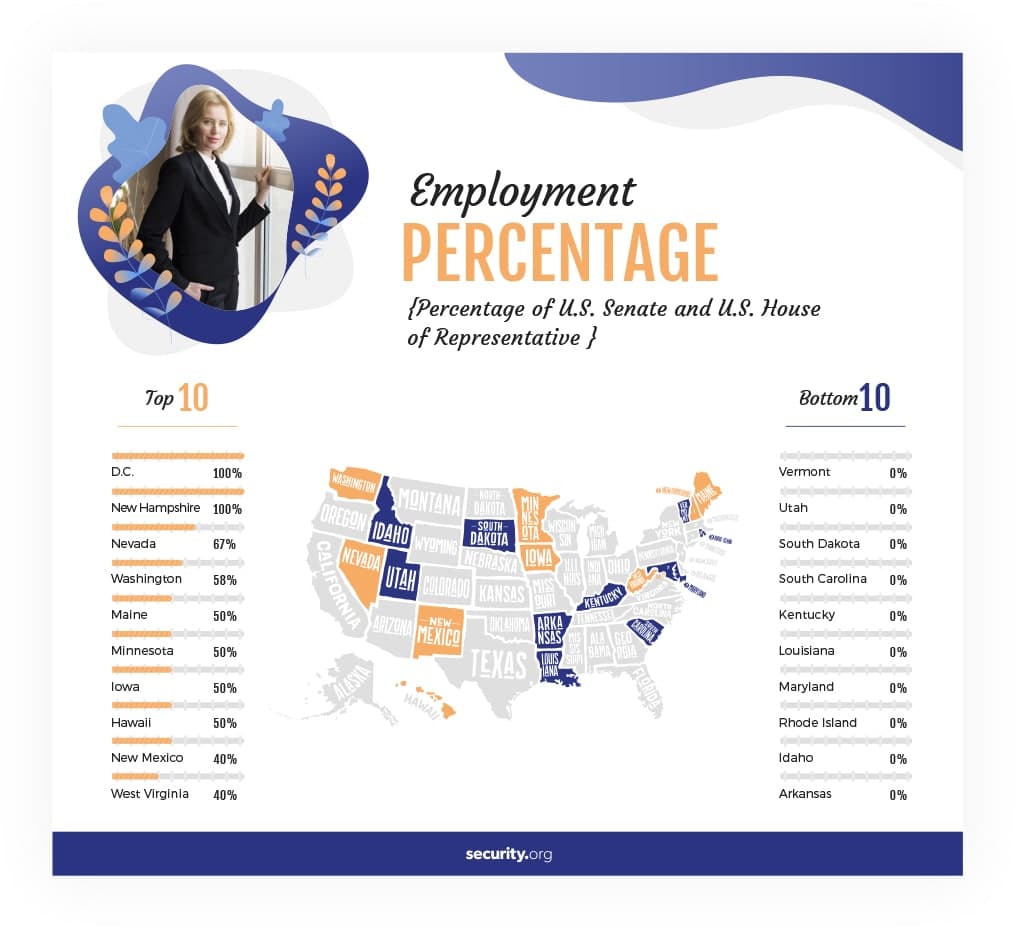 While hundreds of women have been elected to statewide office across the country, 22 states have never had a female governor. 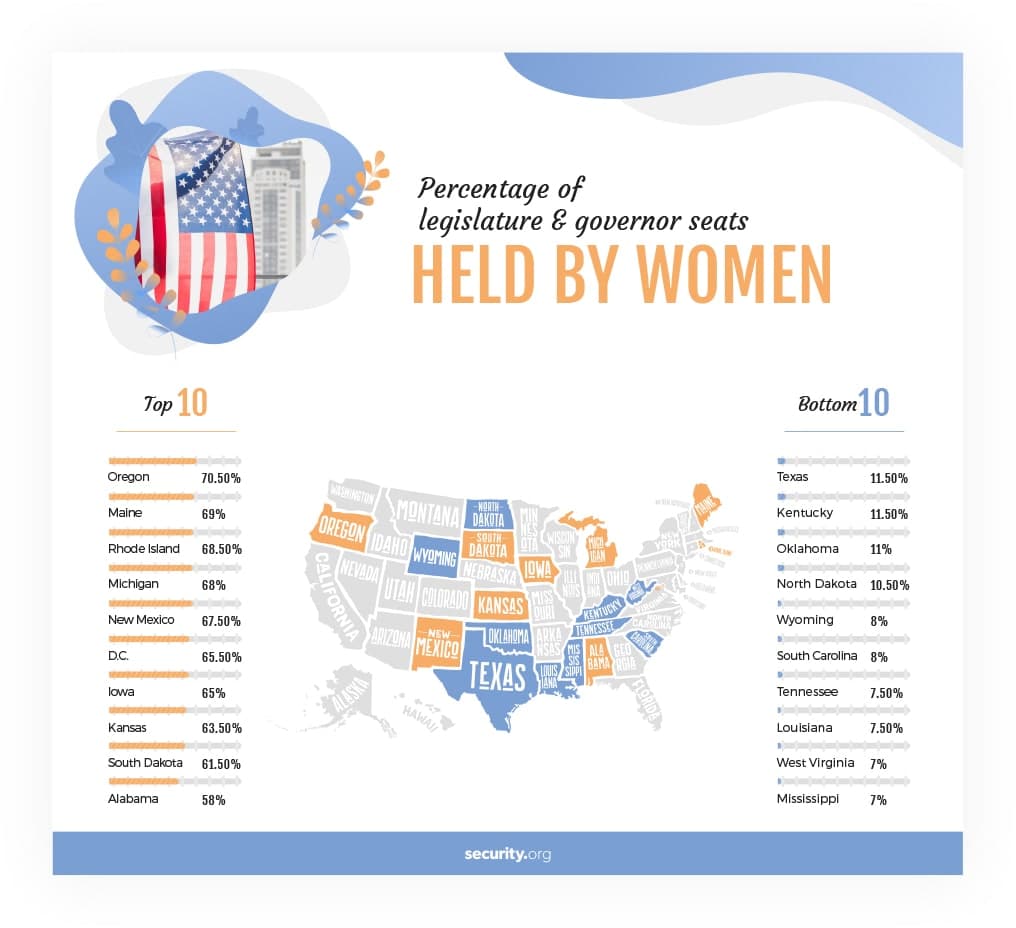 There’s no doubt that today’s American woman, regardless of race, sexual identity or gender expression, is better off than she would have been 100 years ago. But do we really want to compare ourselves to a time when women and people of color couldn’t even vote in most places in this country?

Just because we’ve made progress doesn’t mean the journey is over, as the data we’ve shown you reveals. In most states, the level of freedom the typical woman has is mixed at best.

To create our ranking of best and worst states for women, we compared publicly available data across four key areas: economic freedom, education, health and reproductive freedom, and political participation. Within each of those areas, we used three distinct metrics related to overall freedom, health and happiness.

An average of the 12 metrics was then calculated, though as we discussed, no state really performed particularly well across all metrics. For instance, there are several states that have beat back measures limiting reproductive rights, but many of those same states have much-higher-than-median maternal mortality rates.

Here’s a closer look at each of the metrics, including sourcing.

All data was sourced from the U.S. Census Bureau’s American Fact Finder tool using the most recent Census estimates available with the exception of the percentage of women-owned businesses, which was calculated using the data in this special report.

We included metrics on maternal mortality rates (deaths per 100,000), average female lifespan (from birth) relative to the overall median in each state and restrictions on abortion (limits on gestational age, waiting periods, so-called “partial birth” abortion bans and state-mandated counseling). As we mentioned in the health section, the U.S. maternal mortality rate is shockingly bad, particularly among wealthy nations, so many states have rates that are stunningly high, while others perform surprisingly well considering some of their other ratings in our study. We took the deaths per 100,000 figure and converted it to a percentage and then made each number negative so that it would appropriately detract from each state’s score.

America’s maternal mortality rates have been all over the news recently, but while the national figure is well-known, the state-level numbers are not readily available. The best figures we found were contained in a study in the journal Obstetrics & Gynecology from 2016. Similarly, the average lifespan is well-documented on the national level by the federal Centers for Disease Control and Prevention, but the CDC does not have recently published data on that metric at the state level. So the figures we used came from a study published last year in the Journal of the American Medical Association. We examined several facets of abortion laws across all states and assigned each state a number value based on the areas mentioned above.

The figures, content and images on this page are free to share for noncommercial use. If you want to share any of this content on your site, just include a link back to the URL of this page.