The United States has seen about a generation’s worth of declines in the rate at which violent crimes are committed. Between 1999 and 2019, the overall violent crime rate in the U.S. fell by nearly 28 percent, according to newly published FBI data.

Similarly, the homicide rate has tumbled in that same time frame, falling from 5.7 per 100,000 residents in 1999 to 5 per 100,000 residents in 2019. While murder may be less common on the national level than it was 20 years ago, several states and major cities have homicide rates that eclipse that of the entire U.S. definitively, and some areas have seen murder rates climb in recent years.1

Though it’s by far the least common of all major crimes for which the FBI collects data, murder nonetheless remains a perceived (or real) threat for millions of Americans. In fact, according to a 2020 Gallup poll, about 17 percent of Americans worry about being murdered frequently or occasionally.2

So, how grounded in reality are those concerns? It’s true that murder rates have fallen in recent years, but the answer to that question depends largely on where you live. Digging into the FBI’s most recent data on American crime can help us understand the risks across the country.

Murder in the U.S.: The National Picture

As we already noted, the American murder rate is lower today than it was two decades ago. But the rate is not at its lowest point in history, and recent years have seen major variations. 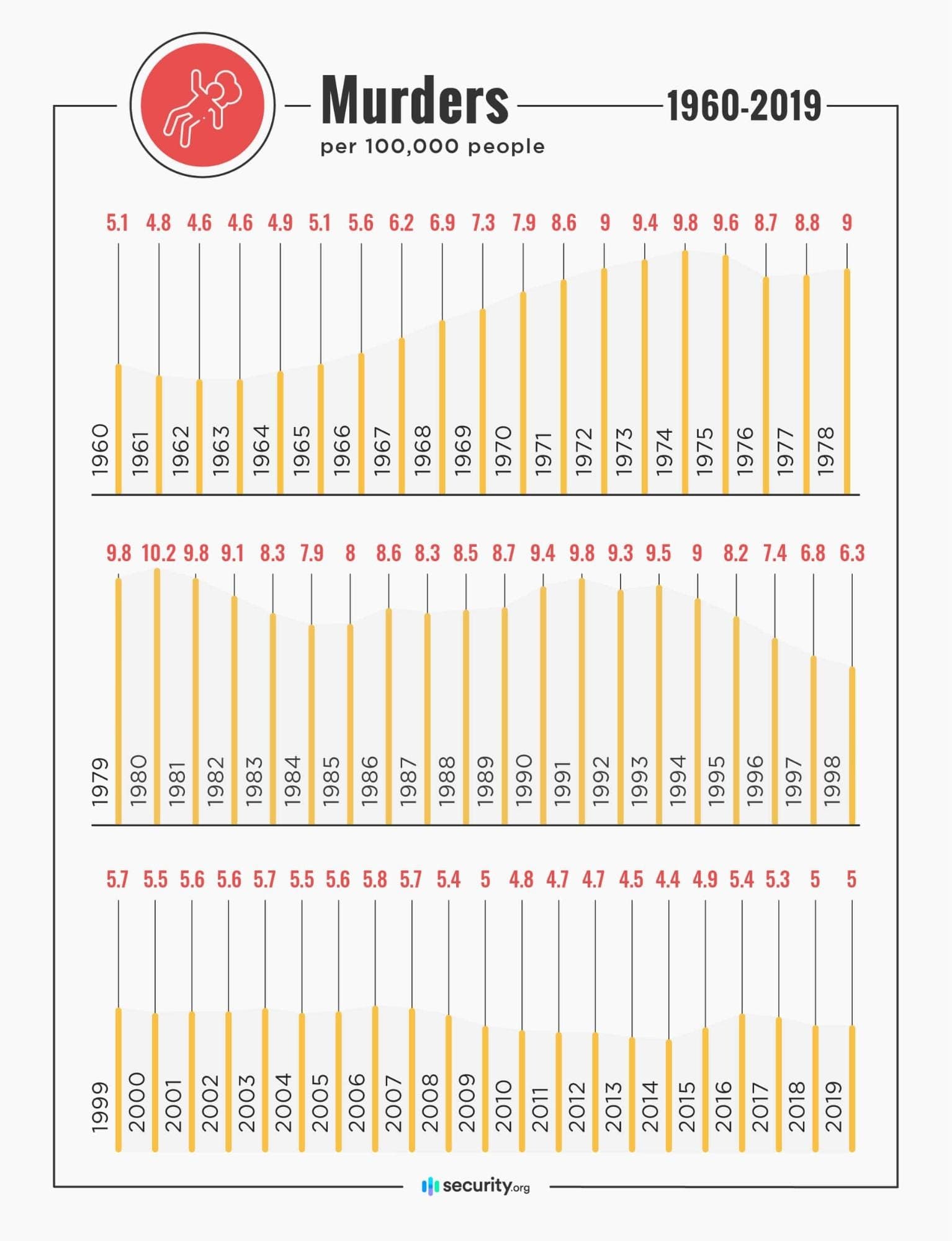 Today’s murder rate stands barely below the rate the nation recorded in 1960, the earliest year for which the FBI collected data. However, this still represents a decline of more than 50 percent from the peak of homicides in 1980. 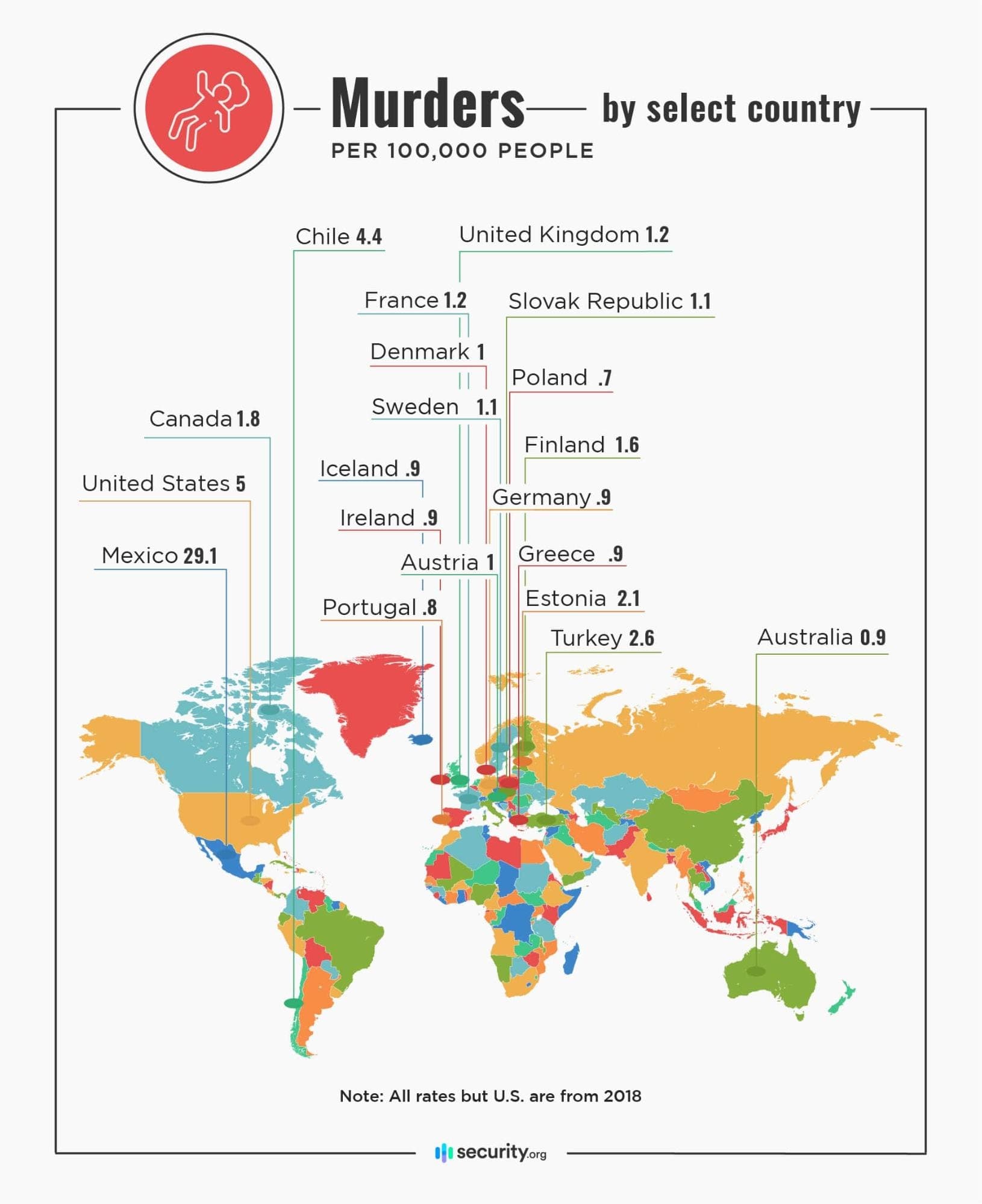 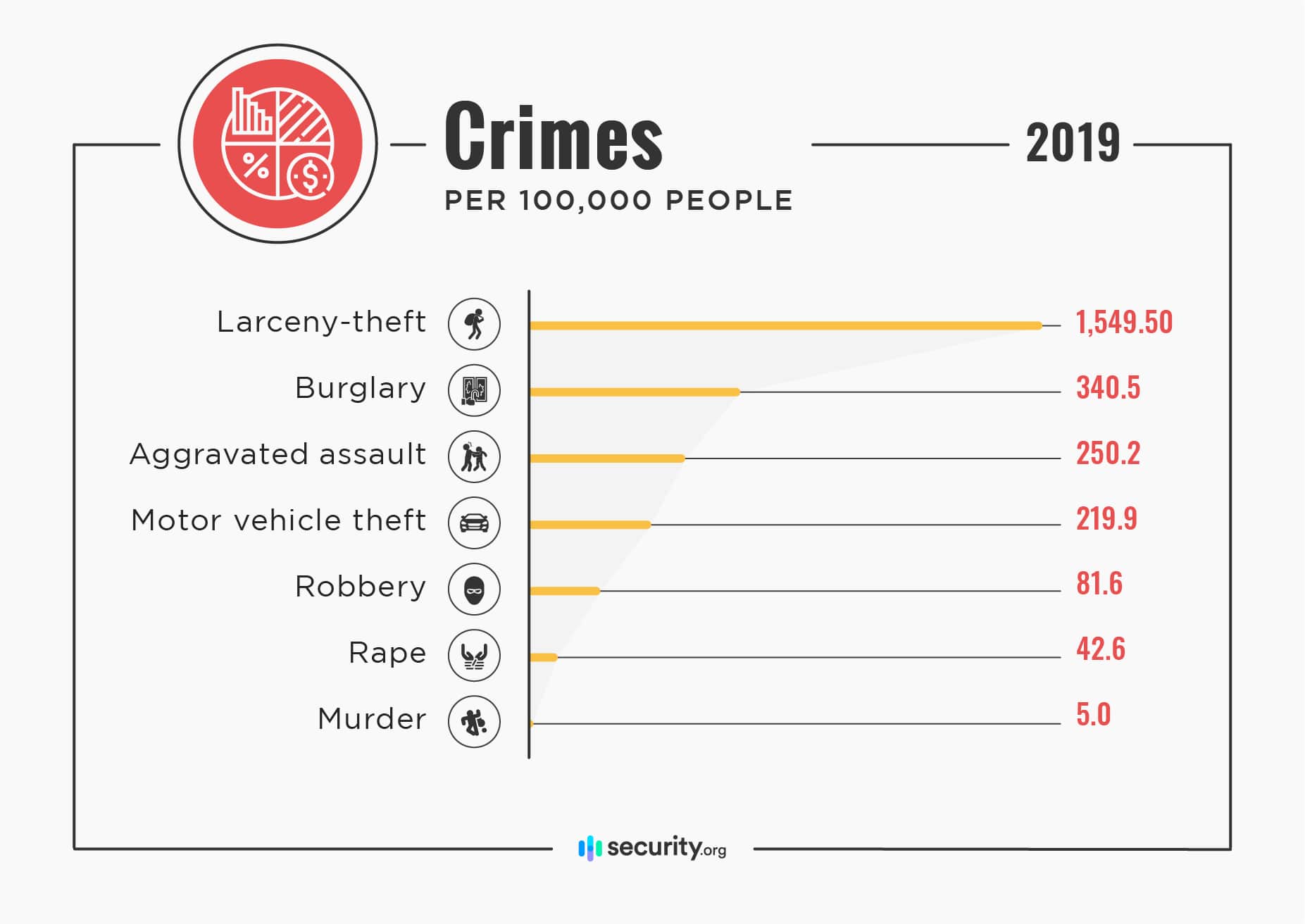 In 2019, nearly 3 in 4 murders in the U.S. involved firearms, by far the most common type of weapon used to commit murder. 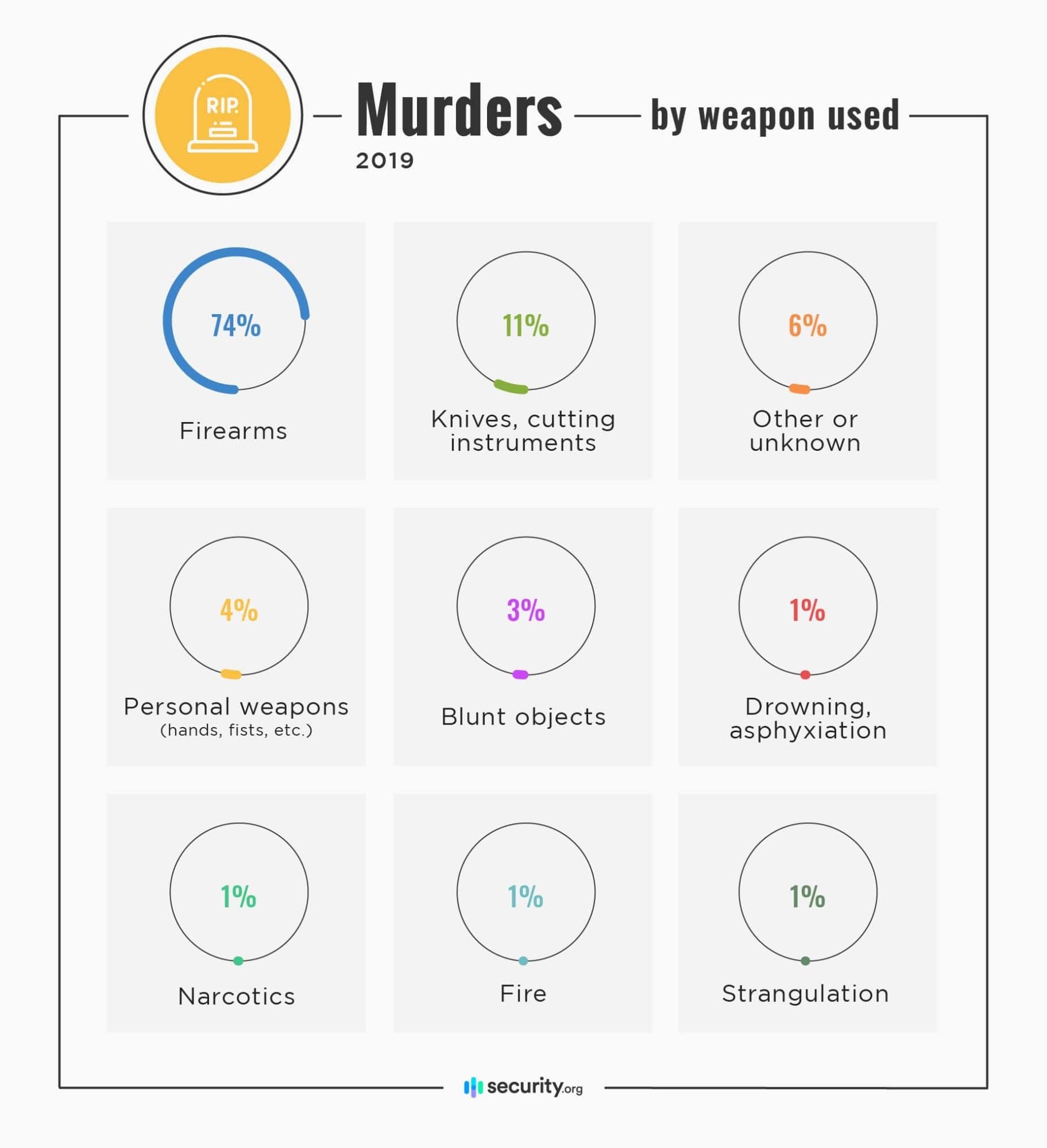 Black Americans and young people are also overrepresented among murder victims. Black people account for about 54 percent of murder victims, though they make up only about 14 percent of the entire U.S. population. 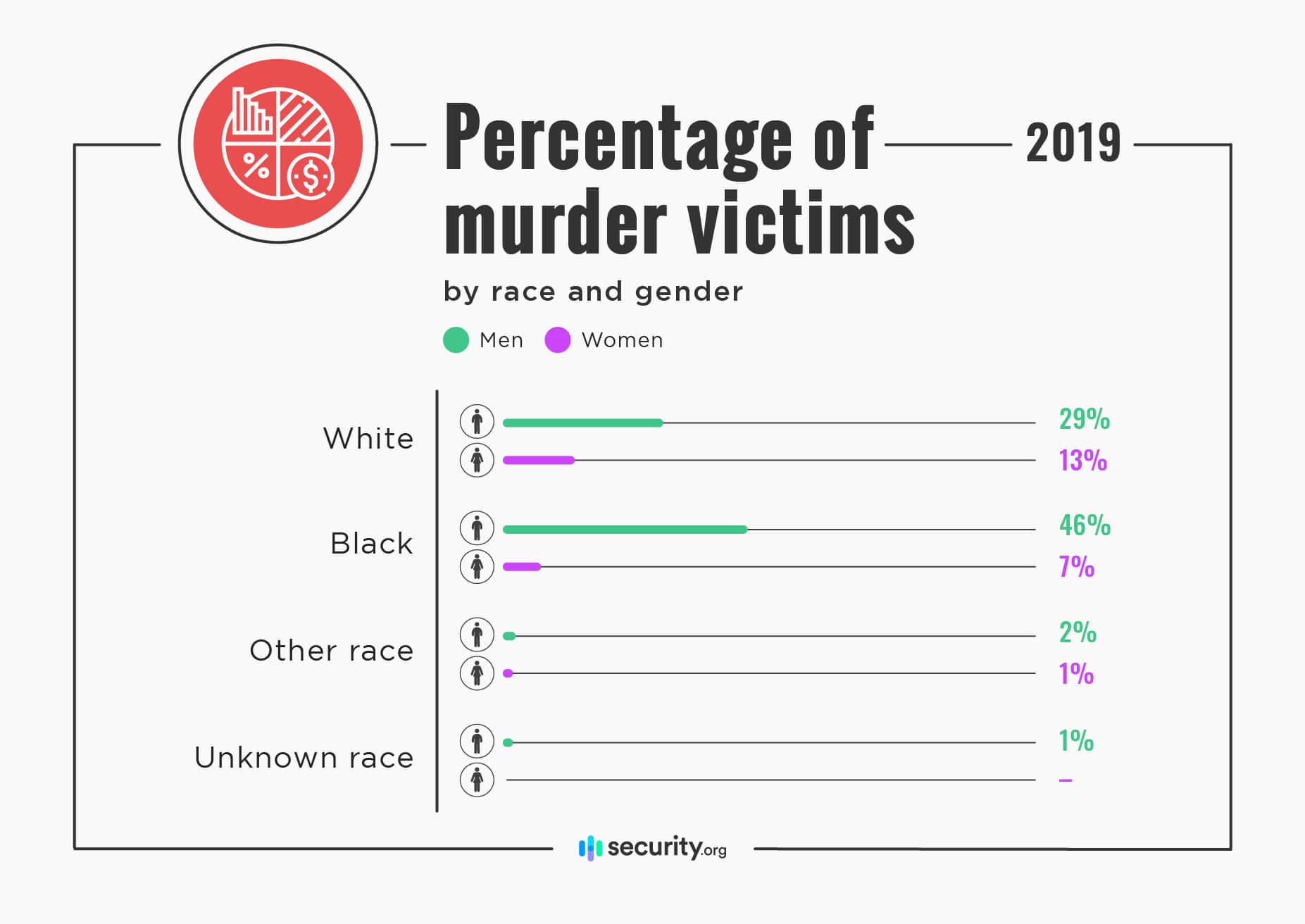 Similarly, more than half of murder victims are between the ages of 20 and 39, but this group makes up only about one-quarter of the entire U.S. population. 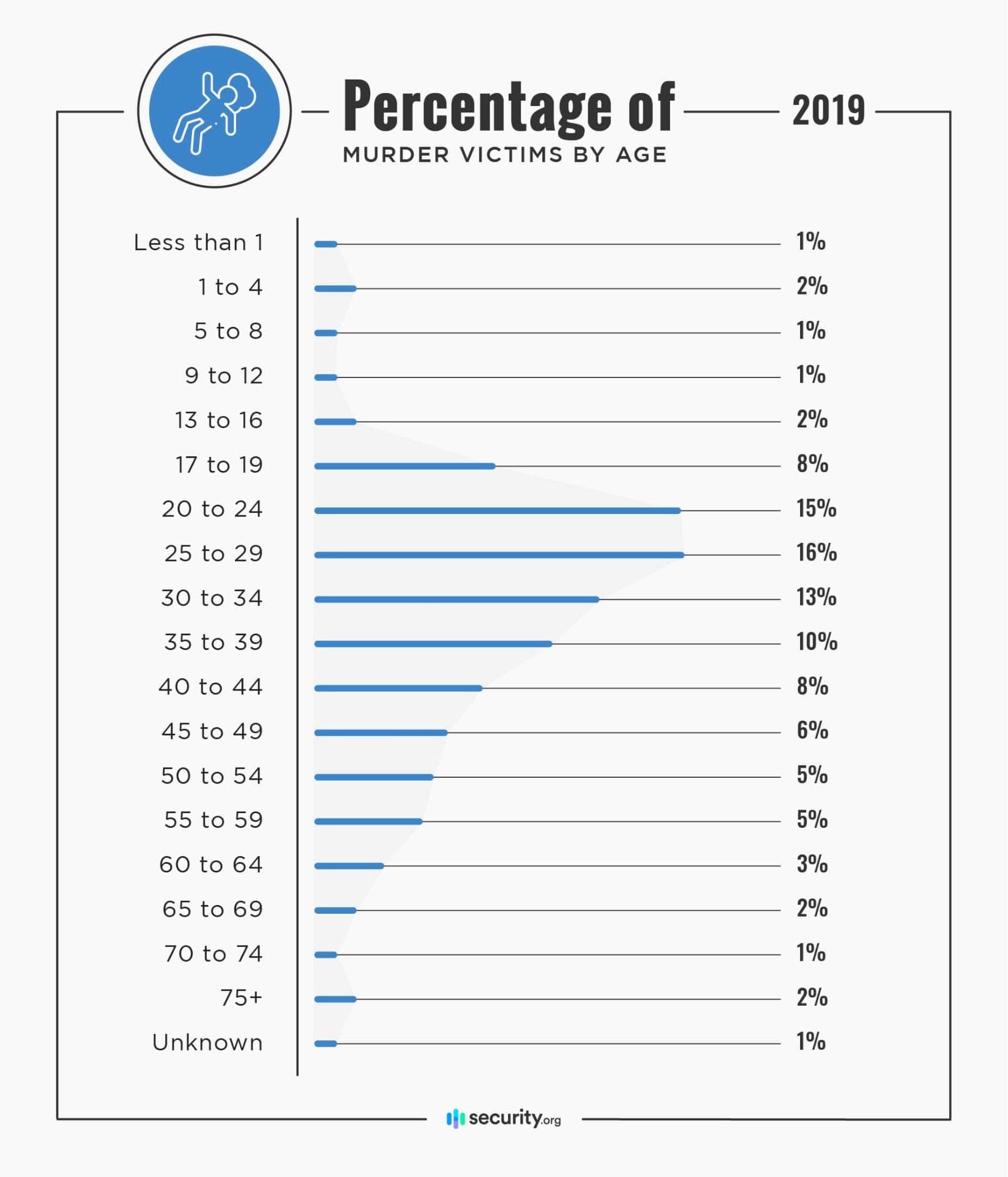 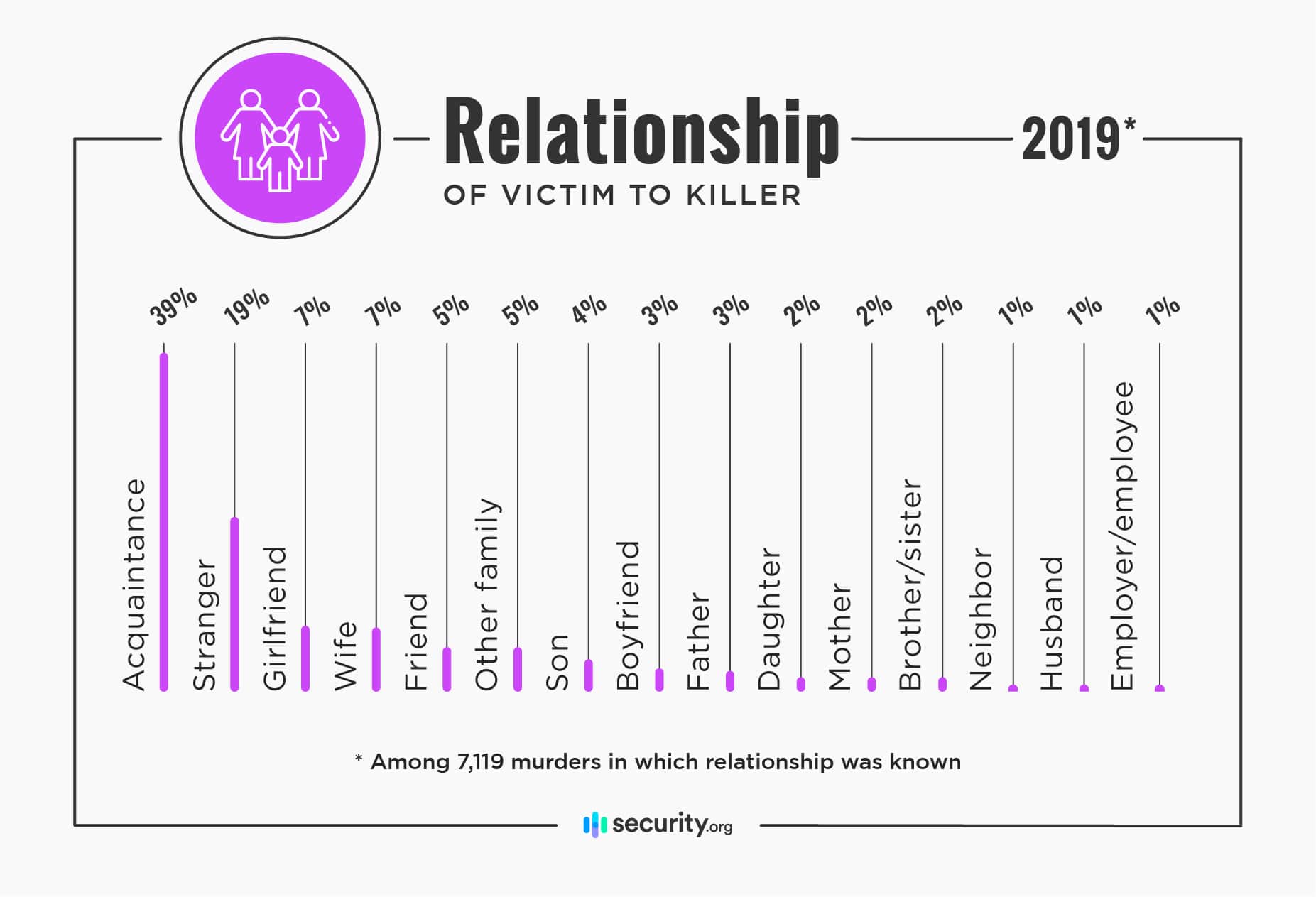 In the majority of states, murder is less common than at the national level, but several states have considerably higher murder rates than the nation’s overall rate — more than double in one case. Note that we have excluded Washington, D.C., from the state-level analysis because, for statistics like crime data, the district is more comparable to a city. The district proper had a murder rate of about 23 per 100,000 in 2019, but the broader metro area had a far lower rate.

Louisiana had the highest population-adjusted murder rate among the 50 states in 2019, followed closely by Mississippi. Alaska, Missouri, and Maryland and South Carolina (tied) round out the top five. On the other end of the spectrum, the murder rate in Maine is the nation’s lowest, with Vermont, South Dakota, Iowa, and Idaho making up the rest of the bottom five. 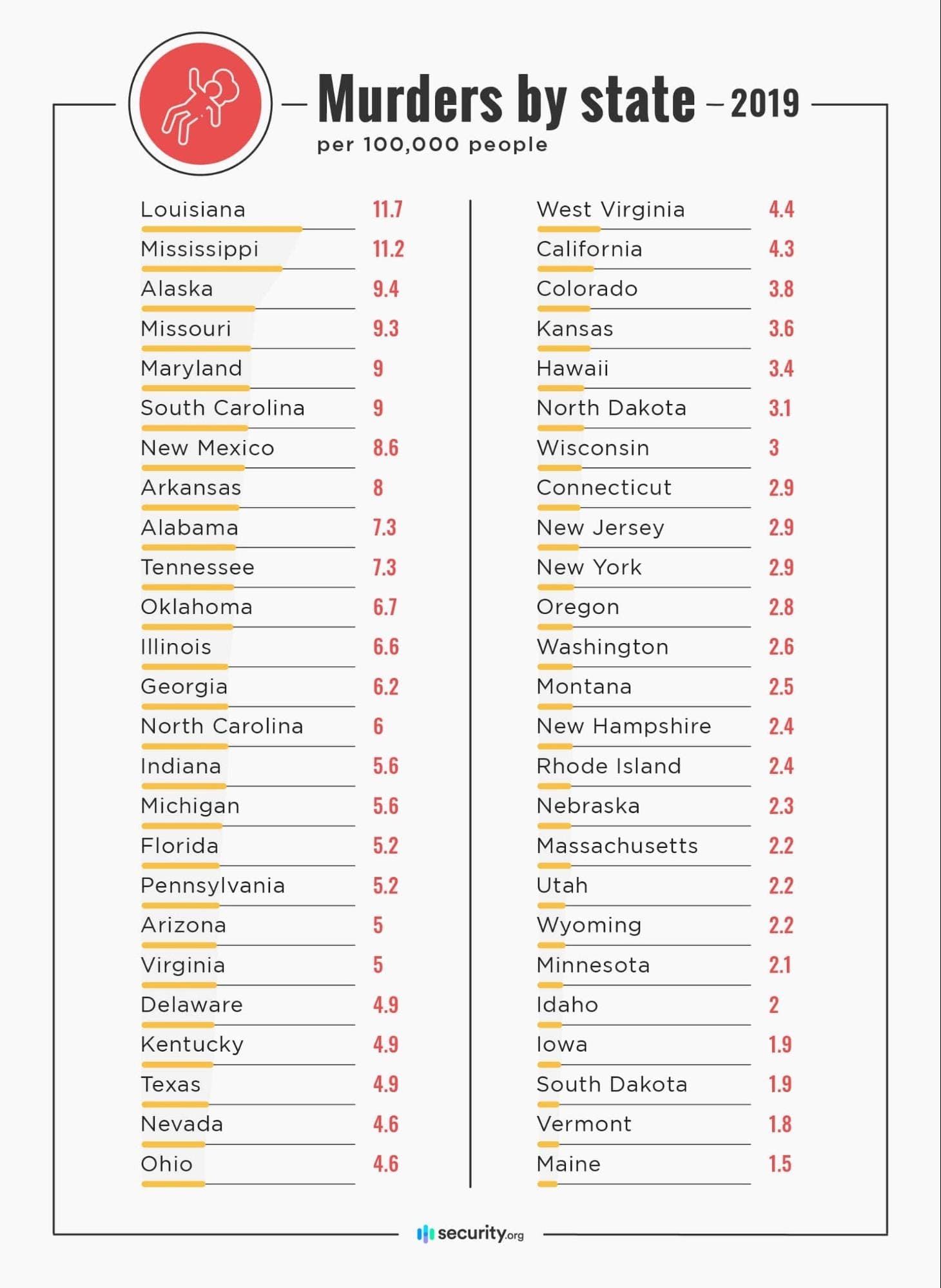 The South has the highest average murder rate among the four major regions of the country, while the Northeast has the lowest.

The reasons why murder rates tend to be higher in the South are the subject of research and advocates’ efforts to reduce violence. There is no single contributing factor in high murder rates, but most researchers agree that poverty, population density, age, and many other issues influence murder rates.5

Notably, the two states with the highest murder rates also have the highest rates of residents who live below the poverty line, according to Census data. Nearly 20 percent of Mississippi’s population is in poverty, while the rate is 19 percent in Louisiana; the national poverty rate is about 12 percent. However, low poverty rates don’t necessarily mean a state will have a low murder rate. In fact, Alaska, which ranks third for murder rate, has a below-average poverty rate.6 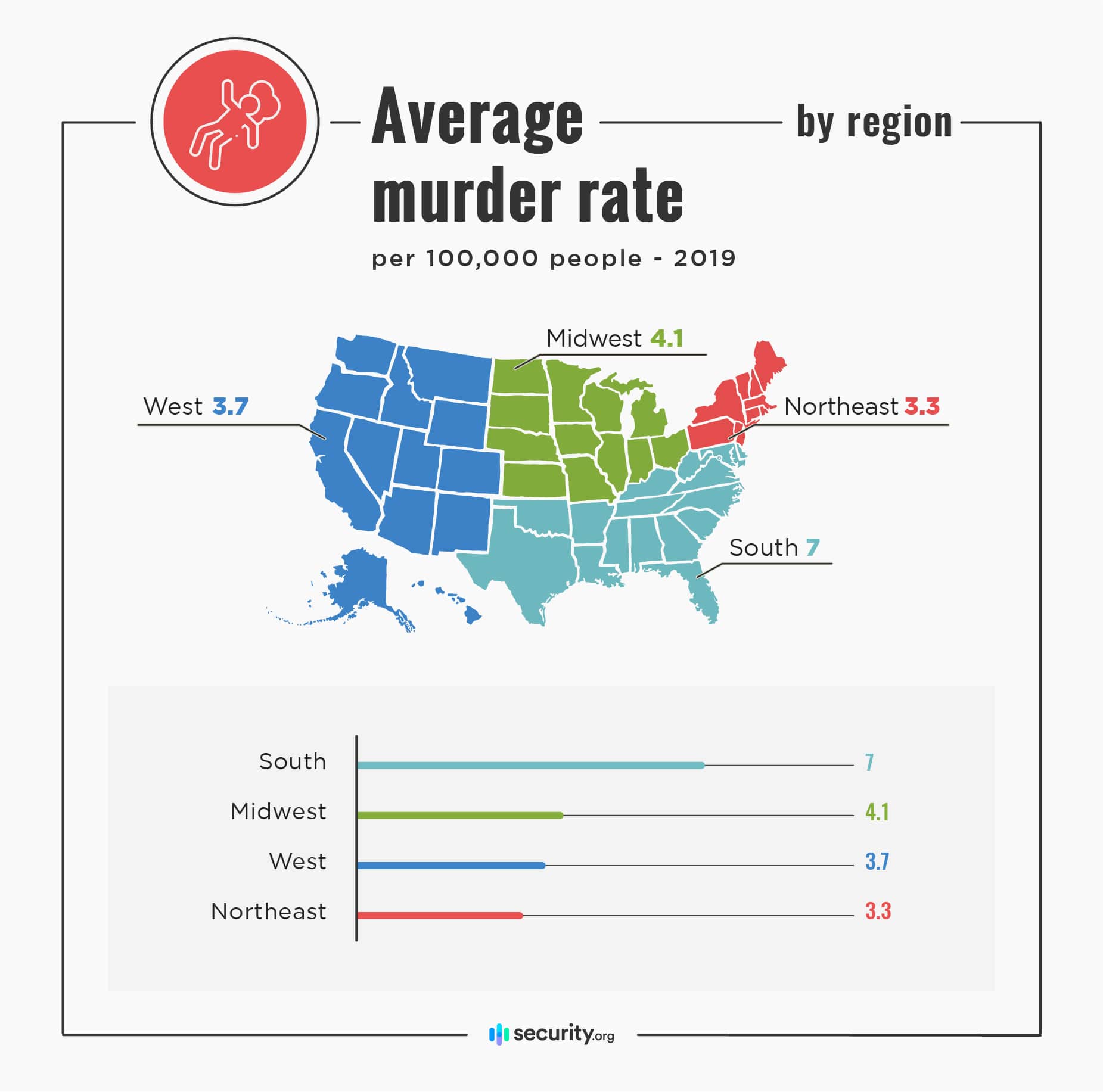 Only 15 states have seen their murder rates fall over the past 10 years, with an average decline of about 20 percent during that time. The majority of states have seen murder become more common over the past decade, while the homicide rate in three states (North Dakota, Alaska, and New Hampshire) has more than doubled.

Again, the causes of crime and particularly violent crimes like homicide are multifaceted, so there is no consensus as to why most states have seen their murder rate climb over the past decade. But preliminary data from 2020 indicates that murder rates will continue their climb, possibly driven by some combination of the racial justice movement, the COVID-19 pandemic, and firearm access.7

The Intercept’s analysis found that, in some cases, changes in policing tactics could have driven murder rates up, while in other cases, advocates have blamed a breach of trust between the public and the police.

“Because of broken trust with community members, some members are less likely to rely on police, provide information, and serve as witnesses, among other things,” Thomas Abt, director of the National Commission on COVID-19 and Criminal Justice, told The Intercept. “Ultimately that means fewer violent disputes being solved through the formal criminal justice system, and more of them dealt with informally through retaliation, causing homicides and other violent crimes to increase.” 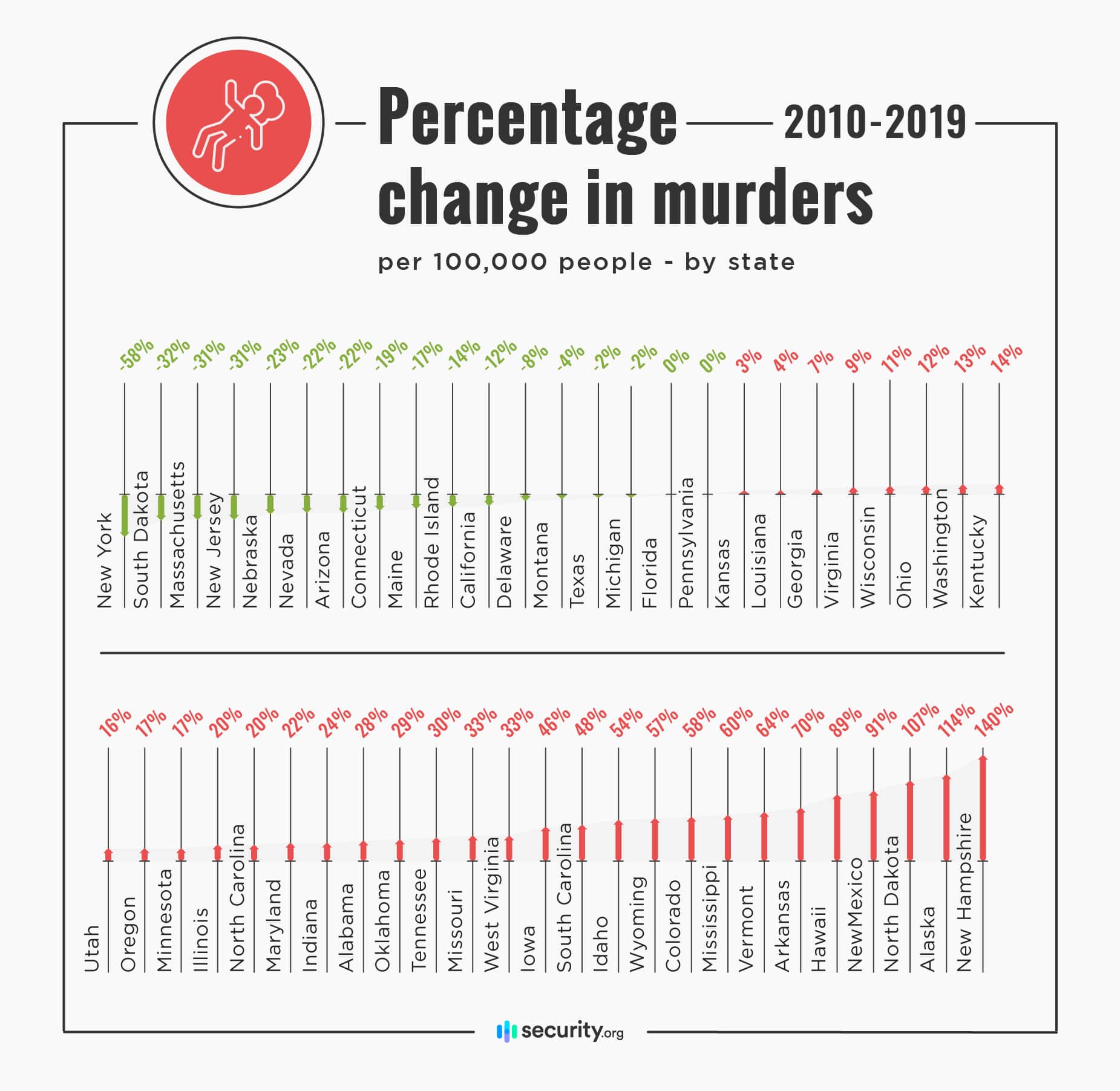 That’s largely because the murder rate across the U.S. was incredibly high between the late 1960s and mid-1990s, as were rates of other crimes. The phenomenon has been referred to as “the great crime tsunami,” and the reasons for it remain the subject of research and intense debate.8

In addition to major variations in how common murder is in each state, different areas of the country vary in the types of weapons most often used in murders. Again, about 74 percent of murders nationally involved the use of firearms; such weapons range from about 28 percent of murders in Hawaii to 86 percent in Missouri and South Carolina.

At the same time, about 11 percent of murders involved knives in the U.S. in 2019, but they accounted for 28 percent of Rhode Island’s murders. One potential reason why Rhode Island has a relatively low rate of murders involving guns is the state’s gun control laws, which have high marks from organizations like the Giffords Law Center.9 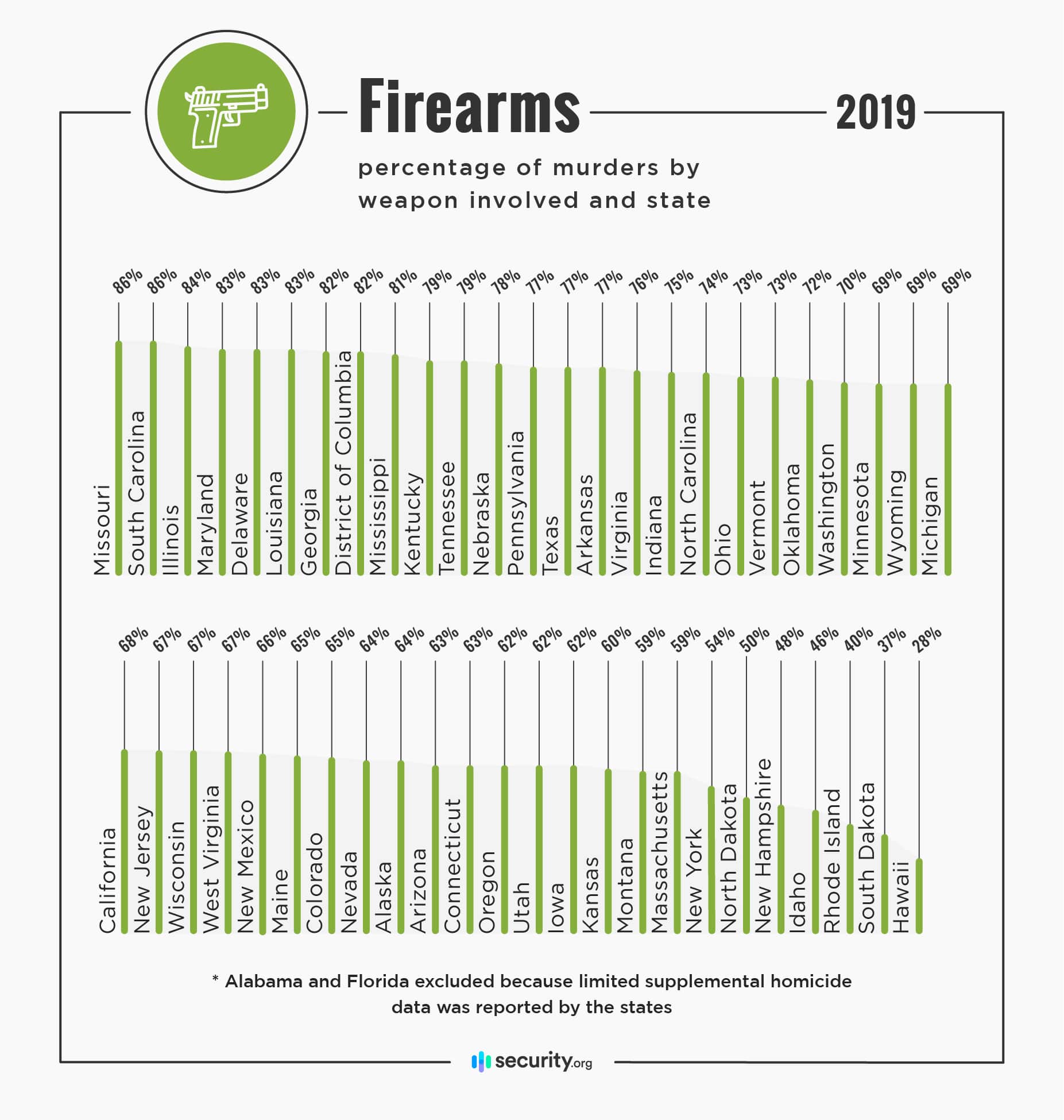 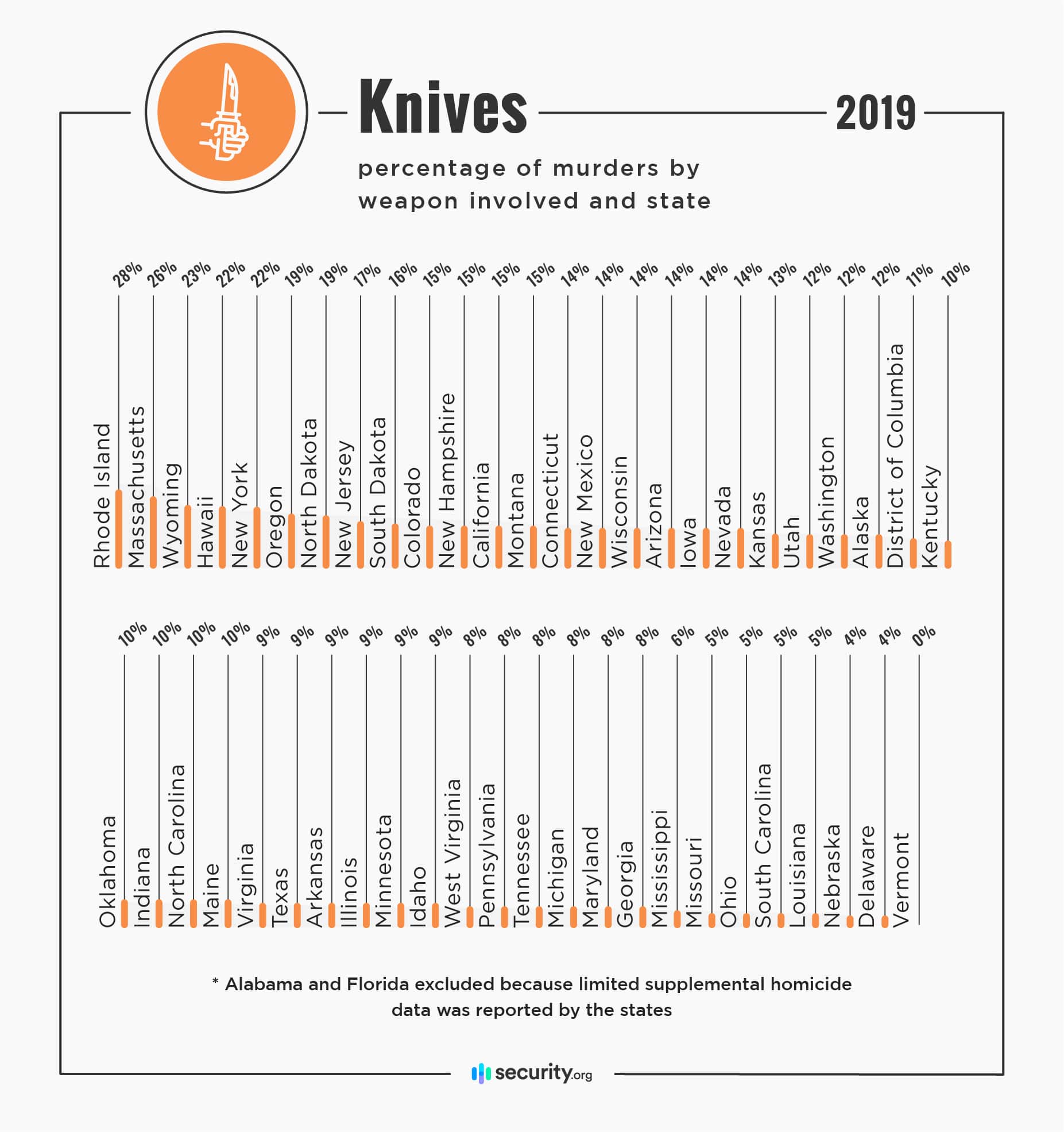 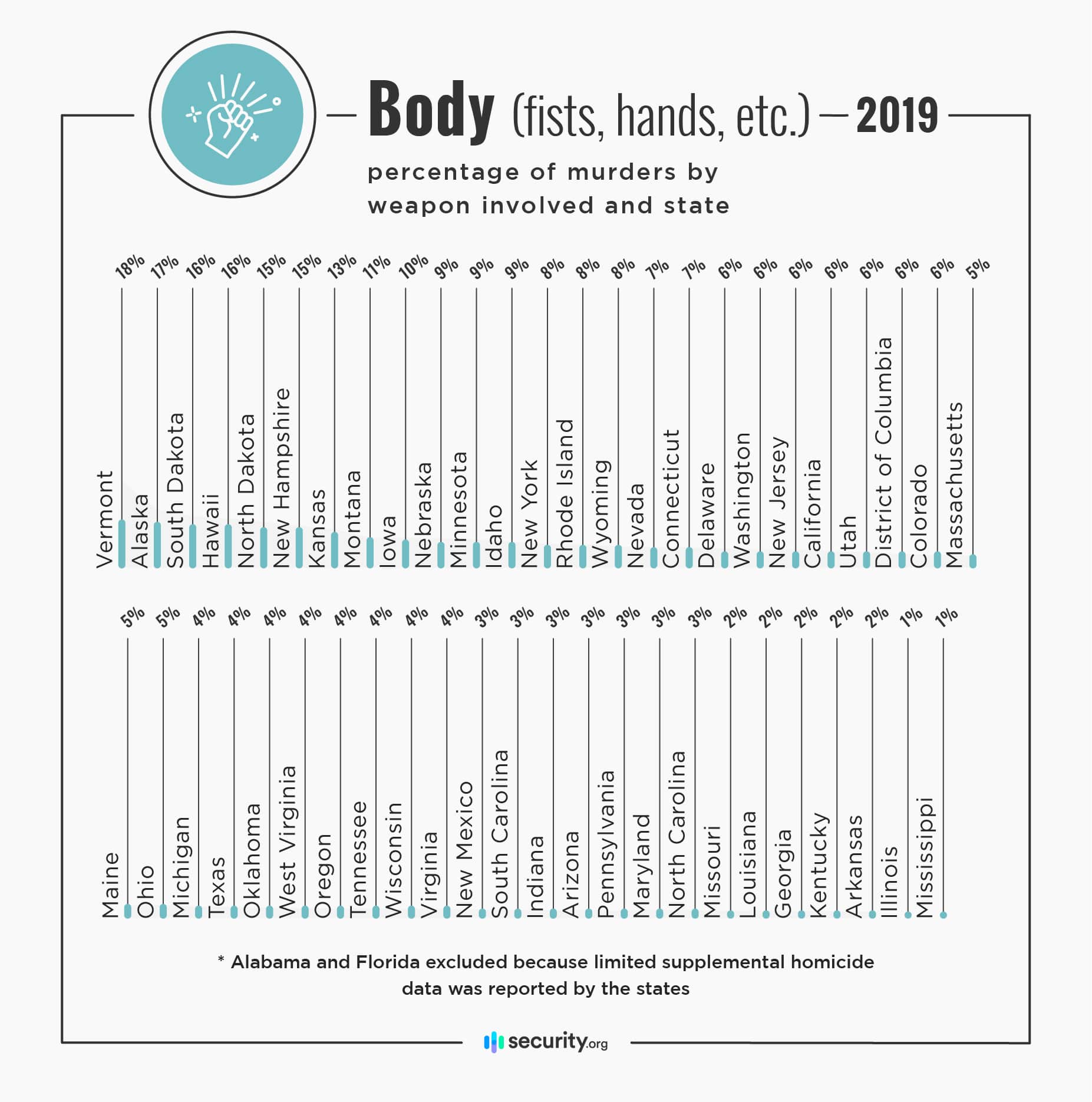 Murder in the Cities

Murder is more common in cities with populations between 250,000 and 1 million. That being said, murder rates vary dramatically depending on the city and the metro area in question. 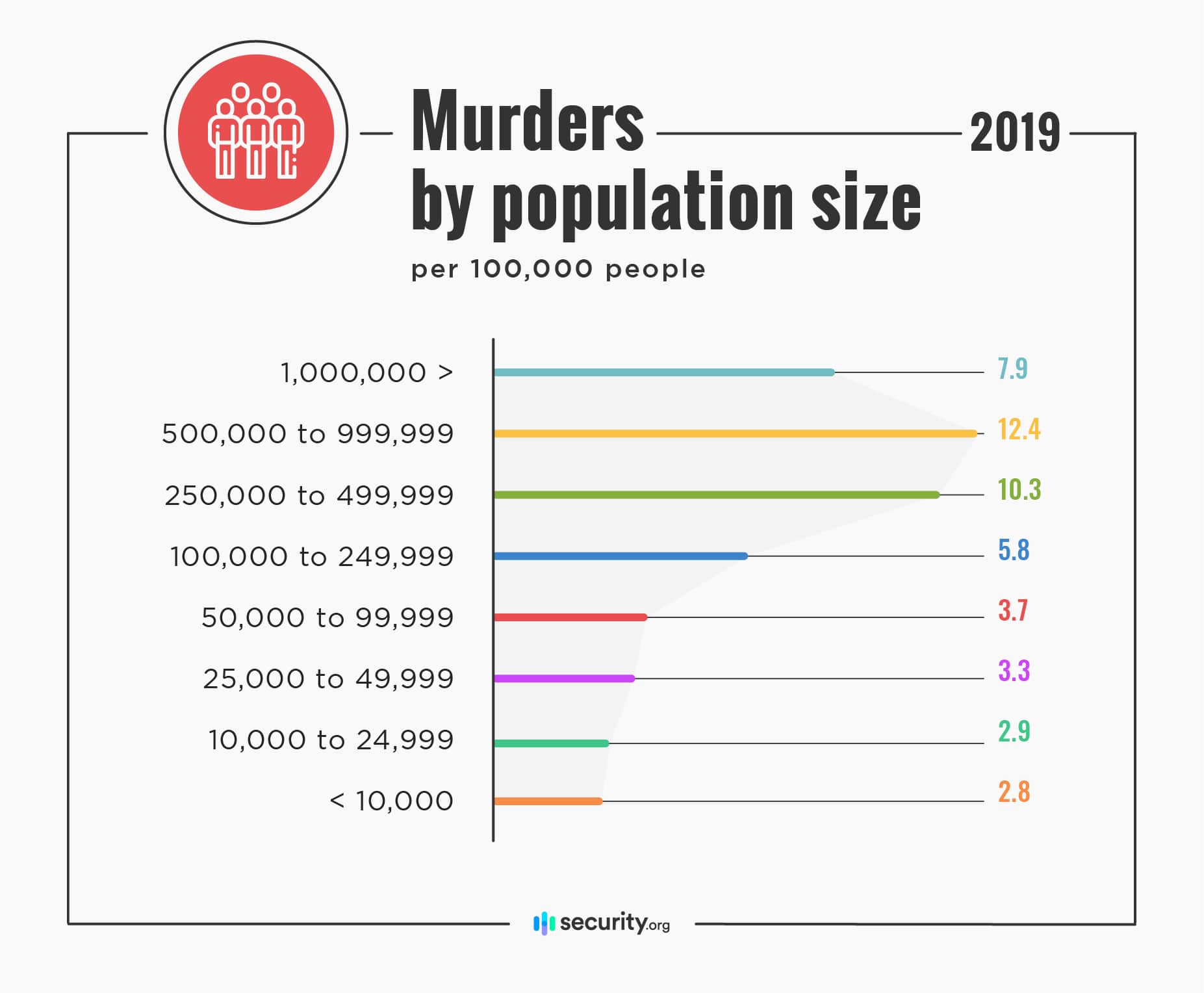 Among the 300-plus largest cities and metro areas for which the FBI published 2019 data, the murder rate in Pine Bluff, Arkansas, was the highest. The rate of 31.8 per 100,000 is more than quintuple the overall U.S. rate and almost four times the rate of Arkansas as a whole. Moreover, Pine Bluff’s population-adjusted murder rate is almost double the rate of the next city on the list (Memphis, Tennessee). Additionally, 2019 was Pine Bluff’s second consecutive year leading metro areas in the murder rate.

For their part, city leaders in Pine Bluff are taking steps to stem the tide of violence in their community.

“The spike in homicides is a major concern,” Mayor Shirley Washington told the Arkansas Democrat-Gazette in 2019. “As we move our city forward, we are working with our police department to provide better training and technical assistance to officers. We are also partnering with our county sheriff and prosecuting attorney, as well as exploring the U.S. Department of Justice National Public Safety Partnership.”10

A majority of cities have seen murder rates climb over the past decade, and for many, rates have gone up quite dramatically. Among the more than 100 cities with statistically significant murder rates for 2019 (0.5 per 100,000 or higher) that also had published rates for 2010, the murder rate in the Owensboro, Kentucky, metro area climbed the highest, with an increase of more than 270 percent.

Law enforcement officials in Owensboro have indicated that drug-related violence is contributing to the increase in violence in their city. They have sought federal funding as part of a program aimed at fighting drug trafficking and related violence. Owensboro Mayor Tom Watson blames the crisis on methamphetamines.11

“Now we have opioids here too, but the fact that we have this amount of meth, a lot of it coming across the border into our community, makes it a little different because most of eastern Kentucky has opioid problems,” Watson told the Owensboro Times in 2020.12 “But meth is everywhere here. It’s not just in one portion of our community. It’s all over the place.” 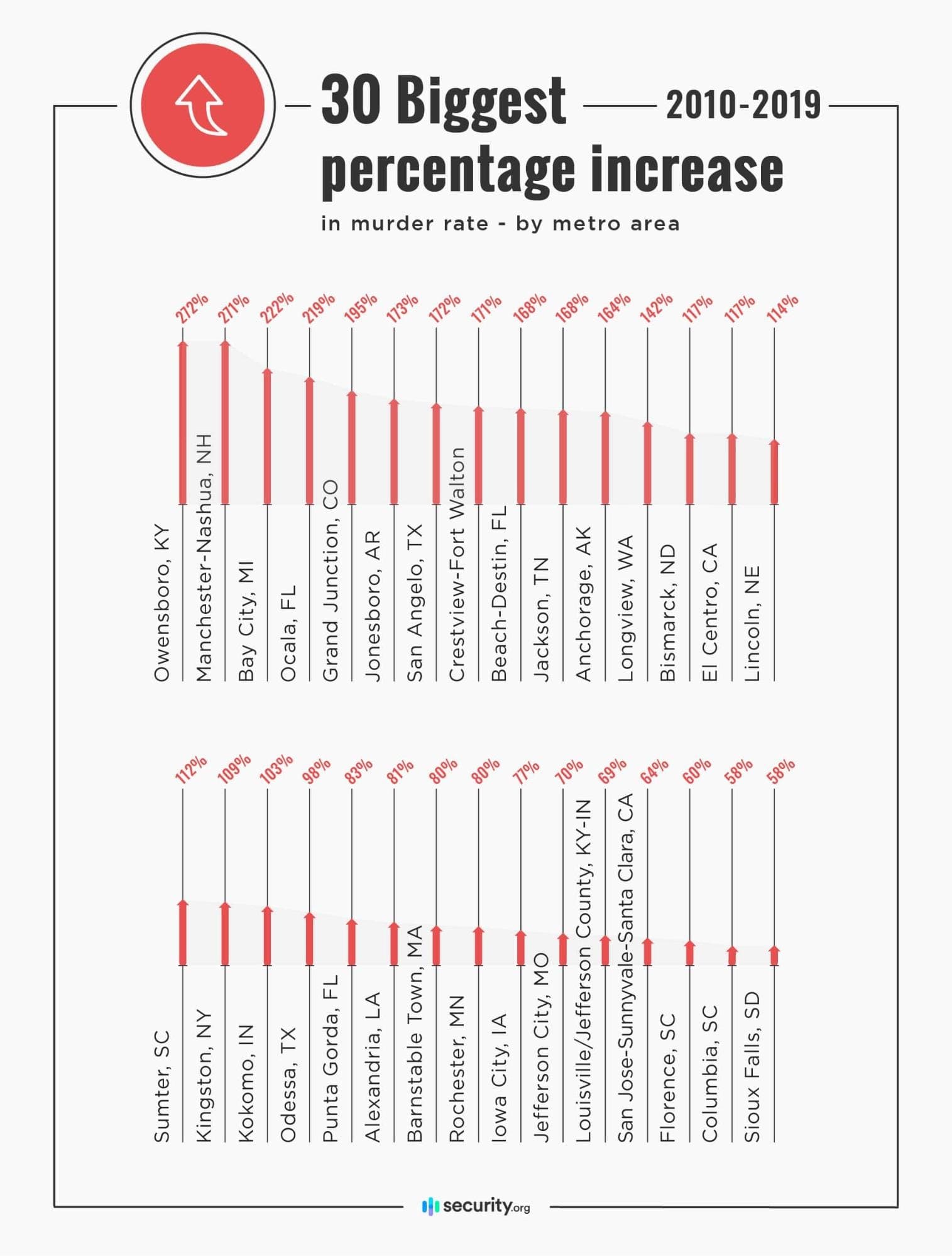 Some cities have made major strides in combating murder rates, and for the cities whose rates dropped, the average decline was more than 30 percent. Lebanon, Pennsylvania, saw the biggest decline in the murder rate at 82 percent, followed by Coeur d’Alene, Idaho, at 79 percent. Coeur d’Alene also has one of the five lowest murder rates among cities with available data. 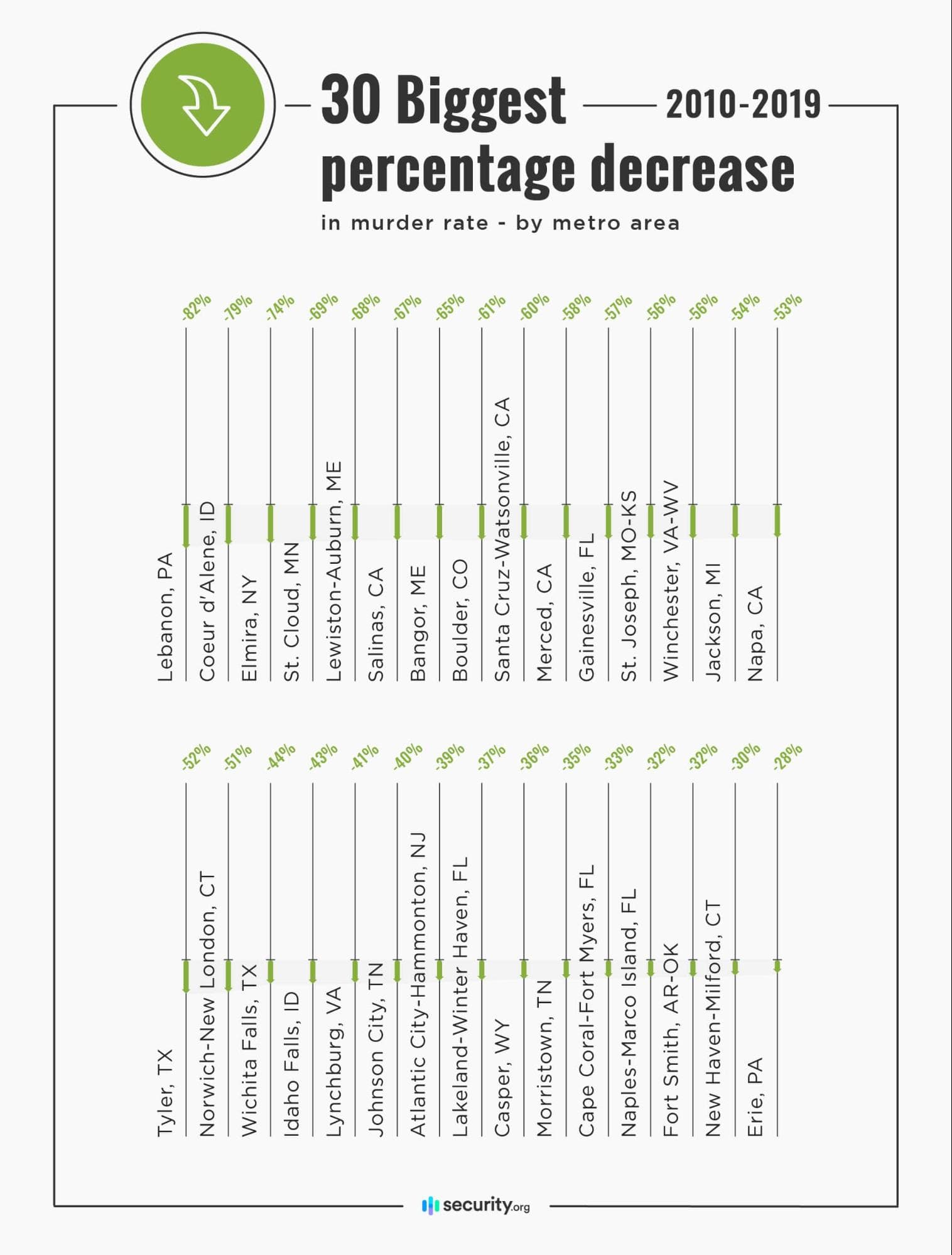 The average American is much more likely to be the victim of package theft or even robbery than of a homicide, and the current U.S. murder rate isn’t too far off from the lowest rate on record (4.4 per 100,000 in 2014).

However, for all Americans, there’s about a 1-in-18,989 chance of being murdered. For comparison, an American has a 1-in-517 chance of dying from heart disease. Still, as we can clearly see, the likelihood of becoming a murder statistic depends to a major degree on where you live.13

Our analysis and data from the FBI both use the term “murder” to refer to all cases of intentional homicide, which includes murder and non-negligent manslaughter. All of the data relating to rates of murder and other crimes in the U.S. came from the annual FBI publication “Crime in the U.S.” Our analysis covered data from 2019 and 2010 as well as historic data the FBI had reported previously.14 15

Though it’s just one of a limitless number of factors to consider, understanding how common murder is in your community is a big part of feeling safe where you live. If you wish to share any of the data, analysis, or images on this page, feel free to do so for any noncommercial uses. Folks who do share are encouraged to include a link to the URL of this page.