GUN COUNTRY: Where in the U.S. Are Guns Most Popular?

Despite the fact that most Americans don’t personally own guns, access to firearms remains such a politically divisive issue that no new, major federal gun control legislation has been enacted for the past 25 years. Meanwhile, thousands of people have died in mass shootings, and thousands more have been killed by small-scale violence and suicides by guns.

American civilians own an estimated 393 million firearms, both legal and illegal; that’s more than all of the firearms combined from 24 countries reporting the highest rates of civilian gun ownership, according to the Small Arms Survey. However, only 1 in 3 Americans report owning a gun, while 44 percent live in homes where a gun is present. That means most gun owners have more than one gun.

Having a deeper understanding of the nexus between gun sales, gun crimes, and gun deaths is important to bridging the political divide and enacting gun violence legislation. We wanted to look at where in the United States gun sales, crimes, and deaths were most common, and see what connections and correlations we can draw between those states.

The question of how many guns are sold in the United States every year isn’t a straightforward one. A patchwork of state and federal laws makes it so that some, but not all guns, are purchased through licensed retailers who are obligated to run background checks on customers. Even when dealers are required to conduct background checks, they don’t have to report whether customers ended up purchasing a gun, what kind of gun they purchased, or how many guns they purchased. Also, some legal gun purchases are made through sources other than licensed retailers, such as online or through friends.

Researchers of gun ownership have created a formula for estimating gun purchases in a given year using the FBI’s background check data. For the purposes of this study, we’ve used that formula, and you can read the full details in our methodology section at the bottom of this page.

According to our analysis of federal background check data, about 22 million guns were purchased through licensed dealers in 2020. That represents a 64 percent increase from 2019, when an estimated 13.4 million were purchased, and it’s the highest number of guns purchased through licensed dealers over the past two decades. If sales remain steady, 2021 will be an even bigger year for gun purchases. 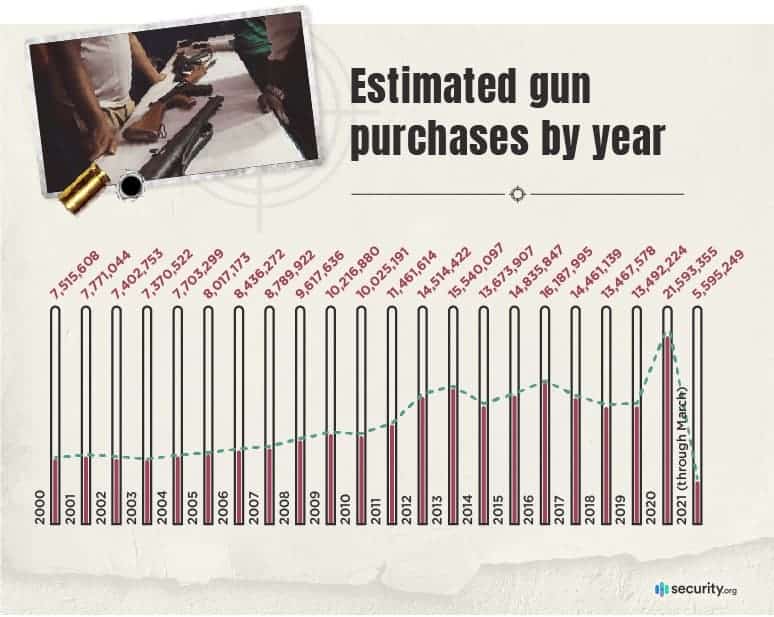 Four states – Texas, Florida, California, and Pennsylvania – had at least a million estimated gun sales in 2020. Hawaii’s number is the lowest, but this is due to differences in how the state reports gun sales to the National Instant Criminal Background Check System (NICS). The District of Columbia has some of the nation’s strictest gun laws, which is reflected in its low estimated number of purchases through federally licensed dealers. Many of the other low-purchase states are low in population as well. 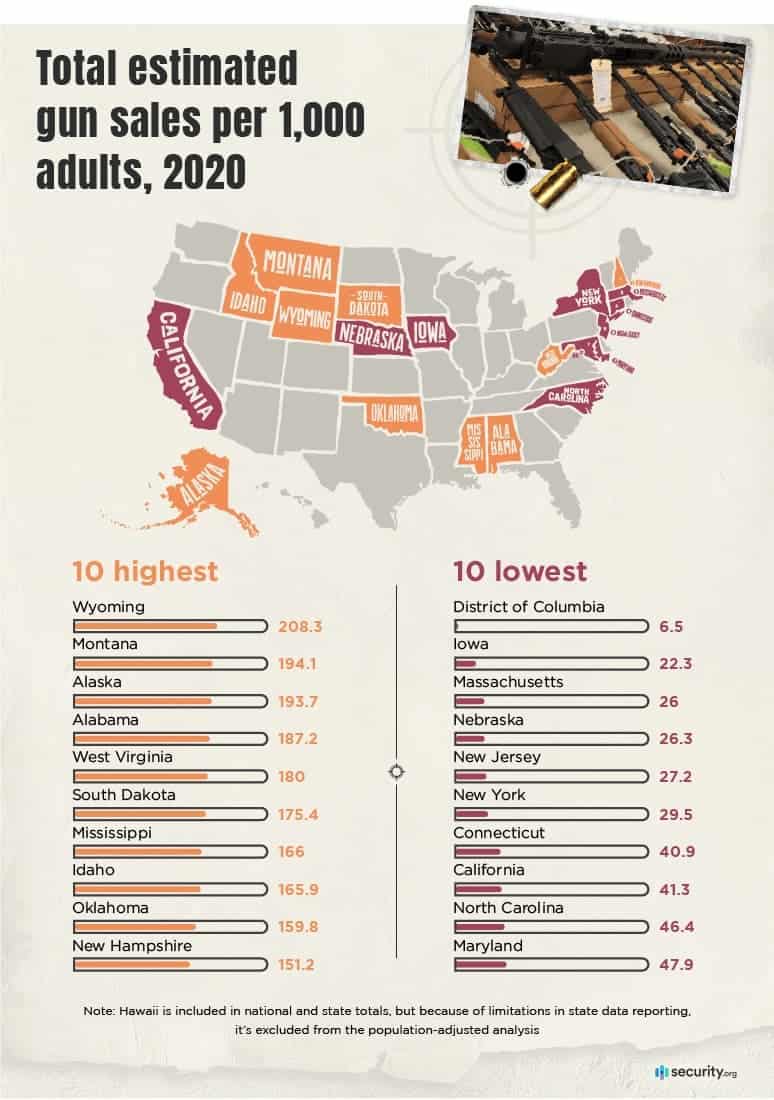 That being said, raw numbers tell only one part of the story, and adjusting for population differences is the best way to see how popular gun sales are in a particular state. Comparing gun sales to the number of adults in a state shows us which ones have the highest population-adjusted rates of estimated gun purchases. 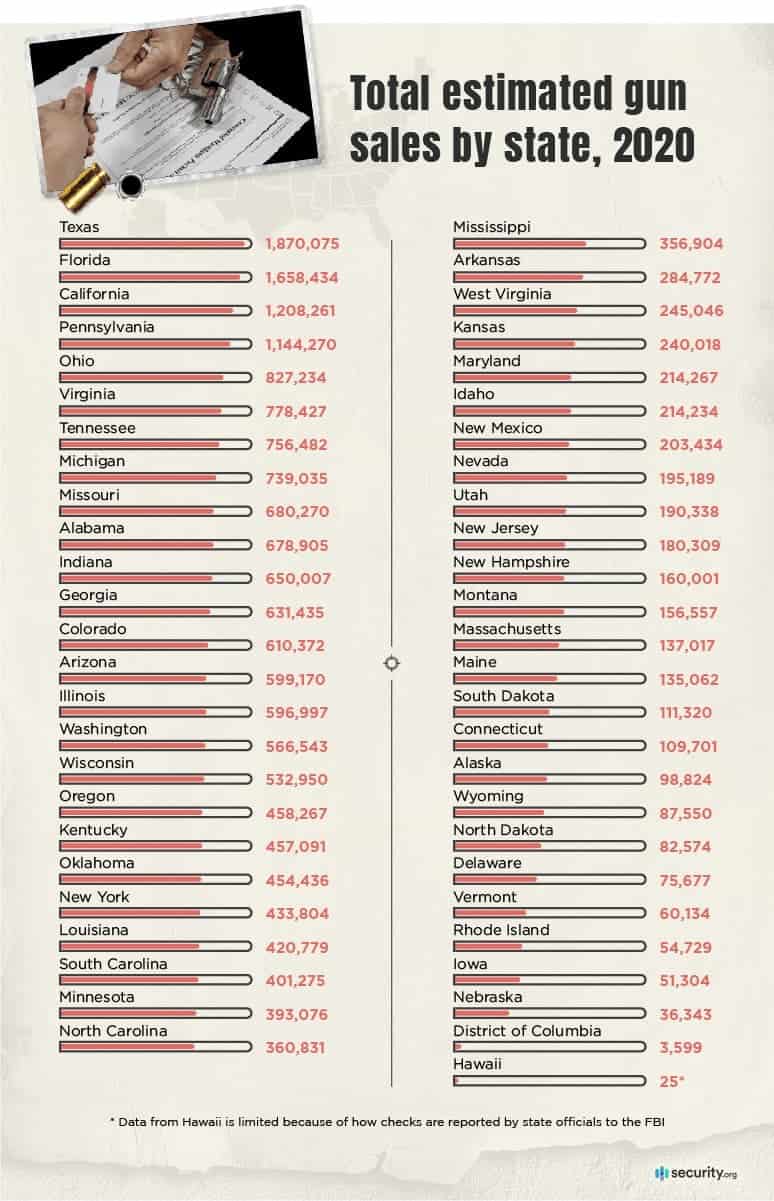 Wyoming, which ranks second to last for total estimated gun purchases, has the highest population-adjusted rate by just over 14 points, while Montana is second, and Alaska is a close third; less than one point separates Montana and Alaska. Another Western state, Idaho, is also in the top 10, while four Southern states are near the top of the list as well. Alabama is the only state to appear in the top 10 both for absolute sales and population-adjusted sales rates, while Iowa, Nebraska, and D.C. appear in the bottom 10 of both lists. D.C.'s rate of 6.5 per 1,000 inhabitants is just a fraction of Wyoming’s, and it’s about one-third the rate of the second-to-last state, Iowa.

Unsurprisingly, estimated gun sale rates in the West are the highest of the four major regions of the country. 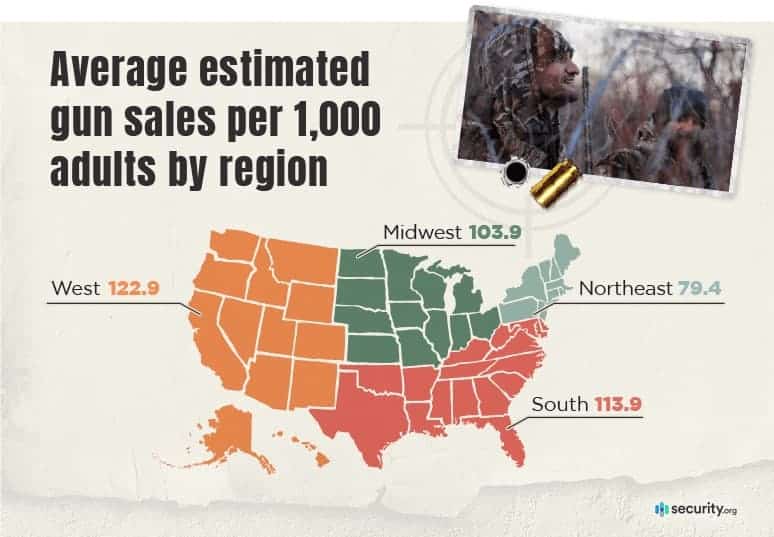 In keeping with the recorded increases in gun background checks in most states, all but one state has seen the population-adjusted rate of estimated gun sales rise over the past 10 years. Moreover, a dozen states have seen these rates rise by triple digits, led by D.C., where the rate has expanded by a staggering 900 percent in the past decade. Nebraska is the only state where this rate fell over the past decade, though the decline was slight (just over three percent). 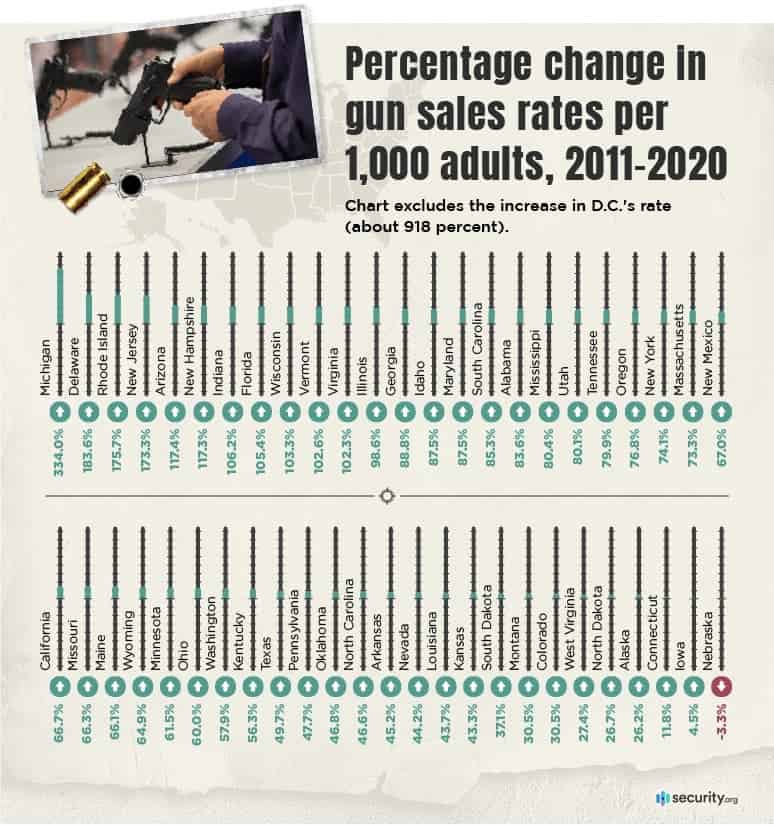 Did You Know: According to our research on robberies, the average value stolen from a residence is $4,600.

Generally, crimes involving guns follow a similar pattern on the state level, but there are some notable differences, depending on the state. For example, in Missouri and South Carolina, about 86 percent of murders involve guns; that rate is only 28 percent in Hawaii. 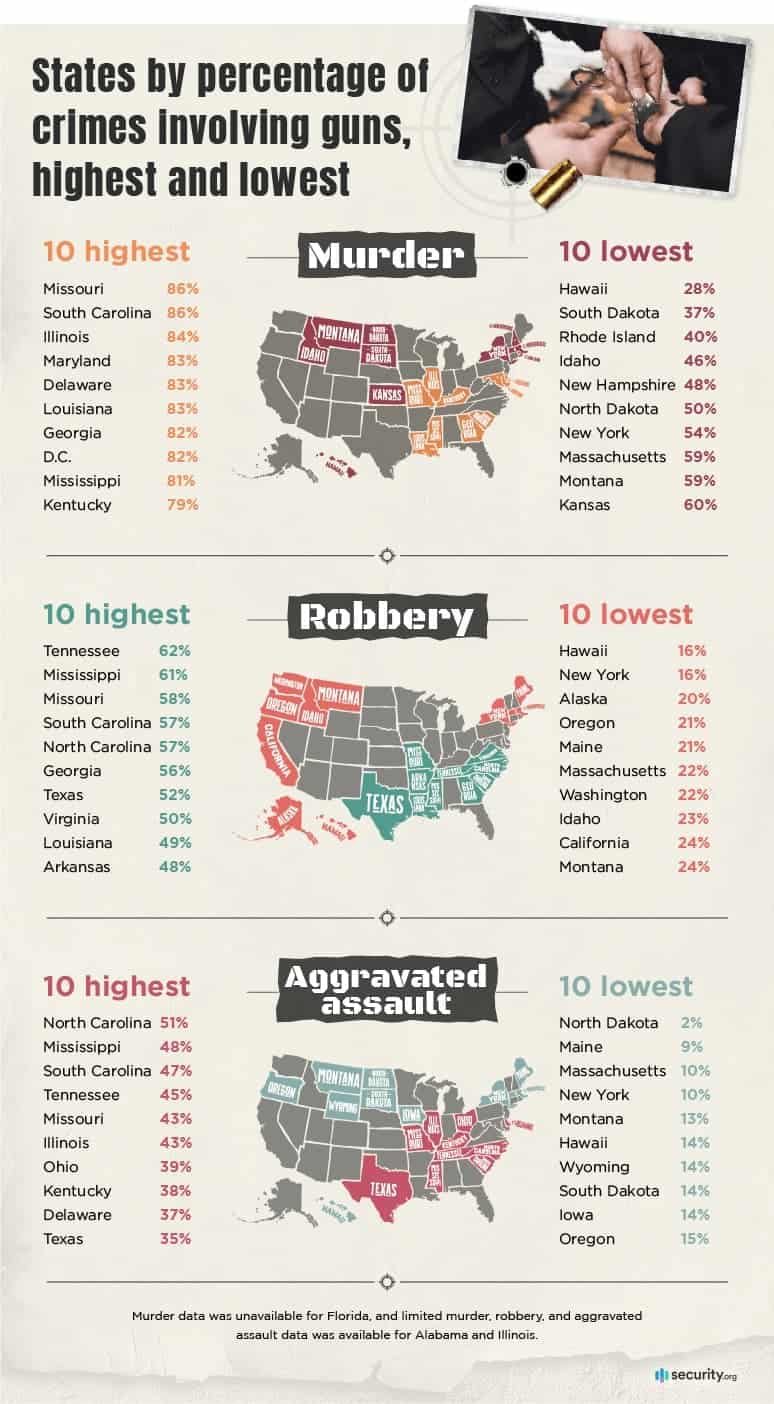 High population-adjusted rates of gun purchases don’t necessarily equate to higher rates of guns being used to commit crimes. For example, Wyoming, which had the highest population-adjusted rate of gun purchases in 2020 (208.3 per 1,000), had a below-average rate in guns used in homicides, robberies, and aggravated assaults (69 percent, 32 percent, and 14 percent, respectively, versus national rates of 75 percent, 37 percent, and 27 percent).

LEARN MORE: Read about homicide statistics based on the FBI’s most recent 2019 data.

This doesn’t hold true for every state or crime category, though. Mississippi, which ranks seventh for gun purchases (166 per 1,000), is among the top 10 states for gun involvement in murders, robberies, and aggravated assaults (81 percent, 61 percent, and 48 percent). It’s also important to note here that many of the firearms used in crimes are purchased illegally or stolen.

We know from FBI data that the majority of homicide victims are killed with guns. Guns are also the most common method by which Americans take their own lives, and gun-related injuries killed nearly 40,000 people in 2019, the most recent year for which the federal Centers for Disease Control and Prevention has published data.

Where are the rates of gun-related deaths the highest, including intentional and unintentional deaths as well as law enforcement intervention and other causes? Generally, gun homicide rates are highest in the South, while gun suicide rates are highest in the West. For example, the South’s average gun homicide rate is 7.5 per 100,000, which is about 83 percent higher than the next-highest region (the Midwest at 4.1 per 100,000). On the other hand, gun-related suicides occur at an average rate of about 11.4 per 100,000 in the West, about 24 percent higher than any other region (the South is second at 9.1 per 100,000).

According to CDC data, about 14,400 people were killed in gun homicides in 2019. This equates to a population- and age-adjusted rate of 4.7 per 100,000 people. Regionally, the only area of the country with a higher gun-homicide rate is the South at 7.5. 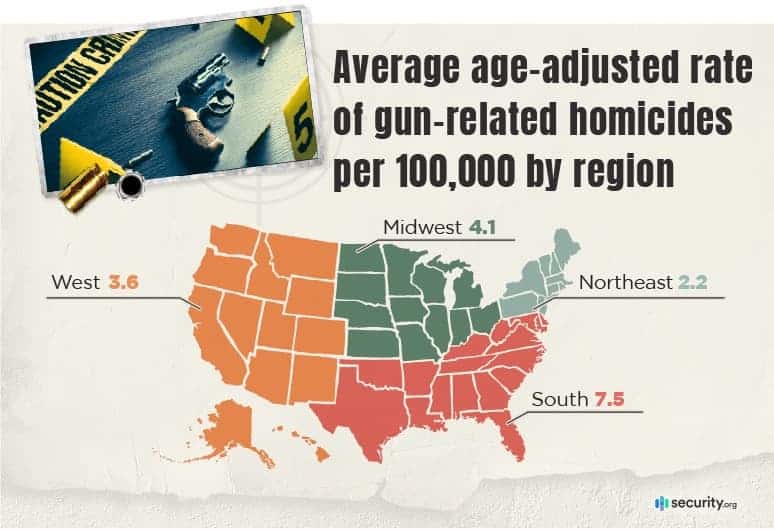 Data was unavailable for several states, but by looking at the rates of states with available data, it’s not hard to see why the South’s rate is the highest. All of the states in the top five of age-adjusted gun-related homicide rates are in that region, and seven of the top 10 are Southern states. The highest-ranking Northeastern state is Pennsylvania. 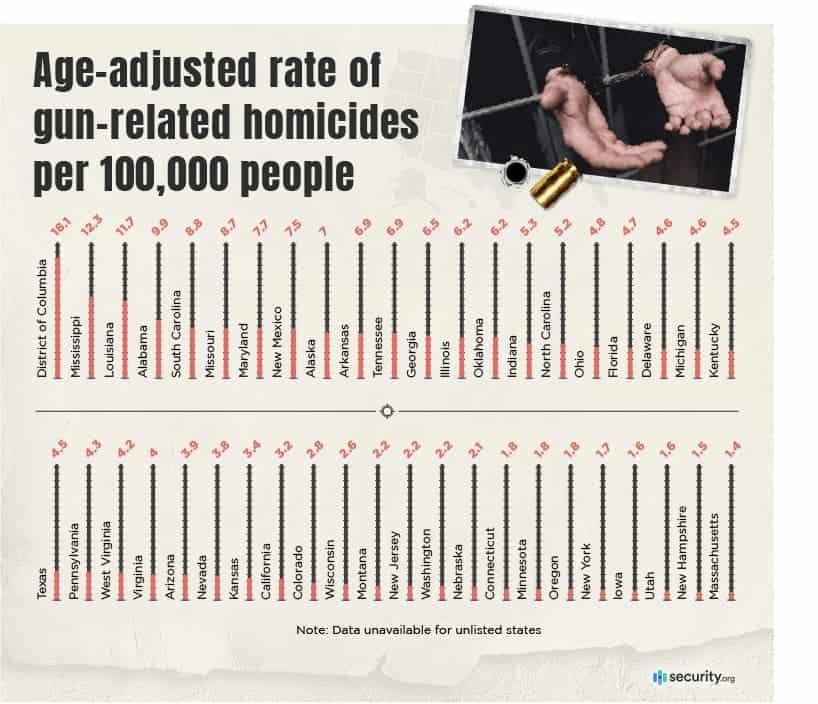 Suicide is the most common way that Americans die from gun-related injuries today, with intentional self-harm accounting for nearly 23,941 gun deaths in 2019. The age- and population-adjusted gun suicide rate (8.9) is almost 80 percent higher than the gun homicide rate (five). Western states have considerably higher gun suicide rates than other regions; in fact, the West’s gun suicide rate is more than double that of the Northeast. 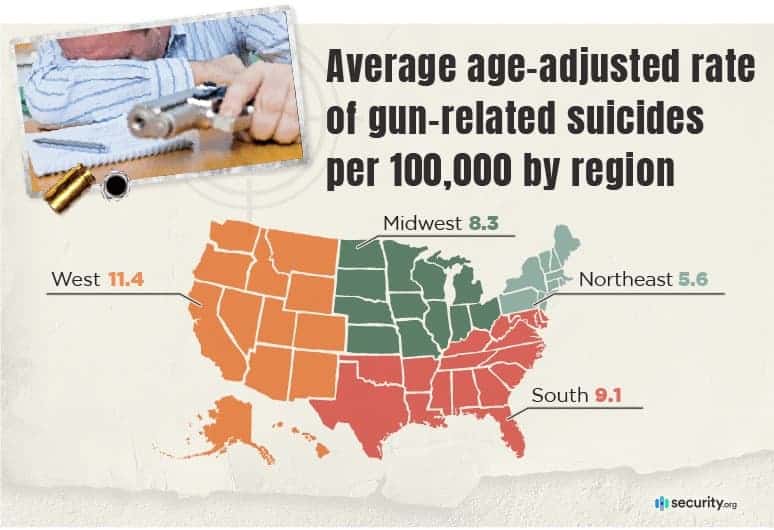 Wyoming’s age-adjusted gun suicide rate is by far the highest in the country at 19.7 per 100,000 people. New Jersey, Massachusetts, and New York, all in the Northeast, have the three lowest rates. 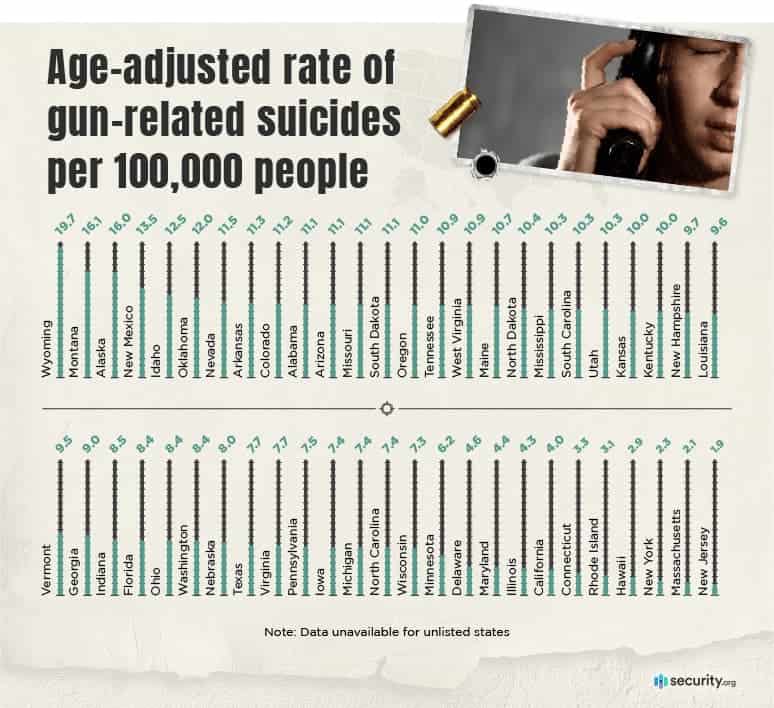 As with most issues, it’s difficult to make sweeping generalizations about guns. While most states have seen estimated gun sales increase, because crime and health data tends to run about a year or two behind, it’s hard to say whether increased estimated gun sales relate to the use of guns in crimes, violence, or self-harm. However, crafting smart policy should begin with a fact-based look at the numbers.

Gun sales: To calculate the number of gun sales per year and the rate of gun sales per 1,000 adults, we used information from the FBI’s National Instant Criminal Background Check System, which reports the number and type of gun background checks for each year since 1998. As mentioned earlier, we used a formula established by the Small Arms Survey, a global firearms research project, for employing this dataset to estimate the number of gun sales in a given year. That formula calls for combining the number of background checks for handguns and long guns with double the number of multiple background checks (which is a check for at least one handgun and one long gun) and then multiplying that number by 1.05. This gives us a total estimated number of guns purchased through federally licensed firearms dealers. We then compared those figures to the number of adults in each state to create a population-adjusted rate, since, in general, it’s illegal to purchase a gun if you’re younger than 18. Our data includes all 50 states and the District of Columbia, but excludes U.S. territories.

Gun crimes: Our data came from the FBI’s annual Crime in the United States report for 2019. We consulted national tables covering weapons used in crimes and similar tables for the states.

Gun deaths: We consulted the CDC’s WONDER database, which lists underlying causes of death and age- and population-adjusted rates for Americans going back to 1999. We created custom tables that included all firearm-related deaths, including intentional and unintentional gun-related deaths. This includes cases of murder, homicides by law enforcement, acts of terrorism and others.

No doubt, guns and gun control are emotionally charged issues. But we hope that a sober analysis of the data surrounding the gun-related topics we’ve explored contributes to the discourse around guns. If you find this information useful, please feel free to share anything you see here for noncommercial purposes, so long as you provide a link back to the URL of this page.