There is no publicly released set of government statistics related to police violence. So, to understand how common police killings are, it’s necessary to look elsewhere. Mapping Police Violence is a team of researchers who collect and analyze data on police killings, and its database goes back to 2013.1

What is the state of police violence across the U.S.? How common are police killings, and which cities are most likely to experience police killings? Read on for our analysis of police-violence statistics.

The State of Police Violence 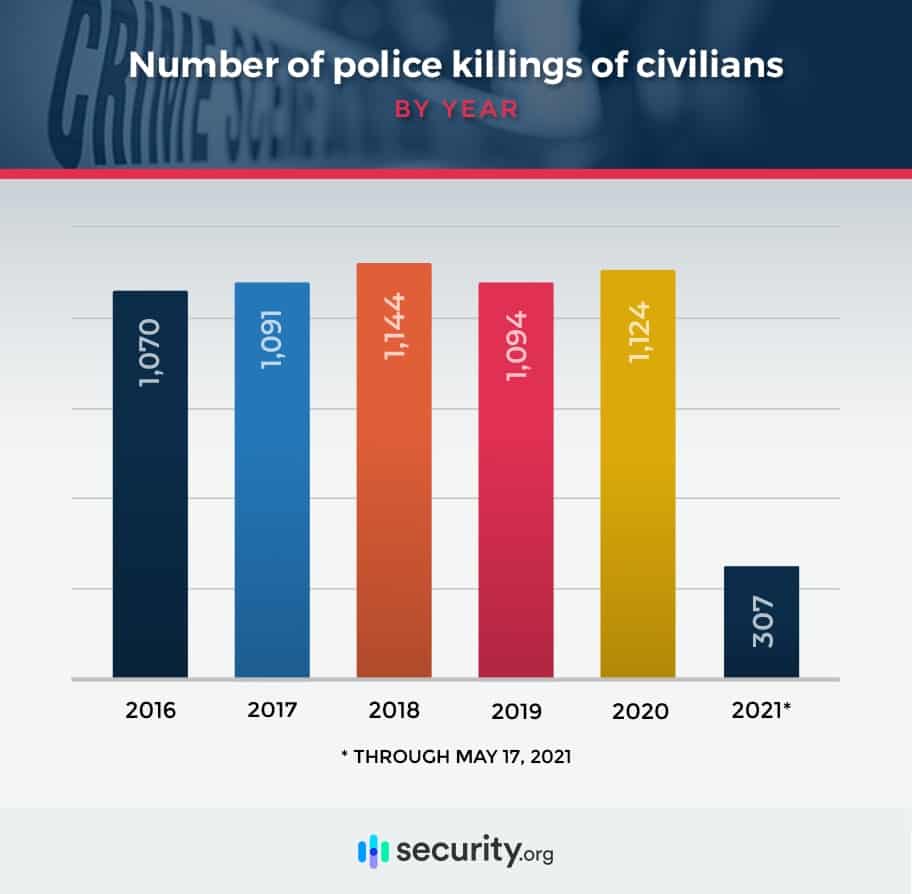 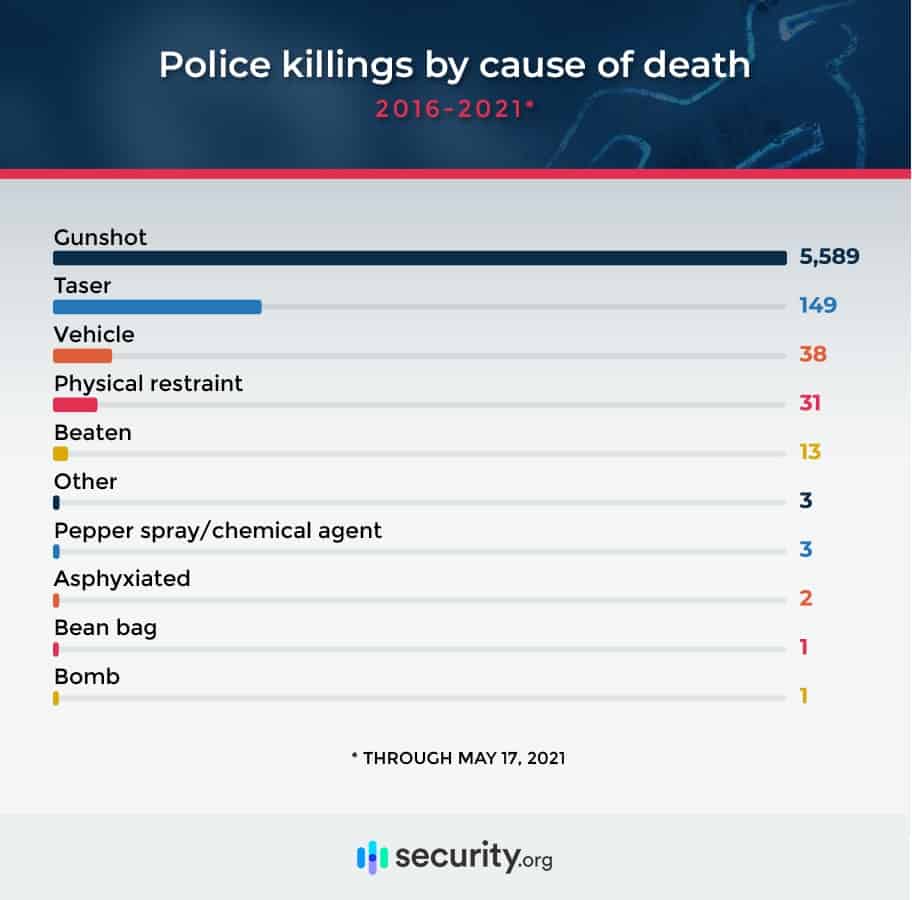 Criminal prosecution for police violence remains incredibly rare. In fact, at no point over the past five years has the rate of criminal charges being filed for police killings exceeded 2 percent of cases. And 2021 is on pace to have one of the lowest rates of prosecution.

Former Minneapolis police officer Derek Chauvin’s conviction for the murder of George Floyd marked the single instance in 2020 of a police officer being convicted of any charges after killing a person.

About a dozen cases of police killings are still working their way through the system, but in 99 percent of cases in 2020, prosecutors did not file charges. So far in 2021, four cases have resulted in criminal charges against police officers. 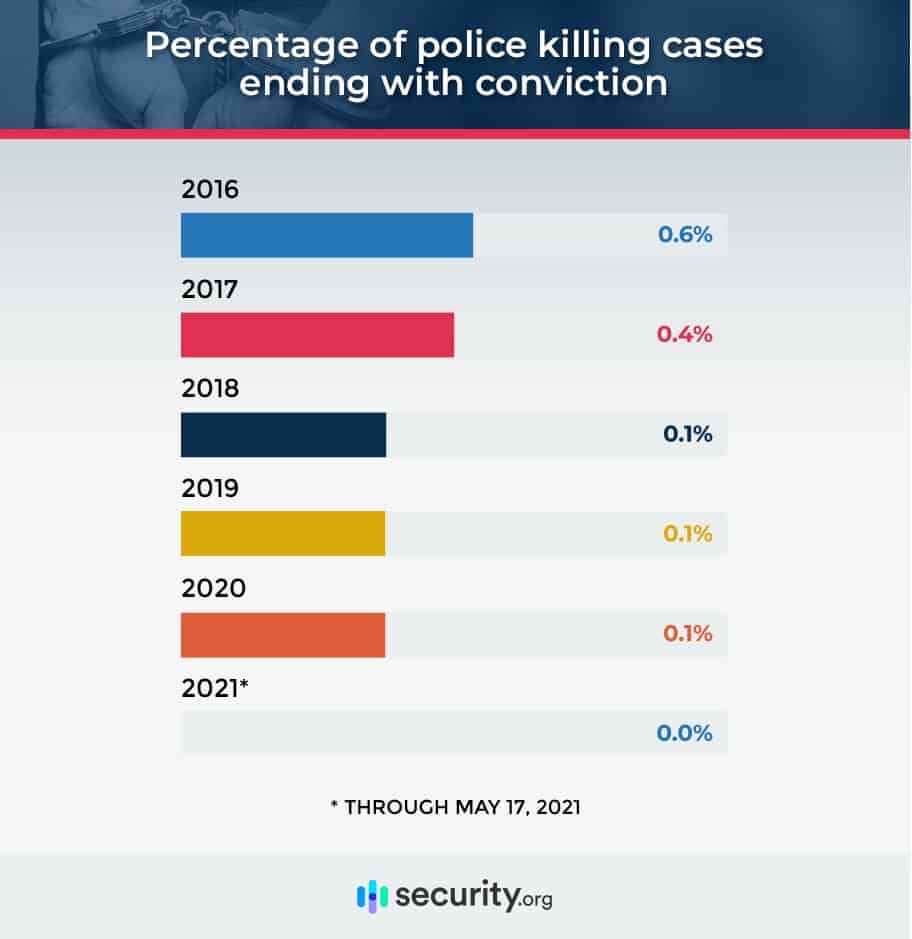 Charging police officers with crimes after they kill someone requires a high bar. Many observers believe that the only reason Chauvin was charged, tried, and convicted of Floyd’s murder was that a bystander recorded the incident with their phone.

Many factors shield police officers from prosecution, in most cases. Public trust in police officers, a code of silence in police agencies, and the murkiness of police-prosecutor relationships are among the issues researchers cited.

Even when an officer is on trial, prosecutors may face uphill battles to convict, said civil rights lawyer David Rudovsky.

“There is a tendency to believe an officer over a civilian, in terms of credibility,” Rudovsky told Vox in 2021.2 “And when an officer is on trial, reasonable doubt has a lot of bite. A prosecutor needs a very strong case before a jury will say that somebody we generally trust to protect us has so seriously crossed the line as to be subject to a conviction.”

Cities Where Police Killings Are Most Common

Over the past five years, Los Angeles has seen the highest number of police killings, 70. Phoenix is second with 46, while police in Chicago have killed 45 people in that time period. 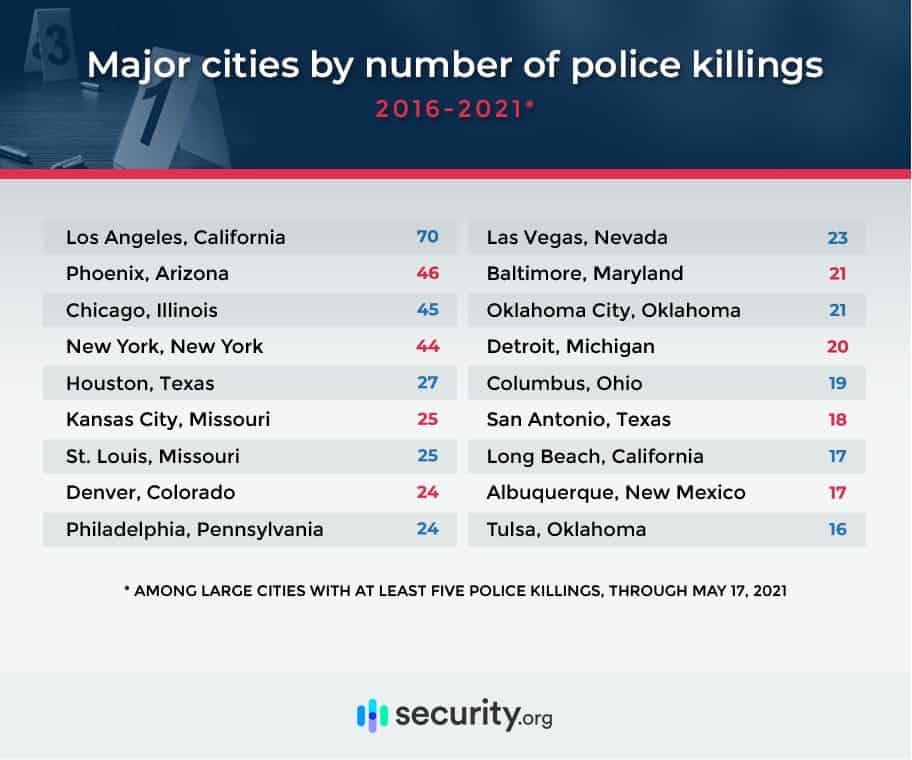 Los Angeles has a particularly grim history when it comes to police violence. The acquittal of five white police officers in the brutal beating of Black motorist Rodney King sparked days of civil unrest in the city. This was fueled in part by the fact that a bystander caught the entire attack on camera.

But decades before the 1992 riots, the city’s predominantly Black neighborhood, Watts, was the site of a five-day skirmish between police and civilians.

Police killings remain common in LA. In fact, a recent in-depth analysis by the Los Angeles Times found that LA County law enforcement has killed at least 928 people since 2001. The city has only charged two officers.3

Police killings in Phoenix have also been the subject of public and media scrutiny. A study by The Arizona Republic showed that fatal police shootings in Phoenix surged in 2020 despite the expansion of the racial and criminal justice movement. 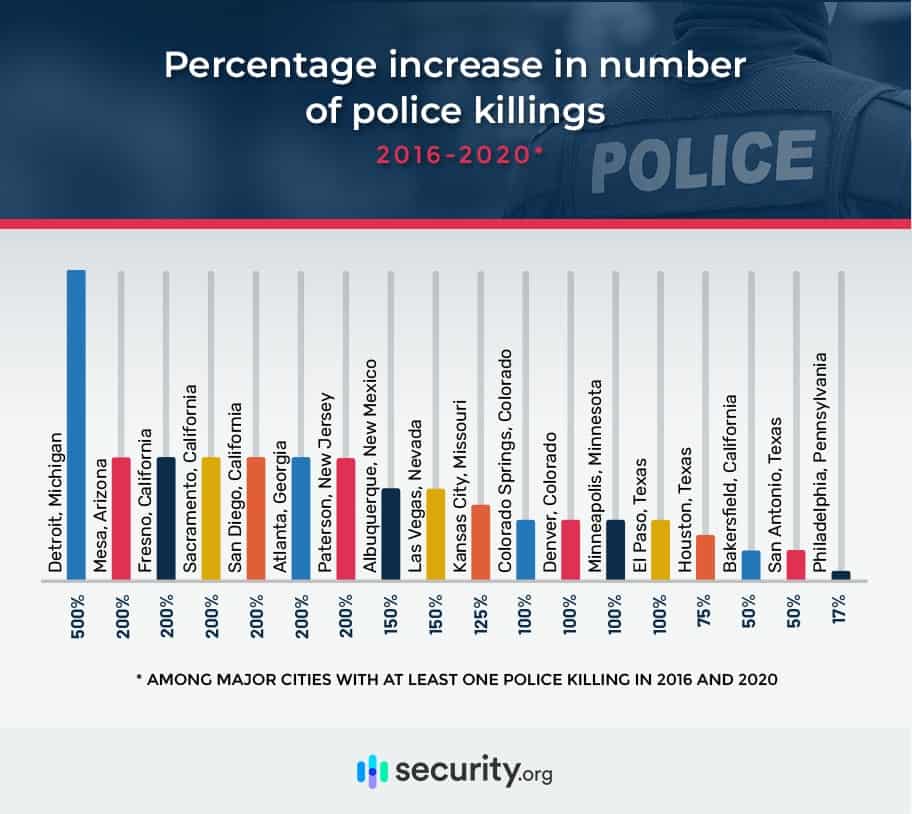 Accounting for population differences, the deadliest police department in the U.S. in 2020 was the San Bernardino Police Department. The population-adjusted rate of police killings by San Bernardino police was 2.8 per 100,000, almost double the rate of the next-highest department, Kansas City.

According to a Mapping Police Violence analysis of San Bernardino police shootings, in 74 percent of shootings since 2013, the officers involved did not attempt non-deadly force first.5 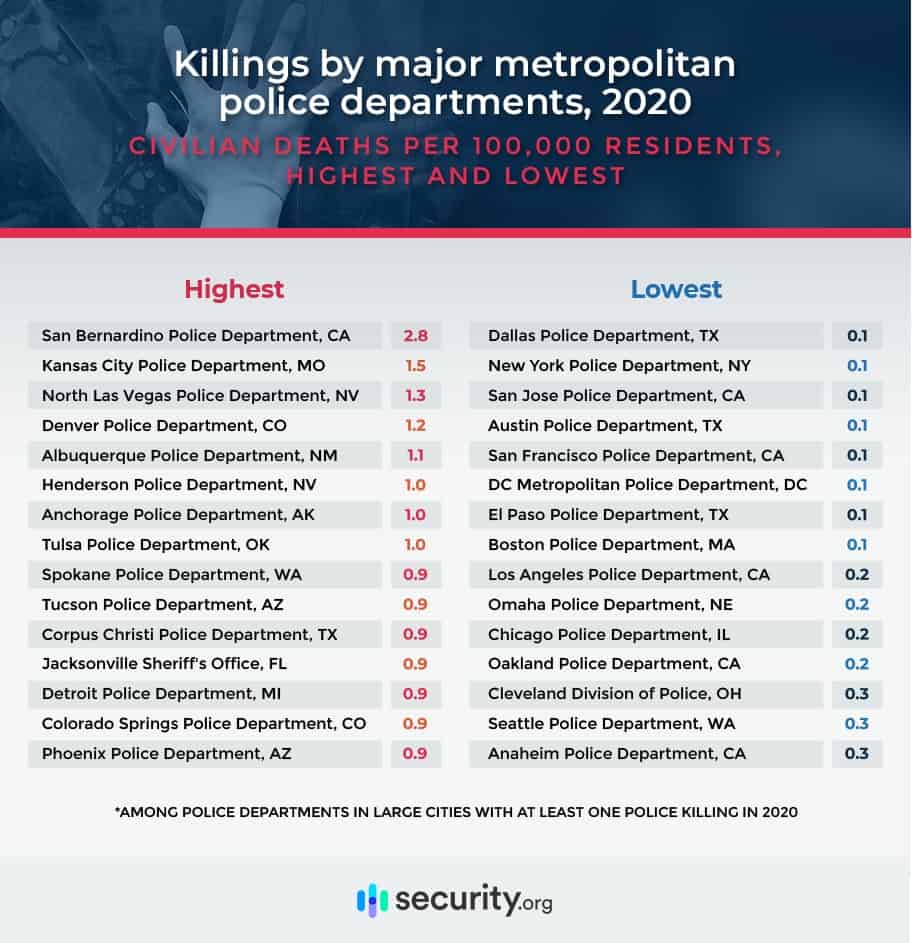 At the heart of the Black Lives Matter movement and the 2020 protests after the murder of George Floyd were discrepancies between the rate at which police kill white people and the rate at which they kill Black people, Native Americans, and Hispanic people. 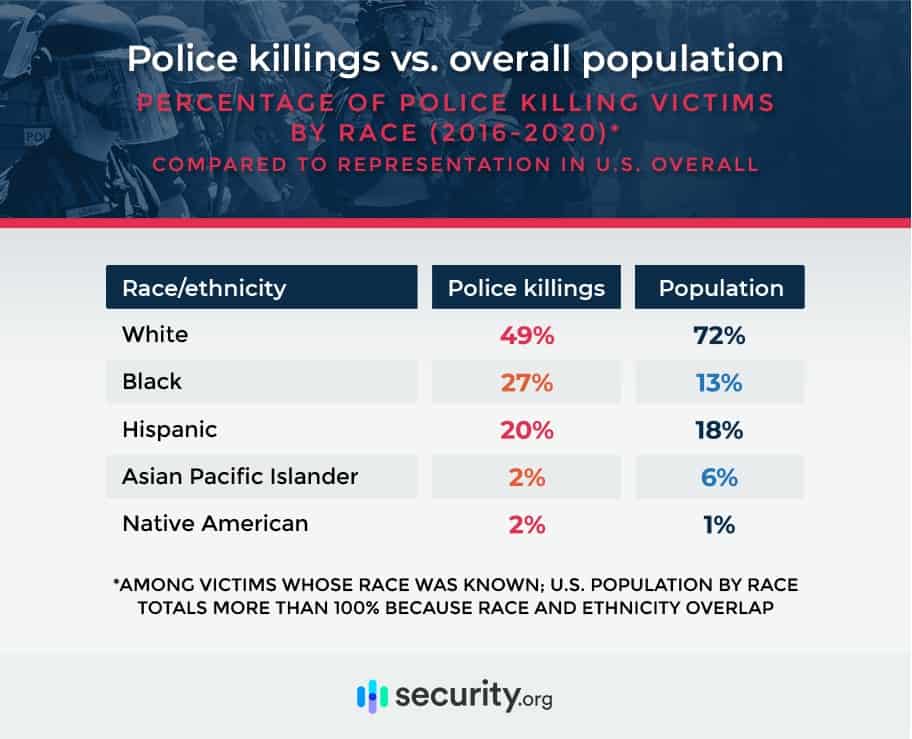 In the U.S., homicide generally occurs at a rate of about 5 per 100,000 people, but many police departments’ rates of police killings far exceed that for certain ethnic groups.

Phoenix police most consistently have high population-adjusted rates of killings of Black, Hispanic, and Native American people. In fact, the department appears in the top 10 for the rate at which police killed individuals in all three groups. Police in Albuquerque, Denver, Mesa, Oklahoma City, Reno, Spokane, and St. Louis all appear in the top 10 for these two racial groups. 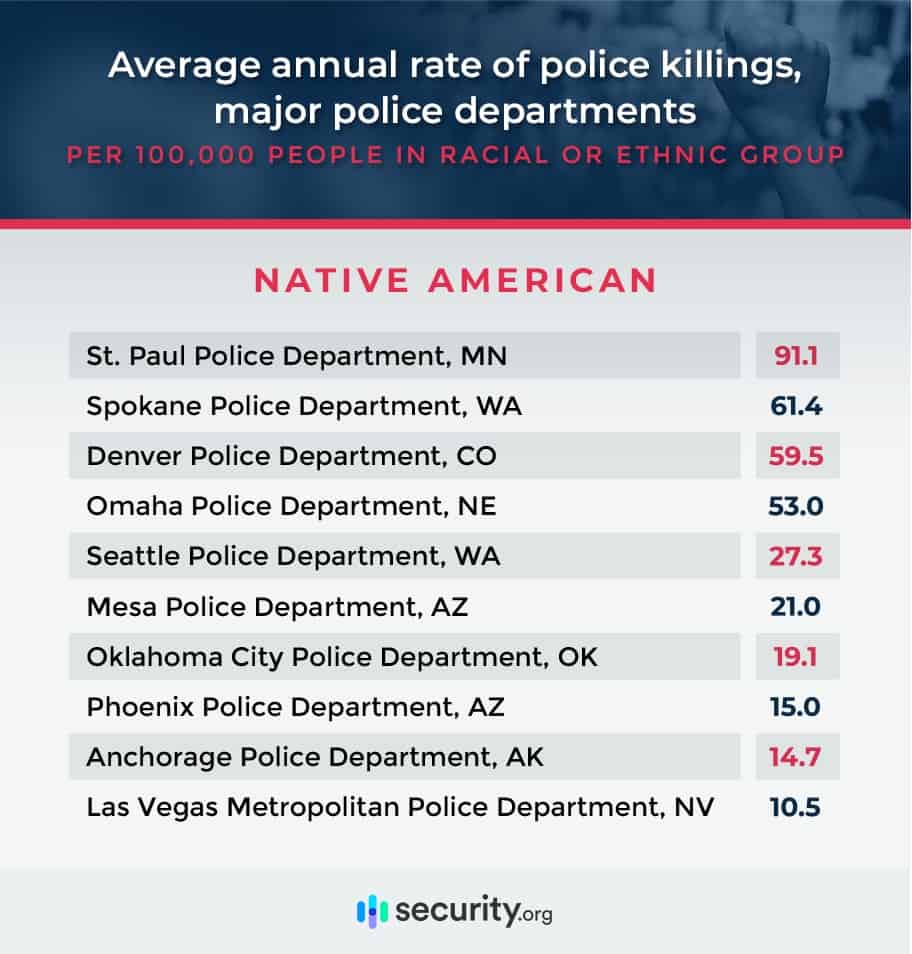 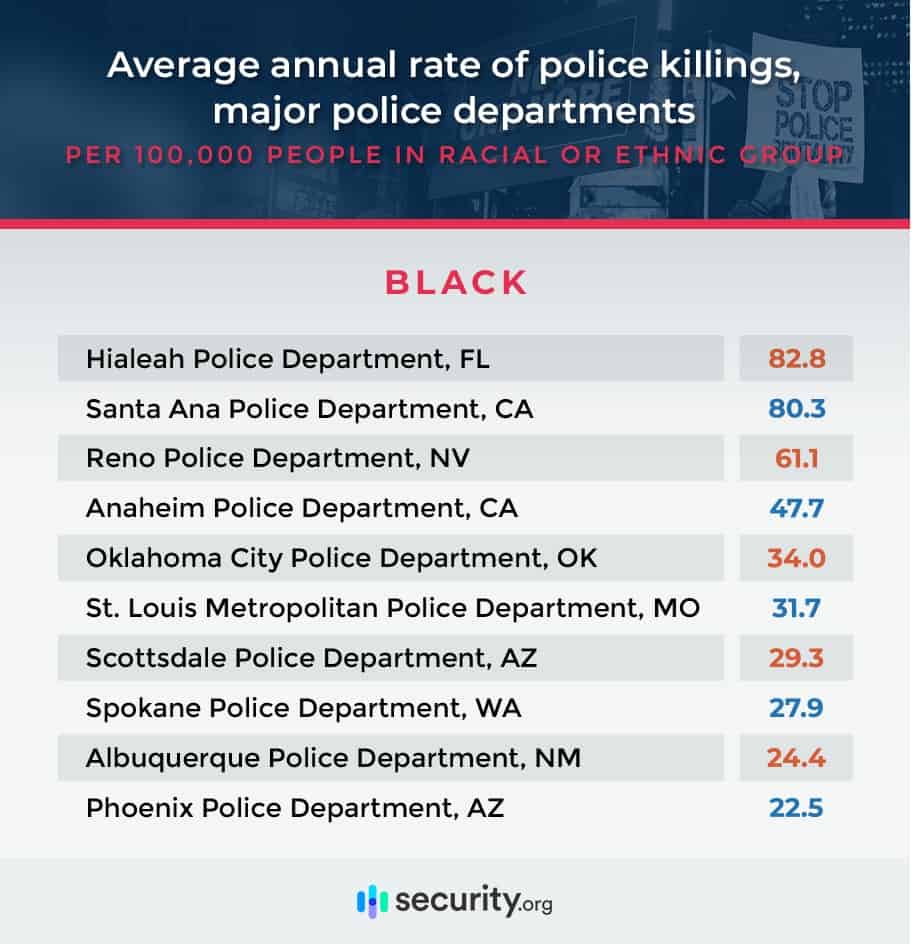 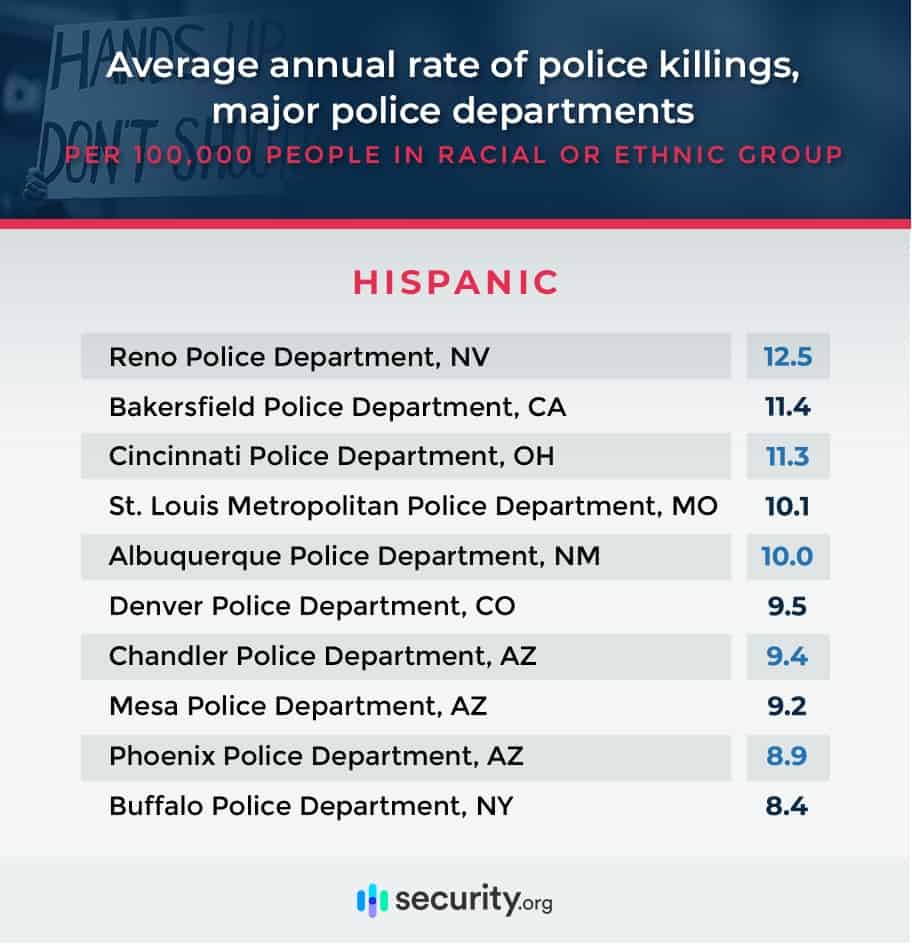 Zooming out to the state level, in almost all states, the rate at which police kill Black people is far higher than the rate at which they kill white people. In some cases, the differences in fatal encounters with police in the U.S. are startling.

Colorado, Idaho, North Dakota, Nebraska, South Dakota, and Washington all have disparities between the rates of killings of Native Americans and white people, though fewer states had qualifying incidents. To avoid skewing data too heavily, we excluded states that had only one police killing of someone in the ethnic group.

No state had double-digit disparities between Hispanic people and white people.

While there’s room for debate over policy interventions that might limit the number of police killings, there’s inadequate accountability or scrutiny for these incidents.

When police kill a civilian, the initial assumption by some is that the incident was justified, while others automatically assume it wasn’t. While the truth may be somewhere in between, the public can’t possibly make informed decisions without cold, hard facts.