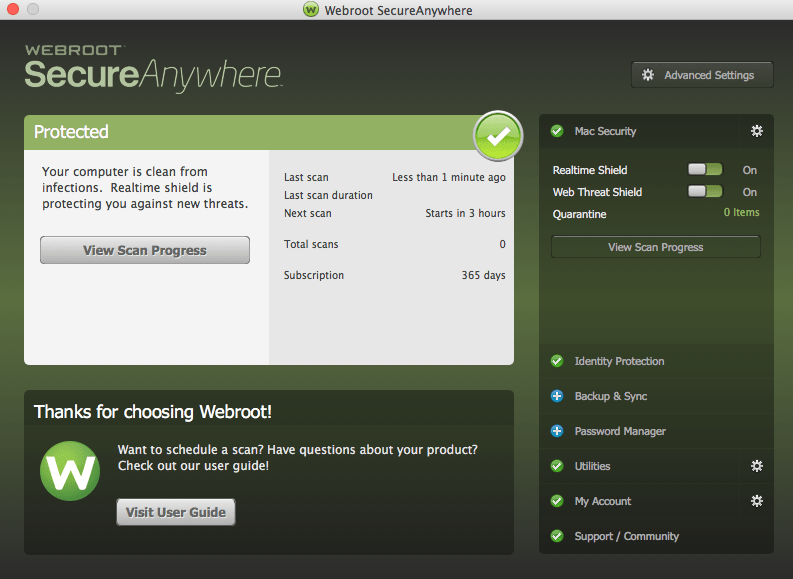 Webroot is one of the few antivirus programs to five its users a 14-day free trial to try out its PC, macOS, iOS or Android apps.
View Packages
Contents: Security Performance Our Experience Pricing App Customer Support Summary
View Packages

Webroot is one of the lesser-known names in the antivirus software industry, and when we tested it out, we found some pretty interesting information regarding its malware and virus detection. Is it worth it? We think so, but not for everybody.

Webroot’s Security Breach: Are You Protected?

When we dive deep into antivirus software, it’s not only about our user experience, although that’s clearly an important part of our reviews. We also look into the company’s past to see if they’ve had any lawsuits, security vulnerabilities, or other events that would make us trust them less. In 2019, Webroot had a security breach1 when hackers spread ransomware across its customer systems. Webroot said that the breach only affected a small number of customers, and responded by mandating their existing two-factor authentication method, which means that users must enter a passcode sent to their mobile devices in order to log in, preventing unauthorized users from access.

Aside from this security blip, we checked out Webroot’s privacy policy2 to see what data of ours they kept, and whether or not they shared it with third-party advertisers. Well, it turned out that they kept a lot of our information, including:

While this data is pretty standard for antivirus software, we wondered exactly how Webroot shared it with third parties, if at all. Webroot makes it clear that they don’t sell personal information, although it may be shared when advertising their services on other apps or websites. However, you can adjust these settings in your browser, so overall, we’re happy with Webroot’s handling of our personal data.

Webroot’s Software and How It Performed

Let’s look into Webroot’s features more closely, namely what it scanned for and the other ways that it protected us from cyber threats.

How Webroot Protected our Macbook Pro

Note: Webroot’s software monitored our computer for suspicious behavior, not just signatures that are already known to be malicious in established databases.

When we first opened Webroot, it immediately scanned our Macbook for malware and viruses, finding none. That first scan took about 22 minutes, which is actually much faster than many other services we’ve tested. Not only could we do a scan whenever we wanted to, but by default, Webroot automatically scans every hour. And unlike other software, it doesn’t slow down computer performance or internet browsing speed while scanning. Plus, a firewall protected our network at all times, which isn’t always guaranteed with antivirus software.

Overall, Webroot’s app was really easy to use and we love how the scans were short and sweet. Our only complaint is that we wish everything took place in the app and not in a combination of the app and the website.But this is a common quality among antivirus software, so it’s not a dealbreaker.

Did Webroot Detect Viruses and Malware?

Let’s get back to the basic function of antivirus software: how well did Webroot actually protect our computer?

As of A.V Labs’ testing in June, 2020, Webroot detected 98.9 percent of all widespread malware that was the most prevalent in the past four weeks. While this sounds decent enough, the industry average was a full percentage point higher. And when it came to zero-day attacks and threats over the internet or email, that detection rate dropped down to 66.5 percent, which is the worst we’ve seen among the 40 antivirus software products that we tested. Yikes!

When it came to detecting viruses on our computer, which we carefully downloaded without clicking, Webroot was unable to process four out of the five, which was concerning. It only detected one virus out of five, an EXE file, also found by 66 percent of the other software we’ve tested. And again, it’s not great that Webroot couldn’t process the other four viruses, which were common file types like XLSX, DOC, SLSM, and XLS.

Although Webroot’s virus and malware detection were lacking, we did appreciate its user experience, which was pretty seamless in our opinion.

We bought the “antivirus-only” plan from Webroot, which cost $37.49 for three devices for one year (if you want one device or a plan for two or three years, check out our Webroot pricing page to learn more about their options). After filling out our payment information on the Webroot website, we downloaded the app from the website directly (no intermediary installer app here!). Within a few seconds, the app was downloaded and began its first scan. Overall, this process was super smooth, which is not always the case for antivirus software. But how did it work after we got it downloaded?

The next section was Identity Protection, which only included one feature called Phishing Shield.

Between our Macbook Pro, Kindle Fire, iPhone and Smart TV with built-in Chromecast, we’re constantly toggling between different devices, and accessing files can be a bit of a pain to email back and forth. But since we didn’t buy the Internet Security Complete package, we didn’t actually pay for this 25 GB of cloud storage, so when we clicked on it, we were brought back to Webroot’s website in hopes of buying more software. The price was $59.99 for coverage of up to five devices for a year. While that’s decent value, in our opinion, we were happy with our current coverage. Many antivirus companies tack on extra features, like VPNs, secure storage or password managers to up the prices. Unfortunately, this sort of upselling is really common in antivirus software, but that doesn’t make it any less annoying.

Another feature only available in the two Internet Security packages is a password manager. Webroot’s password manager is powered by LastPass, which uses Touch ID to log into accounts rather than manually entering credentials. The sign-up process from the Webroot app is a bit clunky, at the end of which we discovered a simple Chrome extension integration…and a charge for the service (boo!). We already happen to have a LastPass subscription, but the Webroot Internet Security bundle is actually a better value. We wish we had known about it earlier!

Under Utilities, we saw two buttons: Manage Active Processes and Reports. When we clicked on Manage Active Processes, we found a tab called System Control, which showed us all “Active Processes”, or files and web pages we had open, and whether or not they were allowed, monitored or blocked. The Reports section is divided into Scan Logs, which includes logs of our most recent scans. It also includes an area to submit files like screenshots when things go wrong, a way to help Webroot improve their products.

Last but not least was Support/Community, which included buttons to contact customer support and speak in user forums.

Here, we have the pricing for Webroot’s antivirus plan, but again, look at our pricing page for more options. Webroot also has plans for businesses and VPNs, so make sure you read about all the options at hand. There’s even an antivirus software for gamers!

We tested our Webroot on our Macbook Pro, but they also have iOS and Android apps, both of which have ratings of 3.7 out of five on the Apple and Google Play stores. However, the apps are named differently:

These are decent but not great ratings; many Android-users, in particular, claimed that the app didn’t work on their tablets, so Webroot may be a better antivirus software for iPhone than it is for Android.

There were a few ways for us to contact Webroot’s customer support, including creating an online ticket, send them a message, calling them on the phone or simply checking out their online help center. While we wish they had live chat as well, we found their support page to be pretty clearly laid out and extensive.

Given their low virus and malware detection, we don’t recommend Webroot overall. However, we’d be willing to reconsider if Webroot improved its detection. As it did have a pretty seamless user experience, we didn’t dislike everything about the software. However, when it came to that core antivirus and anti-malware functionality, Webroot missed the mark.