Childhood is supposed to be a carefree time where kids can learn and grow in a safe environment, without having to worry about (or even know about) things like identity theft. However, children can fall victim to identity theft, especially if a parent isn’t monitoring their credit or personally identifiable information (PII) like their Social Security numbers (SSNs).

This study focuses on parental awareness, attitudes, and behaviors to prevent identity theft. In general, most parents are aware of and concerned about the problem and many follow best practices like disposing of sensitive electronic records and limiting the use of their children’s SSNs. However, at least a third of parents say they aren’t very concerned or aren’t concerned at all or don’t take commonly suggested preventative measures.

How Common Is Child Identity Theft and Fraud?

In 2017, over one million children were victims of identity theft 1 according to the research firm Javelin Strategy. In our research of more than 600 parents of children under the age of sixteen, 14 percent responded that their child’s identity has been stolen, which would equate to roughly 10 million children. 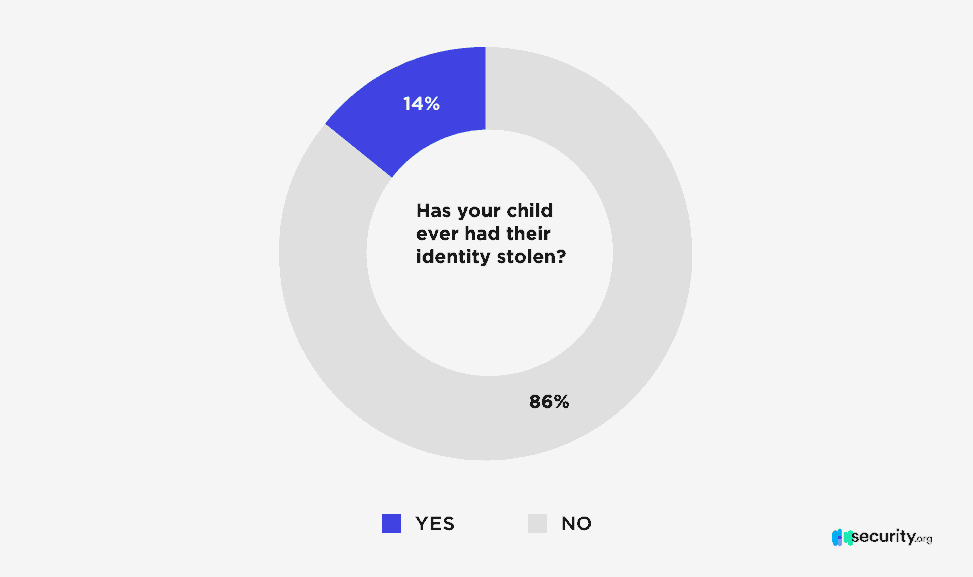 We expect children are targeted more often because they are less likely to discover identity theft before adults who apply for loans, file tax returns, and other actions that require the use of their SSNs. Most people who have their identities stolen as children don’t discover the theft until they are adults, so stealing children’s identities gives the thieves a wider window to use their credentials versus adults. 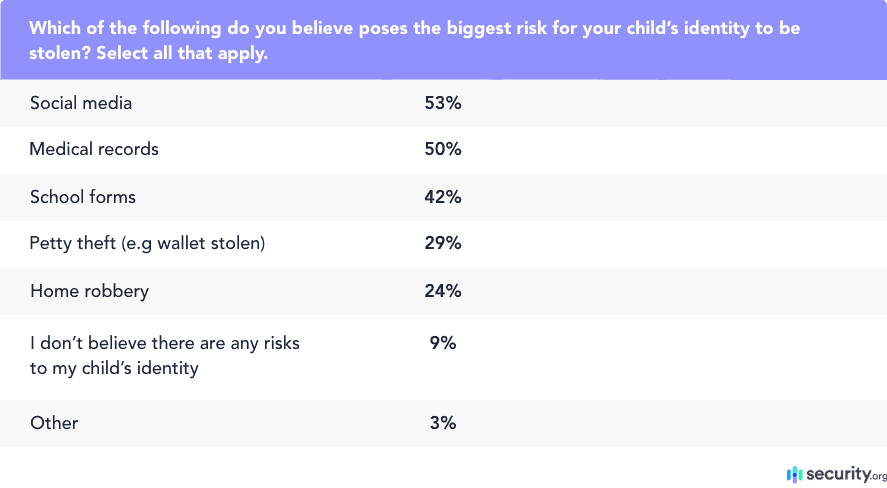 Regardless of the level of concern regarding child identity theft, most parents reported that they shred documents with their children’s PII, store these types of documents and electronic records securely, and only provide their children’s SSNs when necessary. However, 15 percent of parents didn’t take any action to prevent child identity theft, which is striking considering its potential consequences. 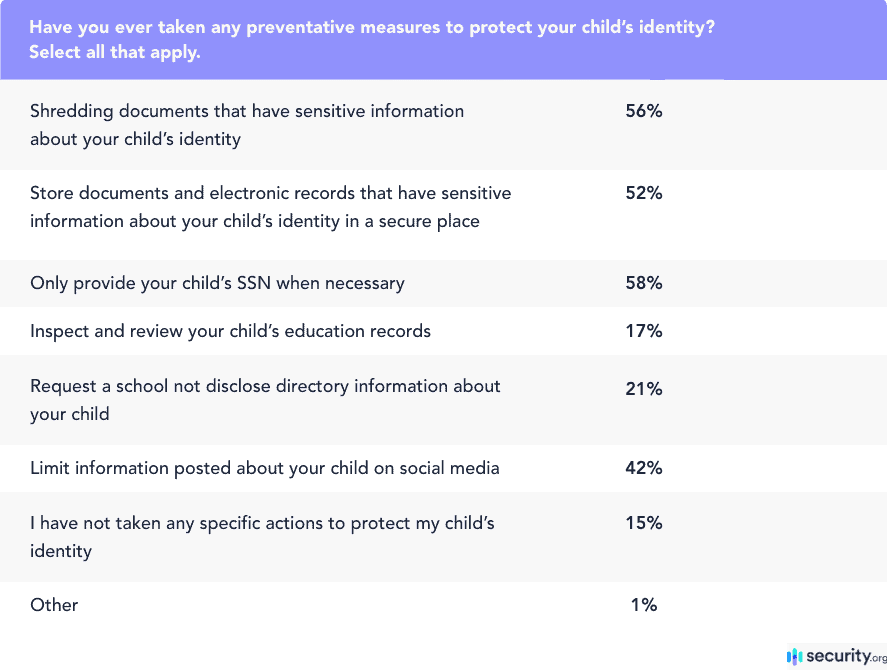 We looked specifically into how parental concern affects the measures parents took to protect their children from identity theft. 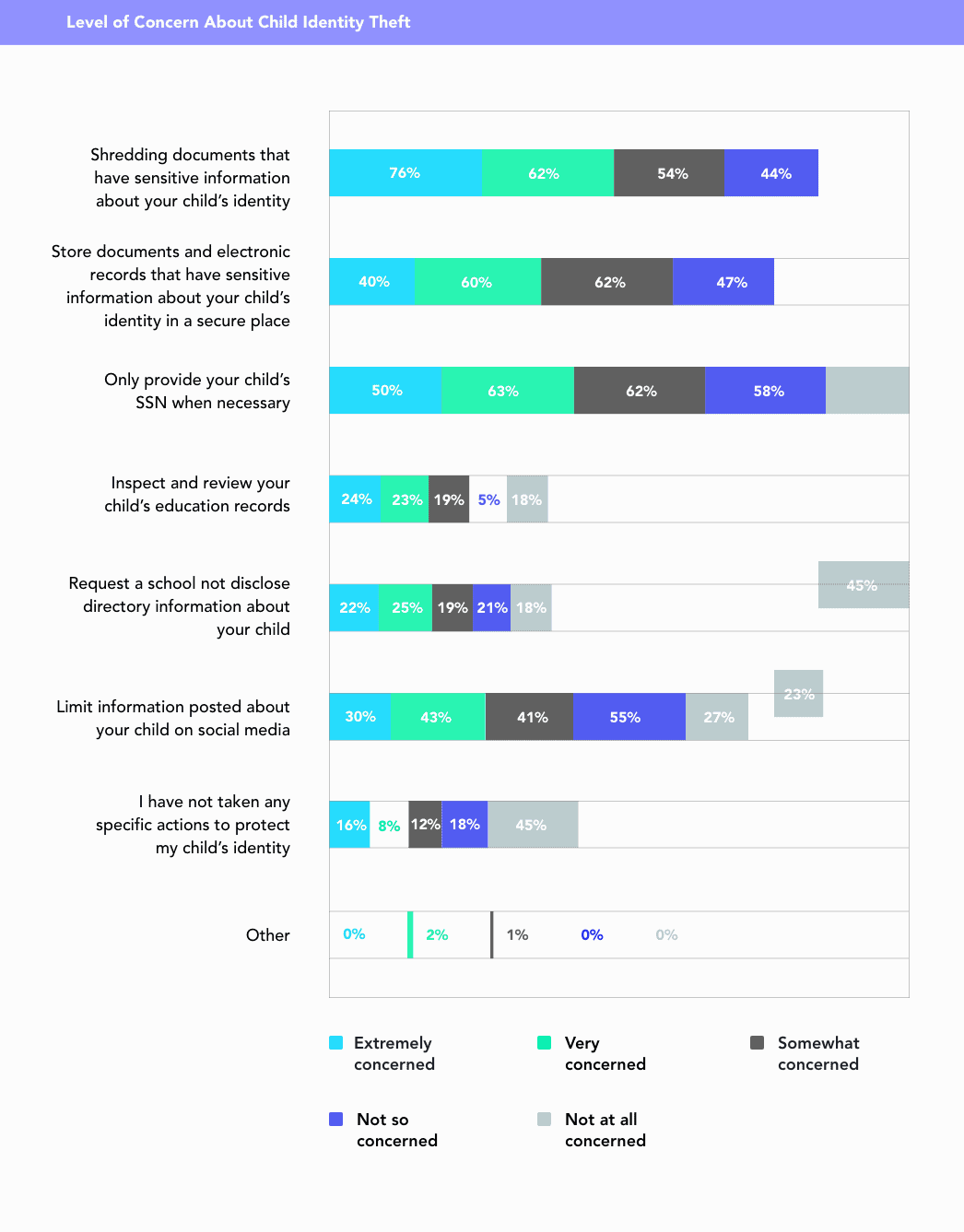 Even parents who were not at all concerned about child identity theft take preventative measures to protect their children’s PII; 45 percent shredded documents that contained sensitive information and only provided their child’s SSN when necessary. Parents that fell in this not so concerned group were also more likely than more concerned parents to limit information posted about their children on social media, which was counterintuitive, seemingly. Why aren’t more concerned parents supervising and controlling information about their kids on social networks like Facebook, Instagram, and the increasingly popular Tik Tok?

It’s unclear from our research why more concerned parents aren’t limiting information posted about their children on social media; overall, less than half of the more concerned parental groups limited this information, which seems low compared to the other precautions they take. Similarly, in a study conducted by the University of Michigan2 regarding parental rules about their children’s use of technology, only 18 percent of parents said that they had rules about oversharing which required their children to get explicit permission before sharing information online.

In the same vein, only seven percent of parents supervised their children online to ensure that they were following their established rules. However, this study did not connect parental supervision or rules surrounding their children’s Internet usage with child identity theft, so more research needs to be done to demonstrate the connection between the two, or lack thereof.

In general, however, parents not so concerned or not at all concerned with child identity theft were less likely to shred documents with PII and store documents and electronic records securely than more concerned parents, which was not surprising.

The Victims of Child Identity Theft

Identity theft can happen to any child that has a Social Security number, but some groups are more likely than others to fall victim.

Being online necessarily means using your personal information to create accounts, whether that’s your name, email, bank account information, and more, so it stands to reason that kids who are online more are more susceptible to identity theft and even cyberbullying. However, we were surprised to find out that kids who are the victims of cyberbullying are nine times more likely to be fraud victims than kids who weren’t cyberbullied, according to Javelin Strategy. In our recent research on cyberbullying, we found that about a fifth of parents with kids ages 10 to 18 said their children had been cyberbullied before, making this sizable portion of the population more susceptible to identity theft as well. 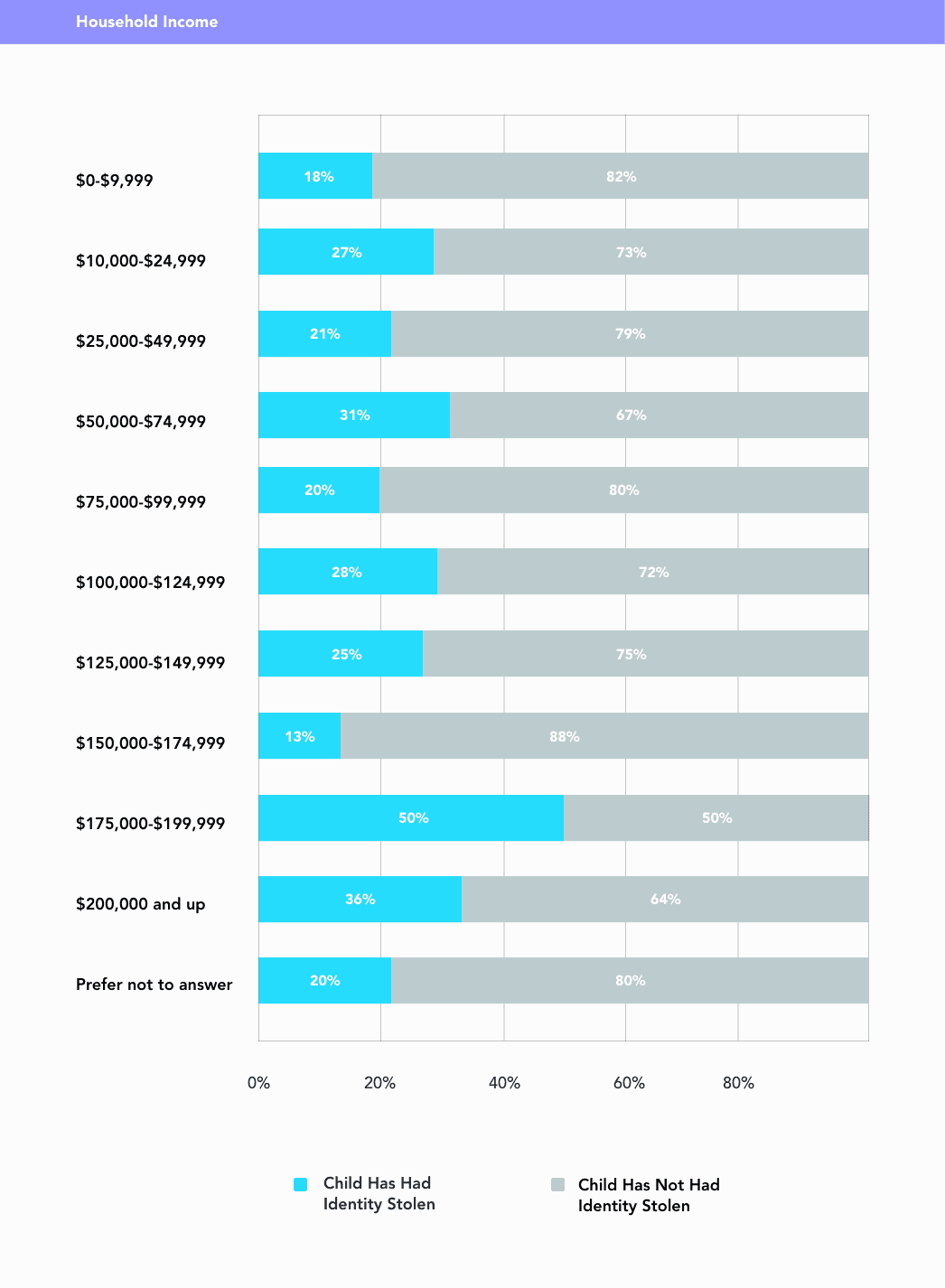 Oftentimes with child identity theft, the child in question doesn’t find out that their identity has been stolen until they are adults trying to apply for a loan or something of that nature. By that point, the thief could have used their Social Security number to get PayDay loans, file tax returns, and even get unemployment benefits in their name, which is why it’s best to look for warning signs early.

How To See If Your Child’s Identity Has Been Stolen

If you think your child’s identity has been stolen, you can check by reading their credit report from all three major bureaus: Transunion, Experian, and Equifax. Ask them for files relating to your child’s name and Social Security number to see if there are any changes you aren’t aware of; they could be a good indication of identity theft, according to the Federal Trade Commission.

The main consequence of child identity theft is financial losses. In 2017, the total losses from child identity fraud were $2.6 billion in the United States, which translated to $540 million in out-of-pocket costs for families. Your child could also experience difficulty getting loans, renting apartments, or doing any activity that requires a credit check. This could seriously delay or even impede them from taking out school loans, buying a mortgage, or even leasing a car.

That’s not to say that it’s impossible to recover from child identity theft. Once you find out that your child’s identity has been stolen, here’s how to recover it most efficiently:

Fortunately, there are a few steps you can take to dramatically reduce your child’s risk of identity theft, although it’s not 100 percent preventable. Adhere to the following best practices:

You protect your children 24/7, and their identities are a part of that. It’s a possibility that can result in financial losses and missed opportunities, so the best approach is to prevent it and look for warning signs to protect your child’s credentials. Believe us, they’ll be glad that you did, although they may not fully understand it for years to come. 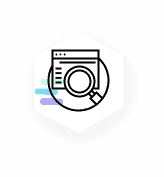