The number of American fraud victims has risen to more than 150 million,
up from 127 million in 2021.

The ease of credit and debit cards and their widespread acceptance by merchants means that the vast majority of payments today are made using something other than cash. In fact, according to the Federal Reserve Bank of San Francisco, about 51 percent of all retail transactions are done using credit or debit cards — only 26 percent are cash.

Here’s a look at our key findings:

According to our research, 65 percent of people with credit or debit cards have experienced credit card fraud at least once. This is an estimated 151 million U.S. adults, and also marks a considerable increase from our findings last year, which found about 58 percent of cardholders had been victims of fraud.

According to Hari Ravichandran, CEO and founder of digital safety company Aura, credit card fraud continues to increase because of how profitable it is for thieves. “Scammers follow the money and see immense value in credit card fraud and other schemes,” Ravichandran explained. As long as scammers can successfully commit and profit from this crime, it will continue to increase. 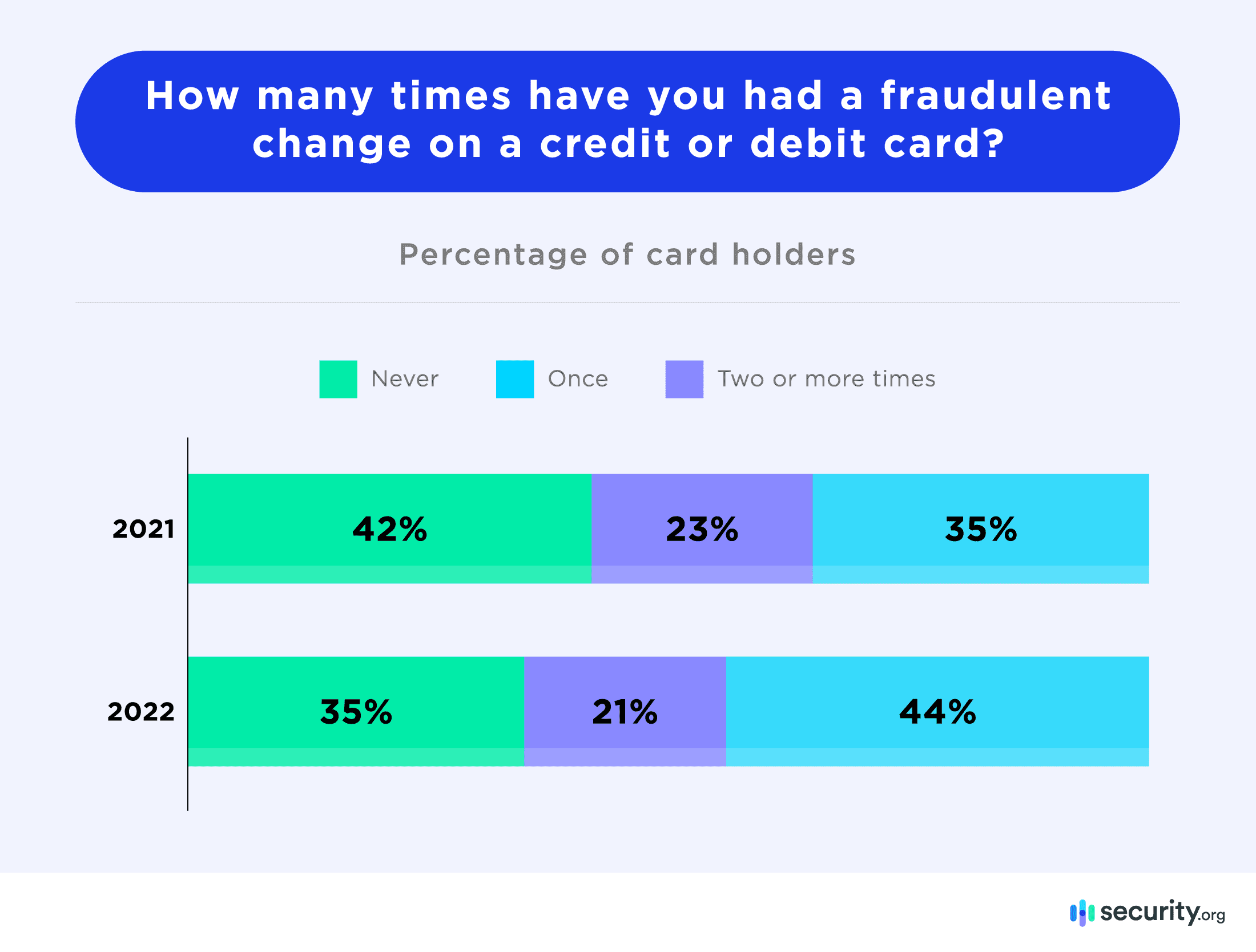 Another potential reason why card fraud is rising could be that people are shopping more online. As we’ll explore later, thieves usually don’t need a physical credit card to commit fraud. In other words, online shopping is a risk factor for credit and debit card fraud.

The Median Fraudulent Charge Has Increased by 27 Percent Since 2021

In 2021, the median fraud charge was $62, but this year, that figure has risen to $79, an increase of 27 percent. This increase could be due to a combination of high rates of inflation and the aforementioned rapid increase in online shopping. 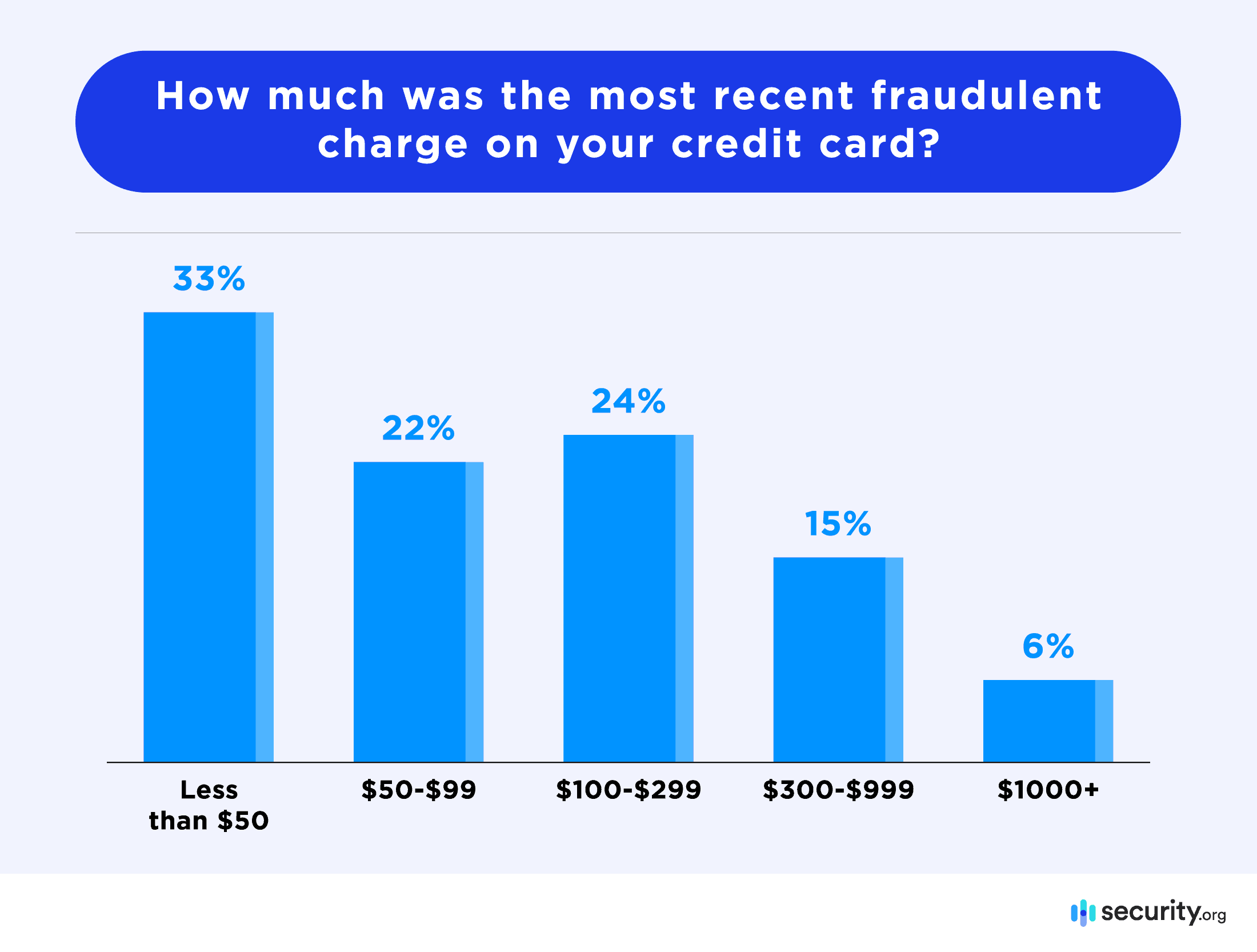 Our research didn’t indicate that reporting credit card fraud to law enforcement made you more likely to get your money back. Regardless of whether or not they reported the fraud to the authorities, most people did get their money back once they notified their banks. Twenty-eight percent of victims told us that their banks reversed the charges immediately, and only seven percent of people told us their cases were still open.

That said, credit card fraud is still a crime, and it is beneficial to report incidents of fraud. If everyone reported fraudulent charges to the Federal Trade Commission, authorities would have a much more complete picture of this crime in the U.S.

Since about two-thirds of all U.S. credit and debit card holders have been victims of fraud, it’s safe to say the average person is well aware that this crime exists. And although it’s increasing, our research shows that many people have poor security habits. However, many people are strengthening their online security.

We asked cardholders about ten security habits (five good and five bad ones). Across the board, bad habits have declined, with some falling significantly. However, good habits didn’t improve categorically.

Only 42 percent of people reported using public WiFi, compared to 55 percent last year. While public WiFi may not be the surefire cyber attack vector it once was, using an unsecured network is still dangerous, especially if your device stores financial information.

And in other good news, fewer people are using the same password for multiple accounts, as that figure dropped by 12 points. This is a wise safety measure to ensure that multiple accounts aren’t compromised in a single breach. 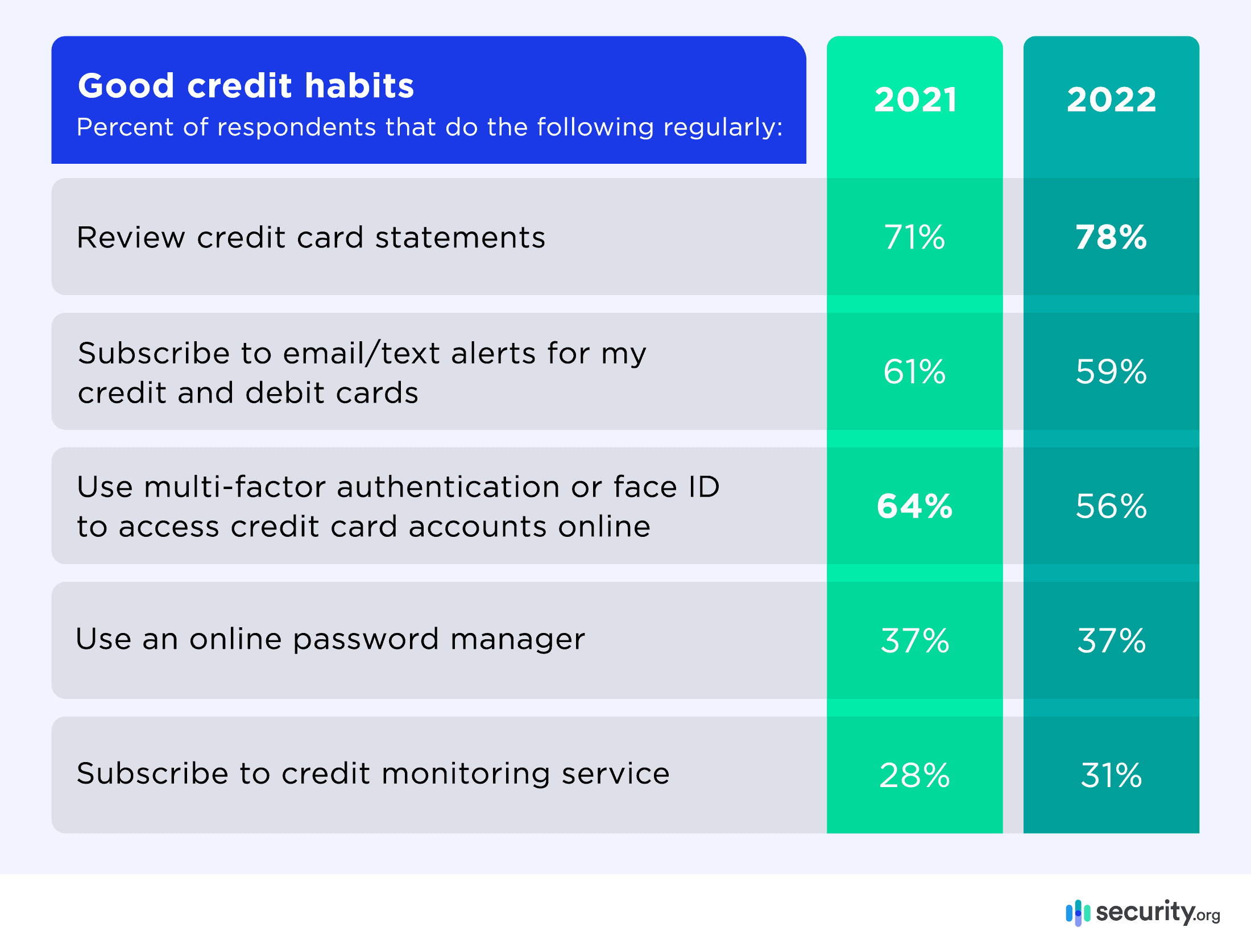 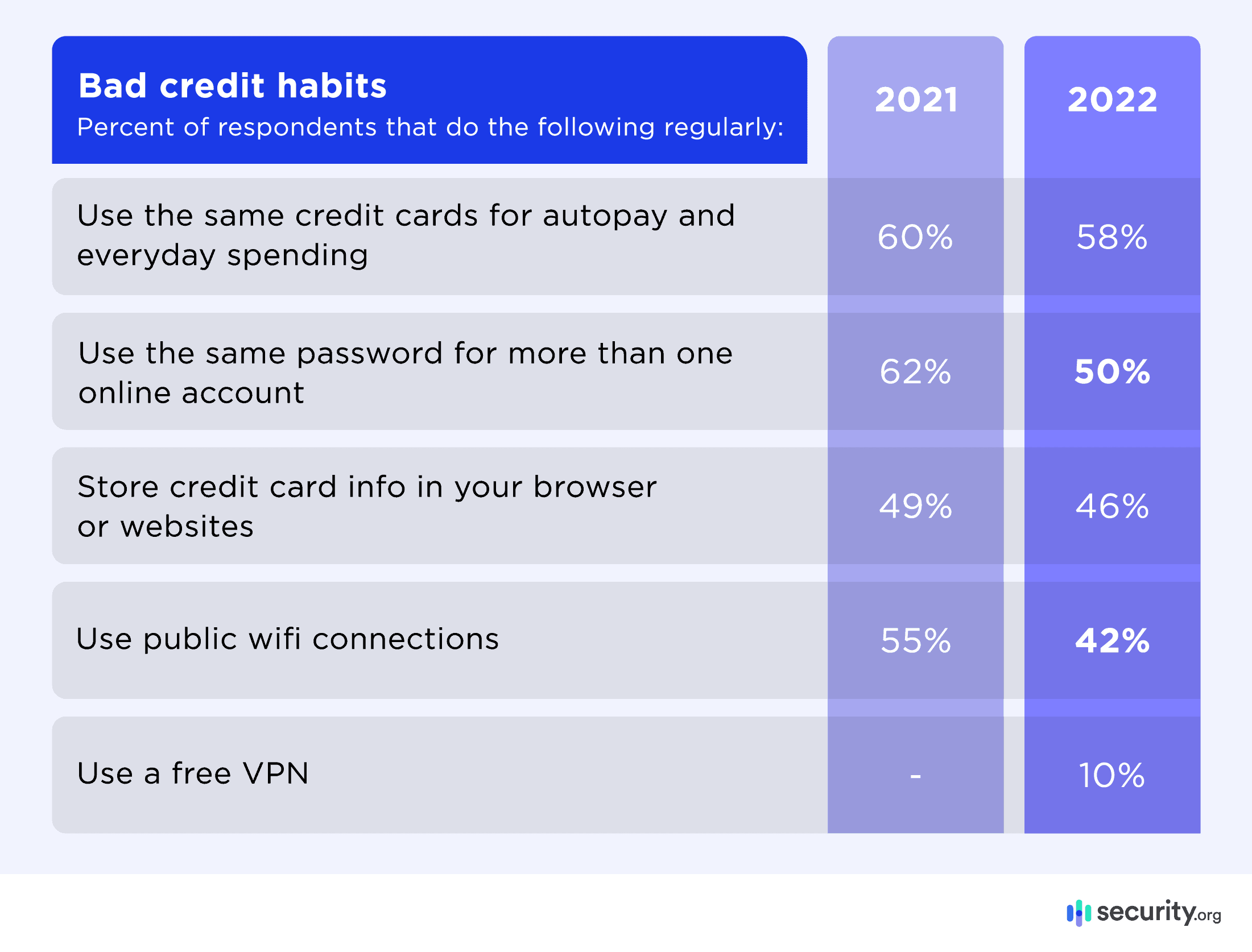 If you realize you have also developed a few bad credit habits, don’t panic. Nearly nine in ten people reported at least one bad habit, and almost two-thirds had two or more. But many people are learning from their past mistakes and preventing future fraud: those who had been fraud victims were more likely in 2022 to report good digital behavior. Victims were more likely to use multifactor authentication or facial recognition to access credit card accounts online.

However, certain bad habits were more common among previous fraud victims, including using the same card for everyday spending as they do for autopay accounts. This is risky because it means card numbers are stored in multiple places. Using the same card for autopay and everyday spending also creates more hassle for people if their card is stolen since they will have to update their information on every single autopay account.

Be aware of recurring fraud charges

Though it wasn’t as common as one-time fraudulent charges, 18 percent of all fraud victims said they’d noticed unauthorized recurring payments, meaning one from the same merchant that showed up monthly or yearly.

In many cases, recurring charges are connected to gas stations via skimming (more on that in a moment). Still, recent research has exposed a sophisticated scam involving a fake network of websites functional enough to look real and credit card numbers purchased on the dark web.

According to researchers, scammers schedule small, recurring charges similar to what consumers might pay for popular subscription services. They reason that an average person might not notice them at all.

The good news is that despite the sophistication of this particular scheme, consumers are more likely than they were in 2021 to review their credit card statements regularly. But remember that it’s important not just to give statements a cursory glance but to dig into each payment, especially from merchants you don’t recognize.

Of course, even payments to merchants you do recognize can be dangerous. Gas pumps are notorious locations for scammers to place credit card skimmers, which are designed to look like regular credit card readers. How can you tell the difference?

Adult sites and gaming sites were other popular sources of fraudulent transactions, likely due to their popularity — according to one estimate, adult websites account for 13 percent of all websites on the internet.

Regularly reviewing your credit card statements is helpful, but getting alerts in real-time is even better, as it’s often possible to stop the payment before it is fully processed. Overall, about 59 percent of cardholders told us they had alerts enabled. Credit card providers can often send alerts to your email or mobile phone if they detect suspicious transactions. You may also receive notifications with the details of every purchase made with your card. 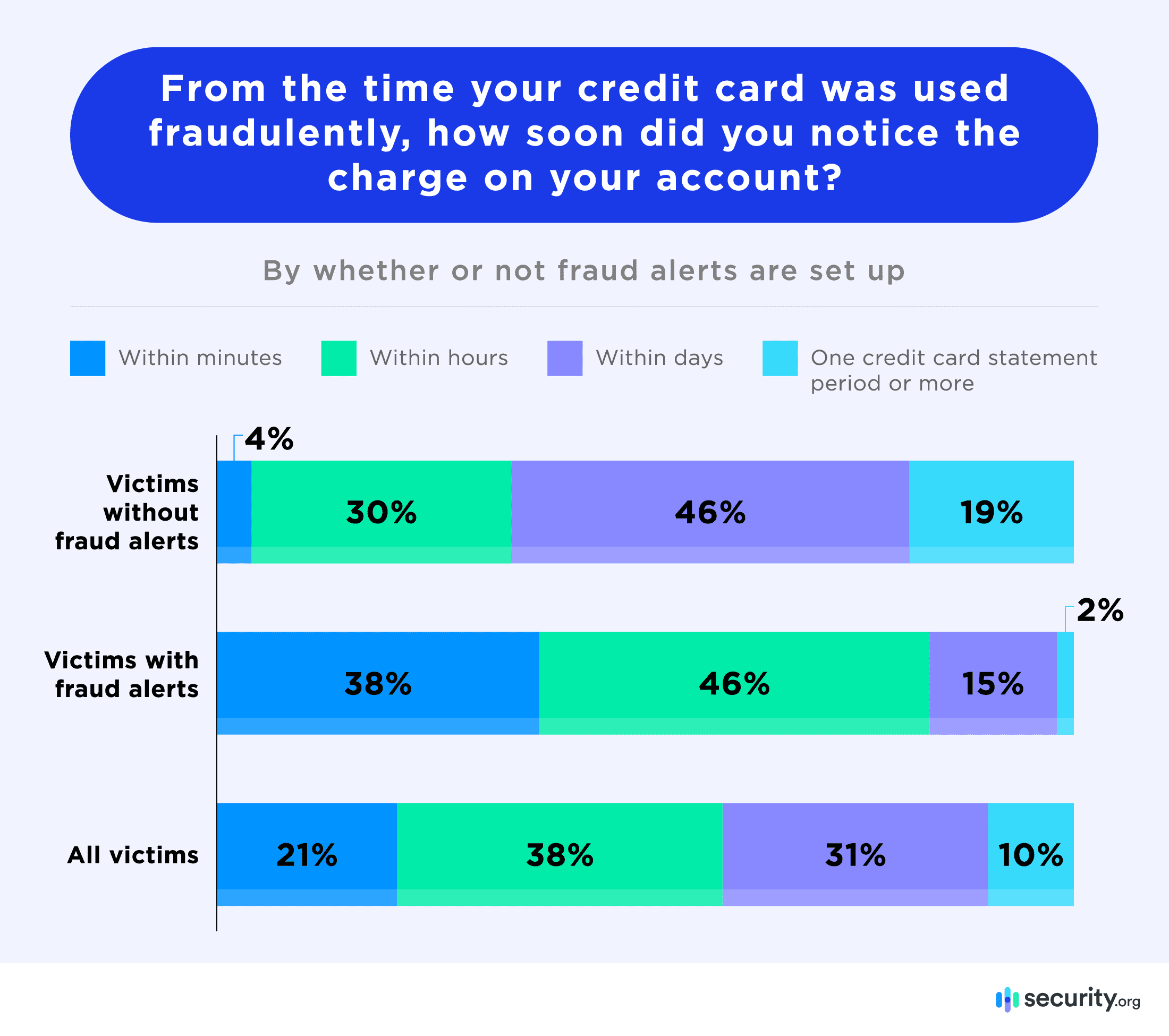 Among users who had credit alerts activated, 38 percent were notified of the attempted fraudulent transaction within minutes — compared to just four percent without notifications. Account notifications can empower you to take early action in case of fraud or even stop unauthorized transactions from being completed.

Our research indicates that while Americans are making some strides, the average consumer has some work to do regarding the security of their credit and debit card accounts. As scammers become increasingly skilled and sophisticated with their schemes, individuals will need to improve their digital security.

As our data revealed, credit card fraud is an increasingly profitable crime, and it has evolved with technological advances. Credit card holders can protect themselves by staying vigilant online, locking down their personal information, and fighting back against scammers with technology.

In November 2022, we conducted an online poll of 1,003 U.S. adults about their credit and debit card habits, including whether fraudulent charge attempts had ever impacted their accounts. All study participants had at least one debit or credit card.  Thirty-one percent were aged 18-29, 44 percent were 30-44, 17 percent were 45-60, and six percent were 61 or older. Fifty percent were male, and 50 percent were female.