Guide to Chatbot Scams and Security: How to Protect Your Information Online and at Home

The realistic nature of automated chat features and devices may make people comfortable sharing their personal information. However, criminals often use these popular technologies in phishing schemes.

People adore chatbots because of their efficiency, convenience, and 24/7 availability. Thanks to highly advanced programming, chatbots can respond nearly as well as human agents to angry, happy, or confused folks. Customers also like asking chatbots questions they may feel uncomfortable sharing with real humans.

Automated chatbots have various uses today: ordering pizza, checking bank account balances, or mental health therapy. Even Siri is a type of chatbot. So is Amazon’s Alexa. Their popularity, which skyrocketed during the pandemic, is expected to continue to grow over the next few years. Since chatbots can help businesses engage their website visitors and increase their online purchases, the market size for chatbots is predicted to increase 25 percent year over year until 2028.

As businesses find more applications for chatbots, bad actors are also finding new ways to exploit chatbot users and steal their personal information. And unfortunately, most people are not aware of this threat. According to our recent study, 58 percent of adults said they didn’t know chatbots could be manipulated to gain access to personal information.

This guide will help you use chatbots safely and securely and show you how to spot a scammy chat before you share sensitive information.

Although they benefit businesses and customers, there are certain risks and vulnerabilities to be aware of when using chat features on websites. Most people are not confident that these online chats are completely secure. In fact, only 11 percent were very or extremely confident that companies had sufficiently secured these chat features. 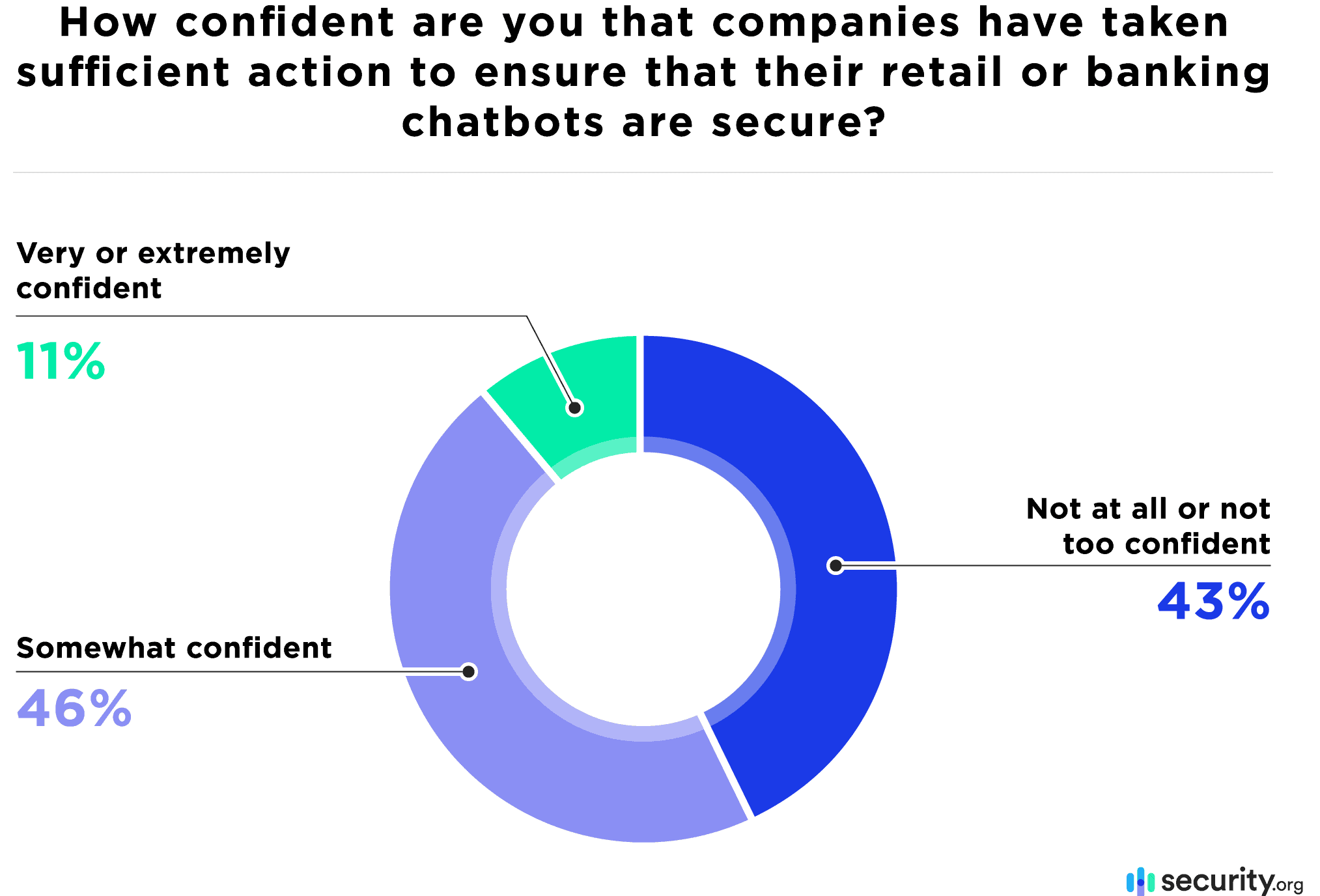 If customers would not feel safe placing an order with their credit card number over public WiFi networks, they should not when ordering through a chatbot, either. According to our research, people seemed to be more concerned about their information security in online banking chats than in online retailers’ chats. This makes sense, given the sensitive information associated with bank accounts that could be damaging if placed in the wrong hands. 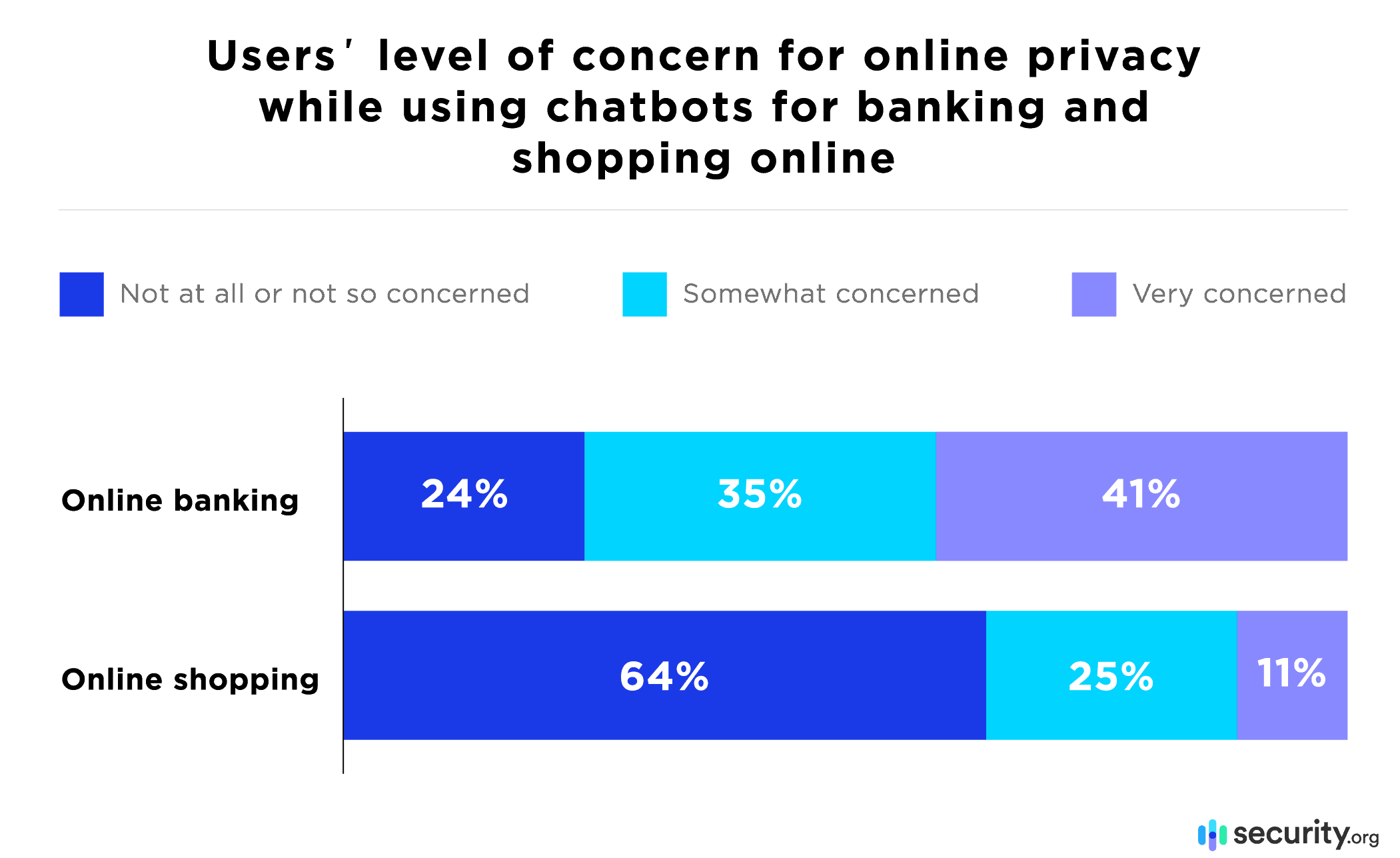 However, even in retail shopping chats, criminals could access victims’ credit card information if a company has a data breach. If credit card or other personal data was shared and stored in automated chats, hackers could steal and manipulate it. No matter what chatbot you use, it’s essential to be vigilant and protective of your personal information.

Chatbot scammers often impersonate trustworthy brands when planning their schemes. According to Kaspersky Labs research, major brands like Apple, Amazon, and eBay are the ones that phishers impersonate most often.  Here are a few examples of chatbot scams where bad actors pretend to represent major companies to obtain sensitive information from victims.

DHL is a courier, package delivery, and express mail service company. In May 2022, a chatbot phishing scam spread – but it did not start in chatbot form. Essentially, the scammers asked unsuspecting people to pay additional shipping costs to receive packages. Victims had to share their credit card information to pay the shipping charge. 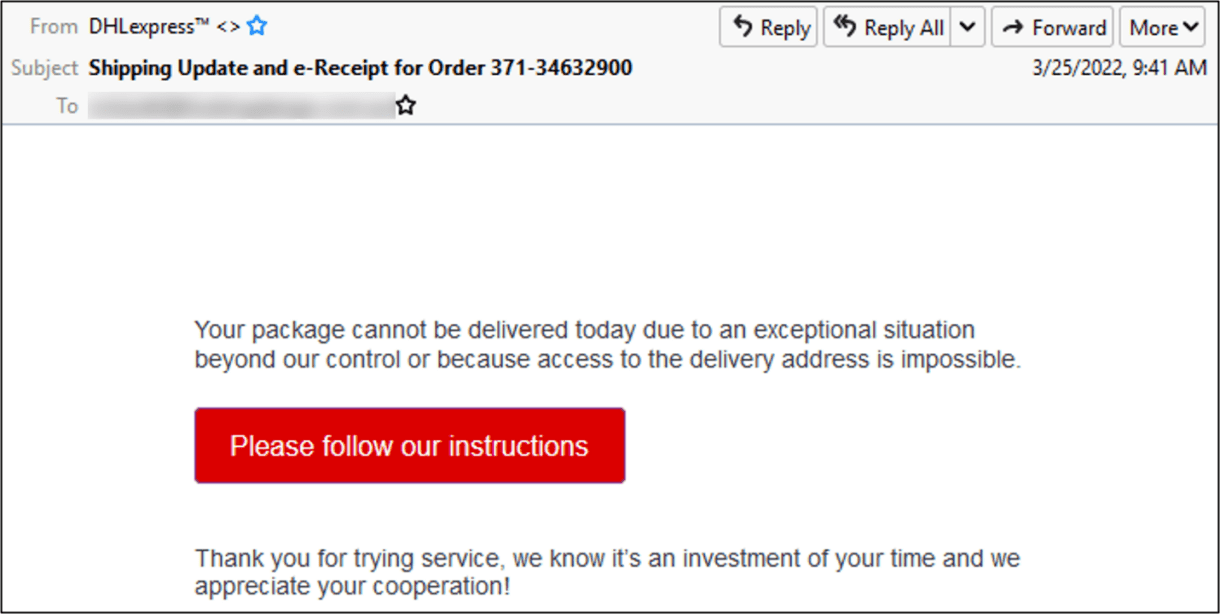 First, the victims received an email about DHL package delivery problems. If they clicked on the email link, they were eventually directed to a chatbot. The chatbot conversation may have seemed trustworthy to some users since it included a captcha form, email and password prompts, and even a photo of a damaged package. However, there were a few tell-tale signs that this was a scam:

Meta’s Messenger and Facebook have also been targeted in a chatbot scam. Some Facebook users received a fraudulent email explaining that their page violated community standards. Their Facebook account would be automatically deleted if they didn’t appeal the decision within 48 hours.

There were a few clear signs that this was a scam:

How to stay safe while using chatbots

Whether online or in your home, chatbots can be hugely valuable and are typically very safe. A few telltale signs may indicate a scammy chatbot is targeting you.

Here are a few ways to stay safe and spot fraudulent chats while on the internet:

If you receive frequent texts from unknown numbers that contain suspicious links,  you can adjust your carrier settings to filter out spam calls and texts. You can also download mobile apps to block shady numbers and texts. Forward any scam text messages you receive to the Federal Trade Commission (FTC) at 7726, so they can track and investigate the fraud.

More than half of respondents (52 percent) own an AI assistant, meaning that 120 million Americans share personal information with such devices regularly. Amazon’s Alexa is the most popular model today.

Home assistants offer convenience by handling household operations with an understanding of our personal needs and preferences. That functionality also makes the interfaces a risk to privacy and security. Appropriately, not everyone trusts them.

More than 90 percent of users have doubts about home assistant security, and less than half have any level of confidence in them. 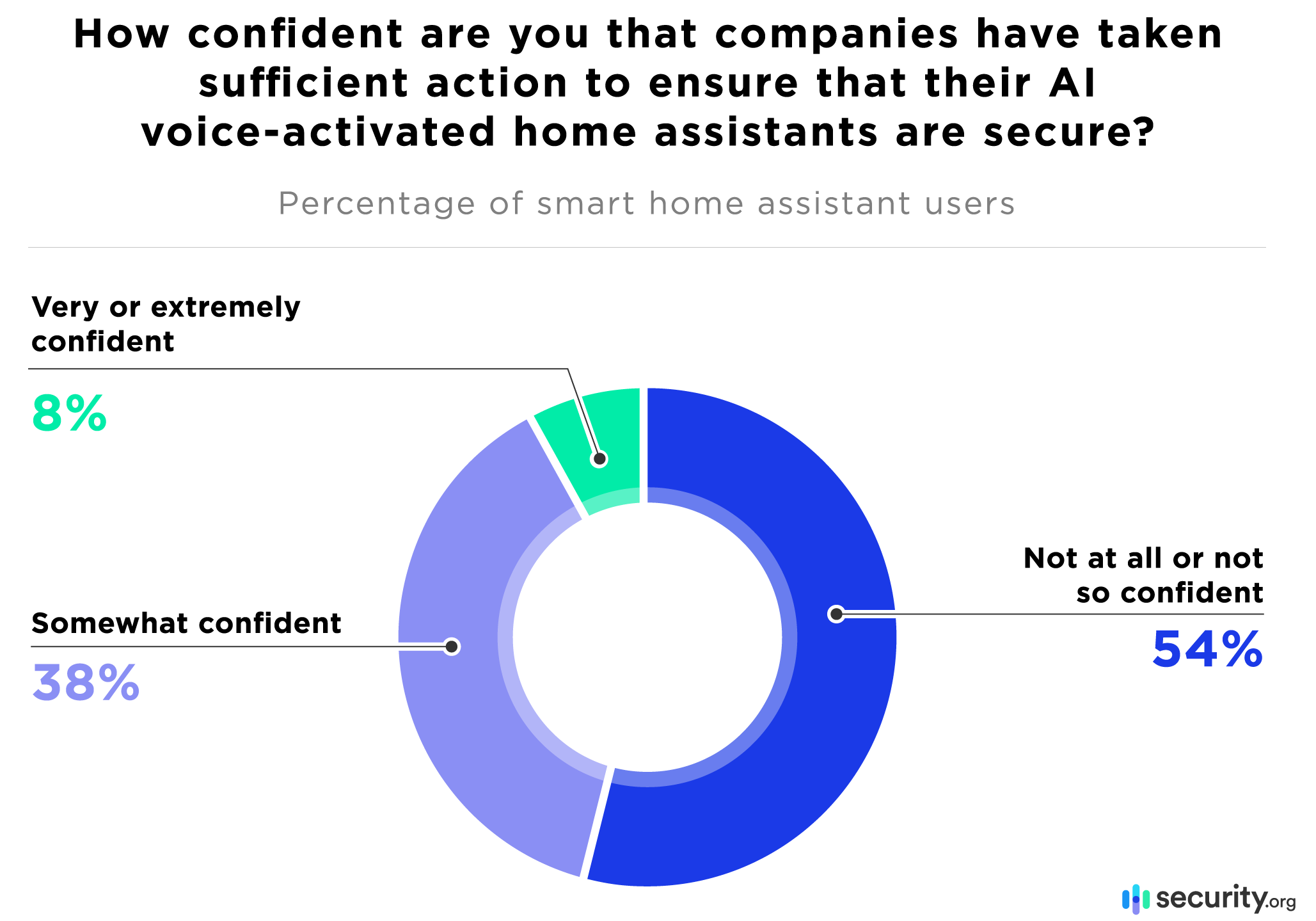 This skepticism is justified. Voice-activated assistants lack many protocols that can foil a browser-linked scambot. Rather than requesting password logins through verifiable web pages, assistants can accept commands from anyone without visual confirmation of their remote connections. This process allows for fraud on either end of the equation. Including always-on microphones completes a recipe for potential disaster.

Some VPA security lapses are borderline comical, like when children commandeer them to buy toys with parental credit cards. Other stories feel far more nefarious. For instance, Amazon admits to listening in on Alexa conversations even as Google and Apple face litigation for similar practices.

Third-party hacks are particularly frightening since virtual assistants often have access to personal accounts and may be connected to household controls (lighting, heating, locks, and more).

Outside breaches of AI assistants usually fall into one of the following categories:

Manufacturers issue updates to address security flaws, but when personal assistant divisions like Alexa lose billions of dollars, such support is likely to be slashed. Luckily, there are simple steps that consumers can take to help safeguard their devices.

Additionally, one must remember to follow the baseline safety protocols inherent with any online device. Some consider VAs family members rather than gadgets, yet it’s still critical to keep firmware updated, use strong passwords, and connect them only to secured personal routers.

Conclusion: What you should never share with chat bots

Most of the time, chatbots are legitimate and as safe as any other apps or websites. Security measures like encryption, data redaction, multi-factor authentication, and cookies keep information secure on chatbots. If you accidentally give a legitimate chatbot your Social Security number or date of birth, redaction features can automatically erase the data from the transcript.

That said, you should tread carefully when sending personally identifiable information and other types of sensitive data. Sometimes, sending PII is unavoidable since interacting with a chatbot is similar to logging into an account and submitting PII yourself. Here are some personal data points you should not send via chatbot:

At a minimum, do not overshare information. Refrain from sending or volunteering extra information beyond what is required. For instance, don’t give your complete address if the chatbot asks only for your ZIP code. Never share information you would ordinarily not need to, and think carefully before sending any personal information online.  For example, you would never have to share your Social Security number to check on a package delivery or get your bank balance.