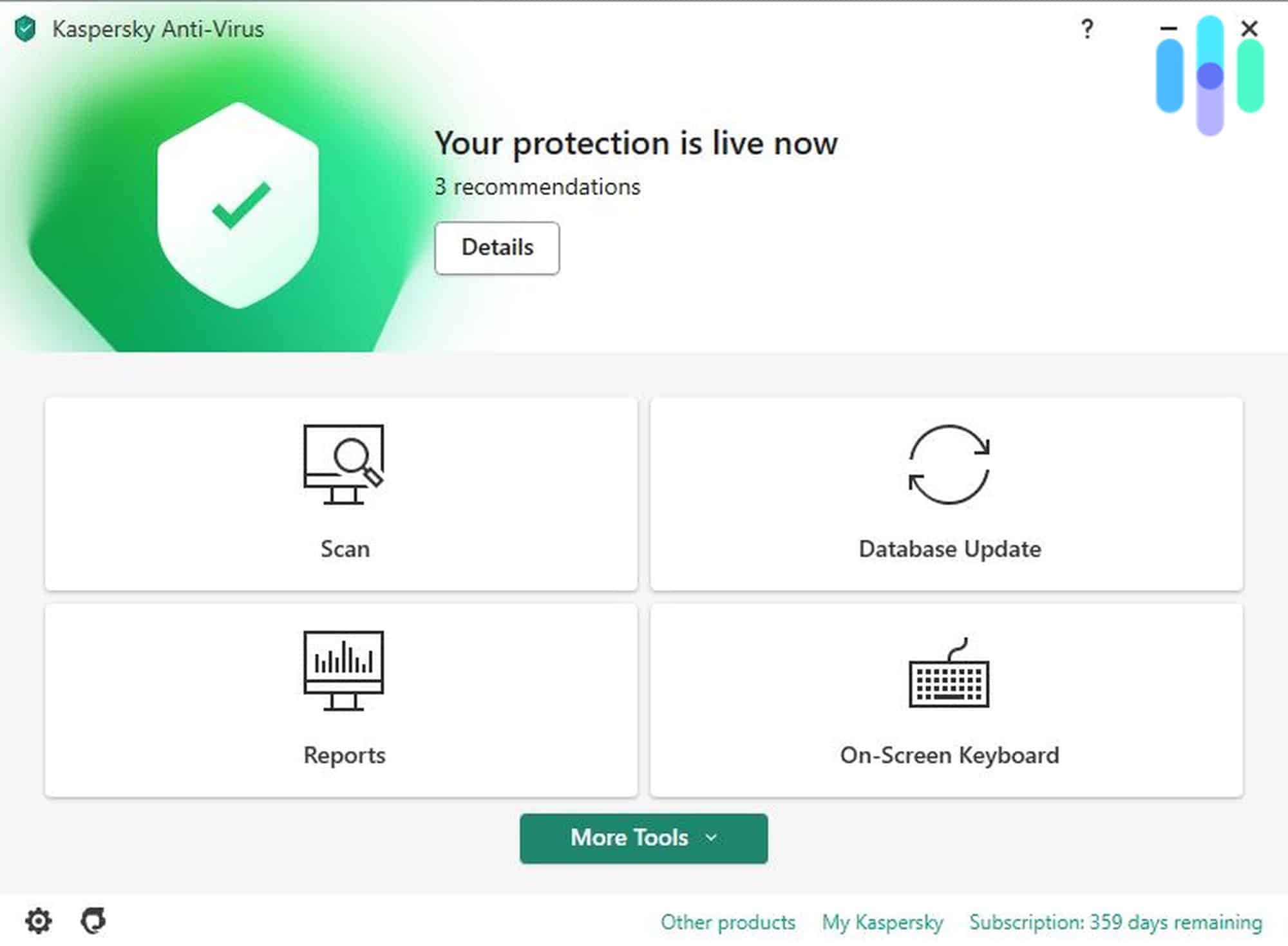 Kaspersky recently began pulling its VPN service out of Russia. As of November 15, 2022, the free version of the VPN has stopped working for anyone in Russia. In addition, all premium VPN users in Russia will lose access by December 2023, and new subscribers can only purchase subscriptions until December 2022. A one-year subscription is the longest subscription option available to them. Other than the VPN, all other Kaspersky services will continue to work in Russia.

Protecting your devices from malware doesn’t always come free. Oftentimes, you’ll need to pay for antivirus software to get the best protections. However, there are such options, such as Kaspersky, that provide high-level protection at no cost.

On this page, we’ll discuss Kaspersky’s free antivirus options, as well as the paid subscriptions to help you decide if it’s the right antivirus software for your malware protection needs.

When Kaspersky is on the hunt, it leaves no stone unturned. In our antivirus tests, Kaspersky was one of the only two software that detected all five of the viruses we hid on our computer. That includes viruses pretending to be something else (like a Word document) and viruses hidden inside archived folders. The bottom line is that Kaspersky hunts for viruses like a bloodhound.

Detected 99.9 to 100 Percent of Android Malware

Unlike our virus detection test, the folks over at AV Test used a much larger sample size to test Kaspersky. They used hundreds of thousands of malware in their most recent test. Nonetheless, they came to the same conclusion as us that Kaspersky is great at detecting malware. Specifically, they found that it’s capable of detecting 100-percent of the latest and most prevalent Android, Mac, and Windows malware.

As previously mentioned, Kaspersky offers free antivirus software. And not to spoil anything for you, but even with the free software, Kaspersky is still great at detecting viruses. Keep reading to find out why.

On the Google Play store, the Kaspersky Mobile Antivirus: AppLock & Web Security app has a 4.8, while the Kaspersky Security Cloud & VPN has a 4.7 on the Apple store.

Commitment pays! We unlocked lower prices when we signed up for long periods of time.

The Kaspersky Security Cloud – Free is one of the best free antivirus we’ve ever tested, and that’s because it uses the same virus detection database as Kaspersky’s premium antivirus. Yes, that same database that was able to catch all five of the viruses we hid during our tests. Although it lacks the bells and whistles included in its premium counterparts (VPNs, password managers, parental controls, etc.), the free antivirus from Kaspersky is a viable solution.

That being said, we encourage you to check out the premium Kaspersky products, as well. They have really useful additions plus user-experience upgrades that will make malware protection a whole lot easier.

Note: Kaspersky’s free antivirus app does not work on macOS devices. Rather, you’ll need to choose either an Kaspersky Plus or a Kaspersky Premium plan to cover your Macbook.

Kaspersky bundles its antivirus service with other digital protections like VPNs, firewalls, payment protection, and more. They also offer a number of add-on products for personal use, which we’ll cover below, as well as antivirus for business, which we won’t get into. First, let’s start with those package options.

Standard vs. Plus vs. Premium

Essentially, Kaspersky has four plans to choose from that include antivirus software plus a bunch of other services. Kaspersky Premium provides the most protection, but there’s nothing wrong with signing up for their free service to test it out before diving in fully. You can protect anywhere from one to five devices for one, two or three years, with more savings as the term length increases.

In addition to the four bundles above, Kaspersky has what they call a Security Cloud, which is a cloud-based solution that combines all of their apps into one package. It comes in Personal (for personal use) and Plus (for commercial use) variants, but here, we’ll focus on Security Cloud Personal. The package includes:

There’s no doubt that the Security Cloud offers the most protection of any packages on this list, making it one of the best digital security products for families.

If you want to buy a VPN separately, that’s also an option, although Kaspersky’s VPN only covers five devices maximum. Many VPNs cover unlimited devices, so this deal won’t be for everybody, especially considering that the average adult in America has more than 10 IoT devices in their own homes.1

FYI: We haven’t reviewed Kaspersky’s VPN Secure, but we have reviewed a different VPN called VPNSecure; don’t get the two mixed up!

There are a ton of risks for kids online, from child identity theft to general inappropriate content. We love that Kaspersky has a free app that lets parents control what online content their kids are seeing, and we think that this is sufficient, as many of the features in Premium, like child locator and Youtube search history, can be obtained in other ways for free, like through their phones’ GPS or in your browser’s search history.

Student Discounts: How To Save

Want an extra 10 percent off of anything on Kaspersky’s website, and we do mean anything? Just verify that you’re a student with UNiDAYS2 to unlock that discount. However, the student discount is only one of the several ways you can save with your antivirus purchase. If you’re not in a hurry, for example, you can wait for holidays to come around before shopping. Kaspersky often offers significant price-offs around Thanksgiving and especially on Cyber Monday.

Kaspersky accepts a number of payment methods, including Visa, Mastercard, and PayPal. Unfortunately, Discover and American Express cardholders won’t be able to use their cards, so the only option if you have those cards is to use PayPal.

In fact, we recommend paying through PayPal regardless of your credit card provider. PayPal is a safe payment processor, much safer than putting down your credit card information. Instead of seeing your payment information, websites you sign up with can only see your PayPal account, which significantly reduces the risk of your credit card being included in data breaches. At the same time, your bank or card provider won’t see what you purchased with your PayPal account. They’ll see that you used PayPal, but they won’t see what you used it for.

From the day you click purchase, you have 30 days to return any Kaspersky product for a full refund; simply look up your order3 and request a refund, and you’ll get reimbursed within five to seven business days. After that 30 days, you won’t be able to get reimbursed, though.

Want to learn more about the company behind the software? Kaspersky was founded in 1997 and now has more than 400 million users as well as 270,000 business clients. Clearly, they’re a very recognizable name in the cyber security industry, but the company is not without its hardships.

For example, in 2019, a German journalist found a security flaw in their antivirus software that would have allowed hackers to spy on users online.4 Since, the company has issued a patch, but this is more than a little disheartening for a company whose aim is to protect users against hackers, not expose them more. However, these sorts of vulnerabilities are incredibly common, so we can’t knock Kaspersky for something that literally all major tech companies have experienced.

The other biggest media story surrounding Kaspersky is its rumored ties to the Russian government, being a company founded in Russia. In fact, government computers are banned from using Kaspersky on their computers since 2017,5 but if you’re not concerned about Russian hacking, or you aren’t dealing with sensitive national security data, it shouldn’t be too big of a concern.

That does it for Kaspersky’s pricing! Overall, we think their rates are reasonable, and they offer comprehensive coverage for all of your digital security needs. We recommend buying packages rather than individual products to save money, and going with the longer term-length, if possible; but, if you don’t want to spend a dime, Kaspersky has a decent amount of free apps to offer, as well. Our advice? Spend as much or as little as you want with Kaspersky, or, for that matter, nothing at all!

We’re absolutely out of breath from telling you everything about Kaspersky’s pricing, but we’ll answer the questions we get the most for the cheap seats in the back.