An estimated 53 million adults own VR systems, and an additional 14 million could purchase over the next six months.

Long regarded as sci-fi aspiration, virtual reality (VR) has evolved into a viable platform for entertainment, communication, and education. Earlier versions targeted gamers and gadget-heads, but corporate backers like Facebook and Sony are now pushing VR into the mainstream.

Yet as Big Tech prominently promotes virtual reality as a portal to humanity’s future, people also have reservations about its safety and security. Our recent study reveals Americans’ experiences with this emerging technology and their concerns about its future.

Virtual Reality Market is Poised to Increase by Fall 2022

Thanks to expanded accessibility, more than half of U.S. adults (an estimated 140 million) have already experienced virtual reality, most likely through widely accessible headset-style devices. The most popular application has been VR gaming, but many have tried other activities, such as virtual “travel” or streaming TV and movies. 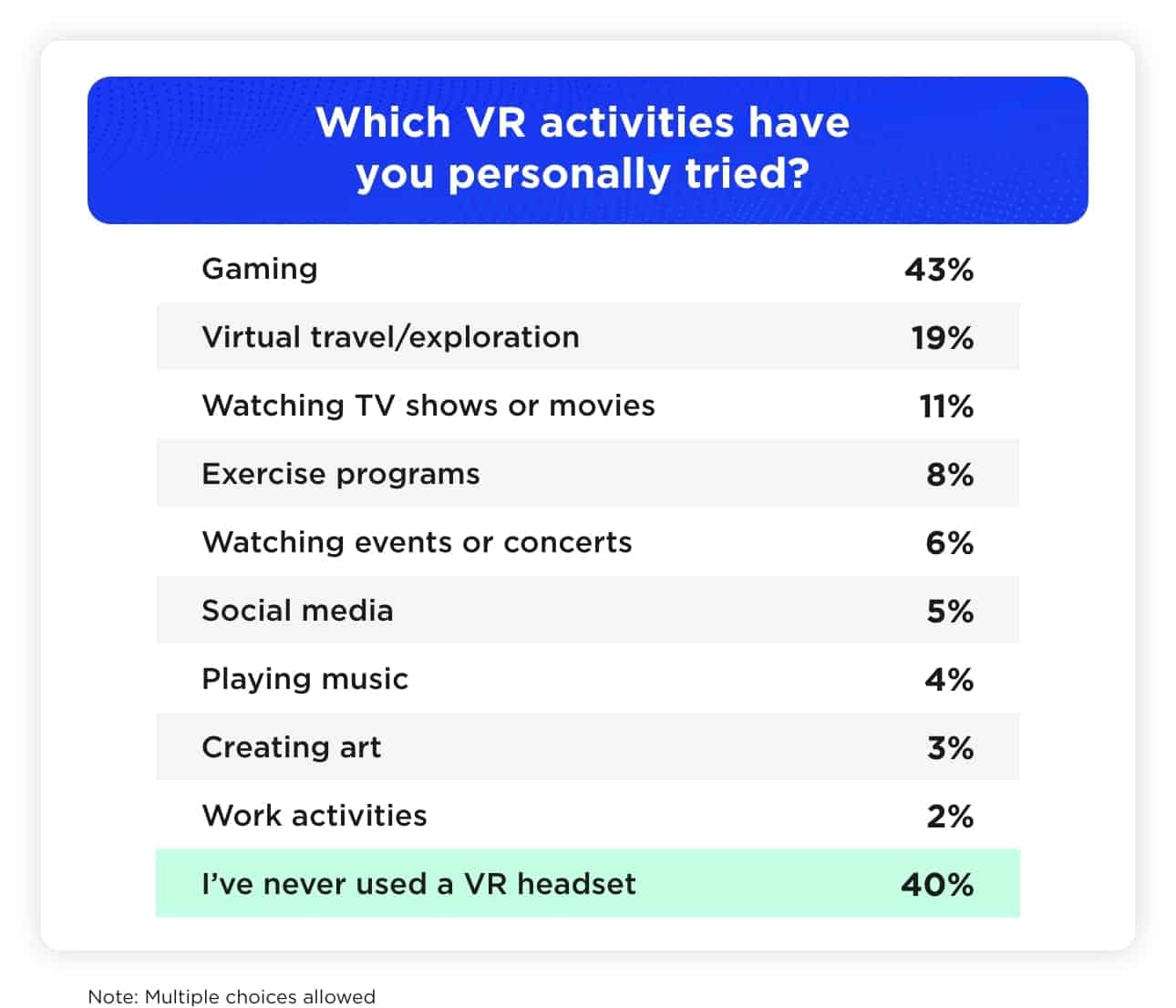 While a majority of adults have tried out the tech, 23 percent of Americans currently own a VR device. This is an estimated 53 million US adults.

According to our research, Facebook’s Oculus headset comprises nearly half of the market among current owners. In 2021 alone, Meta sold about 8.7 million Oculus devices, outpacing its competitors. 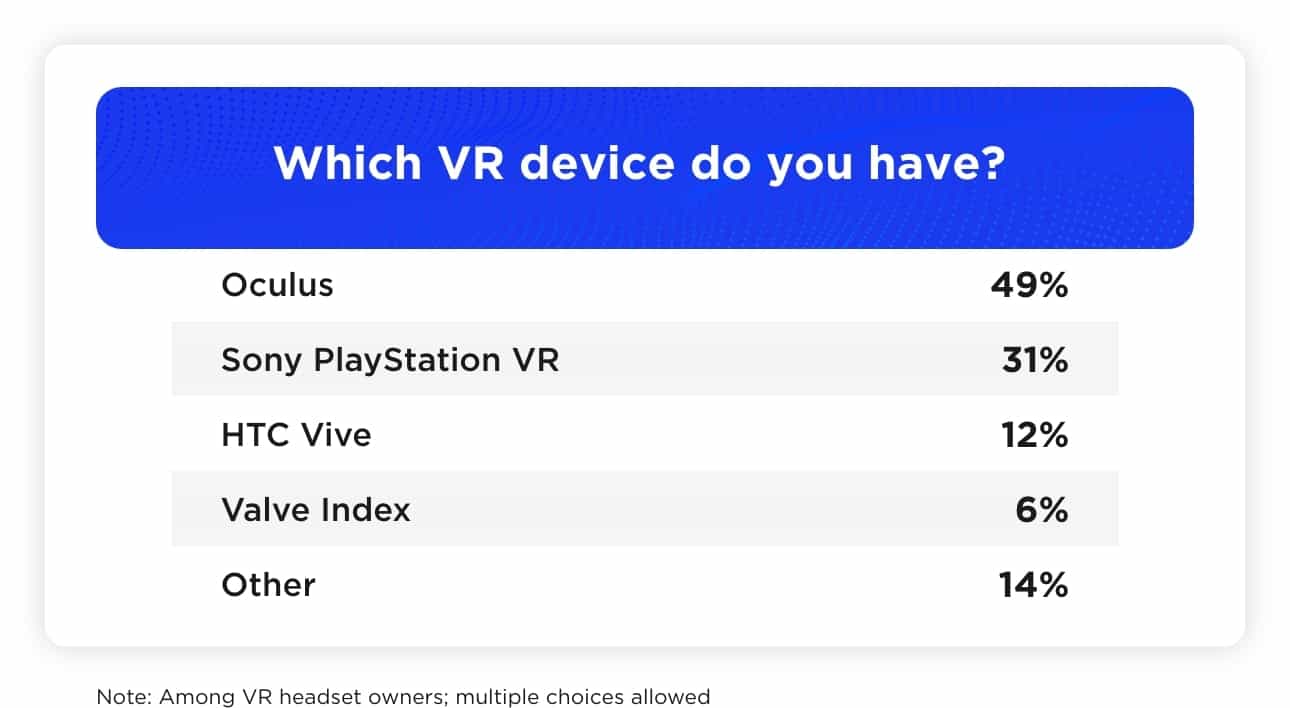 Even with consumer VR still in its infancy, headset owners are generally pleased with their purchases. Around 80 percent of owners were satisfied with the graphic quality of their devices, but just fewer were pleased with the selection of apps they could access through their devices. If developers can quickly churn out new games and features, current owners may be interested in expanding their use and a wider range of customers may be attracted to VR devices. 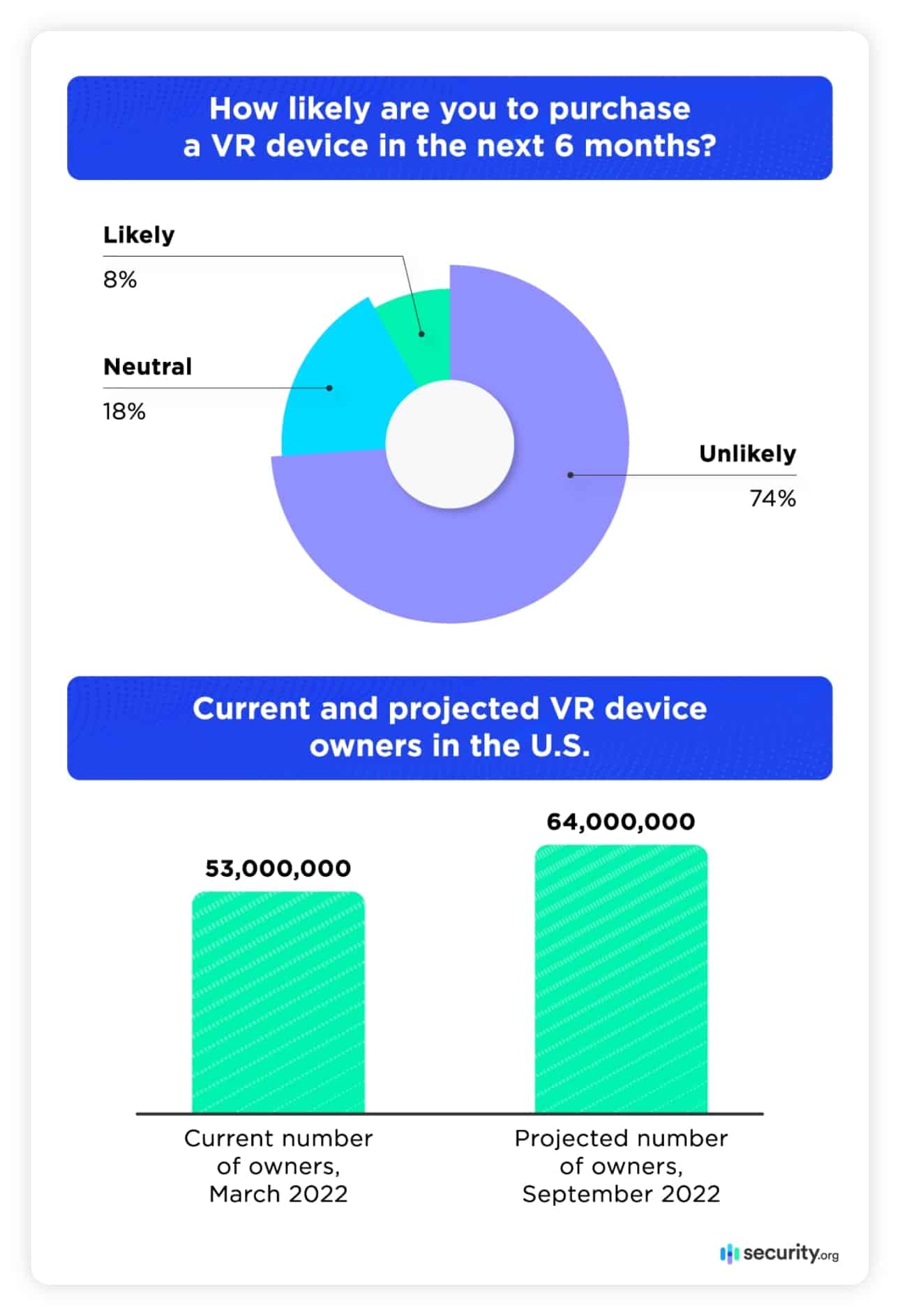 As interest in VR technology grows, adoption of personal VR devices is likely to continue to grow. Our research revealed that 8 percent of those without their own VR headsets are likely to buy one in the next six months. This could equate to 14 million new customers – a 21 percent growth in the market – in the same time period.

Despite the potential for rapid market growth, many consumers aren’t quite ready to jump on the VR bandwagon. Cost is the most common reason for not owning a VR headset. Personal VR devices range from less than $20 for a simple version to well over $1,000 for a high-end model. Despite the wide range of price points on the market today, some simply have no desire to own a device. Others have concerns about the potential effects of VR technology. 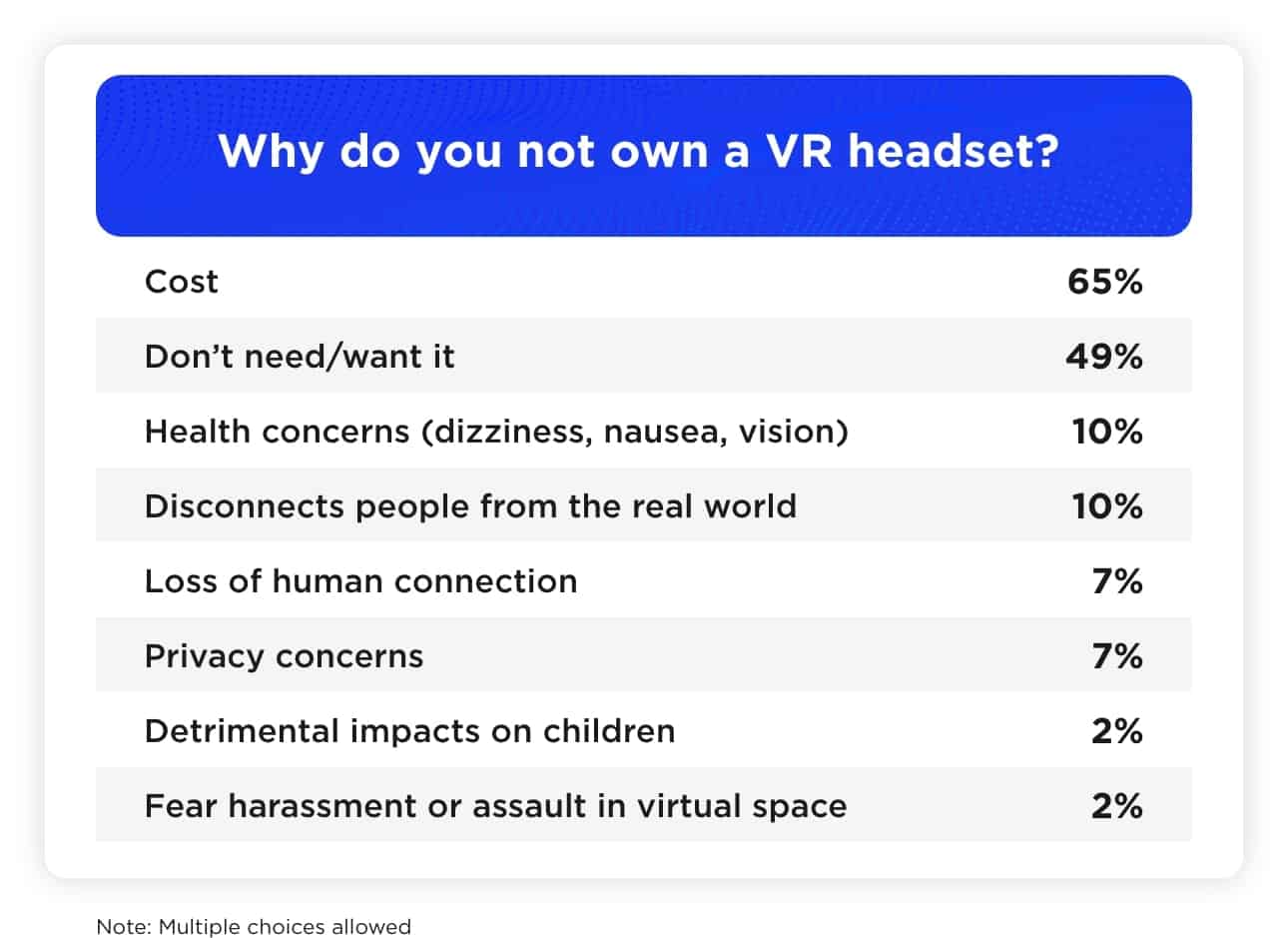 Some barriers to purchase might be surmountable with more education among consumers, increased security measures, and a greater offering of apps and activities. Among those without their own headsets, 71 percent indicated that some virtual reality experiences in their early stages of development could motivate them to buy a device.

Virtual history tours and space exploration are among the most enticing possibilities. 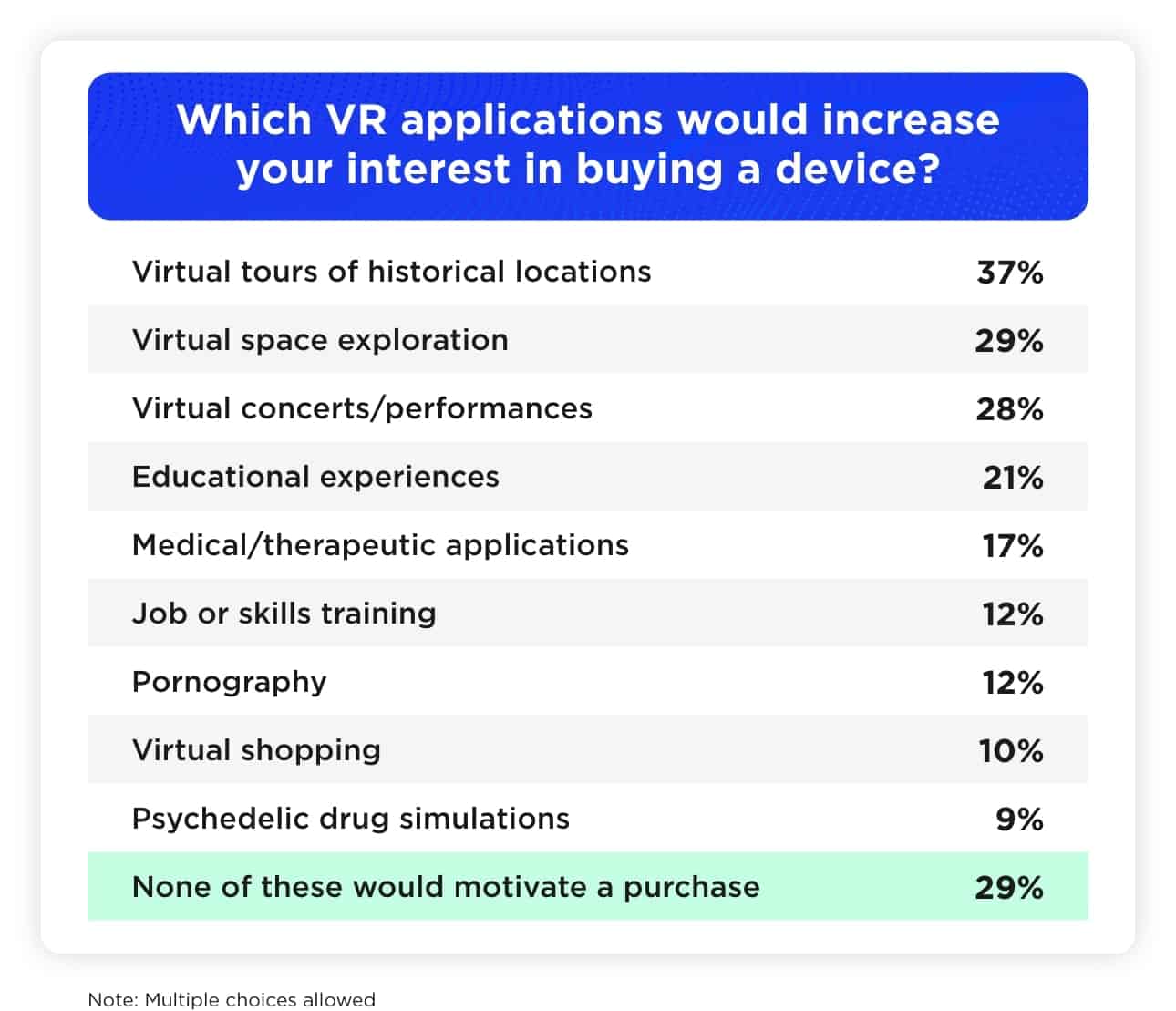 Despite Widespread Interest, Consumers Have Hesitations About VR Security

Advances in hardware, software, and low-latency 5G connectivity have allowed virtual reality to broaden its appeal and availability. With plans to expand well beyond gaming, VR will soon touch many areas of everyday life, and our study shows the public is curious.

While virtual reality’s potential appears limitless, the same may be said of its dangers. Beyond simple physical challenges like nausea and clumsiness lie real concerns about bullying, privacy, and neurological impairment – especially among younger users.

Even as respondents exhibited interest in VR possibilities, they expressed societal concerns. Americans are evenly divided about whether virtual reality’s impact will be positive or negative. 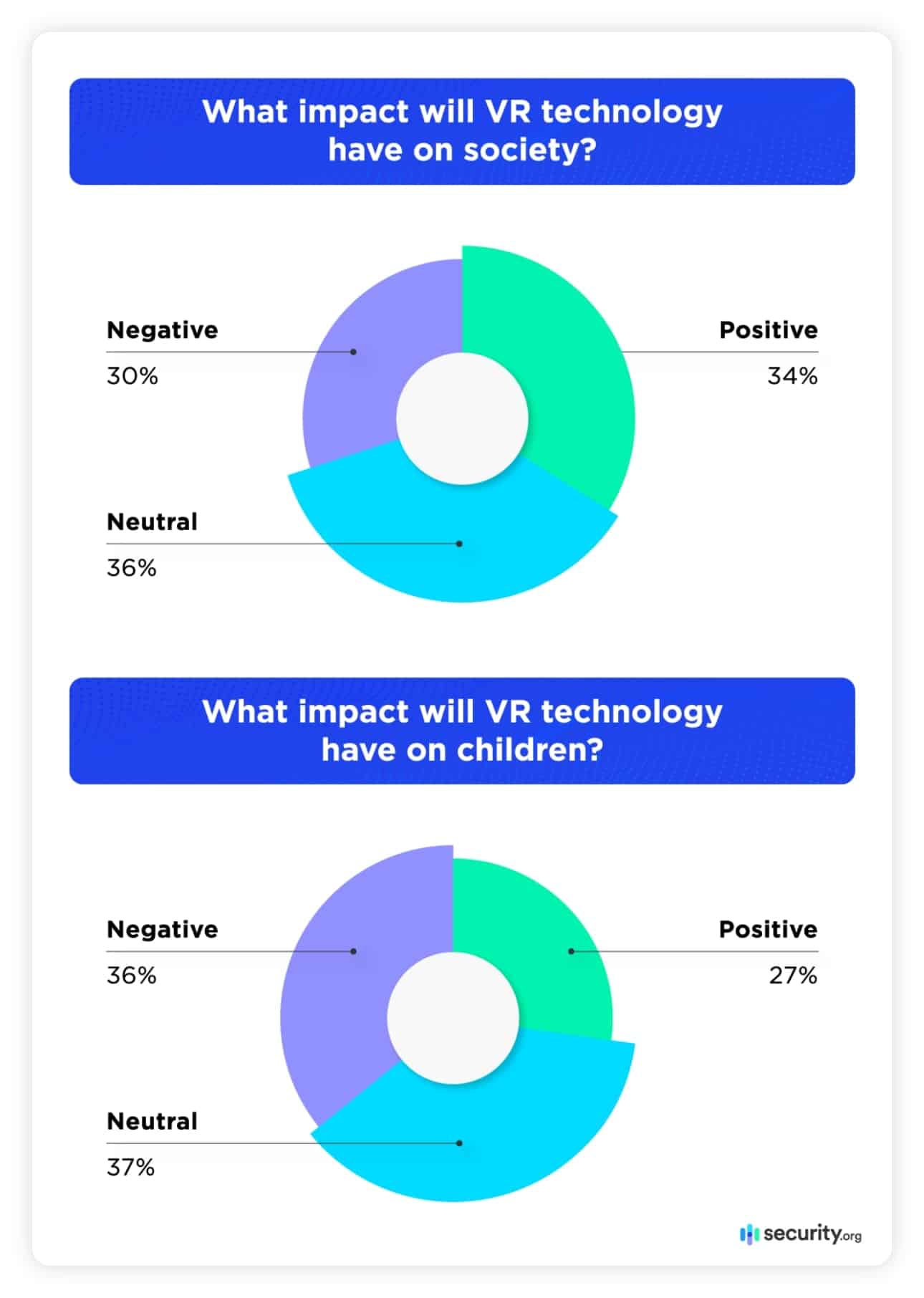 Americans were more concerned about the impact of VR technology on children. Overall, 36 percent believe VR use will negatively impact children’s development. Apprehension was strongest among the youngest generation in our study. Members of Generation Z (aged 18-25) showed far more concern about childhood repercussions than members of older generations.

In an age rife with malware, data breaches, and other cyber attacks, consumers are also worried about VR integrity and exchanging data in virtual spaces. Nearly one in five people were moderately or extremely concerned about the security and safety of the technology. 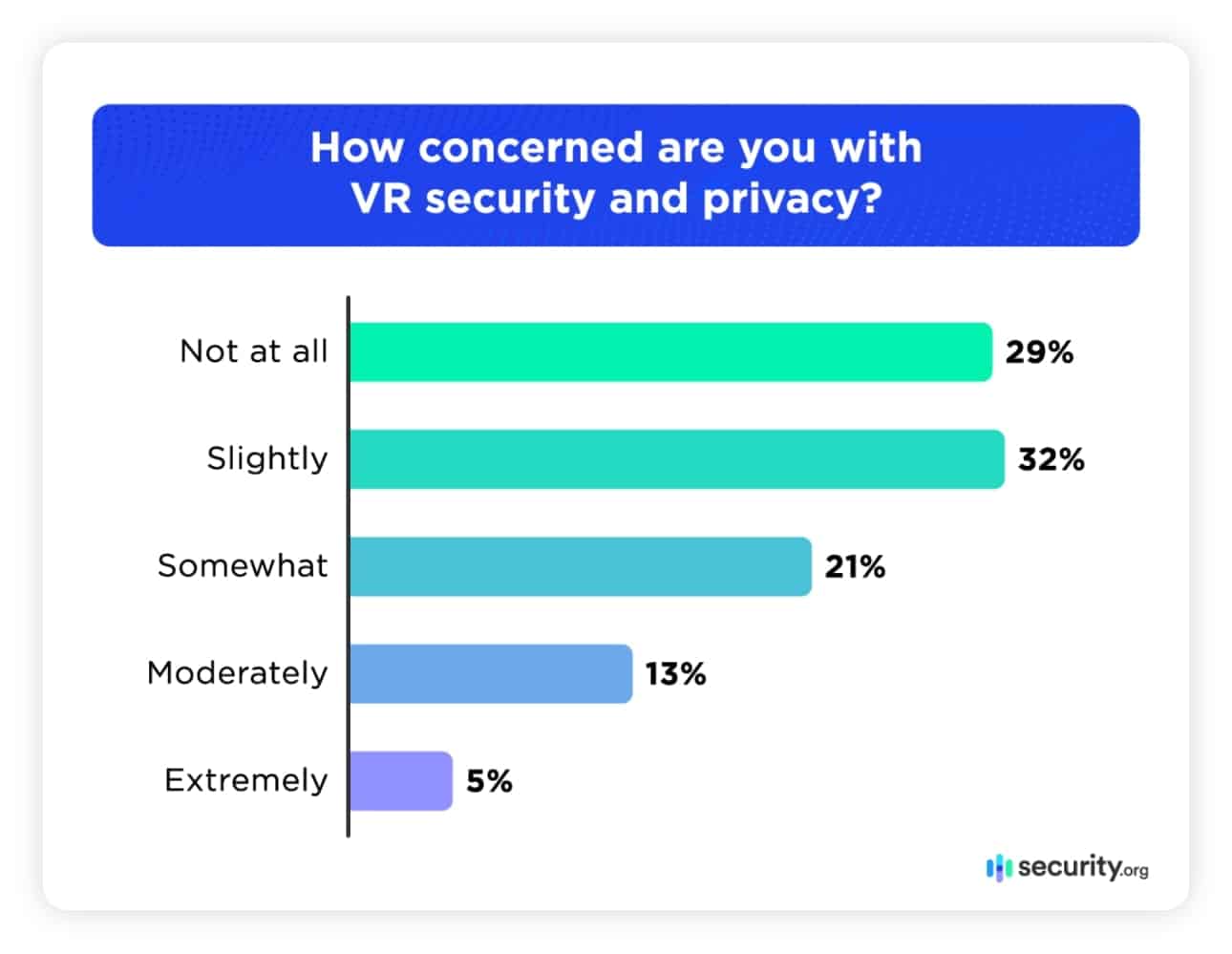 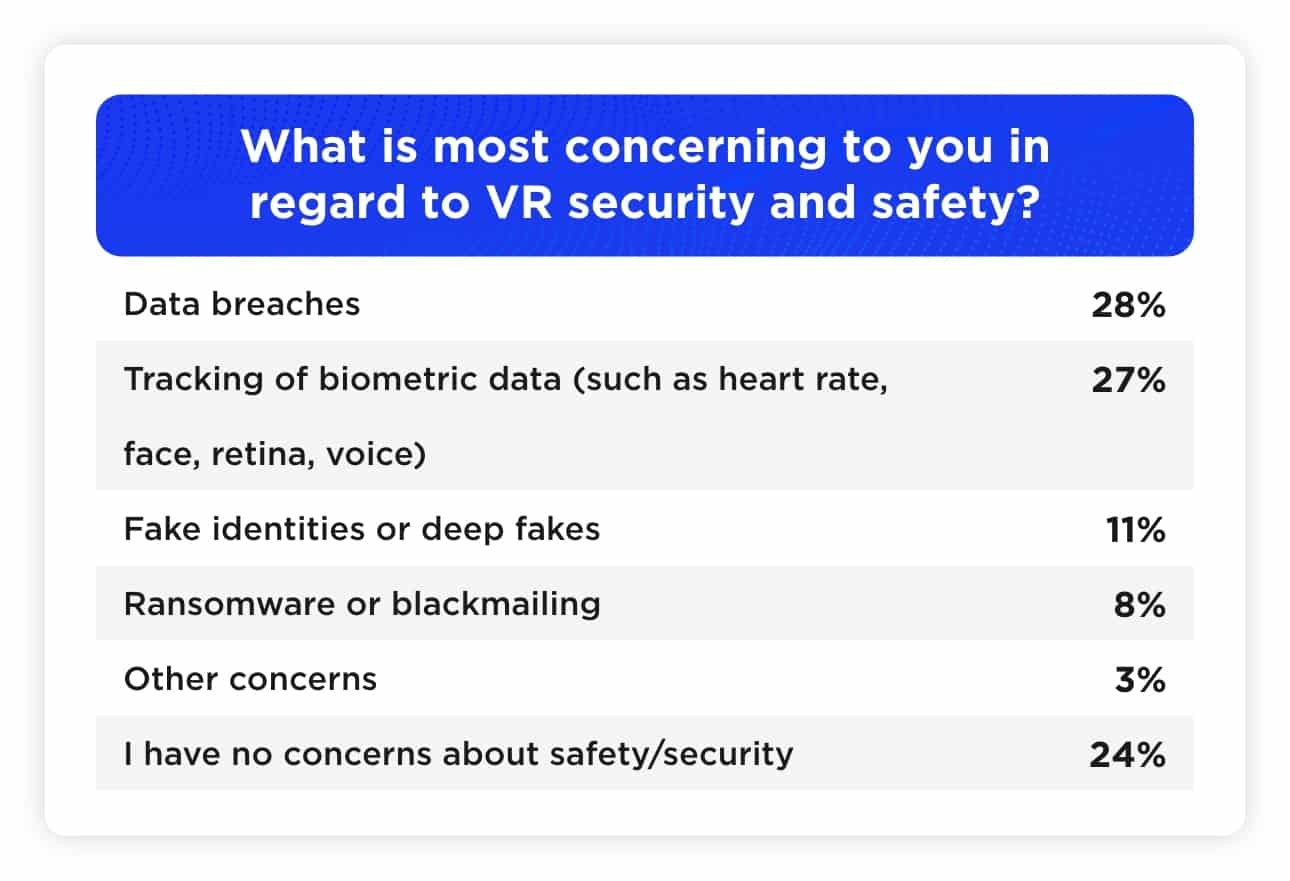 The most common worry was data breaches, followed closely by the tracking of biometric data. Since VR headsets are worn on the body, some people had concerns about the tracing of their heart rhythms, retinas, fingerprints, and other unique biological information.

In addition to problems related to society and security, virtual reality can inflict more personal, physical damage. Some have been injured due to crashing into real-world objects while lost in an alternate universe, and 62 percent of VR users have experienced nausea or dizziness while wearing a headset.

Safety and Security Tips for VR

There are basic precautions available to protect users from VR’s most obvious danger:

Ironically, the full fruition of VR has evaded reality across decades, but recent advances stand ready to align the technology with society’s high expectations.

Many Americans are interested in exploring virtual reality, but view current devices as unnecessary, expensive, and lacking a sufficient variety of applications. As more tech giants enter the field, prices should drop and offerings improve and we can expect the unleashing of marketing forces designed to drive consumer demand.

Factoring in the technology's impending commercial, medical, and occupational applications, it seems clear that virtual reality will soon be a regular part of our lives. To hear Mr. Zuckerberg wax poetic on the prospect, the metaverse will actually be our lives.

How warmly Americans welcome this transition may depend on expense, psychological safeguards, and the advancement of security precautions..

Security.org conducted an internet-based survey of 1,010 U.S. residents in March 2022. Participants’ genders, ages, and ethnicities/races were representative of the population of the U.S and user estimates were also based on the number of Americans with internet access in the U.S. from broadbandnow.com.