As Businesses Call Back Remote Workers, Package Theft Is on the Rise

Nearly 1 in 4 people have been porch pirate victims in the past three months. 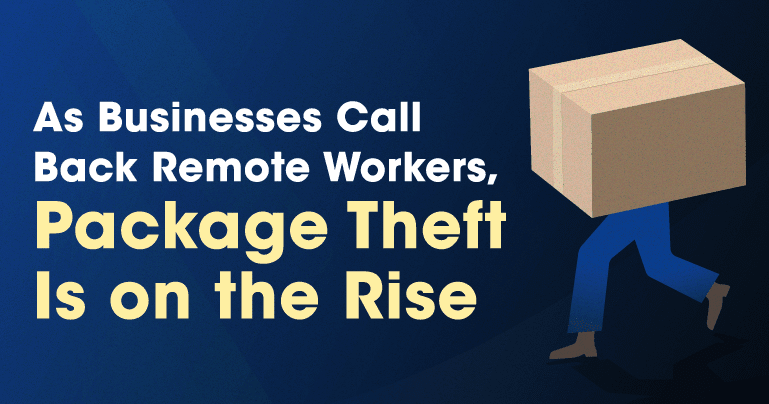 About 20 million Americans worked remotely in February 2022, down from 49 million in May 2020.1 Along with the steep decline in people working remotely, business leaders and politicians, including President Joe Biden in his State of the Union address, are also urging workers to head back into the office.

In fact, about 50 percent of business leaders told Microsoft they will require workers to come back to the office in the next year — if they haven’t already begun doing so.2 While a return to the office has been touted as an important step to getting back to “normal,” there’s a possible unfortunate side effect it may have caused — an increase in porch piracy.

We’ve been researching package theft, often called porch piracy, for years now. No national government statistics are collected on this phenomenon, but our research shows that it’s becoming increasingly common. As we enter the season of online shopping holidays — Prime Day in July, Black Friday and Cyber Monday in November, and the holidays in December — it’s important to learn just how rampant porch piracy really is and how we can protect ourselves.

Our most recent research on the subject shows a major uptick in the percentage of Americans who have experienced package theft compared to our previous data. Here are some of our findings:

The percentage of Americans who say they’ve been the victim of package theft reached a high of 54 percent in our most recent study, an increase of 13 percentage points from when we began our research in 2020. And recent thefts, or those that happened in the past three months, also increased from their 2021 levels, though much more modestly.

Still, with more than half of people saying they’ve been victimized by porch pirates at some point in their lives, that equates to about 69 million households.

The decrease in package theft reporting is apparent in our most recent research. When we began researching porch piracy in May 2020, 41 percent of the victims said they reported the incident to the authorities. That number went down by 10 percentage points in our most recent data, with only 31 percent of the victims saying that they reported the crime.

However, while most people aren’t reporting these thefts, there are a couple of factors that made them change their minds — losing something worth $100 or more or owning a doorbell camera.

Those who own a doorbell camera were 25 percent more likely to report the incident to police than those who don’t, likely due to the fact that they have video evidence of the crime. Only 19 percent of the victims who reported to police owned a doorbell camera. Additionally, nearly half (46 percent) of those who reported the incident to the authorities lost items valued at $100 or more. In comparison, those who lost something worth less than $50 were 21 percent less likely to report the crime.

While filing a police report may not help you find your stolen package, it could help prevent future thefts in your area. If authorities are aware of rising theft incidents, they could decide to devote more resources to solving the issue and catching package thieves.

There’s no doubt that having a doorbell camera makes people more likely to report package theft, but we know that prevention is the best cure. So, how can people keep their deliveries safe, especially as more of them are expected to leave the comfort of their home offices this year?

Here’s what we recommend:

Like all types of theft, porch piracy is the ultimate crime of convenience. That’s why making it a challenge, whether by making sure someone is home or asking neighbors to keep a watchful eye, can help keep your deliveries safe.

We surveyed 536 U.S. adults about their experiences with package theft. Our most recent survey was conducted online in November 2022.