Bad habits die hard: Two out of three people still reuse passwords across accounts, one in three share codes with others, and nearly 40 percent have been hacked.

October is Cybersecurity Awareness Month, which means it is time for our third annual report on America’s password strategies.

After 2020’s dramatic surge in Internet crime, were everyday Americans inspired to level up their security habits? While this year’s study revealed some behavioral improvements over last year’s results, it also revealed frightening weak spots in cybersecurity practices.

Read on for a revealing analysis of Americans’ password habits, as well as a guide to the best practices to keep you safe and secure online.

Hacking tools can now quickly crunch through whole dictionaries and use personal data to crack your secret passwords and codes. This sophistication makes generating unique secure passwords both more difficult and more important than ever.

Unfortunately, we found that a majority of Americans violate the first password commandment by using the same login for more than one account – a practice that can seriously compromise your online security: 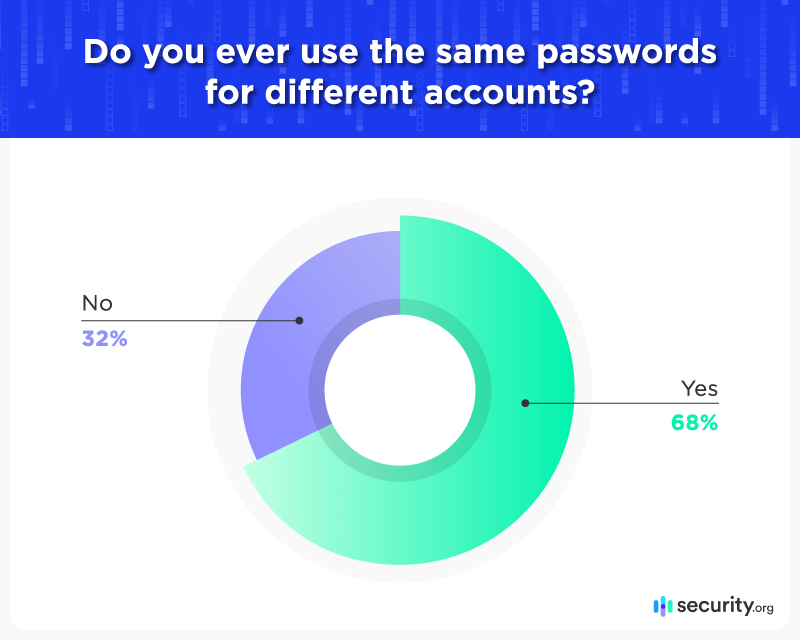 On the plus side, many people appear to have learned the dangers of shorter passwords, leading a large majority (84 percent) to use at least eight-character codes when logging in: 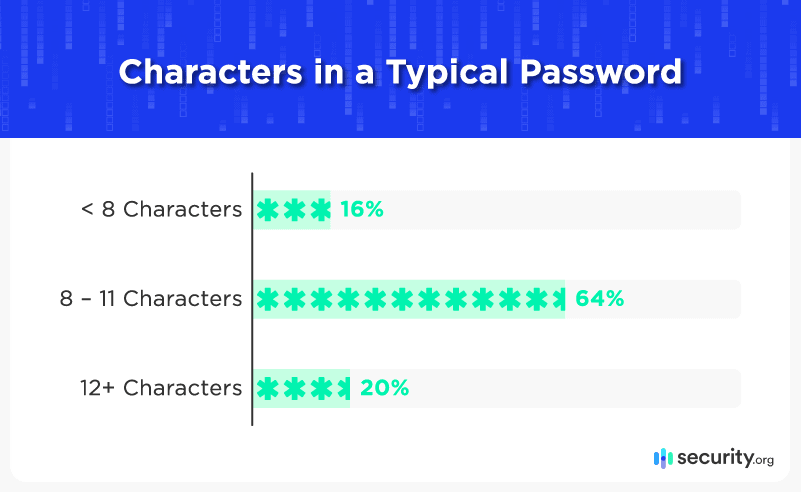 Of course, it’s not just the number of characters but how they’re chosen that counts most when it comes to security. Placing new punctuation into old passwords doesn't fool an algorithm. Arranging words randomly doesn't fluster a dictionary database. Combining your pet's name and your birthday isn't cryptic when that info is available on Facebook.

The most impenetrable passwords are constructed with randomly selected characters, but we found that many people still conjured up their codes using repetition and familiar words: 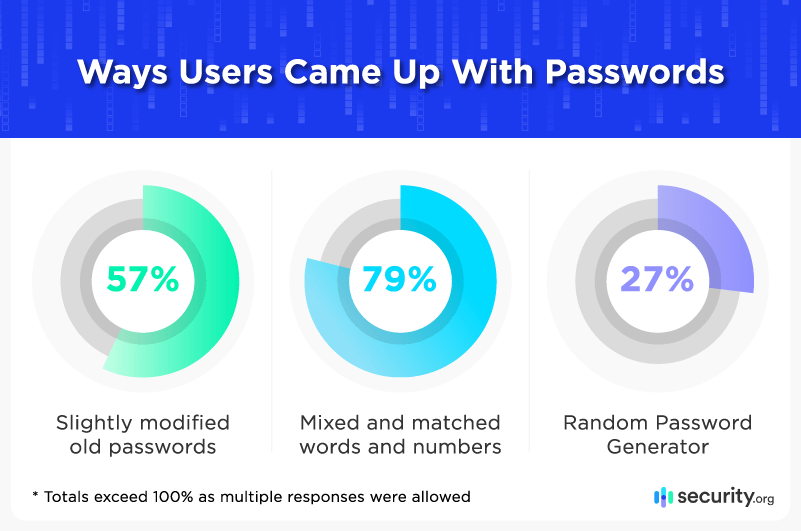 Recycled passwords are the easiest to hack, even when they’ve been slightly changed – which is how our respondents come up with most of their codes. 57 percent admitted to merely tweaking old passwords and substituting characters (like typing “@” for “a” or “1” for “i”) when updating their login information.

Slightly more secure were the 79 percent of users who generated their own passwords by creating new combinations of words and numbers. While methods varied (19 percent used full sentences, 17 percent selected randomly from the dictionary, and 13 percent claimed to roll word dice), they all shared the same flaw: real words are recognizable strings that can be more easily cracked.

This is especially true when chosen words and numbers aren't as random as we think. Examining respondents’ sources for passwords, we found several predictable elements: 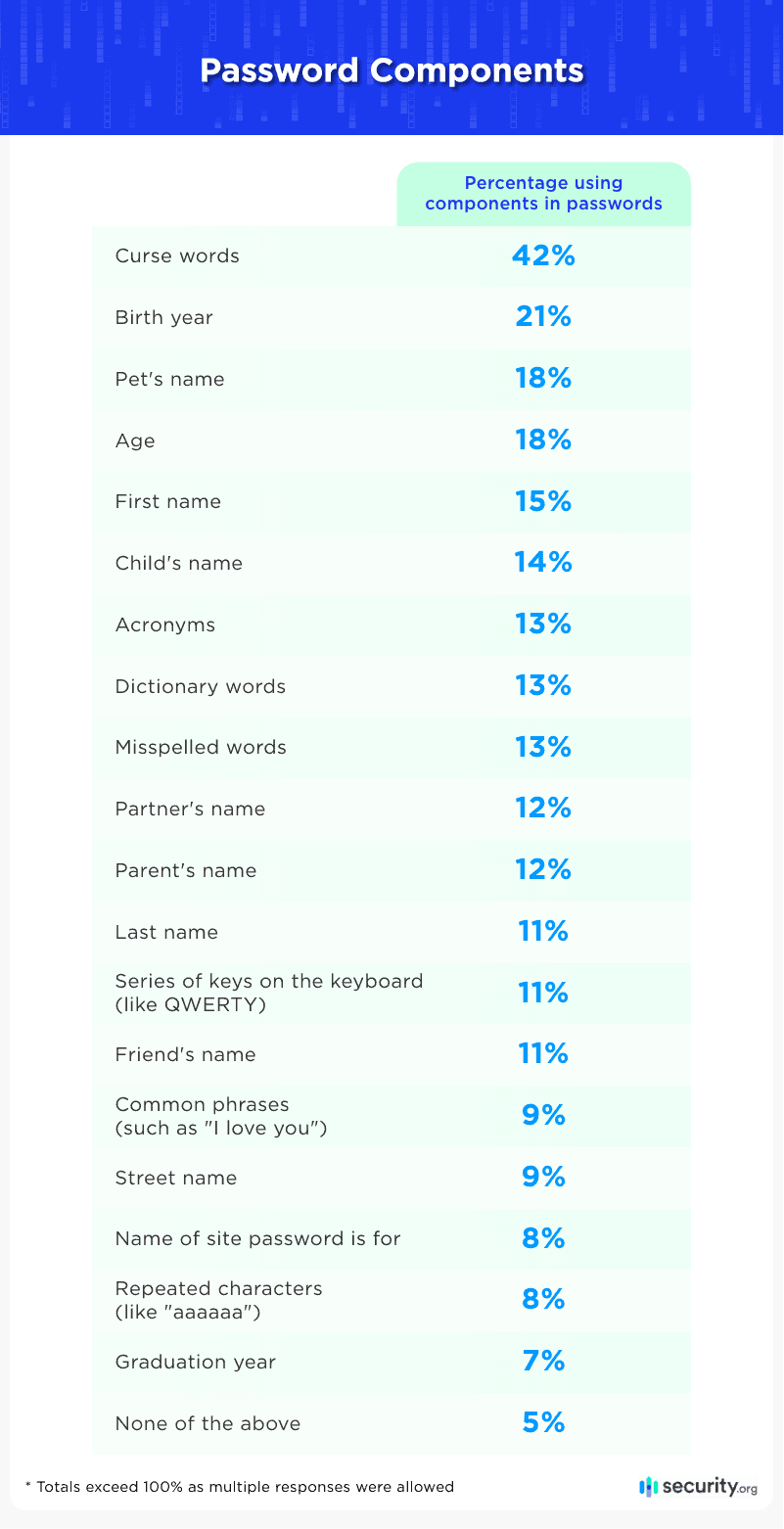 More than half of people admitted that they use familiar names in their passwords, such as their own name or their children’s or pet’s names. In fact, 15 percent used their own first name in their passwords! Using meaningful names and numbers makes work easier for hackers who may already possess personal data, while sequential keystrokes and “tricky” characters offer little protection from code-breaking programs.

Another 42 percent admitted to using curse words in their passwords, up from just 20 percent of people in our 2020 study. Although these words are probably very memorable for some people, they are vulnerable since they are so commonly used in passwords. Also, think twice before using profanities in your workplace logins since your employer may be able to see them.

Using important names and meaningful numbers might seem like an easy way to help you remember passwords, but they are also very easy for hackers to guess and crack.

By far, the safest way to compose strong, unique logins is to use a password generator tool. These programs follow recommended standards, don't use data tied to the user, don’t rely on real words, and never recycle suggestions. 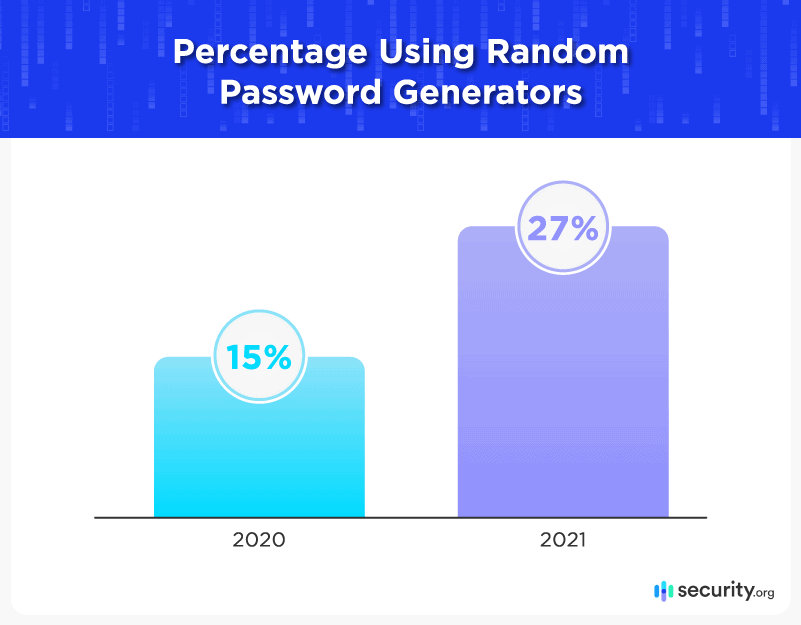 27 percent still isn't high enough, but with greater password manager availability and web browsers now offering such tools, the practice may further spread by next year.

If you need to quickly come up with a complex password, try a free generator like Norton's convenient utility.

Creating strong passwords is only half the battle, as it’s equally important to keep your logins private and secure.

It was encouraging to learn that many in our research have used two-factor authentication on at least one device or account: 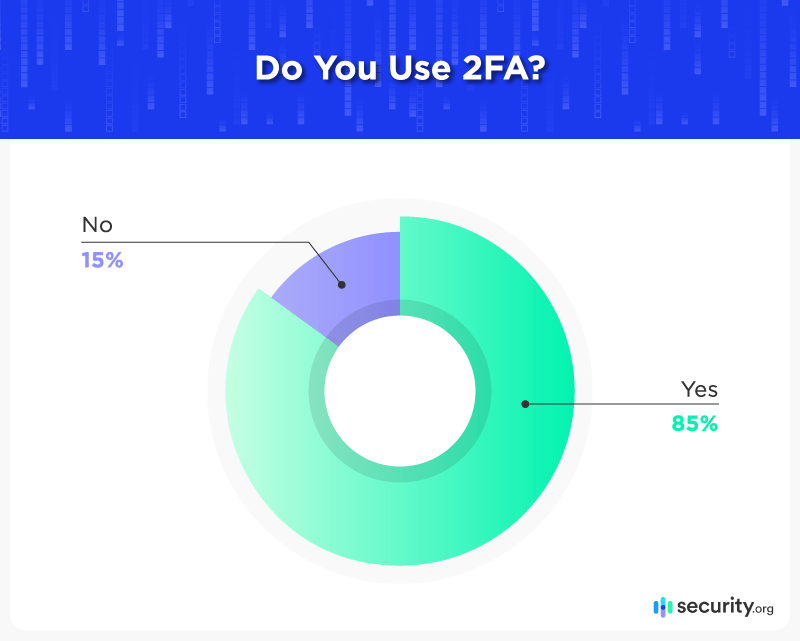 This number may be inflated by counting smartphones that authenticate via fingerprint or face scan by default. Hopefully, a similar proportion of people activate 2FA on all important accounts, which is like adding a deadbolt to back up their keys.

More disheartening was discovering that over a third of Americans continue to share their personal passwords. Unfortunately, this number had jumped significantly since last year. 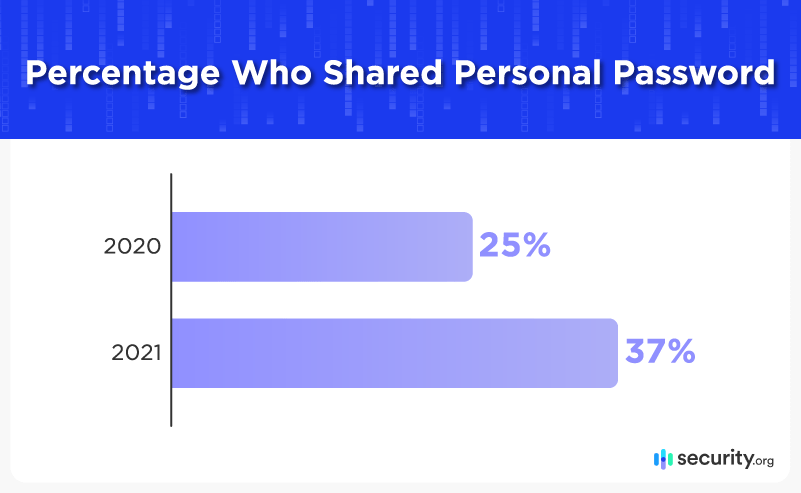 Part of the rise may be due to increased sharing of streaming service logins during pandemic lockdowns, but even this practice is a security risk that needs to be taken seriously. 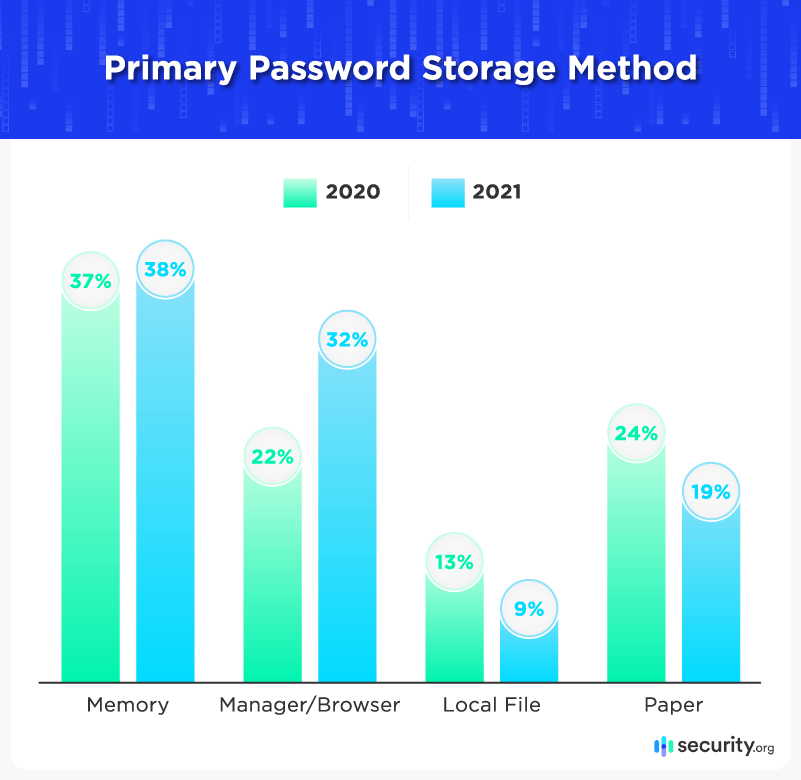 Most of these methods are imperfect. Those memorizing logins tend to reuse simple passwords, while notebooks and Post-Its are inefficient and easily pilfered. Local digital files are better, but remain unencrypted and insecure. Password managers are the best solution for storing complex codes (though browser versions should never be used on shared devices).

As greater portions of our personal, professional, and financial lives transpire online, securing data becomes ever more important. The first line of defense for your digital accounts is password protection, so don’t let bad habits make you more vulnerable.

It’s easy to think that hacking won’t happen to you, but 38 percent of those in our study have experienced at least one broken password, and most of those victims had employed bad practices. 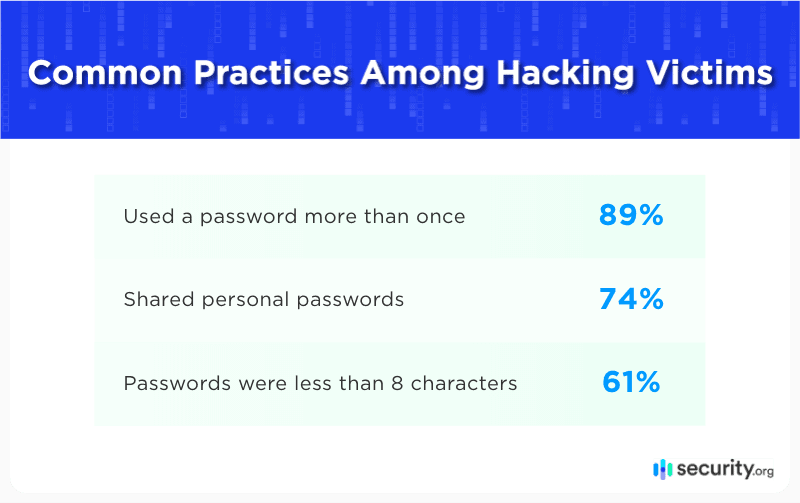 It’s little wonder that only 49 percent of Americans strongly believe that their passwords are safe. You may never be able to halt hacking or control all corporate data breaches, but good password habits can keep your information far safer. By following best practices, using password managers, and vigilantly guarding your identity against theft, you can feel more confident about personal digital security.

Best Practices for Your Passwords

The gold standards of password protocols are set by the National Institute of Standards and Technology’s (NIST). Its annual recommendations regularly evolve to keep pace with hacking and countermeasure techniques, but consistently feature these main principles:

Given all of these safety guidelines, you may be wondering whether your current passwords are strong enough. Plug them into our free Password Strength Tool to find out.

Using an online survey, Security.org asked 1,012 adults residing in the United States about their password habits when using online accounts in September 2021. They did not share their passwords during the survey.