Smart Home Technology Usage, Satisfaction and Purchase Intent: 2020 Within the next year, over 80 million U.S. households intend to purchase a new type of smart home device.

For its convenience, safety and ability to save users money, smart home technology has grown increasingly popular in recent years, and not just among tech-savvy millennials. According to recent research, approximately 32 percent of U.S. households have smart home technology and that is expected to grow to 57 percent by 2025.1

This report looks at the types of smart home technology consumers own today, their satisfaction with the technology, and plans to purchase new or upgraded “smart tech” over the next 12 months. Which devices are the most (and least) liked, and do people plan to invest more money into Internet of Things (IoT) devices? In addition, we considered how the COVID-19 pandemic affected smart home technology usage and satisfaction.

Our research finds significant demand for these products, at higher rates than previously forecasted. Here are key findings of our research, based on responses last month (August) from 605 self-identified decision-makers of home electronics purchases.

Smart TV and smart TV plug-ins like Chromecast and the Amazon Fire TV Stick are the most-owned smart home devices today. This is consistent with eMarketer’s 2020 research that said that video entertainment is the most common category for smart home technology, beating home monitoring and security among other types of devices. 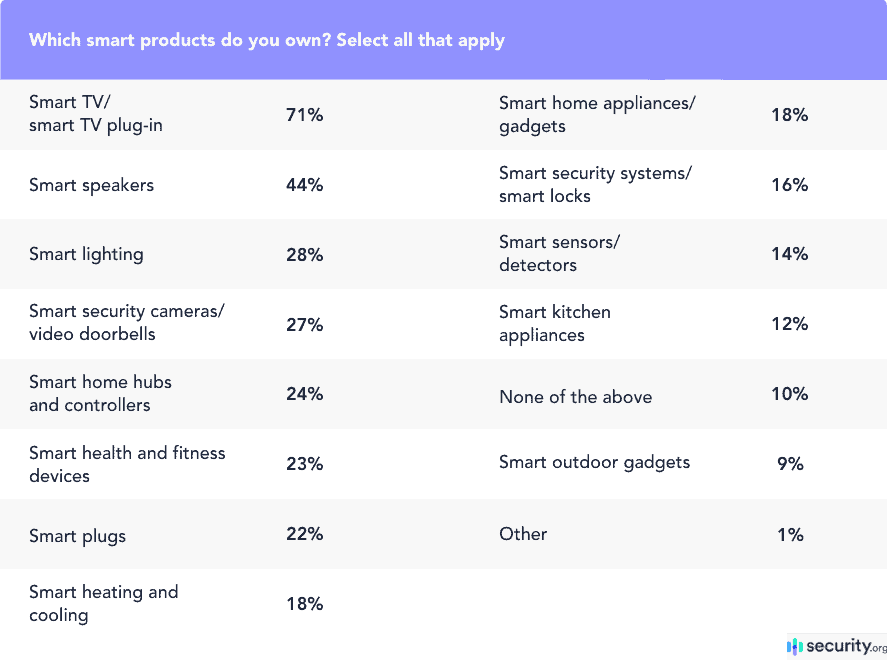 How Satisfied Are Consumers With Their Smart Home Tech? 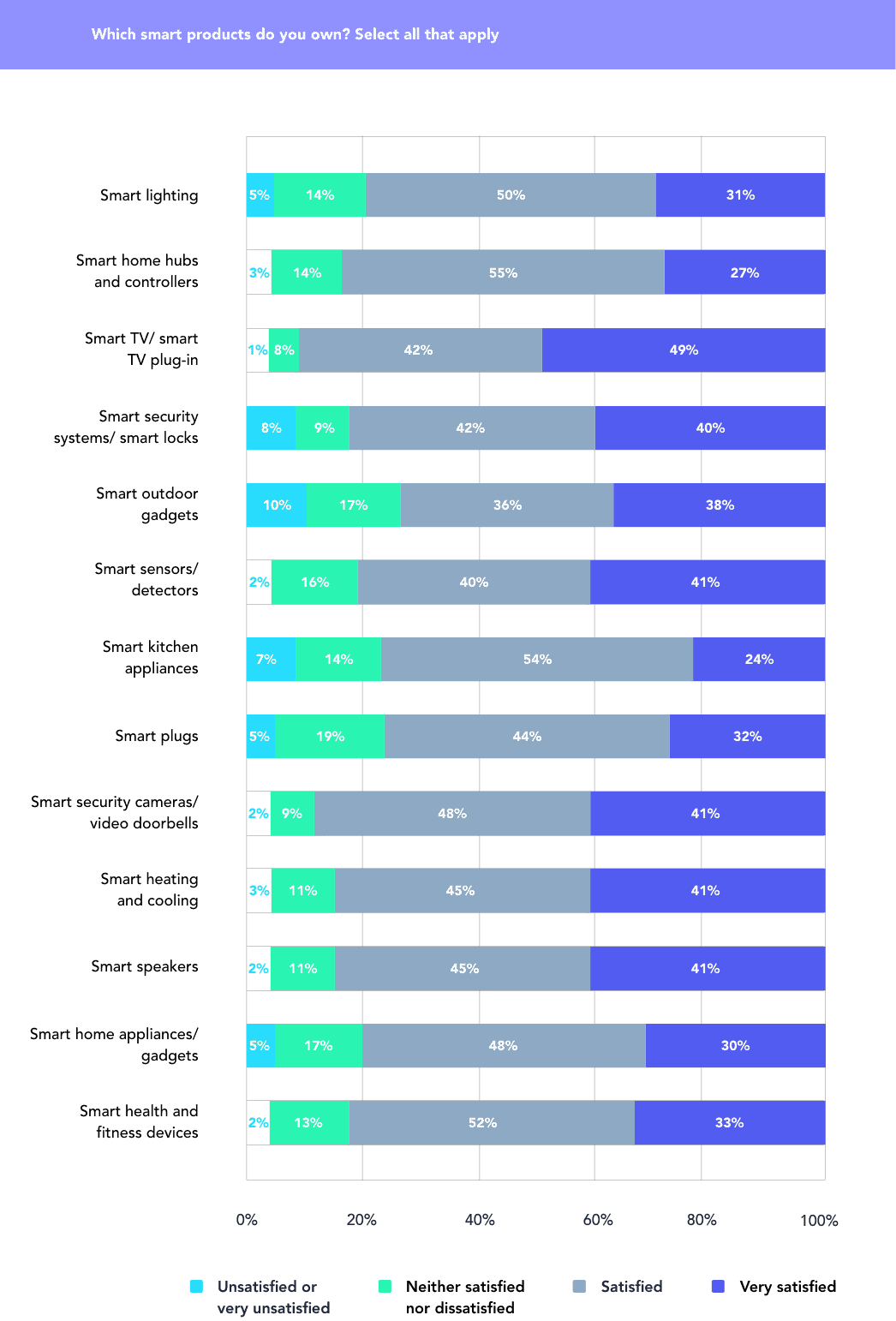 If someone is satisfied with a product, they would recommend it to a friend…right? In general, we saw lower recommendation rates compared to satisfaction rates. 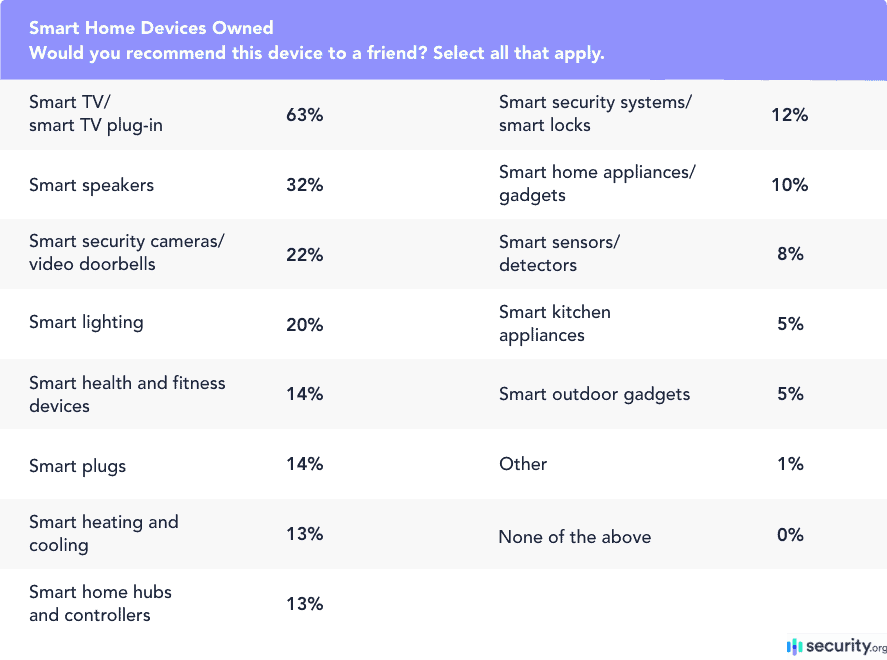 Not everyone wants to buy and use smart home technology. Many people find it unnecessary, irrelevant, and too expensive. Others had privacy concerns given the insecurity of many IoT devices and the commonality of security breaches. 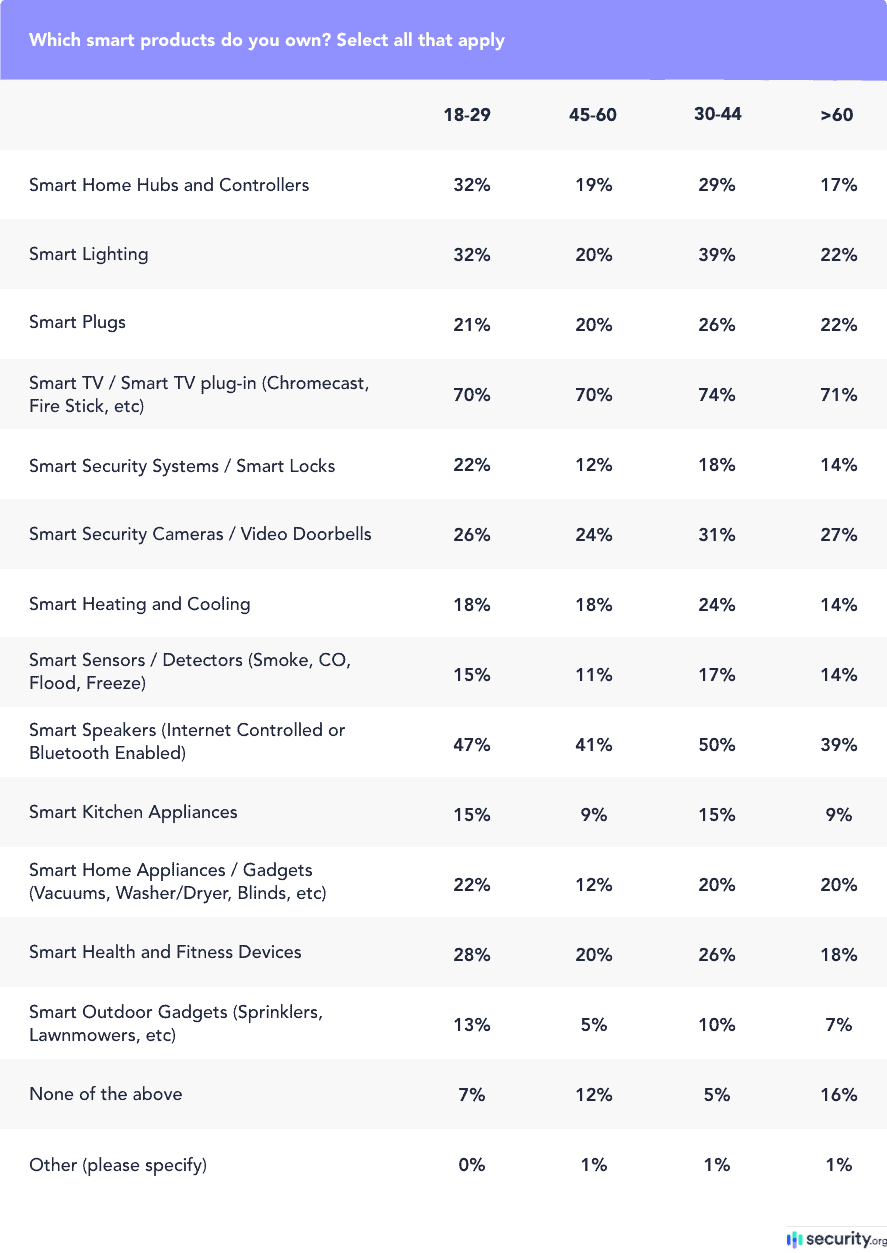 Who Is Buying Smart Home Tech?

We were also curious about exactly who buys smart home technology the most based on age, gender, household income, region, and device type.

Millennials and GenXers are most likely to have smart home technology. We believe this is because this generation has both buying power and curiosity about the latest tech. 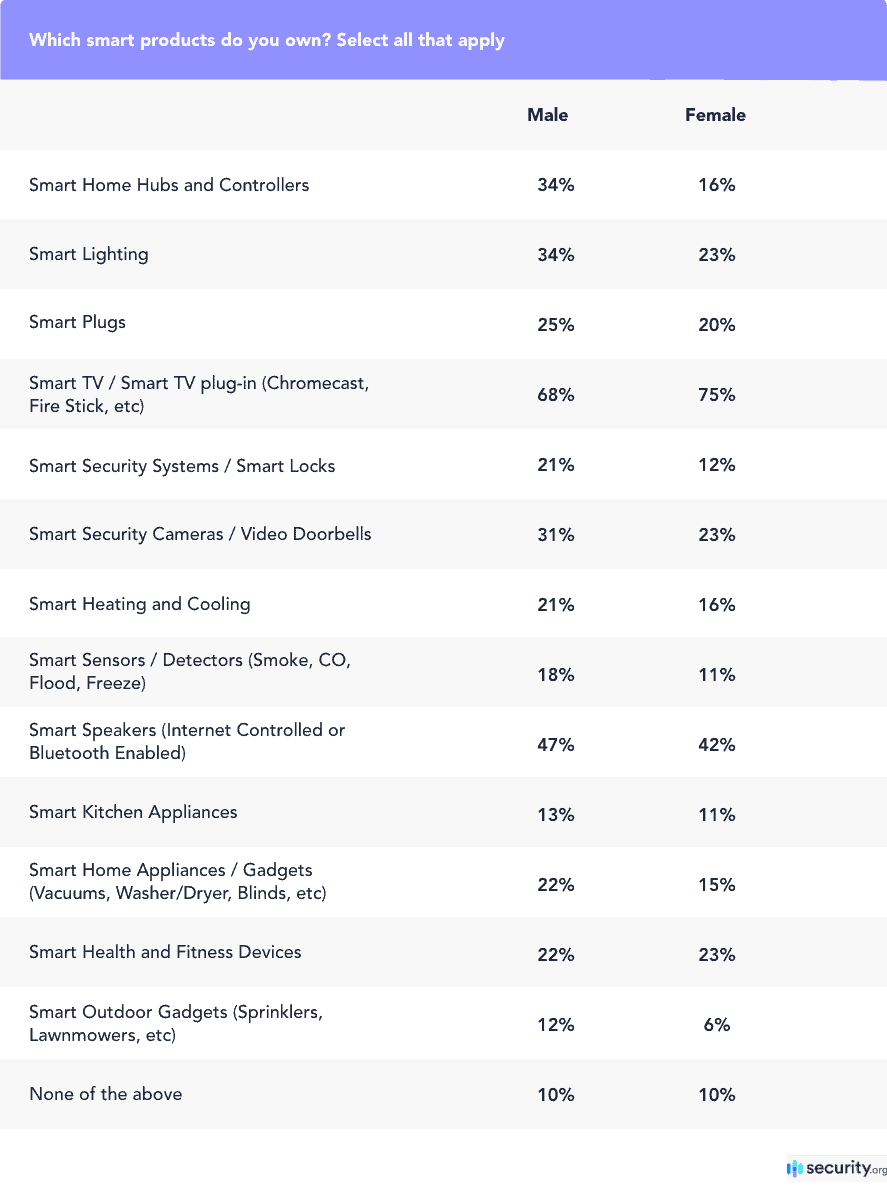 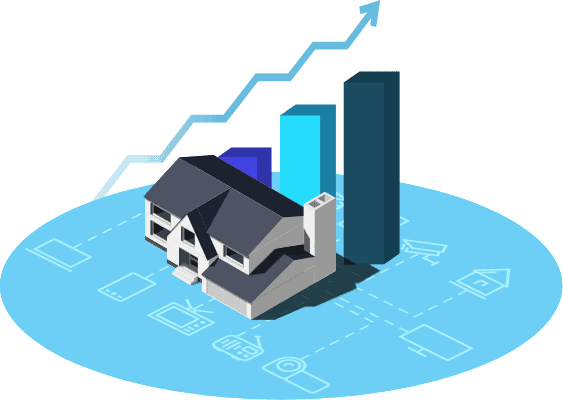 The Future of the Smart Home

As we said before, about two-thirds of people want to buy even more smart home tech than they already have, either in the next six months or the next year. We found out what types of tech they are interested in buying, specifically.

What They’re Purchasing in Next Six Months

Not surprisingly considering their overall popularity with consumers, most of our respondents said they wanted to buy smart TVs and TV plug-ins within the next year. 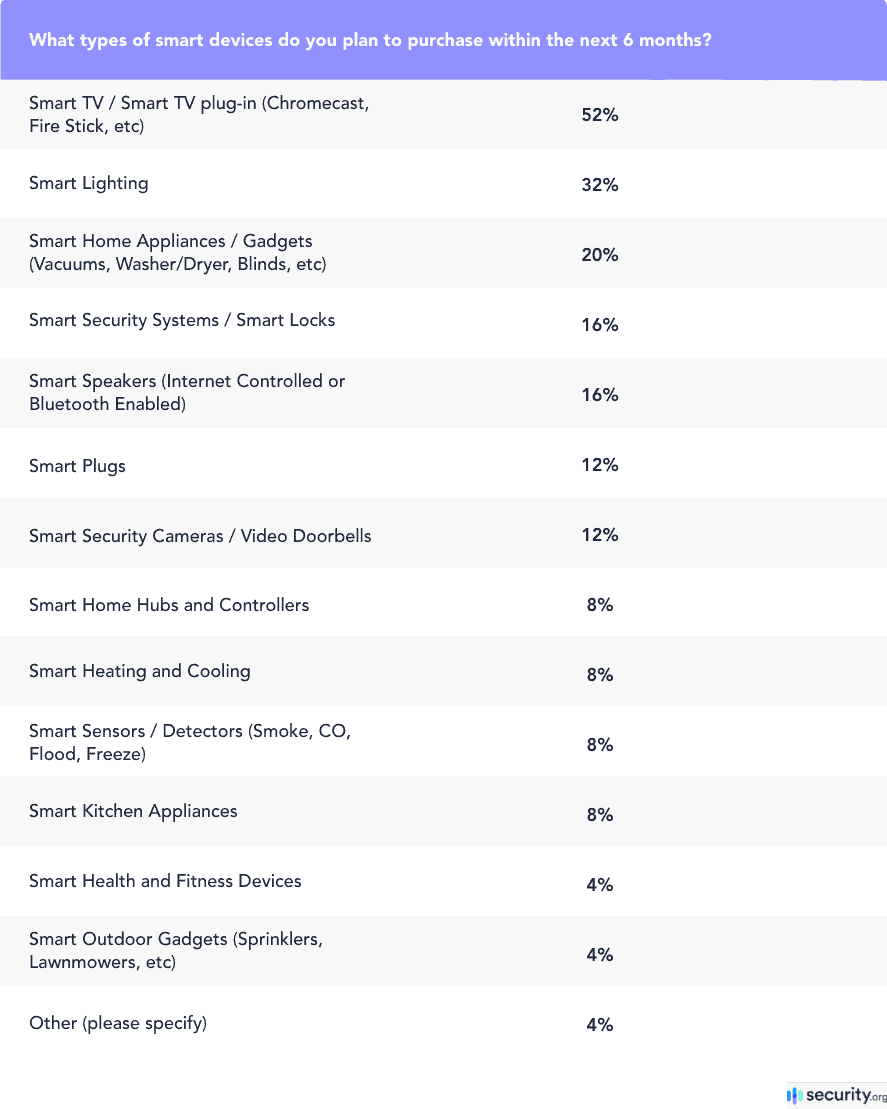 What They’re Purchasing in Next 12 Months

Some less urgent purchases were smart lighting, security cameras, video doorbells, security systems, and smart locks. In general, more people planned to purchase IoT devices within the next six months as opposed to a year, which implies a sense of urgency, especially for entertainment-related products like smart TVs. While we hypothesized that smart security products would be more urgent given their effect on home burglary, apparently streaming is a more pressing matter, according to our data. 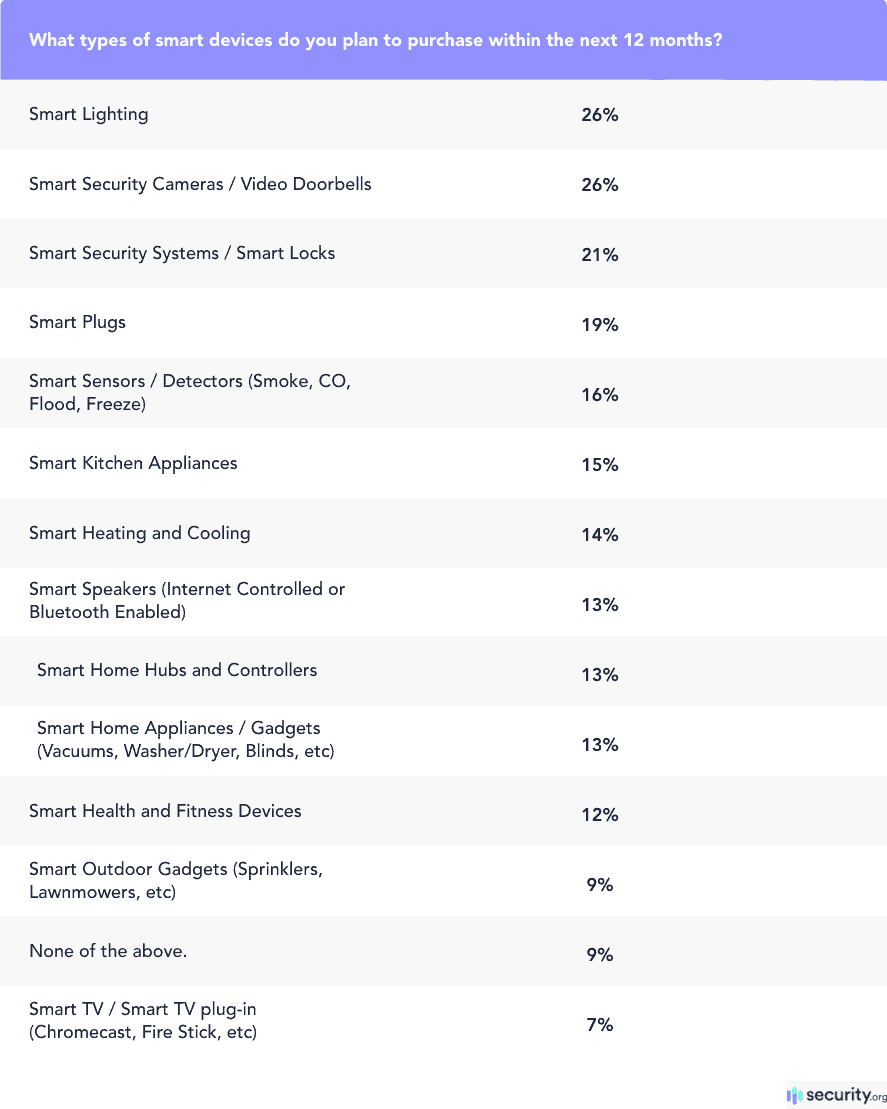 One thing from our research that rang true was people’s high usage and enjoyment of smart home technology. It’s no secret that these devices make our lives more convenient, safer, and more energy-efficient, and the industry is only growing year after year. If you want to hop on the bandwagon, read our home automation guide, which tells you how to build a smart home from start to finish.