What Is Home Automation and How Does It Work?

Alexa, turn on the lights! We don’t know about your home, but in our home, most things are automated; our lights turn on whenever we’re nearby, our coffee starts making itself in the morning, and our security system disarms whenever we’re almost home. Not only are these features convenient, but they also save us energy and thus, money on utility bills. But since home automation is a relatively new technology, some people may find it overwhelming. Here, we’re breaking down exactly what home automation is and how you can add some to your life. Believe us, the process is much less complicated than it may seem.

What Is Home Automation?

Home automation is the automatic control of electronic devices in your home. These devices are connected to the Internet, which allows them to be controlled remotely. With home automation, devices can trigger one another so you don’t have to control them manually via an app or voice assistant. For example, you can put your lights on schedules so that they turn off when you normally go to sleep, or you can have your thermostat turn the A/C up about an hour before you return to work so you don’t have to return to a stuffy house. Home automation makes life more convenient and can even save you money on heating, cooling and electricity bills. Home automation can also lead to greater safety with Internet of Things devices like security cameras and systems. But hold up; what’s the Internet of Things?

Internet of Things vs. Home Automation

The Internet of Things, commonly known as IoT, refers to any device that’s connected to the Internet that isn’t normally; for example, a smart light bulb that you can turn on and off via an app. All home automation devices are IoT devices, which can be automated to trigger one another. So while IoT refers to the devices themselves, home automation is what you can do with the IoT devices to make your life just a tad bit easier.

How Does Home Automation Work?

Home automation works via a network of devices that are connected to the Internet through different communication protocols, i.e Wi-Fi, Bluetooth, ZigBee, and others. Through electronic interfaces, the devices can be managed remotely through controllers, either a voice assistant like Alexa or Google Assistant or an app. Many of these IoT devices have sensors that monitor changes in motion, temperature, and light so the user can gain information about the device’s surroundings. To make physical changes to the device, the user triggers actuators, the physical mechanisms like smart light switches, motorized valves or motors that allows devices to be controlled remotely.1

While some home automation systems require hubs, some mobile applications connect directly to a router, which connects directly to an IoT device. Of course, it’s preferable when there’s no hub, as that’s just an added cost on top of the cost of the IoT device itself.

The hallmark of home automation is remote control, which is done through either a mobile application or through a voice assistant.

Rather than basing home automation systems off a dedicated IP address or high-end computer, many systems are based on a cloud, which is both more affordable and easier to use.4 For example, the Nest cameras don’t have slots for micro-SD cards, which would have allowed footage to be stored locally. Rather, all recorded footage is automatically uploaded to a cloud server, only accessible through a Nest Aware subscription. In general, cloud computing is incredibly popular on the Internet, so IoT devices are no exception.

The way that IoT devices connect to the Internet and each other is their control protocol; if IoT devices are people, think of the protocol as their common languages. Like on Earth, there are a few different languages, or protocols, that devices can speak, including:

For most people, WiFi-connected devices will be sufficient, but for more advanced smart homes, you might want to switch to a mesh network like Z-Wave or ZigBee.

Pros and Cons of Home Automation

Like anything in life, home automation has its pros and cons. Overall, we think it’s more than worthwhile, but it may not be for everyone, depending on your personal preferences.

What Is A Smart Home?

A smart home is any home that includes automated, Internet of Things devices connected to mobile applications. Using these IoT devices, users can control many things in their home from lights to security systems to appliances. Increasingly, more and more homes are built with automation from the original construction, but technically, any home with an internet connection and IoT devices counts as a smart home.

How To Set Up Home Automation

Setting up your home automation system is actually a lot less complicated than it may seem. You can either wing it and buy a smart home product that sounds like it’s up your alley, or set up your smart home more strategically by following these easy steps:

Tip: One way to save money on IoT devices is to wait for a seasonal sale. SimpliSafe, for example, often has promotions that promise users 25 percent off any new system plus a free camera, so be sure to check out SimpliSafe’s discounts before pressing purchase.

Every year, more and more devices become available in IoT form; we’ve seen everything from smart medical alert systems to smart microwaves. Here are the devices available, as well as what you should look for. 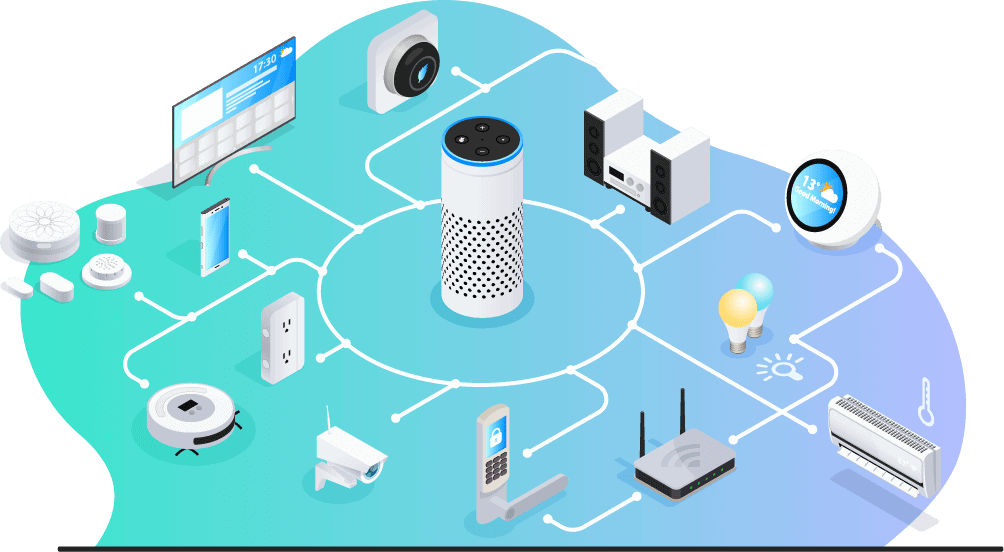 In 2015, there were 15 billion IoT devices. By 2020, that number had ballooned to 200 billion8 IoT devices and counting. While we can’t list all of the IoT devices available, as that list is ever-growing, here are some of the most popular:

FYI: If you’re a pet owner, you’ll want a security camera or video doorbell that can differentiate between people and pets, only alerting you if they detect people when armed. Look for a device with person or animal detection rather than motion alerts only.

Once your IoT devices are bought and set up, it’s time to create the home automation functionalities that sold you on the devices in the first place.

With some IoT devices, digital security can be more of an afterthought, not originally built into many first-generation models. However, as security breaches become more commonplace, many manufacturers are changing their ways, making their IoT devices less hackable. But ultimately, it’s up to the user to take advantage of these digital security features. Here’s how:

While no action can prevent hacking 100 percent, you can greatly reduce your likelihood of being hacked with only a few simple steps.

Looking to learn more about home automation? Check out these resource guides compiled by the experts at Security.org:

Just like building Rome, automating your home can’t be done in a day. Rather, you can start small and then build up your home automation system over time. With so many new IoT devices being put on the market every day, there’s truly no limit to what you can automate, making your life safer and more convenient than ever before.