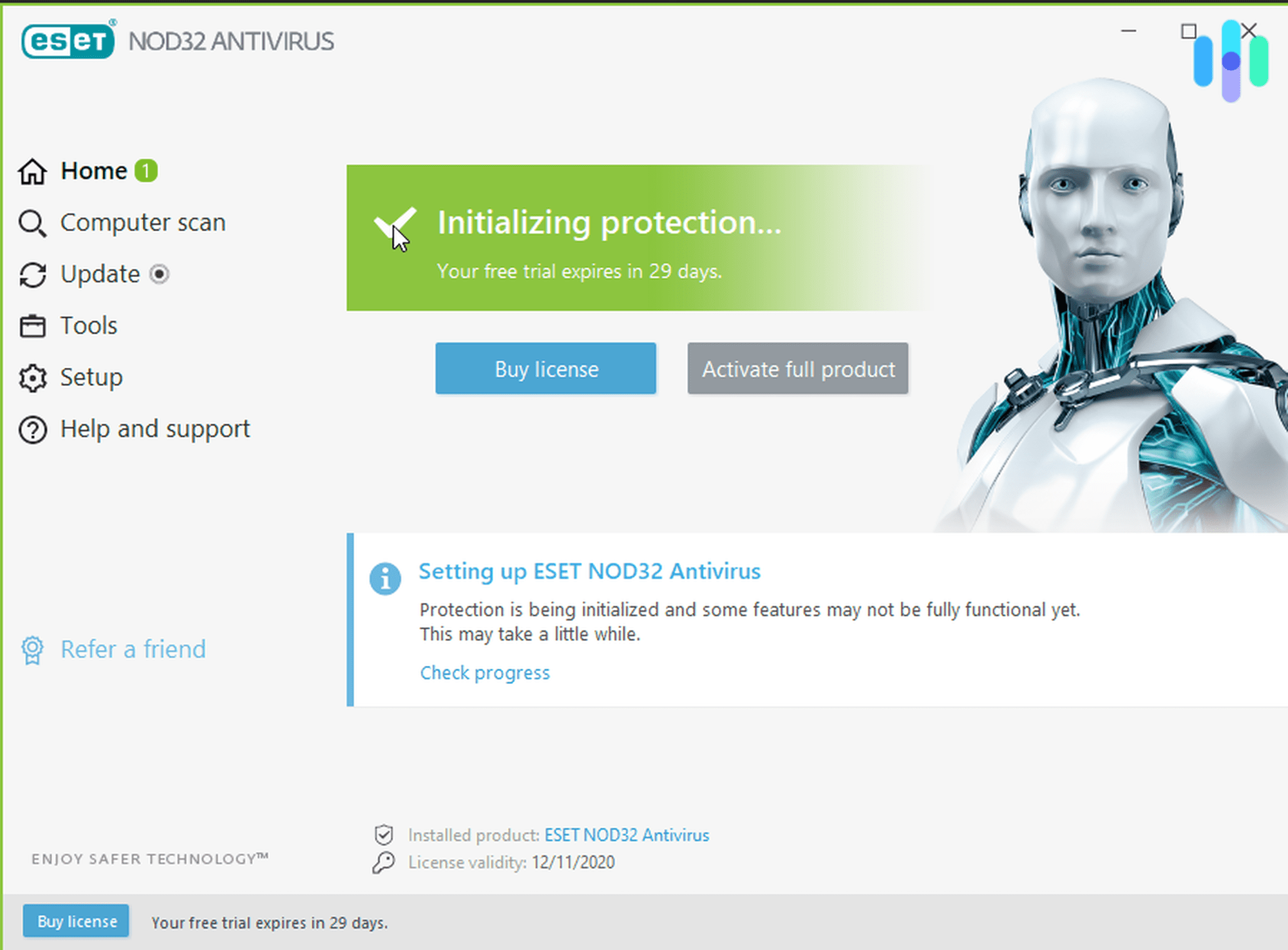 Regardless of what we think of their antivirus software, ESET’s pricing is nothing if not a bit of a hot mess, which is why we did all of the research to give it to you as plainly as possible. Let’s begin!

We tried out ESET for 30 days without paying, but there’s no unlimited free subscription. Still, we’re glad that we didn’t have to commit to a year, two years or three years without actually trying the antivirus software out for ourselves. But after the initial 30 days, we had to cough up some dough.

ESET’s pricing is a bit of a mess, with different plans for desktop and mobile devices. Let’s start with their more comprehensive packages that include antivirus software, plus a few extras.

ESET’s prices are definitely a little high, as we’ve seen one device covered for a year for $10 less than $39.99 (you do the math). But in general, antivirus software is on the pricey side, so we recommend buying subscriptions for longer time periods for more devices to unlock the most savings.

You might be wondering what is the actual difference between the Essential, Advanced and Ultimate plans. We cover this more extensively in our ESET review, but here’s a little summary of what each plan covers.

Did You Know: The software that stores and prefills passwords is typically known as a password manager. Given that the average person has anywhere from 70 to 80 passwords,1 if you don’t already have a password manager, we recommend signing up for Smart Security Premium.

However, some people may want to stick to antivirus software only. If that’s the case, ESET offers basic and advanced software for Macs only, as well as Androids, which we’ll get to in the next section. We went with the Cyber Security Pro for Mac because we wanted the most advanced antivirus software and the NOD32 version on Windows, but here’s a breakdown of how all of the plans differ.

Basically, the Cyber Security plans are the same as the Essential, Advanced and Ultimate Protection below, except without those extra features like safe transactions, photo encryption and a password manager. You can choose from one, two or three years from one to 10 devices, with the Pro plan; the regular Cyber Security plan only supports a maximum of five devices. Hey, we don’t make the rules!

Finally, if you just want antivirus protection on your Android device, there’s Mobile Security for Android, which is available for free if you’re okay with just antivirus and not protection against phishing and insecure payments. However, if you want those extra features, the Premium subscription works on up to five devices for up to three years.

FYI: Unfortunately, ESET’s antivirus software doesn’t cover iPhones or iPads at all, although they do have an app that adds on two-factor authentication called ESET Secure Authentication.

While we’re not going to go into extreme detail about the testing process behind the Cyber Security Pro for Mac package, we can give you a little information on what we liked most about the software:

Student Discount: How To Get It

Whether you’re a current student or a past student still clinging to your .edu email address, you can get half off Internet Security simply by giving them your email. Here’s the pricing with and without the student discount:

If you try ESET out fnd you’re convinced it’s not the best antivirus software, you can return it for up to 60 days after your purchasing data for a full refund, which includes the free, 30-day trial. This is more than enough time to make your decision, so we love that testing out ESET didn’t require any dire financial straits on our part. Booya!

Although ESET is a decent antivirus software, they have a long way to go on the coherence of their services and pricing. Hopefully, we helped lend some clarity so you can make your final purchase decision, and be sure to take advantage of the free trial and student discount, if you still have a .edu email address. Also, if you’re happy with ESET, you may as well lock in a lower rate by signing up for more than a year at a time. Those are our savings tips, and we’re sticking to them!

That was a lot of information, but we understand if you have more questions.