Based in Romania, BitdefenderVPN has over 1,300 servers across 27 countries, but their privacy policy was less than savory. Is it worth it? 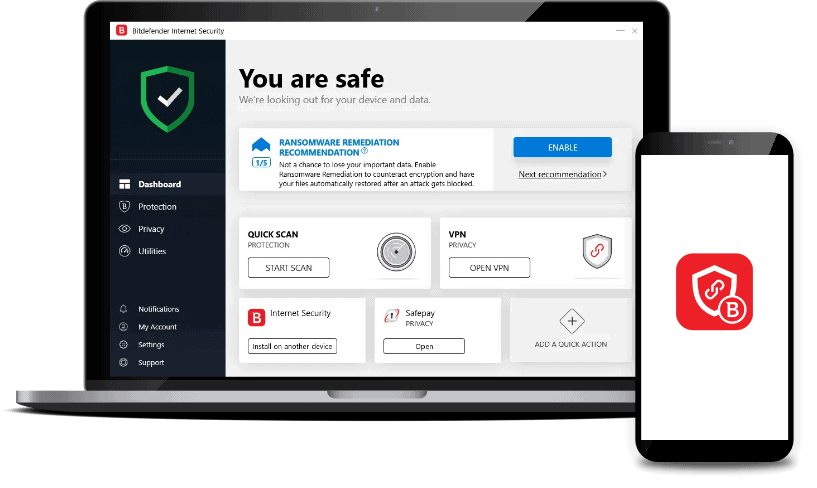 Live from Romania, it’s Bitdefender! A company that has been around for almost two decades with over 1,300 servers across the globe, Bitdefender’s VPN might be a perfect solution to your online security woes. Come with us for a little adventure down Bitdefender-way to see if they’re the right VPN to protect our online habits.

Like Ryan Seacrest’s radio show, this section is here to play the hits. Some of our readers just need a few bullet points to decide whether or not to give Bitdefender a shot. But if you’re like us and love to dive into the details of each VPN, feel free to keep on scrolling.

Now with those quick hits out of the way, let’s talk a bit about what kind of company Bitdefender really is. Founded in Romania in 2001, Bitdefender is one of the oldest VPN companies we’ve reviewed. Lucky for us, being based out of Romania means that they’re not subject to the privacy jurisdictions of Five Eyes, Nine Eyes, and 14 Eyes. On top of all of this, Bitdefender is trusted by some of the biggest tech companies in the world, like Microsoft, NETGEAR, and the Linux Foundation. All of this to say that we see Bitdefender as trustworthy, and other than one of their updates breaking some Windows PCs back in 2010,1 they have a solid reputation with users across the world.

Simply, VPNs will always slow down your connection as the data has to travel further from the computer to a far-off server. The real question is if the VPN will slow down the computer enough to notice, to affect download speeds, or to generally make our lives more difficult. To figure this out, we tested each VPN for download and upload speeds on two different computers. We ran speed tests from both a 2011 Macbook Pro in Brooklyn as well as a Windows 10 Acer Aspire 5 in the Philippines to see exactly what kind of slowdown we’re dealing with.

As you can see from the table below, our speeds with the VPN were faster uploading from our Mac and downloading on Windows, making it a near wash for the best O.S to use with Bitdefender. Although, it is a bit concerning that the ping difference on Windows was so elevated. Typically, the average Ping difference is 32 percent, and our Windows test dramatically exceeded that average.

WebRTC stands for Web Real-Time Communications, a standardized collection of technologies that permits web browsers to communicate back and forth with each other directly. There are a vast number of positives of using WebRTC, everything from helping Teladoc control a user’s microphone and video camera straight from the browser to bringing Fortnite back to mobile devices.2 On the negative side, any devices using WebRTC need to know each other’s private IP addresses. Browsers like Firefox, Chrome, Opera, and Microsoft Edge default to having WebRTC active, so we need to make sure our VPN locks down our WebRTC. We were happy to find that there were no WebRTC leaks while using Bitdefender.

DNS is another potential leak-point for VPNs. DNS stands for the domain name server, a database of public IP addresses tied to hostnames. So, instead of an IP address that reads 176.13. 69.63, the DNS would show as Facebook.com. It’s essential to test for DNS leaks because a device might send DNS traffic outside of the VPN tunnel, thereby compromising any potential connection. Fortunately, our tests indicated no DNS leaks, either. Security is our chief concern (heck, it’s even in the name of the site) so the lack of WebRTC or DNS leaks makes Bitdefender a secure option.

As we mentioned, Bitdefender is a company with a well established history in the digital security space. Although their server offerings are not as extensive as some of the VPN-only companies, at more than 1300 servers in 27 countries, they could be doing much worse. With Bitdefender’s server diversity, we were able to see geo-restricted content on popular sites like Amazon, and find super cheap flight prices for a trip next summer. Bitdefender’s server offering is more than enough, but some users are looking for even more, so if having tons of servers is what you’re looking for in a VPN, check out our NordVPN review.

Did You Know: You can use a VPN to find cheap flights by searching from different servers! Many airlines change their prices depending on where you’re located.

Another killer (pun intended) aspect of a good VPN is a kill switch. This is the option to turn on a feature that will disable all internet activities the moment the VPN is disconnected. Although we had to enable Bitdefnder’s kill switch manually, it was super effective, especially when we were using the MTA’s Wi-Fi to look at our budget for work when the VPN disconnected. Thankfully, Bitdefender’s kill switch shut everything down, locking down our private information.

Considering it’s the 21st century, watching TV doesn’t just include cable anymore; rather, streaming and torrents are the way of the future. One of the most common reasons why people use VPNs is to access geo-protected content from services like Netflix, Hulu, BBC, and HBO. While using Bitdefender, we had no problem getting onto our favorite streaming sites. Even though some VPNs are blocked by Netflix’s firewalls, that’s not the case with Bitdefender.

Bitdefender also made it easy to torrent anything we wanted from our favorite hosting sites. P2P sharing went off without a hitch and with their fast download and upload speeds across Mac and Windows, we were able to download massive files with ease.

We mentioned this briefly above, but we were disappointed to see that Bitdefender doesn’t support either of these useful VPN features. That being said, when we reached out, they did note that they were looking into adding multi-hop and split tunneling to their offerings. We’re looking forward to it!

While VPNs are meant to protect us from the prying eyes of our Internet Service Providers, we also want to make sure that we’re protected from the VPN itself. Here’s what information of ours Bitdefender collects:

IP addresses are the major red flag here. Logging IP addresses is a surefire way to lose trust in a VPN, and many providers are able to deliver a great service without logging them. This makes Bitdefender a potential risk if they were hacked, or even in a worst case scenario, if Romania signed on to one of the international coalitions like Five Eyes, Nine Eyes, or 14 Eyes. If privacy is a huge concern of yours, Bitdefender may not be your best bet.

AES, or Advanced Encryption Standard, is used for encrypting and decrypting data flowing through VPNs. Bitdefender goes above and beyond the typical AES of up to 256-bit, the highest standard most commonly used today, by also including RSA and SHA 256 encryption. RSA and SHA are older and slower encryption methods, but even the U.S federal government trusts SHA for encryption. For speed and VPN optimization reasons, we decided to use AES-256, but the availability of other encryption methods provided us with the optionality we look for in VPNs.

For a pricing deep dive check out our Bitdefender VPN pricing guide, but for a quick reference the chart below should do the trick. We ended up going with the one-year plan for the 20 percent savings, and would recommend to go with that plan as well, but make sure you don’t forget about the seven-day trial!

A reputable company with a long history, Bitdefender’s only major red flag was the logging of IP addresses, not ideal for the privacy-minded. However, their middle of the road pricing for dynamic IP addresses and Netflix access at solid speeds gets them some major points in our book.

We recommend Bitdefender if you…

Bitdefender might not be for you if these are a priority…

If you’re looking for a straightforward VPN that could potentially turn into a full cyber security system, Bitdefender might just be for you. However, if security and features like multi-hop are at the top of your list, there’s a good chance you can find something better. Take a trip over to our best VPN list to find the perfect match.

Just in case you have any additional questions about Bitdefender, we’ve tried to answer a few of the most common here.