Swann goes above and beyond the standard home security system experience to deliver more robust options for power users and those with more complex home security requirements. While its products are in the mid to high-end range, Swann backs everything up with a mind for innovation and the features to make it a worthwhile investment. 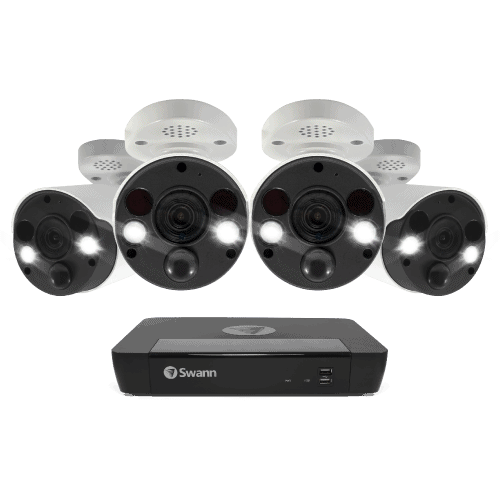 Looking to avoid monthly fees for your home security? We didn't pay a dime after our initial equipment costs for Swann, and the weatherproof cameras we tested were definitely worth the money.
View on Amazon
Contents: Pros & Cons Voice Commands Installation Monitoring Support Recap
View on Amazon

Let’s face it: home security can be expensive, so the idea of a security system with no monthly fees is pretty intriguing. Swann is a big box retailer known for its industrial cameras and incredibly barebones systems (or minimalist, depending on how you look at it). Basically, they’re a hands-on company that doesn’t follow industry trends like sensors, panic buttons, and integrating with other Internet of Things devices. If you’re looking for a very basic security system, read on to see what our experts thought of Swann.

We know you’re super busy, so here are our favorite (and least favorite) things about using Swann:

To see us actually testing out and using our Swann security system, watch the video below.

What’s in A Security System From Swann?

Our system from Swann included two cameras and a hard drive for local file storage; that’s it. But, honestly, compared to the other traditional security providers out there, this is way more minimalist than most security systems, which usually involve motion, entry, and glass break sensors along with keypads, panic buttons, base stations and the like. Let’s take a look at how Swann worked in practice.

Swann’s camera can be used indoors and outdoors, although we chose to use it indoors. Still, for those that want to use it outside, it has an IP rating of 66, which means that it’s 100% protected from solids and can withstand even powerful water jets. Just don’t immerse it in water!

We digress. In terms of video, we were pretty satisfied with the Swann camera; it has 1080p HD, the current industry standard, which produced a really clear picture, as you can see below.

Unfortunately, it didn’t cover as much ground as we would’ve hoped, with a field of view just over 100 degrees. We were also disappointed that the camera didn’t zoom in at all, which would’ve been useful had we had an intrusion. At least we were able to see well at night due to the camera’s infrared LED sensors!

Now, clearly storage is through the one TB hard drive, which we detail below. Having a hard drive meant that the camera can still record footage even without Wi-Fi; that definitely came in handy for us, as our Wi-Fi can be a bit spotty at times. However, cloud storage was seriously lacking. Only stills, not videos, were automatically uploaded to a Dropbox. To create more redundancy, we ended up uploading our footage from the hard drive onto personal cloud storage, in case something happened to the hard drive.

On the flip side, another drawback of the camera is that we couldn’t use it to speak to who it was on; in other words, it lacked two-way audio. This is a pretty standard feature of security cameras, so we were disappointed that we couldn’t speak to whoever we were recording remotely. Instead, we had to call them like normal, which was not nearly as fun.

Not to be a bunch of Negative Nancy’s, but we also weren’t thrilled with the camera’s artificial intelligence, or lack thereof. Since it couldn’t differentiate between people and other moving objects, we received a lot of notifications that weren’t necessary, like when our curtains rustled, for example. On top of that, we sometimes weren’t even alerted when actual people walked by! A good camera with person detection is the Nest Cam IQ Indoor, which also has facial recognition if you pay for Nest Aware. All in all, we found the Swann camera to be a bit subpar, but not all Swann cameras are created equal, so you might want to check out another option.

The hard drive is where our cameras stored their footage locally. We prefer both local and cloud storage so the footage is backed up, and it was pretty time-consuming to transfer the local storage onto our personal cloud networks. Keep in mind that one TB of storage holds about 500 hours of footage, so we liked to make the transfers periodically, even though it was a bit annoying.

Pro Tip: Wire your camera to your hard drive so that it stores its footage automatically.

Like we said before, Swann works with Google Assistant, but the action is a bit hard to find; it’s not under Swann but rather, Home Safe View by Swann Communications1. Using our voices alone, we had Google Assistant show us our camera footage on our Nest Hubs, which was nice. But unfortunately, this integration ended there, so overall, we’d say it’s pretty minimal. We were also disappointed that Swann doesn’t work with Alexa, the most popular voice assistant on the market today.

As the system is completely hardwired, setup was a lot more complicated than with peel-and-stick wireless systems. We had to connect two separate cameras to the hard drive, so the majority of the time was spent deciding where to place and then mounting the cameras. We would say it took me about 15 minutes to see an image for the first time. However, the system is completely color-coordinated, so despite its many parts, we found the setup to be pretty intuitive if not a tad time-consuming. On the flip side, we’d like to point out that Swann also has wireless security systems available if that’s your preference.

We noticed a few issues with Swann’s cameras. While the image quality is pretty okay, we noticed that the camera does not always immediately respond to motion and heat. There were a few times when we walked in front of the camera and it didn’t detect anything for a few seconds. This may seem small, but it could be an issue if you have an intrusion and are trying to find footage of the perpetrator. A few seconds may be the difference between identifying your robber or letting him walk free. We also had some issues with the livestream starting, often getting a “loading” screen until we rebooted the app. In general, everything worked well and I was happy with the system and its notifications.

Swann doesn’t offer 24/7 professional monitoring or cellular backup. That means that you’ll monitor your system yourself in the SwannView Link app. It also means that your system won’t work in the event of a power outage or Wi-Fi outage, a drawback of Swann. If you want full 24/7 around the clock coverage then it is probably best to go with someone like a Vivint or ADT, or, learn more about Swann and their pricing and packages.

If you’re looking for a security system with professional monitoring, check out Ring Alarm; they have a plan available for either $100 a year or $10 a month, very affordable compared to competitors.

As we mentioned earlier, we had some serious issues with livestreaming footage on the SwannView Link app. It’s pretty buggy, and we didn’t always receive notifications from motion events in a timely manner. Other Swann customers seemed to agree with me; the app only has a 1.9 star rating on the Apple store3, but a decent 3.5 on the Android store4. We used the iOS app, so Swann might be a better fit for Android users.

We had a few different options when it comes to customer support at Swann2. We could search their support center online, which has everything from product manuals to FAQs. To speak with customer support directly, we could contact them through live chat, email, or phone toll-free 24/7. We’re impressed that their customer support line is always available- this is not the case for many security companies. When we were having issues livestreaming footage on the app, phone support was quick and helpful, so overall we’re satisfied with their customer support.

All in all, we’d only recommend Swann to those that want a very basic, self-monitored security system. This could work for businesses or outdoor use, as two-way audio is less of a necessity in these scenarios. But for the majority of the people looking for smart home security cameras, Swann just doesn’t cut it. Below, we broke down exactly who I think Swann would be good for.

But avoid it if you want…

With so many options, those who want a completely hands-on security system will definitely find something they like from Swann.