Banned from use in the U.S government, Kaspersky has to be the most controversial VPN we’ve ever tested, but with some objective testing, we found out whether it’s dangerous or not. 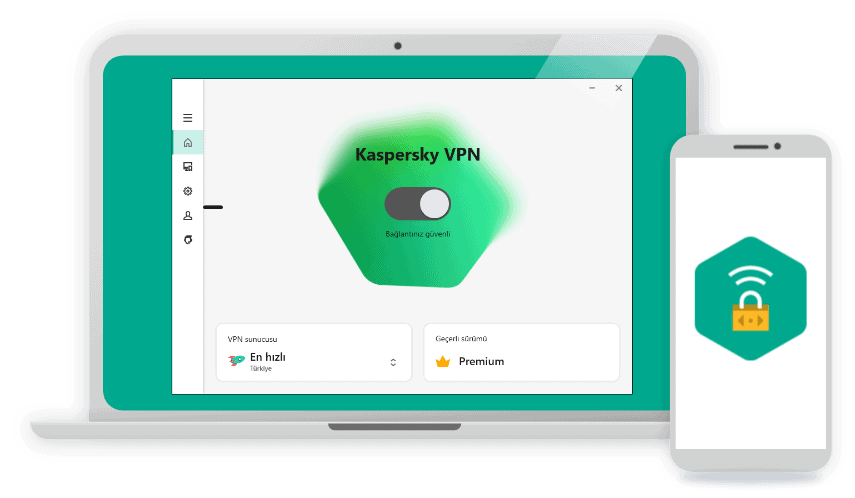 This Russia-based VPN won't be forced to share customer data with any foreign governments, so you can feel safe connecting to any of its 2,000 plus servers.
View Plans
Contents: Features We Loved Features That Need Work The Bottom Line
View Plans

Kaspersky may be a name you recognize from the evening news. Banned from the U.S government, we didn’t let this stop us from testing out their VPN. But can we really trust a VPN that’s legally banned from government devices? Keep reading to find out.

Why You Should Use Kaspersky VPN

Let’s start with the positives, the things we liked most about Kaspersky VPN after testing it extensively.

After a recent update, the Kaspersky VPN works with:

Kaspersky’s more than 2,000 servers span 49 countries including France, Germany, Hong Kong, and Japan.1 While this isn’t the absolute largest network of servers that we’ve ever seen, it’s pretty impressive.

Based In Non-Member Country To Five Eyes

Although it has brought up several political issues, which we discuss in detail below, Kaspersky’s headquarters in Russia mean that it’s outside of Five Eyes jurisdiction. That means that Russia, or any country’s government, for that matter, can’t make Kaspersky give them customer’s data. If you want a VPN for privacy, this non-membership is a necessity.

Did you know that 86 percent of people would be fairly or very likely to cut off all ties with an organization if they used data in an unethical manner?2 Despite this, it’s highly unlikely that most people actually read the organization’s privacy policy on their website, but we’re not most people. Here’s the info of ours that Kaspersky kept:

But fortunately for us, Kaspersky did not keep the following data:

In a nutshell, Kaspersky kept our web activity and device IP addresses private, which was the main thing we were hoping for from their privacy policy. Check one!

Kill Switches on All Paid Plans

While their free subscriptions are a little different, which we’ll get into more detail about soon, all of Kaspersky’s premium plans include kill switches. If the VPN fails, it’s the kill switch that will shut down all web-related browsers and apps so that your ISP still can’t see your online activity.

Netflix on Paid Plans in U.S and U.K

Although Netflix didn’t work for all of Kaspersky’s servers, it worked well for us on their U.S and U.K servers. So, if you’re all binged out and have run out of your country’s Netflix, hop on over to the U.S or U.K servers to unlock huge libraries of content, different from your home country’s server.

If you think of our data as treasure, then 256-bit encryption is like a nearly indestructible lock on a treasure chest, the encrypted VPN tunnel. Fortunately, Kaspersky is up to date when it comes to encryption methods with AES-256, which governments and militaries around the world consider to be the best of the best.

Personally, we prefer to use dynamic IP addresses, meaning that every time we connect to Kaspersky VPN, we get a new one. This makes it much harder for hackers to trace our online activity, but some people may want to get a static IP address, the same one every time. No matter; Kaspersky allows for both options.

No DNS or WebRTC Leaks

We approach the world with a healthy amount of skepticism, so when Kaspersky’s website says that the VPN will hide our web activity and IP address, we knew we had to test it out for ourselves. Fortunately, after tests to find our DNS (domain name) and WebRTC leaks (private IP addresses), there were no leaks whatsoever. Learn more about how we test in our guide to VPNs.

Did you know that the average person in the U.S has visited four different countries? This number is even higher elsewhere, with the average U.K citizen hitting 12 different countries.3 Wherever you are, you’ll probably want to connect to a VPN before dipping your toe directly into a foreign and random public Wi-Fi network. And for those with tons of frequent flyer miles, you’ll be happy to hear that Kaspersky let us switch servers as many times as we wanted. This was also ideal when we were checking out streaming sites in other countries, because sometimes the U.S version of Netflix just doesn’t cut it.

While the Fast Free VPN— Kaspersky Secure Connection app for Android has a 4.3 rating, the Secure VPN & Proxy— Kaspersky iOS app is even better with a 4.7 out of five stars. We didn’t run into any issues connecting to Kaspersky on either app, and their Mac and PC apps worked seamlessly as well.

It was nice to be able to try out Kaspersky’s premium VPN for seven days without paying, but if you never want your free trial to end, Kaspersky also has a separate, free VPN app that you can use forever. However, it comes with some limitations, which we’ll cover below.

Our Kaspersky VPN costs page goes over the nitty gritty of their payment options, but in sum, you won’t be paying much, either $2.50 or $4.99 a month after the free trial of the premium version runs out. Of course, you can always use the completely free app indefinitely, if you’re okay with its limitations!

Note: Although it’s billed at once as $29.99, Kaspersky VPN’s one-year option is the most affordable, breaking down to $2.50 a month compared to $4.99 a month with the flexible subscription option.

Why You Shouldn’t Use Kaspersky VPN

That’s it for Positive Polly. Bring out Negative Nancy, her evil sister who just wants you to be really well-informed about the Kaspersky VPN. Really, who can blame her?

A lack of split tunneling isn’t going to be a dealbreaker for most people. However, if you need to access your VPN and the public Wi-Fi network directly at the same time, then Kaspersky is definitely not for you.

Also not a dealbreaker for most, Kaspersky only encrypted our data once through a single server, whereas some encrypt it multiple times through multiple servers, a process called multi-hop.

Need Multi-Hop: Some VPNs with multi-hop that we’ve tested out include NordVPN, Surfshark and Windscribe.

Looking for a VPN for Windows? Or, more specifically, maybe you’re a Windows-user who wants a VPN for gaming. If that’s the case, we’d steer clear of Kaspersky. In our speed tests, our latency increased 3,100 percent from four ms to 128, certainly a large jump indeed.

Unfortunately, we could only connect five devices total to Kaspersky, and there was no way to increase this number, either. While that may be enough in terms of simultaneous connections, we wish the overall limit wasn’t this small.

Kaspersky is a bit confusing when it comes to their free trials versus the free version of their app. While their VPN with a free trial is the premium service with all of the features for seven days, their totally free VPN had limits on:

Despite these limits, you can get a pretty good idea of Kaspersky’s service with the free trial or the free version.

Kaspersky is one of the more controversial digital security companies, and although they haven’t been convicted of a crime in the U.S, that doesn’t change their public perception. Of course, the company is innocent until proven guilty in the eyes of the law, but we thought we’d give you all of the basic information so you can decide for yourself.

Want to Learn More?: Kaspersky’s Wikipedia page is a great source of information about the company, but make sure to check the actual primary sources linked in the footnotes to learn more.

Personally, we don’t consider either of these events to be deal-breakers but again, that’s for you to decide yourself.

We certainly recommend the Kaspersky VPN overall, as it gets the job done in terms of protecting our data and not keeping it for themselves. The only people we wouldn’t recommend it to are Windows-users or gamers, given the large amount of latency on Windows. However, be sure to test it out yourself by taking advantage of the free trial or the free app.

This review pretty much covers everything you should know about our experience with Kaspersky, but should you have additional questions, check out our answers to these frequently asked questions.