A closer look at one of the most rugged security cameras from the Reolink brand. 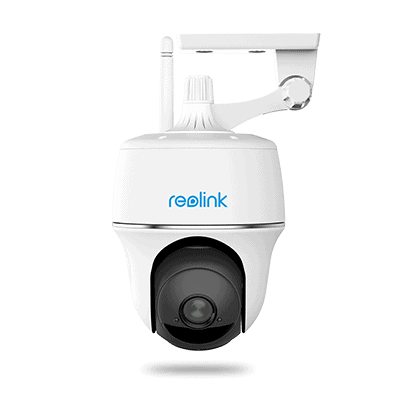 Reolink flies under the radar, but the company has delivered a durable security camera in the Argus PT. It’s not the best in terms of battery life, but accessories like the new Reolink solar panel are available for more convenient usage.
View Packages
Contents: Design Strengths and Weaknesses Installation App Video Review Recap
View Packages

Since 2009, Reolink has given “plug and play” a whole new meaning with its wire-free security cameras. In this review, we’ll be taking a look at the Reolink Argus PT, a pan-tilt camera that’s completely wireless and delivers an expansive field of view. From design to the mobile app, we cover everything there is to know about the Reolink Argus PT.

Here’s some intel you might be interested to know: Reolink recently announced the KEEN Ranger PT, a “trail camera” for use in the great outdoors. It works on batteries and a cellular panel and it uses 4G cellular data to connect to the internet. The KEEN Ranger PT’s design is based on the Argus PT, which highlights just how durable the Argus PT is.

Do It for the Aesthetics

When we first laid our eyes on the Reolink Argus PT, we couldn’t help but notice that it was a bulky camera, and a conspicuous one at that. With a 335-degree pan and 140-degree tilt, it’s a camera better suited outside, where there’s more to see than inside.

The IP rating — the level of protection against a solid object or liquids from various weather conditions — is 64, so it’s protected from water spray from any direction (i.e. rain) and completely dust-tight. The Reolink Argus PT can withstand temperatures between —14 degrees to 131 degrees Fahrenheit, making it a good choice for warmer climates than colder ones.

We also noticed that the camera has a power switch, which we don’t come across very often with other security cameras. Some caveats: the battery wasn’t removable, which meant that we had to take down the camera to charge it, and it didn’t have a long battery life. A one full-time charge lasted between one to four weeks in normal use, which isn’t very long.

In contrast, in our Ring Spotlight Cam Battery review, we noted that their camera has a battery life of six to 12 months, which is the standard. For the Reolink Argus PT, we’d recommend using the Reolink Solar Panel, which was what we did to avoid the hassle of taking down the camera to recharge the camera on a regular basis. Rather, the solar panel charges continuously, making for no downtime whatsoever.

Tip: While the Reolink Solar Panel is optional, we think the addition will make life so much easier. With the panel, you don’t have to manually take down the camera to recharge the battery, especially since there’s no removable battery pack. The Reolink Argus PT stays fully charged day in and day out with the Reolink Solar Panel.

Here’s where we start to get into the thick of things. For the most part, the Reolink Argus PT left quite the impression, but that’s not to say it’s without its flaws.

Overall, the Reolink Argus PT offered a strong set of features. It’s also on the more affordable side compared to Reolink’s other cameras, such as the Reolink GO solar-powered camera. To learn more, read our Reolink GO review. Also, be sure to check out our Reolink pricing page for a broader overview of Reolink cameras and their costs.

Equipping Our Home With the Reolink Argus PT

While the Reolink Argus PT is both an outdoor and indoor camera, we wanted to make full use of the camera’s pan and tilt feature, so we decided to set it up in our backyard. To start, we charged the camera first before turning it on. Like most security camera setups, we downloaded the companion mobile app and followed the on-screen instructions. We added the device, scanned the QR code on the bottom of the Reolink Argus PT, and voila — the camera was ready for mounting.

With the Reolink Argus PT, we turned the camera upside down and installed it about two to three meters off the ground. Before that, we screwed the mounting bracket to the wall and then attached the camera to the bracket. But wait, there was more! As a bonus, we purchased the Reolink Solar Panel and set that up right next to the camera. We made sure that there was enough sunlight directly hitting the panel so that the Reolink Argus PT was always fully-charged. According to the Solar Energy Industries Association, there are now 81 gigawatts of solar capacity installed nationwide, which is enough to power 15.7 million homes.1 Lucky for us, it’s mostly sunny where we live.

Tip: Don’t attach the antenna to the Reolink Argus PT until you’ve mounted it up! Doing so would make the antenna get in the way of mounting the camera securely.

Did you know that in the second quarter of 2020, there were approximately 37.8 billion app downloads combined from the Apple App Store and the Google Play store?2 These numbers don’t surprise us, especially when most of the security cameras that we’ve reviewed have a companion mobile app. Reolink is no different.

The Reolink app gets three out of five stars on both Google Play and the App Store. That’s not a bad rating, but it’s also not great when there are security camera apps like Nest and Ring that average more than four stars. Lucky for us, we don’t just rely on user reviews. We tested the app ourselves and it was mostly good. It was user-friendly with familiar icons and easy navigation.

We could’ve also downloaded the Reolink software on our computers, but we preferred to use the mobile app. That said, not very many security brands offer PC-compatible software that allows access to their security cameras, so we appreciated the alternative option, especially for those who’d rather view footage on a bigger screen.

There’s no better way to decide if a camera is right for you than to see its video quality, audio quality, and night vision. Watch our video review of the Argus PT below.

As it stands, the Reolink Argus PT is an affordable outdoor and indoor camera, priced at $167.99, with a bunch of features to tickle your fancy. We liked that person and vehicle detections were included with the camera rather than part of a separate monthly subscription. This helped reduce the number of false alerts on our phones. On top of that, we really enjoyed scheduling when to receive alerts. The short battery life, however, was not a shining moment for the Reolink Argus PT.

All in all, the Reolink Argus PT holds a lot of weight for the affordable price tag. We loved the pan and tilt feature, which covered more areas of our backyard. Despite the growing competition, we’re confident that the Reolink Argus PT is a strong contender. If you need a primer on some similar cameras, be sure to check out our best wireless security cameras of 2023.