Find out if the SimpliSafe Video Doorbell Pro lives up to SimpliSafe’s reputation for quality. 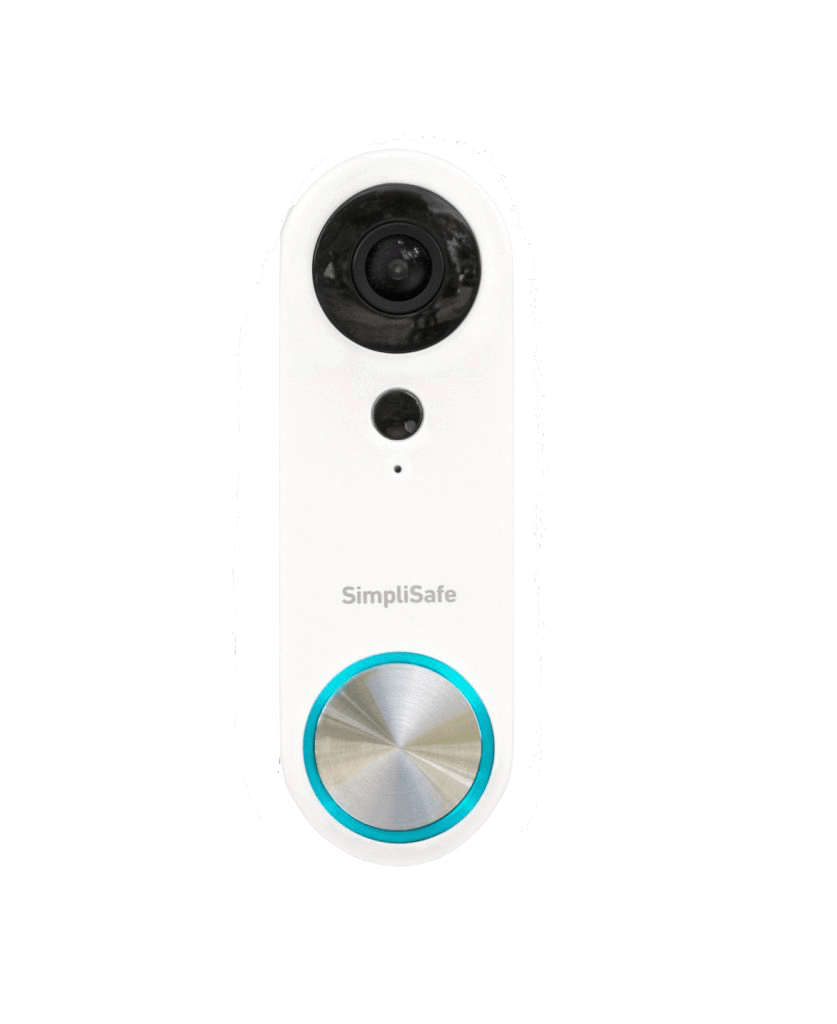 SimpliSafe adds two new features to its Fast Protect™ Technology, an essential part of the Interactive plan. The first feature is text alerts, which gives users an easier and more efficient way to cancel or confirm alarms. The second feature is critical alarms, which has the ability to bypass the silent and “Do Not Disturb” modes of iPhones and Androids when there’s an important alert coming from a SimpliSafe system. If a user opts-in, critical alarms will always come through.

Traditional doorbells are out. Nowadays, homeowners are opting for video doorbells, which are essentially doorbells equipped with a camera and are connected to the users’ smartphones over Wi-Fi. This technology allows us to check on our front doors anytime, and even see, speak with, and hear our guests.

Brands like Ring and Nest helped propel video doorbells to popularity, but these days, almost every security brand has its own version of a video doorbell. That includes SimpliSafe, one of the best home security systems and a favorite among renters thanks to its easy DIY installation.

Today, we’re taking a look at the SimpliSafe Video Doorbell Pro, a wired doorbell that works seamlessly with SimpliSafe security systems. Does it have what it takes to compete against the bigger video doorbell brands? Let’s find out.

A Look at Design

A lot of homeowners prefer wireless video doorbells because they’re easier to install, but if you’ve ever had experience setting up SimpliSafe, you know that making easy to install products is one of the company’s main goals.
Although the SimpliSafe Video Doorbell Pro requires hardwiring, it’s still pretty easy to set up. All we needed for DIY installation was our trusty Philips head screwdriver, a Wi-Fi connection, and a little bit of patience.

First off, we hardwired the SimpliSafe Video Doorbell to our existing doorbell. Again, our current setup is supported by the video doorbell, so we didn’t need to use adapters. If yours isn’t compatible, however, you’ll need a 16-volt AC transformer, which you can buy from SimpliSafe prior to installation.

For the most part, the installation was painless. We followed the instructions step by step, and within minutes, the SimpliSafe Video Doorbell was up and running. Once we wiped the sweat off our brow, we moved on to the next step.

We downloaded the SimpliSafe Home Security mobile app and activated the doorbell which took about five minutes. For us, it was an easy process because we’re veterans when it comes to hardwiring. That said, this setup might be difficult for newcomers but with patience and a number of guides, the process shouldn’t be too challenging. Again, there is always professional installation available as an alternative to DIY!

All in all, though, SimpliSafe struck the perfect balance here. SimpliSafe focuses on easy-to-use and simple equipment, and even though the hardwired installation made the video doorbell a bit harder to install, it also made the device a set-and-forget kind of tech. You’ll never have to replace batteries, unlike with wireless video doorbells. So as long as you can soldier through the installation process (which was still a breeze in our opinion), the SimpliSafe doorbell is easy to use once it’s set up.

Did You Know: Wired security systems and cameras are less susceptible to interference from wireless signals such as radios, which prevents lost Wi-Fi connection. What’s more, wired video doorbells are harder to steal than wireless!

Let’s take a closer look at the key features of the SimpliSafe Video Doorbell Pro and how it improved our home security and daily lives.

Of course, you could monitor live feeds yourself for free, plus, if there’s someone at your door, you’ll get a notification so you can fire up the app and watch live. The video doorbell won’t record anything, though, without a cloud plan. As we mentioned earlier, cloud recording costs $10 per month for up to five cameras.

But the best option for SimpliSafe Video Doorbell Pro users with a SimpliSafe security system is the Interactive plan that costs $27.99 per month. Now, before the price puts you off, hear us out. The Interactive plan includes professional monitoring of the SimpliSafe system (but not cameras and doorbells), which means it’ll alert SimpliSafe’s partner monitoring center of emergencies. You’ll also get police, medical, and fire emergency dispatch. On top of that, you’ll get cloud storage for 10 cameras. And last but not least, it includes video verification, which utilizes your SimpliSafe cameras to speed up police response.

SimpliSafe is actually focusing on a new feature called Fast Protect™ Technology, which is an expansion of the video verification feature. Whenever there’s an alert, as long as you’re on the Interactive plan, SimpliSafe will use your cameras’ live feed to verify the alarm and speed up police response.

Two new features were recently added to Fast Protect™, namely, alert texts and critical alarms. The former utilizes text messaging to instantly alert users to potential emergencies and give them an efficient way to confirm or cancel alarms. The second feature, critical alarms, ensures that homeowners get important alerts from SimpliSafe on their phones, even if their smartphones are in silent or Do Not Disturb mode. If the user opts in, the SimpliSafe app bypasses those modes to get important alerts pushed through.

As far as local storage goes, SimpliSafe’s doorbell camera doesn’t have any. Rather, our only option was a paid subscription, again, around $10 a month for up to five cameras or $28 a month for up to ten cameras.

That pricing isn’t exactly offensive. Both of those plans feature unlimited cloud storage. Still, SimpliSafe does run on the slightly pricier end compared to Ring’s monthly fee. Ring Protect plans either cost $3 per month or $10 per month for 60 days of cloud storage. If you want professional monitoring for Ring Alarm as well, the price goes up to $20 per month, still lower than Simplisafe Interactive plan.

Money Saver Alert: If you’ve already signed up for the professional monitoring plan from SimpliSafe, unlimited cloud storage is included for free.

We dread contacting customer support for any reason, but connecting with SimpliSafe representatives wasn’t as bad as we thought. Before that, though, we should mention that there are a number of ways we sought answers for any questions or issues we ran into while using our SimpliSafe Video Doorbell Pro.

The company offers phone support, forums, email contact forms, user manuals, and a help center. All of these provided useful information. A quick Google search also helped us navigate around SimpliSafe’s website with links that directed us to its support pages.

What we found most helpful when we called a SimpliSafe customer service representative was the extended hours, which lasted until midnight EST. For those late nights when we’d come home and needed immediate responses, we were grateful for SimpliSafe’s late hours of operation.

The representative we spoke to, Dave, answered our questions — like why the SimpliSafe Video Doorbell Pro stopped streaming one time. Dave clarified that if the LED color was yellow, it meant that a firmware update was in progress. That explained everything. He communicated patiently and didn’t sound the least bit tired during our 11:15 PM phone call.

While it took some time to get connected with Dave, we were satisfied overall with our experience.

Recent data reports indicate that people use mobile apps 90 percent of the time over mobile sites,2 so it’s no surprise that many home security brands have created their own mobile apps to complement their products.

With the SimpliSafe Home Security app, we saw live footage of our front porch. While there was a little bit of lag, we panned and zoomed in, and the video quality remained crisp. There were two simple features with the live video: record and microphone. We recorded and saved our footage to the event history to review later. As for the microphone, we just had to tap on the little icon to speak to any visitors or delivery folks at our front door.

One little qualm we have with the app was that it wasn’t very robust. There were very few settings we could play with, although we were able to adjust the motion detection sensitivity, check the Wi-Fi signal on our video doorbell, and adjust a few other settings.

On the bright side, it was the same app we used to control and access our SimpliSafe home security system. It certainly made it easier to manage our home security.

To sum everything up, the SimpliSafe Video Doorbell Pro served its purpose for the $169 price tag. We enjoyed a handful of features, including the 1080p HD video with HDR, person detection, and 162-degree field of view. Whether it was better visuals or artificial intelligence that reduced the number of notifications on our phones, we applaud SimpliSafe for keeping our frustrations to a minimum.

That said, we were disappointed in the lack of smart home integrations and the lack of a wireless setup. Not to mention that the monthly monitoring subscriptions are kind of expensive in our book, although the cloud storage only plans are reasonably priced.

Who We Recommend the SimpliSafe Video Doorbell Pro for:

Who We Don’t Recommend the SimpliSafe Video Doorbell for:

SimpliSafe has become a household name in the home security industry, which is expected to be worth $2.05 billion by 2023.3 We’ve come across our fair share of video doorbells, and while the SimpliSafe Video Doorbell Pro didn’t receive a perfect score from us, it did check off a lot of our boxes.

Still have questions about the Simplisafe Video Doorbell Pro? You’re in luck. We’ve taken the time to answer some of the ones we hear most frequently.