VyprVPN is one of the most popular VPNs out there—this plan breaks down their subscription options so you can be fully informed. 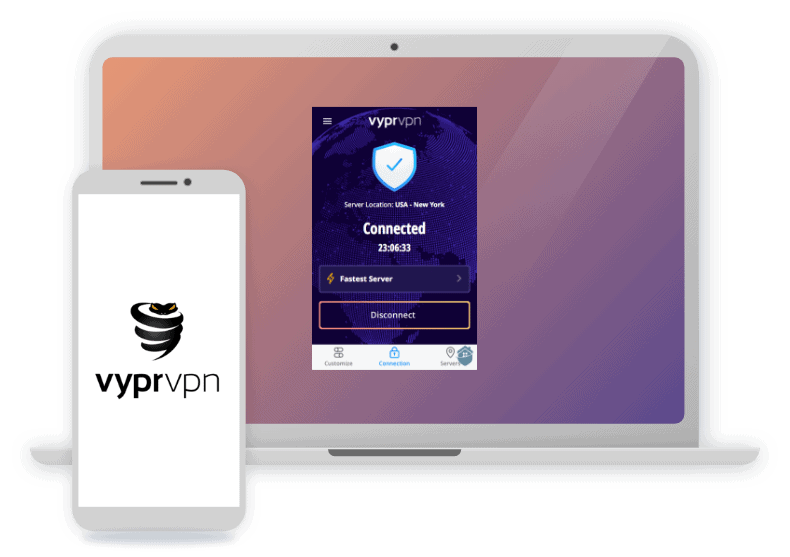 Here at Security.org, we review just about every VPN out there so that you can figure out which one offers the best features for your lifestyle. But we’d be remiss not to focus on pricing, which is a major part of the decision-making process. After all, there’s a reason that we never include a price tag when we email our moms some suggestions for what she could buy us for our birthdays! Below, we’ll go into precise detail about exactly how much you’ll pay for VyprVPN.

The Best that VyprVPN Has to Offer

We go into full detail about the service’s offerings in our VyprVPN review. But if you’re in a hurry (we don’t judge, here!), these are some of our favorite features that VyprVPN offers:

Do They Have a Free Trial?

We love a free trial. It’s like a free sample of ice cream or tomato sauce or weird, gluten-free crackers at the grocery store. Except it’s like if that ice cream or sad cracker protected your entire digital identity and activity. Not bad, for a cracker! Unfortunately, VyprVPN does not have free ice cream samples, or a free trial. However, they do offer a 30-day money back guarantee. So, it may be a little annoying, but we found that it was worth putting the money down to really test out our compatibility with the service.

Okay, so no free trial. We can get past it, but now the information on subscription costs feels even more critical to know. Here’s how the pricing breaks down for VyprVPN:

Unlike some of the other products and services that we write about, VPNs don’t typically have tiered subscription models. You won’t see any comparisons between a “Premium” versus a “Gold Standard” versus a “Supreme” membership. Instead, the way that providers like VyprVPN create different cost levels is through the length of the plan that you choose.

Good To Know: There are some completely free VPNs out there, as we’ve detailed in our Youtube reviews. But the services available aren’t typically as good as the paid VPNs. Like we always say, it’s up to you how much you’re willing to risk for a deal.

Paying annually or every two years does mean a higher total amount when the bill comes around, but when you break it down, it’s a much cheaper rate. VyprVPN’s annual price is a good deal, but the monthly plan is a little pricier than we’ve seen elsewhere (we’ve done dozens of VPN comparisons between specific companies). Still, we tend to recommend shorter plans for people who have never tried a VPN before.

Gabe always likens it to coffee. We’d never walk into a new coffee shop and buy 10 pounds of their most popular dark roast beans right off the bat. No, we’d go in at least once and buy a cup of coffee first, to see if we like the flavor. On the other hand, if it’s a brand we’ve had before, maybe we’ll splurge for the beans to save money overall making coffee at home. Has this metaphor gone too far? Basically, pick the plan that makes the most sense for you.

In addition, VyprVPN offers a Business plan that includes multiple user management, global business servers, and a dedicated account manager. The Cloud option gives users their own dedicated server and IP address with a secure access point. VyprVPN for Business starts at a price of $299 per year, while VyprVPN for Business Cloud starts at $349 per year. If you need us, we’ll just be over here planning a PowerPoint presentation to get our bosses in on this.

There’s nothing worse than finding a product we like, deciding we will purchase it, and then realizing they only take Bitcoin, or something weird. So just to be safe, here are all the ways to pay for VyprVPN, so that doesn’t happen to you!

What Comes With a Subscription?

If you’re still curious about what VyprVPN offers, don’t worry. Let’s go through the basics and make sure everything checks out, why don’t we?

Not Alone: Aliza may be the only one spiraling out over Cristina Yang’s departure from Grey’s five years later, but she’s not alone in wanting to stream on a VPN. One of the main reasons that some users connect to a VPN in the first place is for access to media or content not available in their home country, such as international streaming services like Netflix. VPN users are everywhere, as we recently broke it all down in a VPN consumer study.

VyprVPN also offers something unique compared to most other companies we see out there, which are their VyprVPN for Business and VyprVPN for Business Cloud. We actually wish more places offered options like these that will cover an entire office or group of employees, as it would be well-used here in the Security.org headquarters. Professionals like journalists, entrepreneurs, traveling workers, and more could benefit from corporate VPN offerings.

What if I Want to Cancel?

We get it. It’s a question we ask ourselves every week, when another New Yorker magazine shows up on the stoop, even though we never even touched last week’s issue. What if I want to cancel? With VyprVPN, it’s simple—you cancel. If we cancel within 30 days of signing up, then it’s covered by their money-back guarantee. And yes, a lot of companies say that, but we’ve found that this process is actually pretty simple. All we had to do was log into the control panel, click on the account tab on the left-hand side of our screen, and then under “services” and VyprVPN, click the thing that says “cancel service.” Canceled.

Please Note: If you sign up for an annual or two year subscription, make sure you cancel before 30 days are up if you want a full refund. Canceling the service after a few months will mean a pro-rated refund, as they’ll make sure to charge you for the time you already used.

When looking at a monthly subscription, VyprVPN is on the pricier side compared to other popular VPNs (it’s much more of a steal price-wise for the annual and two year plans.). And the service doesn’t necessarily include any of the premium additional features that might help justify a steep price tag. However, VyprVPN supports its VPN protection with the major reassurance that is a solid privacy policy with no traffic logging, and a safe international headquarters location. Its app is simple, easy to use, and includes the latest technology, such as WireGuard, and unique options such as its Chameleon protocol.

Sometimes we just need a VPN to be a VPN. For the Internet users looking for something simple and stable, VyprVPN’s annual plan is definitely worth it. But for those who may need more bells and whistles, or are looking for cheaper options, it might be worth checking out some other top VPNs.

There’s nothing we love more than sharing our expertise on VPNs and all things digital security with questioning users. Here are some questions we’ve been getting a lot lately.