This hardwired doorbell camera is great if you already have an existing doorbell setup. 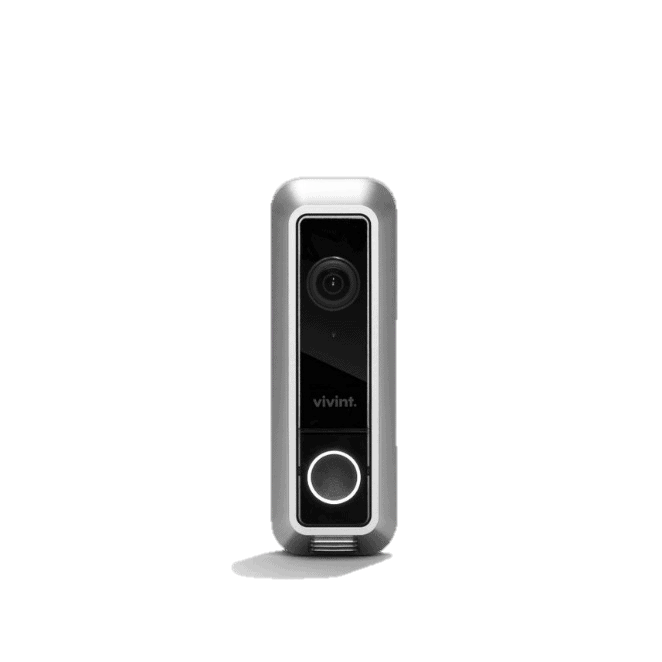 If you already have the Vivint security system, then the Doorbell Camera will take things to the next level. You'll be able to see and speak to visitors as soon as your doorbell camera detects them or if they press the doorbell or knock, your choice!
View Packages
Contents: Design Features Installation App Recap
View Packages

Vivint is known for its top-of-the-line devices and the Vivint Doorbell Camera is no exception. Get yours today.

To make sure you’re in the right ballpark, we’re going to break down the key pros and cons of the Vivint Doorbell Camera.

First of all, we loved that we could hardwire the Vivint Doorbell Camera into our existing doorbell setup or power it using batteries, in which case, it would have a life of three to five years. In terms of features, our favorites were its person detection, which is essential for smart notifications, the 180-degrees field of view, and the Alexa and Google Assistant integrations. Also, we appreciated that Vivint had the option for the camera to record continuously, although this feature required the $249 Vivint Smart Drive, so it’s both a pro and con.

Upon first look, the Vivint Doorbell Camera wasn’t the most attractive video doorbell we’ve seen. While we’re usually fans of sleek and modern designs, the doorbell looked a bit outdated and overly detailed with the number of lines around the camera. However, it’s pretty slim, measuring only 1.5 inches wide, so it fits our door frame easily. In comparison, the Ring Video Doorbell 3 we tested measured 2.4 inches wide, almost a full inch wider than the Vivint Doorbell Camera.

Another advantage of the Vivint Doorbell Camera? You can either hardwire it into your existing AC or DC doorbell set up or use a battery. If you choose the latter, the battery will last a whopping three to five years, which is a really long time, and Vivint’s app will alert you when the battery gets low. Keep in mind, though, that a number of different factors can affect the doorbell’s battery life, such as the amount of activity it detects, frigid temperatures, and how often it records or live streams. We chose to hardwire the doorbell camera, which meant that we didn’t have to worry about it getting low on battery.

When testing security cameras and video doorbells, we use the Necessary Features Test to test categories such as video, audio, night vision, and more. How did the Vivint Doorbell Camera stack up?

Right off the bat, we’re disappointed that the Vivint Doorbell Camera only had 720p HD, less clear than the current industry standard of 1080p HD. However, we did like that we could zoom in and pan digitally, plus the camera’s field of view was the widest possible at 180 degrees. It captured our entire doorstep and then some.

Naturally, the Vivint Doorbell Camera had two-way audio so we could speak to our guests as well as see them through the Vivint app, a standard feature for video doorbells. The audio quality was okay; we could hear our guests and they could hear us. However, the doorbell didn’t have noise cancellation, unlike some of Ring’s budget-friendly video doorbells, so it got hard for us to hear our guests when cars passed by. Since our Brooklyn apartment’s front door is only a few feet from the street, we had trouble communicating with guests at times.

The camera also has infrared night vision from two LED sensors, which we really prefer over color night vision from a bright white light. Infrared is a lot less conspicuous, which, when we were recording people at night, was clearly a good thing. Another commendable thing about the Vivint Doorbell Camera was its ability to pick up images even in low-light conditions. As you can see in the picture above, it managed to capture the face of our Chief Editor, Gabe, with the help of streetlights and the faint indoor light emanating from our decorative door glass.

When it comes to any home security camera, be it in a doorbell or otherwise, we want to make sure we’re backing up our footage in at least two ways. That way, if one of the ways fails, we have a fallback. Although the Vivint Doorbell Camera lacked a micro-SD card slot for direct local storage, Vivint let us store 30-second event clips in the cloud for 14 days. It cost us $5 per month for each camera. That was on top of the $39.99 a month we were paying Vivint for professional monitoring. You can learn more about Vivint’s monitoring plans here.

Now, if you’re looking for local storage, which you can use as a backup to cloud storage, you can invest in a $249 Vivint Smart Drive. The advantage of the Vivint Smart Drive is that it can store videos for up to 30 days, and instead of just event videos, it records continuously. It connects to Vivint cameras over Wi-Fi, so it’s wireless, and you can also transfer video files to computers wirelessly for longer storage.

As we’ve detailed in our Vivint security system review, the entire Vivint system, including the Vivint Doorbell Camera, works with Alexa and Google Assistant. One of our favorite features included in these integrations was the ability to live stream footage on our smart TVs or displays. We could simply say “Alexa, show me the doorbell camera,” or “Hey Google, show the front door camera on the living room TV,” whenever we wanted to check our front door without getting up.

Doorbell cameras are fun to use and all until you start receiving lots of false motion alerts from cars, animals, and other moving objects. One thing we loved about the Vivint Doorbell Camera was that it came with person detection built-in, meaning it could tell the difference between people and other moving objects. Thanks to this feature, we only received motion alerts when there were people at our door. That led to fewer but more important notifications, which made our life a lot easier, especially since we live on a moderately busy Brooklyn street.

Unlike video doorbells from brands like Nest and Ring, you can’t just walk into a store to buy a doorbell camera from Vivint, whether it’s this Vivint Doorbell Camera or the newer Vivint Doorbell Camera Pro. Rather, you need a Vivint security system to go with the doorbell, or if you already have a Vivint system, you need to buy the doorbell camera from Vivint directly. Either way, Vivint requires professional installation, which is now free, but it used to cost $129.

The installation process was extremely professional. We scheduled a date, the technicians arrived and proceeded to install our Vivint system and video doorbell. After that was done, they gave us the chance to ask any and every question we had about the system. They even left us a direct number that we could call if we had additional questions or concerns moving forward. Installing a video doorbell doesn’t get easier than that.

Aside from the Vivint touchscreen control panel, our main access to the Vivint Doorbell Camera was through the Vivint Smart Home app. It was through this app that we talked to visitors at our door, monitored event clips that our doorbell camera recorded, and tinkered with our camera settings. It was super convenient to use; whenever someone rang our doorbell, we received a notification on our phone. From there, we simply tapped the notifications to pull up a live video and audio feed from our doorbell camera. It’s no wonder that the Vivint Smart Home app has one of the highest ratings among home security apps. Currently, it holds a 4.4-star rating on the Google Play Store and a 4.6-star rating on the App Store.

Recap of the Vivint Doorbell Camera

However, if Vivint’s doorbell cameras don’t tickle your fancy, you can always go with another brand. If you do, you’ll need to monitor your video doorbell using its own app instead of the Vivint Smart Home app, but at least you’ll get your pick of features. To learn more about other options, find the best video doorbell camera for your home.

Since Vivint offers professional installation only, we didn’t have to lift a finger to get the Vivint Doorbell Camera up and running. Schedule your appointment.