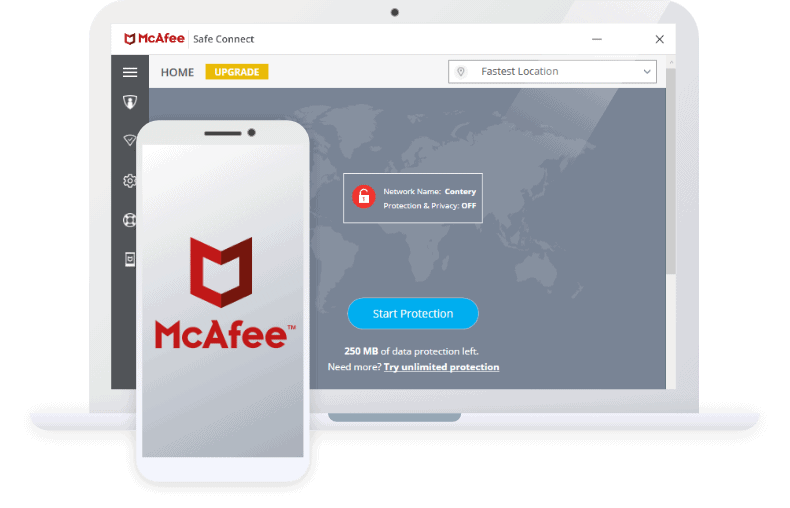 McAfee has been building cybersecurity products for years, from antivirus software to PC optimizer tools. Recently, the company decided to package all its products together into one subscription plan: the All-in-One Protection Advanced.

Even though the subscription includes all of McAfee’s products, it’s still nice to know how each individual product works. That’s what we’ll be doing today with the McAfee Safe Connect VPN, focusing particularly on its cost and value.

How Much Does McAfee Safe Connect VPN Cost

Five licenses of the McAfee Safe Connect VPN are included in every Premium and Advanced plan, which cost $49.99 and $89.99 in the first year, respectively. However, both packages include a number of other McAfee products.

If you want just the VPN, you can purchase five licenses for $39.99 for the first year, which works out to about $3.33 per month. That’s not a bad price. However, after the first year, the cost will increase to $47.99 or about $4 per month, which is still affordable.

Don’t want to pay anything at all? McAfee has a completely free VPN available, with two caveats:

This isn’t a half-bad deal for a free VPN! But for most people, one device won’t cut it, nor will this data limit. To see how much 250 GB really covers, use this data calculator from Verizon.1 Or, to learn more about how VPNs use data, read our page on VPN data consumption.

One of the biggest advantages of buying All-In-One Protection Advanced or Premium rather than just the VPN on its own is that it lets you use the VPN on unlimited devices. If you’re looking for a VPN for your family, chances are that five devices won’t cut it, so it might make sense to go with the plans that offer unlimited VPNs. The All-In-One plans also include lots of useful extras, such as:

Pro Tip: Need a VPN for more than five devices? If you sign up for the Total Protection Ultimate Plan, that limit will double to 10.

The other option to get a VPN bundled with other digital security is LiveSafe, which covers an unlimited number of devices for a year for $39.99. However, the VPN is only available if you select auto-enroll, meaning you’re actually signing up for two years for a total of $79.98. LiveSafe also includes:

This is by far the best plan available; at only $5 a more for the first year, you’ll get a VPN for unlimited compared to five devices, plus a ton of other important digital security features.

Our McAfee VPN review has all of the details about our testing, but here’s a summary of what we liked the most.

Speaking of, let’s go deeper into that 30-day money-back guarantee. If you’re an individual, annual user as opposed to a business user, you can get a refund within 30 days of your original purchase. Even if your annual subscription automatically renews itself, you can cancel it and get a refund within 60 days of that second charge. However, this guarantee does not apply to monthly subscribers, as these subscriptions don’t renew automatically. It also doesn’t apply to customers from the Netherlands, for whatever reason.

We think that McAfee Safe Connect VPN is worth buying, either on its own or as part of a package. At around $4 per month, it’s an affordable VPN. Plus, with McAfee’s stellar reputation, there’s no doubt that Safe Connect is a solid cybersecurity tool.

That said, pairing it with other McAfee products yields more benefits than buying it individually. The VPN is basically a freebie of any All-In-One Protection plan, so not only will you be securing your online privacy, you’ll also be improving your overall digital security.

Figuring out McAfee’s VPN pricing is like falling down a rabbit hole, but we’re proud to say that we’ve reached the bottom. That being said, if you’re left with questions, we’ll leave you with some answers.